Prince Christian of Denmark, 16, will move to the country’s first co-ed school that prides itself on educating the ‘whole’ person after he and sister Princess Isabella were pulled from scandal-hit boarding school

The Danish royal family have moved the heir-to-the-throne from a prestigious elite boarding school to a more modest establishment on the outskirts of Copenhagen.

Prince Christian, 16, was pulled out of the elite Herlufsholm Boarding School in June after allegations of sexual and physical abuse surfaced in a documentary. His sister Isabella, 15, was also due to attend, but her parents pulled her out too.

The Danish crown have now announced which schools the two royals will attend in its place.

Christian is set to go to the innovative Ordrup Gymnasium, in Gentofte, while his sister will attend Ingrid Jespersens Gymnasieskole, in the city.

It is understood that both Christian and Isabella will remain at home with their parents while they attend their new schools. 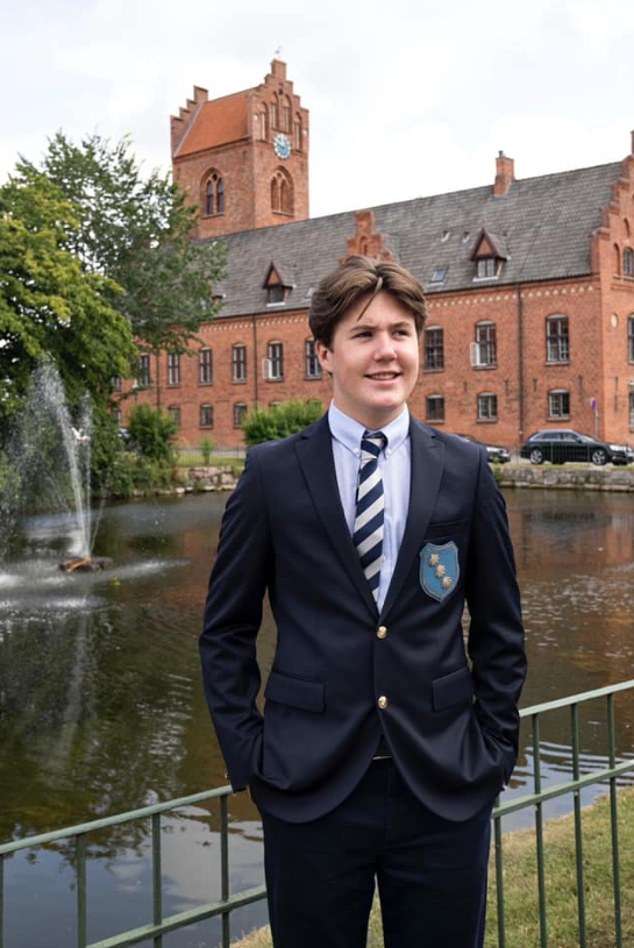 The Danish crown have now announced which schools Prince Christian, 16 and Princess Isabella of Denmark, 17, will attend in September after they were pulled out of their prestigious boarding school when allegations of sexual and physical assault against pupils was going on

‘After the Crown Prince’s family’s deliberations during the summer, a decision has been made about the coming school year,’ a statement revealed.

Christian’s new school was founded in 1873 by HC Frederiksen (called Friser), who wanted to move away from the traditional teaching methods of his time.

The school, which offers several clubs, including elite sports clubs, was the first one to introduce co-ed teaching in Denmark and is considered an innovative institution.

The core values at Ordrup are to encourage ‘curiosity’ among its students, as well as ‘cooperation and respect’. 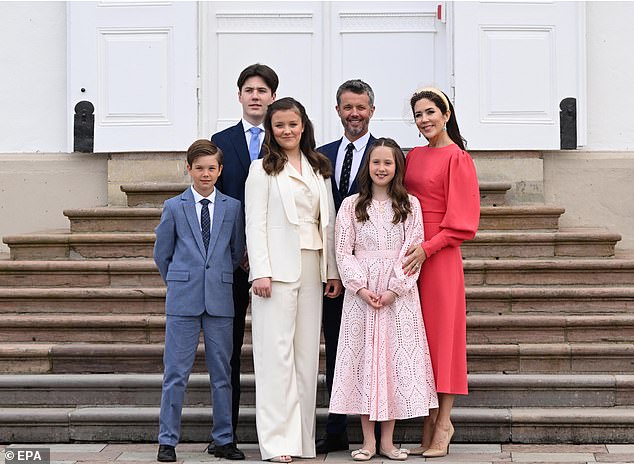 Princess Isabelle, centre, is due to attend a prestigious private school in the centre of Copenhagen 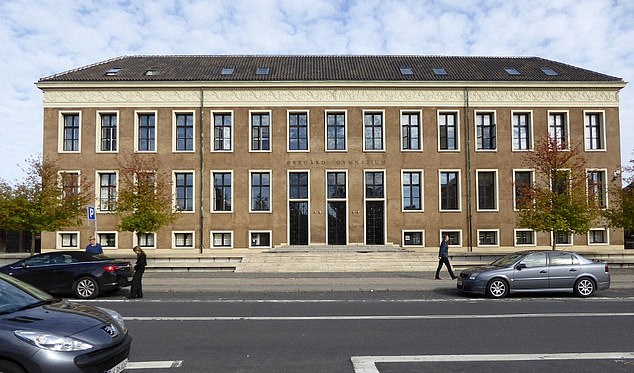 Christian is set to go to the innovative Ordrup Gymnasium, in Gentofte, near the capital, which was the first co-ed school in Denmark

Frederiksen also promotes the idea of ‘personal school,’ where the programme is tailored to each student in order to help them thrive.

The school also operates at a high academic standard, even though its national ranking is not known. However, it was plagued with threats of closure in the 1980s, due to the fact there were too many high schools in the same region.

However, the school, which boasts it educates ‘whole’ people, survived and is now a flourishing institution.

Meanwhile, Isabella will attend Ingrid Jespersen’s private high school, which is known for its academic excellence.

The school, located right in the heart of Copenhagen, was ranked the fifth best in the country for the 2022 school year.

Pupils will enjoy an active student life, with several committees available to join.

Each year, a third of the school put on a musical at a professional standard, with students applying to be actors, singers, dancers or even costume designers.

Access to culture is at the heart of what the school offers and it organises several arts and theatre outings throughout the academic year.

And pupils at Ingrid Jespersen are particularly fond of the school’s Motivation Day, where it hosts several workshops, including fishing trip, board games, electronic music, and the shcool’s radio, Ingrid-Radio.

Princess Mary and Prince Frederik removed their eldest son Christian from Herlufsholm in late June after serious allegations of sexual assault and bullying were levelled against the establishment. 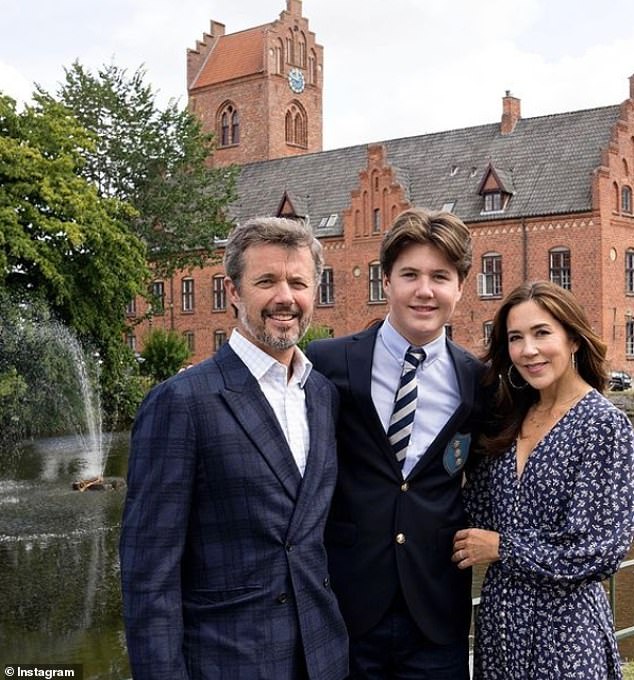 ‘The question about our son Christian’s and our daughter Isabella’s choice of school has been very important for us, and the unfortunate matter has brought many and strong opinions into play in the public,’ Crown Prince Frederik and Crown Princess Mary said in a joint statement at the time.

‘That is completely understandable when it deals with the well-being of children and young people. At the same time, it has been important to stand by our basic idea that major decisions must be made on an informed basis. We now have that basis.’

Herlufsholm Boarding School became the subject of a documentary that saw two former students describe their dealings with sexual assault and another of corporal punishment.

Four students were expelled by the school for taking part in the alleged abuse and filming parts of it.

Prince Christian, who is 16 and first joined the school in August last year, is not connected to the allegations in any way.

The statement continued: ‘It has been a difficult process for us as a family, but, based on the overall picture and our special position as Crown Prince Couple, we have chosen that Prince Christian will stop at Herlufsholm and that Princess Isabella will not start in ninth class at the school after the summer holiday.

‘During the summer, we, together with our children, will make a decision about their future choice of schools.

‘With thoughts about the many students who will continue at Herlufsholm, it is our hope that the school now gets more peace to ensure the necessary changes and succeeds in creating a culture in which all thrive and feel safe.’ 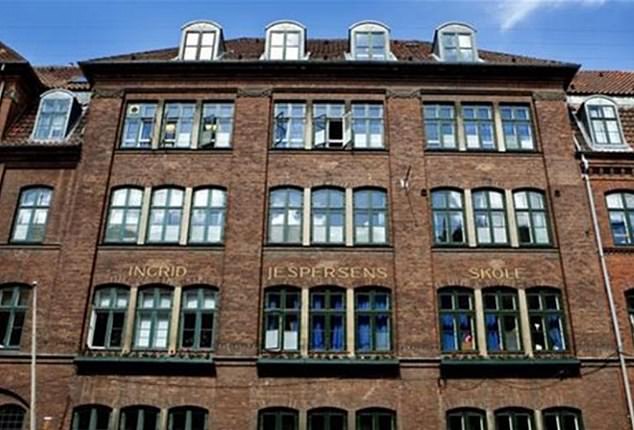 Isabella was due to join her brother at Herlufsholm, but her parents pulled out her application. She will be studying at the Ingrid Iespersens Skole

When the documentary first came to light in May the royal family were swift in their response, sharing their deep disappointment with the rest of Europe.

‘As parents of a child who goes to Herlufsholm, we are deeply shaken by the testimonies that have emerged in the current documentary about the school,’ the couple said on May 4.

‘It is heartbreaking to hear about systematic bullying and about the culture of abuse and violence that many have been a part of.

‘That is completely unacceptable. As parents, we expect the school to effectively ensure a culture where everyone is safe and part of the community, and we will in the coming time follow the changes that are obviously necessary.’

Herlufsholm was founded almost 500 years ago for Danish nobility and has seen a number of royals and political figures attend.

The school’s principal Mikkel Kjellberg, who was fired shortly after the documentary came to light, said the allegations contained within the television program were ‘very old cases have been used from another time – where the culture at Herlufsholm was different’.

‘Bullying, violence or sexual abuse is not acceptable at Herlufsholm School,’ Kjellberg said at the time.

It’s not yet known where the Danish royal children will spend the remainder of their senior schooling years.