A well-connected network of philanthropists, activists and political operatives plans to support independents gunning for Liberal seats in Sydney and Melbourne in next year’s federal election, hoping to increase climate action by shifting the balance of power in parliament. 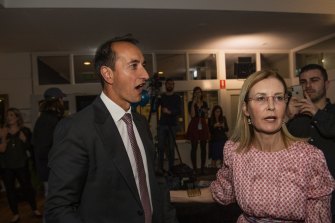 Liberal Party MP Dave Sharma on the night of his victory for the seat of Wentworth in 2019. Credit:Louise Kennerley

Among seats being considered by Climate 200, the group founded by Simon Holmes à Court, are North Sydney, Wentworth and Mackellar in Sydney, and Goldstein and Flinders in Melbourne.

Mr Holmes à Court said the group will announce the make-up of its own advisory council in the coming weeks. The council will include three former politicians as well as an experienced political strategist to help select candidates to support.

It is already in talks with some candidates on shortlists for support in some seats.

Mr Holmes à Court, a clean energy analyst and investor, said the group would consider backing independents who demonstrated that they had a chance of winning due to legitimate local support and were determined to act on climate change and support a federal integrity commission.

He said the group’s own research, as well as polling released last week by the Australian Conservation Foundation, demonstrated that there were enough voters in some Liberal seats who would not vote for Labor or the Greens but would support a moderate independent determined to act on climate.

Comparing MPs from the moderate side of the Liberals to MPs known for their support for fossil fuel industries he said, “whatever Trent Zimmerman and Dave Sharma may believe or say in the party room, they have exactly the same voting record on climate change as Barnaby Joyce and Craig Kelly.”

Mr Sharma, the member for Wentworth, the seat once held by Malcolm Turnbull and lost to the Liberals for a time to independent Kerryn Phelps, responded that he was proud to have voted with his Nationals colleagues to pass waste reduction legislation and increase funding to the Australian Renewable Energy Agency.

“I’m interested in politics as the art of the possible, not meaningless posturing,” he said.

Mr Zimmerman said he believed it was vitally important for the government and the Liberal Party to have strong voices inside it “arguing for sensible climate change policies.”

“It seems bizarre to me that any organisation interested in climate policy will try and remove those voices,” he said.

Cathy McGowan, the former independent MP who won the Victorian seat of Indi from the government in 2013 before her retirement in 2019, said it was clear to her that there was a desire for more action on climate. She is in constant contact with community groups seeking her advice on how to run successful independent campaigns.

On Thursday evening she hosted an online panel discussion on the issue along with Mark Kelly, who established the group Vote Tony Out and backed Zali Steggall in her independent campaign to oust former prime minister Tony Abbott from his seat of Warringah in a campaign that focused on climate.

She said more than 110 people joined the online panel discussion, representing independent groups around the country, many focused on climate change.

Among the groups represented were members of the so-called Voices movement, which supports a loose network of independent campaigns that generally target incumbent conservative MPs. Mr Holmes à Court has confirmed Climate 200 will consider supporting candidates connected with Voices.

This week it was revealed that Liberal senator Andrew Bragg had written to the Australian Electoral Commission urging it to investigate whether the Voices movement was breaking electoral regulations.

“Many of the ‘Voices’ groups have failed to say who they are, who is funding them and what their policies are,” he told the Herald and The Age.

Before the last election, Climate 200 attracted support from donors such as Atlassian founder Mike Cannon-Brookes and spent $500,000 backing 12 independent candidates.

Mr Simon Holmes à Court said the group had already secured donations from 500 individuals for the coming campaign, but would not say how much had been raised.