A fire-damaged car belonging to a missing elderly camper has been found in Gippsland and police are appealing for public help to find the man and his companion.

Russell Hill, 74 has not been heard from since March 20 while 73-year-old Carol Clay, who is believed to be with Mr Hill, has not returned home. 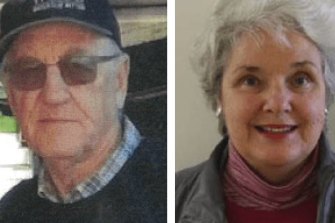 Russell Hill and Carol Clay have been missing for more than a week.

Mr Hill, from Drouin, left on March 19 to visit campsites along the Dargo River about four hours north-east of Melbourne.

His last check-in came from Wonnangatta Station in the Victorian Alps. His car was found on March 27 with signs of minor fire damage near the Dry River Creek track at Billabong.

Ms Clay told friends she would be returning home from a trip on Saturday or Sunday. Her car is still parked at her Pakenham residence.

Mr Hill used to work in the logging industry and is familiar with the area, police said.

"It is not known what either of them are wearing and it is out of character for Russell not to make contact via the radio," a police statement read.

"Police hold concerns for the welfare of Russell and Carol due to the amount of time they have been missing and Russell suffers from medical conditions."

Anyone with information should contact Sale police station on 03 5142 2200.