When the lights go down at Sunday’s 93rd annual Academy Awards, will anyone be zeroed in on the Oscar-inspired lamps on custom café tables? David Rockwell sure hopes so.

In what will be his third go-round handling the set design of what has traditionally been the epitome of red-carpet award shows, Rockwell has literally set the stage at Union Station, one location being used for the three-hour extravaganza. Orchestrating hundreds of tasks and planning in a pandemic takes some legwork. Reached in Los Angeles Tuesday afternoon, the New York-based architect admitted how the week had whizzed by.

Part of what has been “interesting, challenging and thrilling” about this year’s effort is taking into account the producers’ narrative of “Bring Your Movie Love” all the way through, Rockwell said. Add to that the conditions restricting how people can gather and in what quantities, and throw in a worldwide audience of 23.6 million viewers (as was the tally last year). The founder of the Rockwell Group said that over the past 18 months, “We’ve been leaning into adaptability. That has always been a core interest of mine, ever since I was kid: how people come together and how spaces can adapt.”

As for whether Rockwell feels under pressure with sharp drops in viewership for the Golden Globes and Grammys and some naysayers having issued a postmortem on award shows before the Oscars has even started, he said, “No, you just have to do the best that you can do. I am counting on the non-naysayers. Where are there not naysayers right now of anything? Remember ‘The ayes have it?’ At the moment, the neighs have it.”

All of the Fashion at the 2021 BAFTA Awards

Before imagining the flexible indoor-outdoor spaces in Union Station, Rockwell was already practiced at adaptability. Last month his architectural and design firm teamed with TAIT to create OpenStage NYC, which uses portable staging to help arts organizations move to outdoor performances. Last year his company launched DineOutNYC to advocate for public space for outdoor dining. Adaptability is being revealed in cities as “an incredibly important, resilient way for places to be able to respond,” Rockwell said.

”It’s an evolving, very complicated world that we’re living in. There are still ongoing checklists that we’re still checking today, things in the waiting room and access. The goal is at the end of the day all of those details go away. The hardware goes away. One of the powerful things about theater is it’s an ephemeral medium. Everything that we’re doing there is for that three hours. But the impact and memory imprints in your brain, as it does in live theater,” Rockwell said.

The opportunity to work in such a landmark Art Deco building like Union Station with its Mission Moderne style was another upside, according to Rockwell, who declined to disclose the budget for the event. This year’s Oscars will hark back to the early days of the Academy Awards, when seated dinners in swish ballrooms were the preferred setting. “That intimacy, elegance and compactness are certainly inspiring what the rest of the team is doing and what I’m doing,” he said.

Calling the shots for Sunday’s event are fittingly Steven Soderbergh of “Contagion” fame, his longtime collaborator Stacey Sher and Grammy winner Jesse Collins. Rockwell noted the added dimension that Union Station’s Ticket Concourse provides with its 40-foot windows. The streaming daylight creates a room within a room for not just the honorees, but it also “invites in the TV audience to this intimate place,” Rockwell said. “Hopefully, this deep human need that we have to connect with each other and hear stories will feel very much like the driving force,” he said.

Having looked at a number of spaces before deciding on Union Station, Rockwell noted the location is the largest passenger railroad terminal in the Western part of the U.S. As for whether there is any message in the choice of a transportation hub in such a car-friendly city, Rockwell said, “When it was built in 1939, it was a real statement about the importance of public transportation,” he said, adding that that same year the architectural father-son duo (John and Donald Parkinson) also designed the city’s Memorial Coliseum and City Hall. “Their work is sort of dotted over L.A.”

Asked if he was concerned about the Oscars’ glamour factor at a time when people have lost loved ones to the coronavirus and many have reevaluated their priorities, Rockwell said, “I think the producers with the tag line of ‘Bring Your Movie Love’ are wanting to tap into the global appreciation of film to foster connection and inspire, which it has the ability to do. The glamour factor is quite a simple installation. There were a number of problems to respond to, like with a landmark ceiling you can’t put in any lighting or sound,” he said.

That meant sound and lighting had to be lowered to the table, which resulted in a certain simplicity and intimacy and “a connection around inspiration and storytelling,” Rockwell said. His team designed the lamps that will anchor each table, explaining that everyone loves a candle on the table because it is centering. “You will have to tune in to see,” he said.

Behind the stage hangs a giant velvet curtain in “Urban Blue” (the rich hue inspired by the architect Joseph Urban). As for what will catch viewers’ eyes, Rockwell expects the movement they will see through a series of spaces and two beautiful courtyards will hold their gaze. Pre- and postshow celebrant telecasts will be on the North Patio. Sprinkled throughout are a colorful tiled fountain, benches, jacaranda trees and Roche Bobois-covered furniture. Guests and nominees will also be able to wend their way past the DJ booth to alfresco bars and lounge areas. Rockwell is hopeful that the “kinetic aspect” of the series of spaces will be “compelling.” 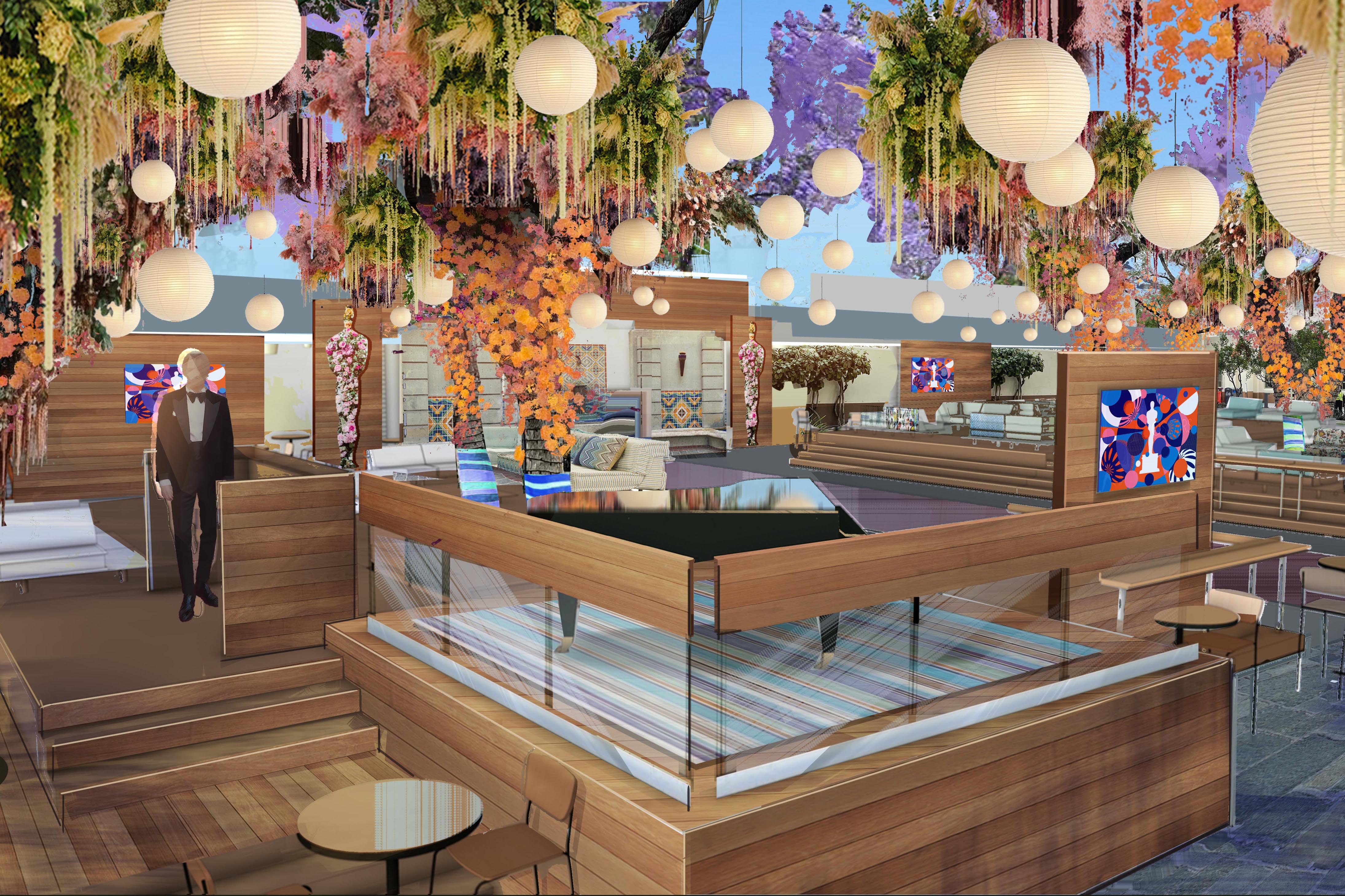 Rockwell’s multitiered layout for Union Station is designed with movement in mind. Courtesy of the Rockwell Group

Guests will enter from house left along a raised promenade. There will also be platinum-finished geometric screens with portraits of Oscar nominees past and present. (During the show, content will also be beamed on the screens.) “What will be striking is how much it feels like it belongs in Union Station and it is its own structure,” Rockwell said. “Lead video and photography will be used in every possible storytelling device that we can.”

Having seen a good number of this year’s contenders even before he was offered the assignment, Rockwell said elements of “My Teacher the Octopus,” “Nomadland” and “Promising Young Woman” resonated with him for different reasons.

Being able to take a space like Union Station and think about how it’s adaptable and “can have different kinds of lives is a super interesting experience to have,” Rockwell said. “There is an extraordinary amount of planning that goes into creating opportunities for spontaneity. It is something that I have researched a lot for this book I have coming out called, ’Drama.’”

The book explores how some of the principles of theater apply to architecture. Due out in Europe later this month and in the U.S. next month, the book involved research into things rooted in spontaneous performance. For that, he spoke with chef José Andrés, actress Anna Deavere Smith, theater owner Jordan Roth and producer and composer Quincy Jones, who shared his views on orchestration. (Along with his new book, Rockwell has had a hand in “Seven Deadly Sins” and is involved with “Illuminarium,” a digital experiential entertainment.)

“One of the points the book makes is much like theater, architecture without an audience is just hardware,” he said. “…It looks at the importance of story, of backstory, of choreography and of movement. That is very much a part of this year’s Oscars because we are in multiple spaces. You want the movement to be empathetic…understanding the idea of setting the stage for the actor. All of those ideas are explored in theater and in architecture.”

Asked how he expects architecture to change post-pandemic to behavioral changes, when presumably some people will be hesitant to return to crowds or their daily routines, Rockwell said, “It’s going to be a matter of studying where things are going and being adaptable. Cities have already been reborn with things that are essentially pop-ups. But I think there will be something that is behind a pop-up but short of permanent. Things that are being looked at are how streets can be more nimble, how the indoor and outdoor line can be blurred and how are homes being adapted to work in, or offices are adapted to do those things that only work better in person,” Rockwell said, adding for his studio that means meetings about materials require in-person gatherings with clients in socially distanced conference rooms.

“There’s going to be this whole learning experience and this middle-term innovation and opportunity in space. There’s going to be space for new ideas to start to come up for cities to be more flexible and more equitable. That is what I believe has to happen.”

But back to the Oscars. Making the point that hours of preparation are needed in a restaurant to make a two-hour meal happen, Rockwell said, “If you look at this case, we’ve done all the planning. But by the time the show begins, the control is out of our hands. It’s a live experience and hopefully there can be spontaneous moments.” 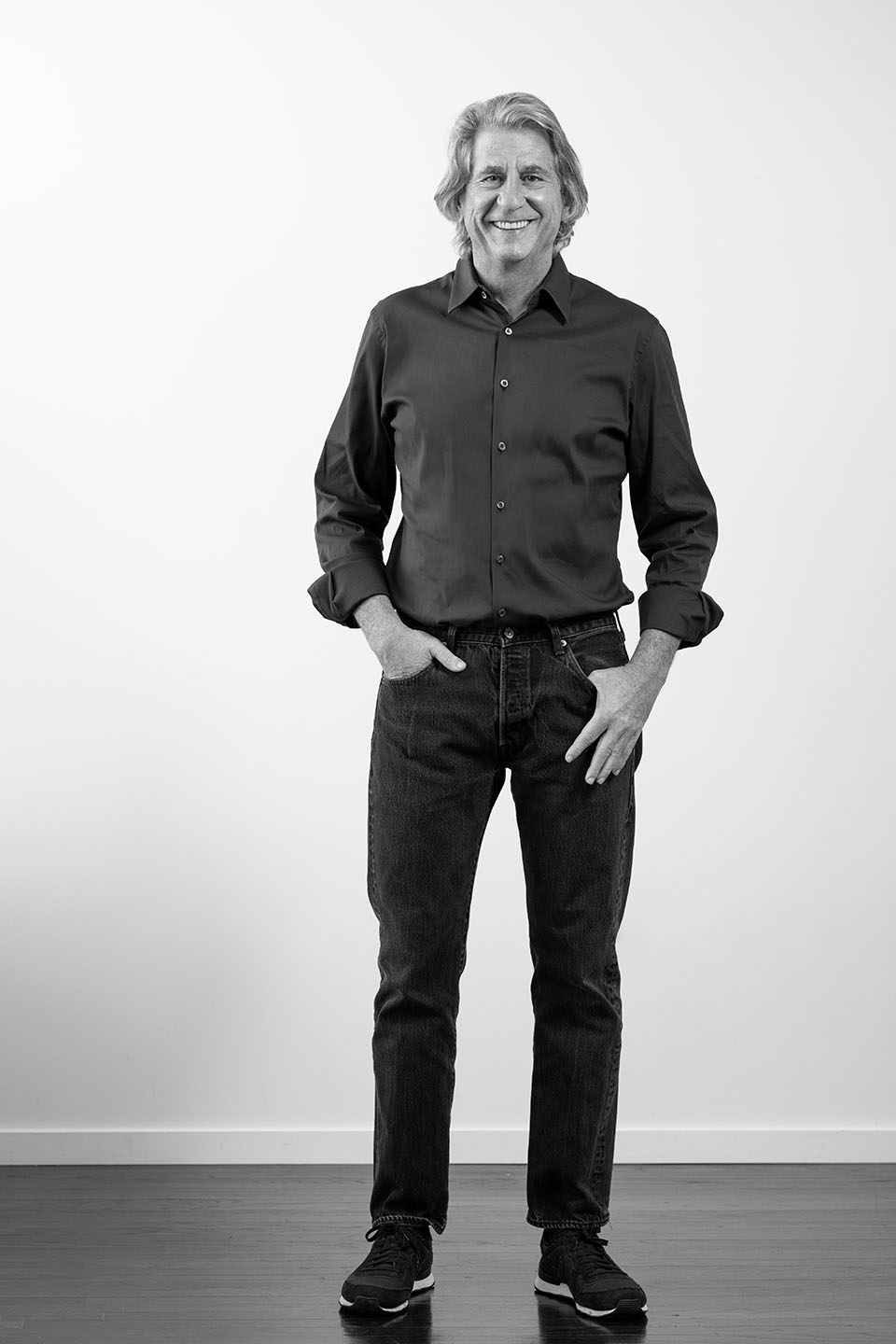 As for how design and entertainment can help transport people, Rockwell said, “It opens up ideas about their place in the world and connects you to other emotional journeys. You can find yourself in those stories. It is one of the most iconic ways to engage in a community.”

Recalling his first trip to the theater at the age of 12 to see a performance of “Fiddler in the Roof,” Rockwell described being enthralled by the performance, just as he had been after seeing his first movie, “Camelot.” He added, “There are moments that connect us to humanity and the need to be a part of the story.”