Australia’s extinction crisis will be halted by the Albanese government, Environment Minister Tanya Plibersek has declared, as she launches a conservation action plan to protect native wildlife from the triple threats of habitat loss, feral predators and climate change.

Plibersek’s plan is ambitious given Australia ranks as one of the world’s worst jurisdictions for extinctions and the funding available to her initiative is a fraction of what experts say is required to reverse wildlife losses. 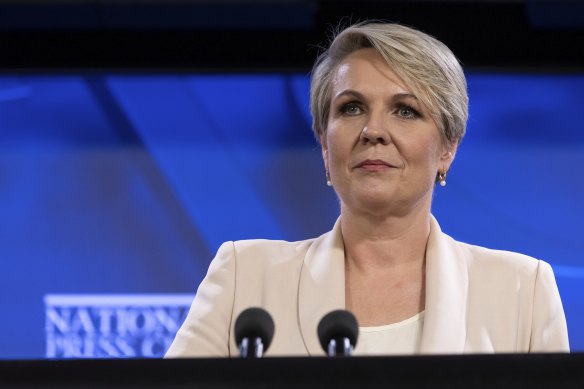 “The need for action has never been greater,” Plibersek said on Tuesday when she launched an updated Threatened Species Action Plan. “I will not shy away from difficult problems or accept environmental decline and extinction as inevitable.”

Australia has lost the most mammals of any continent. The 39 mammal species that have disappeared since colonisation in 1788 represent 38 per cent of the world’s extinct mammals.

Australia has around 2000 flora and fauna species on the threatened list, which means they are at elevated risk of extinction. There are now more foreign plant species growing wild than natives and in the past five years, 17 mammal species were either added to the endangered list or upgraded to the critically endangered list, as well as 17 birds and 19 frogs.

“Our current approach has not been working. If we keep doing what we’ve been doing, we’ll keep getting the same results,” Plibersek said.

A peer-reviewed study from this year revealed that Australia currently spends about 7 per cent of the $1.6 billion per year needed to halt species loss and recover nationally listed threatened species.

The action plan draws on a $224 million funding commitment over the next four years and sets a range of five and 10-year goals including reducing the impact of feral cats, foxes and gamba grass on wildlife, habitat restoration and relocating species to more suitable locations outside their natural range.

Action plans were launched by the Coalition government in 2015 and updated by former environment minister Sussan Ley last year.

Last year Ley identified 100 target species and 20 places. The new plan expanded to 110, including koalas, the Leadbeater’s possum, wollemi pine and tangled wattle, as well as 20 places including giant kelp forests in Tasmania, the Australian Alps in NSW and Victoria and the forests of Far North Queensland.

Plibersek said on Tuesday prioritising species would “create a kind of halo effect for the whole ecosystem that that plant or animal is part of”.

The Coalition pursued a significant shift in environmental policy during its time in government, shifting away from the conservation measures known as recovery plans and focusing instead on conservation advice.

Recovery plans are developed by experts to bring threatened species back from the brink with binding deadlines for objectives like population growth and can require a minister to ban development in critical habitats. Conservation advice is less powerful and the minister must only consider expert advice on species protection.

There are about 200 overdue recovery plans yet to be completed and Labor’s former environment spokesperson Terri Butler promised during the federal election campaign to address the “backlog of recovery plans amassed during a near-decade of Liberal-National government neglect”.

“Costed and time-bound recovery plans are essential for all threatened species,” Lowry said.

Independent senator David Pocock welcomed the commitment to halt extinctions and said more funding was needed to deliver on the goal so it’s not “a hollow promise”.

“Scientists have calculated that current funding is less than a fifth of what’s needed to end the extinction crisis,” Pocock said.

“A true line in the sand moment for extinction would rule out land clearing of critical habitat and new coal and gas, and end native forest logging.”

“The majority of our mammal extinctions have been driven by feral cats, which kill an estimated 2 billion native animals every year. Concerted action and investment in new technologies to tackle feral cat populations, as outlined in the plan, is vital,” he said.

Labor pledged during the federal election to overhaul environmental protection laws and issue a full response to the scathing findings of the Samuel Review of the Environment Protection and Biodiversity Conservation (EPBC) Act as well as establish new nature watchdogs with an Environmental Protection Agency and a National Water Commission.

The government has also pledged to conserve 30 per cent of its land and 30 per cent of its sea areas by 2030 in line with the UN Convention on Biological Diversity and explore the creation of new national parks and marine protected areas.