Nigella Lawson has launched a series of budget-friendly recipes offering healthy meals for just £1.25 per portion in a new partnership with Ocado.

The celebrity chef, 62, has collaborated with the online grocery giant to launch four money-saving recipes, including a peanut butter pasta.

Using everyday essentials, Nigella has created a handful of supper recipes, which pack a flavour punch whilst requiring minimal effort, including a Stir Fry with a dash of HP sauce and Black Bean and Clementine Couscous.

The recipes, which will be released over the next year, can all be cooked for just  £1.25 per portion, which means you can feed a family of four for as little as a £5. 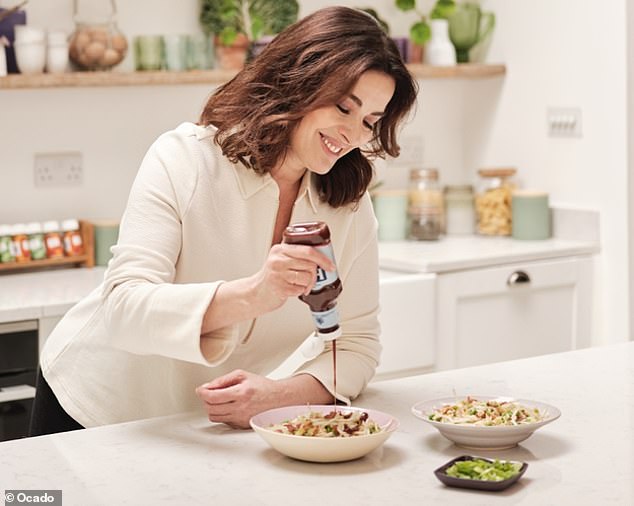 I can’t deny that the idea of making a sauce for spaghetti with peanut butter might sound alarming – not least for Italians! – but I can promise you it has an appeal that goes beyond peanut butter fans. For what hits you most is not its peanuttiness but its voluptuous creaminess. Here, I propose cooking the pasta largely off the heat (and leaving tender spinach leaves in the colander, to be effortlessly wilted as the spaghetti is drained over it). This energy-saving and much calmer way of cooking pasta was taught to me by Anna del Conte 30 years ago, and written about in her 1991 book Entertaining all’Italiana, so I smiled wryly when I read recently of this breaking-news method, as authorised by the Nobel prize-winning Italian physicist, Giorgio Parisi. This store-cupboard stalwart, a favourite in my home, will, I hope, become as regular a fixture in yours.

Get out a large pan that comes with a tightly fitting lid, and fill it with 2.5L water from a just-boiled kettle. Clamp on the lid, and bring the water back to the boil on a large burner on your hob. Sit a large colander in the sink, break open your bag of baby spinach leaves with gusto and tip the contents into the waiting colander.

Get out a clean tea towel (not a terry towelling or waffle one, just a smooth, thin one) and take it over to the stove. Once the water’s boiling vigorously, add 1tbsp fine salt, which will make the water rise up fizzingly. Wait for it to subside, then give it a good stir and, once the water’s boiling again, add the pasta, and stir with a pasta fork to help it submerge. Once the water has come back to the boil, cook for 2 mins, stirring often to detangle and declump the spaghetti. Once the 2 mins are up, take the pan off the heat – though just to a neighbouring burner – cover with your tea towel and clamp on the lid for 8 mins, during which you can prepare your remaining ingredients.

Remove the lid and tea towel, give the spaghetti a good old stir, then scoop out 500ml of the starchy pasta cooking liquid with a jug or mug: it’s this that makes the sauce so luxuriously creamy. If you taste a strand of pasta, you should find it’s almost properly cooked, but still has a tiny bit of bite to it.

Drain the pasta into the spinach-filled colander – thereby wilting the leaves – and take the pan back to the hob, leaving the colander in the sink for now. Quickly spoon the peanut butter into the warm pan and add about 125ml of the reserved pasta cooking water and stir well. It will look grainy and alarming at first, and when you look at the curdled clumps, you’ll think something’s gone wrong. It hasn’t! Just carry on stirring, adding the minced garlic, dried thyme, chilli flakes, 2 tsp lemon juice and ¼ tsp salt, and you will swiftly see a pale, herb-flecked emulsion come into being. Slowly stir in another 125ml of the pasta water until that too has been smoothly incorporated.

Add the spag‘n’spinach and stir and toss in the pan (I use a couple of forks) to mix everything together as evenly as possible. You’ll need to keep adding more of the reserved pasta water, as the pasta will keep drinking it up, so keep adding a little at a time, stirring vigorously but carefully; you shouldn’t have more than 50ml left, though you might well use it all. Taste for seasoning – you may need more salt or lemon juice – then serve, making sure you give everyone an even amount of spinach. If wished, lightly dust the top of each bowl with paprika. And if you have half a lemon left over, you could slice it into thin wedges and give one to each person to squeeze as they eat.

While I find it unlikely that it won’t all be gobbled, any leftovers make for a wonderful cold noodly lunch the next day, when I like to spritz it with a little extra lemon juice and sprinkle over a few more chilli flakes.

Known for her unusual flavour combinations, such as a butter, marmite and lettuce sandwich, Nigella’s new recipes do not disappoint.

She created a ‘Dreamy, Creamy Peanut Butter Pasta,’ which combines spinach, peanut butter and a touch of lemon for a pasta dish.

Online, the grocer described the dish as ‘utterly delicious, writing : ‘The idea of making a sauce for spaghetti with peanut butter might sound alarming, but we promise you that it’s voluptuously creamy and utterly delicious.’

Nigella added: ‘I can’t deny that the idea of making a sauce for spaghetti with peanut butter might sound alarming – not least for Italians! – but I can promise you it has an appeal that goes beyond peanut butter fans.’ 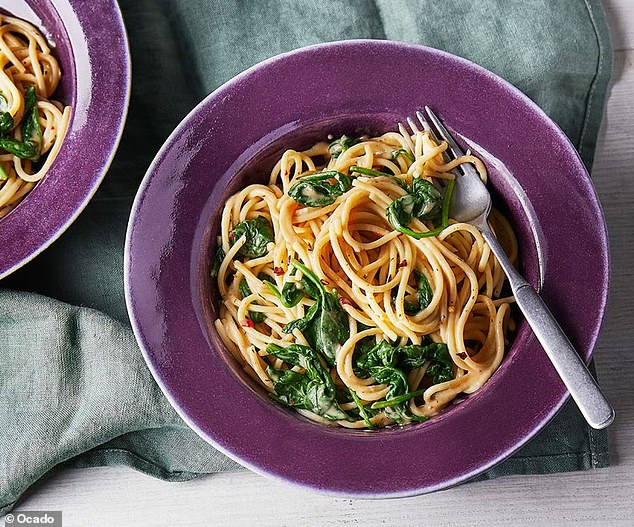 Nigella’s new recipes include ‘Dreamy, Creamy Peanut Butter Pasta,’ (pictured) which she says is one of her staples – despite confessing it ‘sounded alarming’

Meanwhile she advised cooking the pasta off the heat with boiling water from the kettle.

Nigella’s energy saving tip! How to cook pasta off the heat

In her new peanut-butter pasta recipe, the celebrity chef revealed her method for cooking the pasta largely off the heat.

She said: ‘This energy-saving and much calmer way of cooking pasta was taught to me by Anna del Conte 30 years ago, and written about in her 1991 book Entertaining all’Italiana.’

Nigella advised filling a large pan with water from a just-boiled kettle and keeping the heat in with a tight-fitting pan.

She said home cooks should place the pan over the heat so that the water is ‘boiling vigorously’ before taking the pan off the heat for the pasta to cook in the hot water.

She added: ‘This store-cupboard stalwart, a favourite in my home, will, I hope, become as regular a fixture in yours.’

Elsewhere, she also added a zingy splattering of the British classic, HP sauce, to a zesty stir fry.

She explained: ‘This is one of those quick, dependably mood-lifting suppers which I turn to regularly and gratefully.

‘Stir-fries normally involve a little too much last-minute chopping for my liking, but this has only modest demands to make of you on that score: once you’ve sliced the bacon and salad onions, you’re pretty much done, and then it’s only a matter of minutes before everything comes joyously together in the pan.’

She added: ‘If you have the eggs to spare, I wouldn’t try to dissuade you from topping each bowlful with a fried or poached egg.’

Meanwhile she also suggested the dish could also be served up during other times of the day, adding: ‘And there’s just one more thing: despite its title, do not think it must be made only for supper: it hits the spot almost too perfectly when a morning-after-the-night-before breakfast is urgently required!’

Elsewhere, she mixed black beans and clementines to create an adventurous couscous.

Sharing the recipe online, the chef wrote: ‘The fact that this is quick to make is far from its only charm: I return to it, again and again, in one guise or other when I feel a midweek feast with fabulous full-on flavour is called for.

‘The rich earthiness of the black beans is such a gorgeous contrast with the sweet onions and couscous, the bright tomatoes, and the fierce, salty rasp of the feta.’ 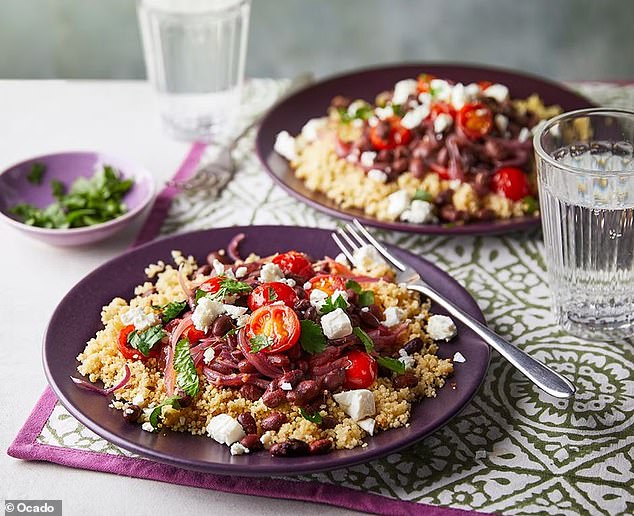 All four recipes, including this ‘Feta, Black Bean and Clementine Couscous’ will cost no more than £1.25 per portion

In a statement, she said: ‘Sharing my enthusiasm and my food has always been a motivating force for me.’

Nigella is known for her down-to-earth approach to cooking and earlier this year revealed another money-saving tip when it comes to making delicious food at home.

The celebrity chef disclosed that she freezes leftover wine so that she can use it in her cooking at a later date.

Nigella also uses her frozen wine for frozen cocktails, so nothing goes to waste.