Australia says a new United Nations nuclear treaty signed by more than 80 countries will be ineffective in eliminating nuclear weapons from the world.

The Morrison government has not signed the Treaty on the Prohibition of Nuclear Weapons, which comes into effect on Friday. 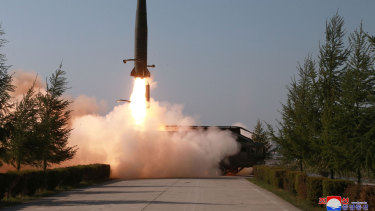 North Korea fired two suspected short-range missiles towards the sea in May 2019.Credit:KCNA/AP

The treaty, signed by 86 countries, bans signatories from testing, developing, producing, stockpiling or threatening to use nuclear weapons.

The Australian government decided not to sign the treaty on the basis that it failed to recognise the realities of the current international security environment.

Government sources confirmed there was concern about how the treaty would affect Australia’s dealings with the United States, including intelligence sharing through the Pine Gap satellite surveillance base near Alice Springs, because it banned signatories from doing anything to assist a nuclear weapon state in its nuclear plans.

New Zealand, which is part of the Five Eyes intelligence-sharing agreement with the US, Australia, Canada and Britain, has signed the treaty.

As a party to the Treaty on the Non-Proliferation of Nuclear Weapons, signed in 1968, Australia is already prohibited from manufacturing or acquiring nuclear weapons.

A spokesman for the Department of Foreign Affairs and Trade said Australia shared the view of many other countries that the treaty “will be ineffective in eliminating nuclear weapons”.

“Australia is committed to the goal of a peaceful, secure world free of nuclear weapons, pursued in an effective, pragmatic and realistic way,” the DFAT spokesman said.

“Our long-held focus is on progressing nuclear non-proliferation and disarmament through a progressive, practical approach that engages all states, especially nuclear weapon states, in the process”.

"After taking into account the need to ensure an effective verification and enforcement architecture, the interaction of the treaty with the Nuclear Non-Proliferation Treaty, and achieve universal support, a Labor government would sign and ratify the treaty," she said.

"Australia can and should lead international efforts to rid the world of nuclear weapons. A Labor government would work with our allies and partners to this end and would always act consistently with the US alliance."

Helen Durham, director for international law and policy at the International Committee of the Red Cross, said all countries should sign the treaty as it was the “most explicit and clearest expression that the horrific weapons need to be banned”.

“This treaty is a great opportunity to move a very stagnated, to date, agenda forward and we would encourage every state to take up this opportunity.”

Dave Sweeney, co-founder of the International Campaign to Abolish Nuclear Weapons, said the treaty was a “sign of hope for our planet”.

“The changed status of nuclear weapons means Australia faces a clear choice,” he said. “We either choose to be a responsible and lawful member of the global community or we remain silent and complicit in plans to fight illegal wars.”