New book to publish rare photographs of Elizabeth Taylor that show the film legend playing dominoes on set in Sardinia, cooing over her toddler son in 1954 and drinking in a Paris hotel with Richard Burton

Rare and unseen photographs of Elizabeth Taylor taken through her life will be published this autumn.

The book, Forever Elizabeth, sees the film star captured in images by a collection of eight photographers and shows the screen legend, who died in 2011 aged 79, behind-the-scenes on set in Sardinia and holding her then toddler son Michael Wilding Jr.

There are also photos of Taylor embracing Richard Burton, who she famously married twice, on London’s South Bank and black-and-white images of the couple at the George V hotel in Paris in 1965. 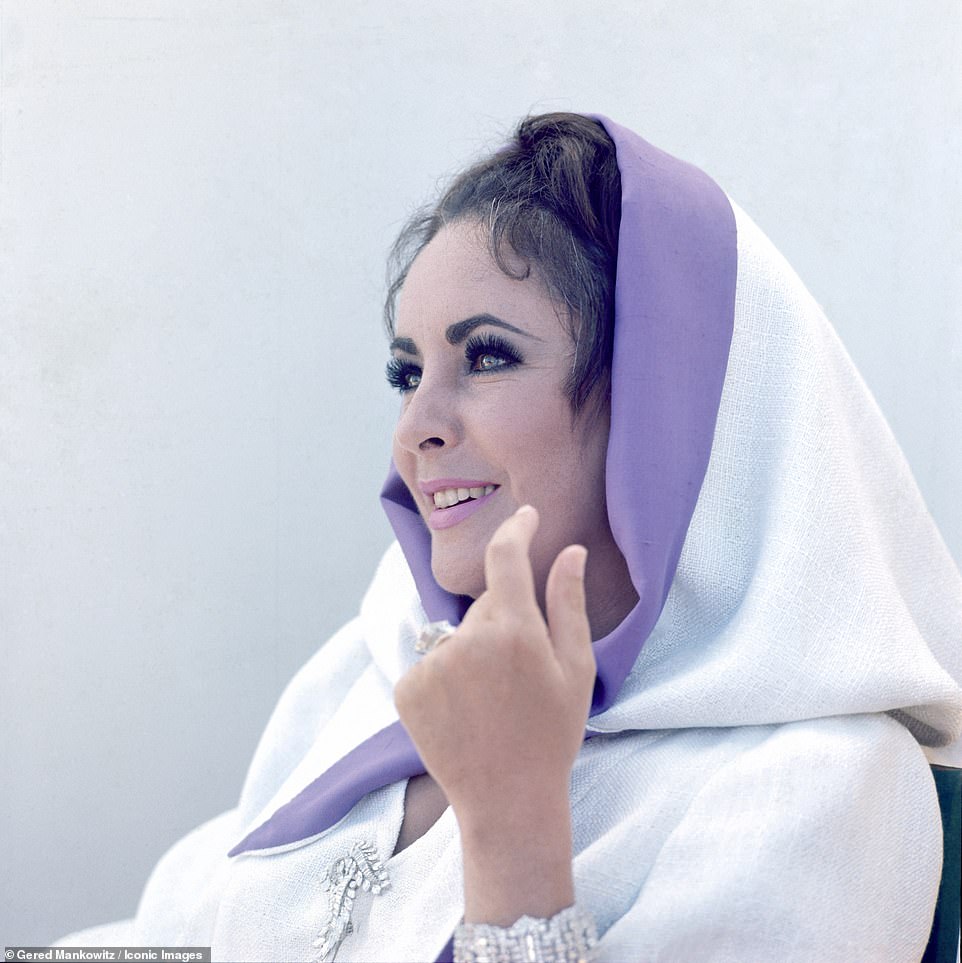 Forever Elizabeth: Iconic Photographers on a Legendary Star is published in October and includes images contributed by eight photographers showing the screen legend at various stages in her career. Pictured: in Sardinia on the set of Boom! in 1968 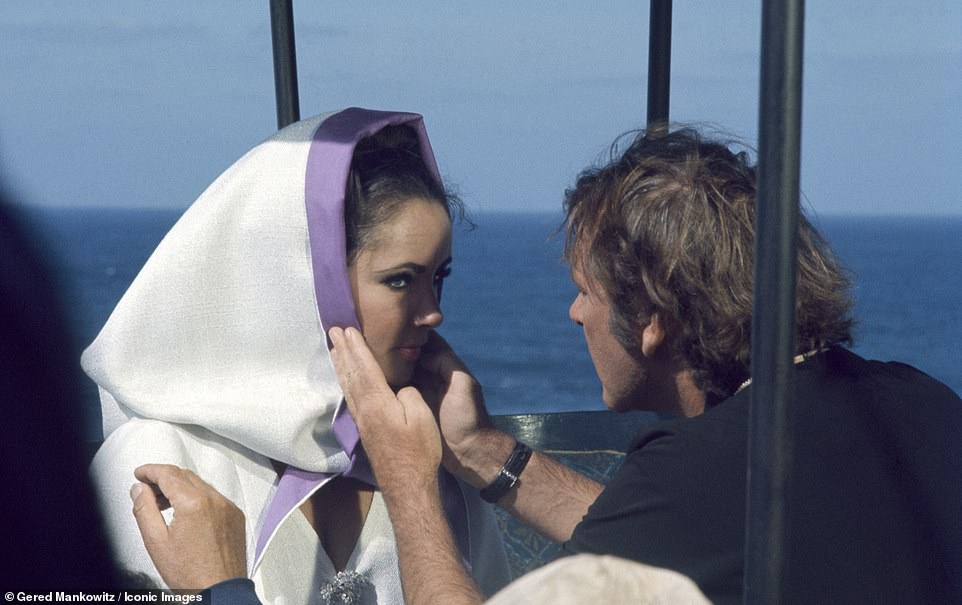 Photographer Gered Mankowitz recalls travelling to Sardinia to shoot the star while she was on location for the 1968 film. She’s seen wearing a white silk cloak with a purple satin trim

Passing the time: Much of Boom! was filmed close to the Porto Conte Natural Park near Alghero on Sardinia. Photographer Gered Mankowitz’s photos show her playing dominoes while waiting to shoot

The book, published on October 21st by ACC Art Books, sees the photographers who took the images sharing their memories of working the Cleopatra star.

The photographs capture the English-American star, considered one of the great actresses – and great beauties – of Hollywood’s golden age, at various stages in her life.

Gered Mankowitz recalls travelling to Sardinia to shoot the star while she was on location for 1968 film Boom! and the book also includes an introduction by famed illustrator and caricaturist, Robert Risko. 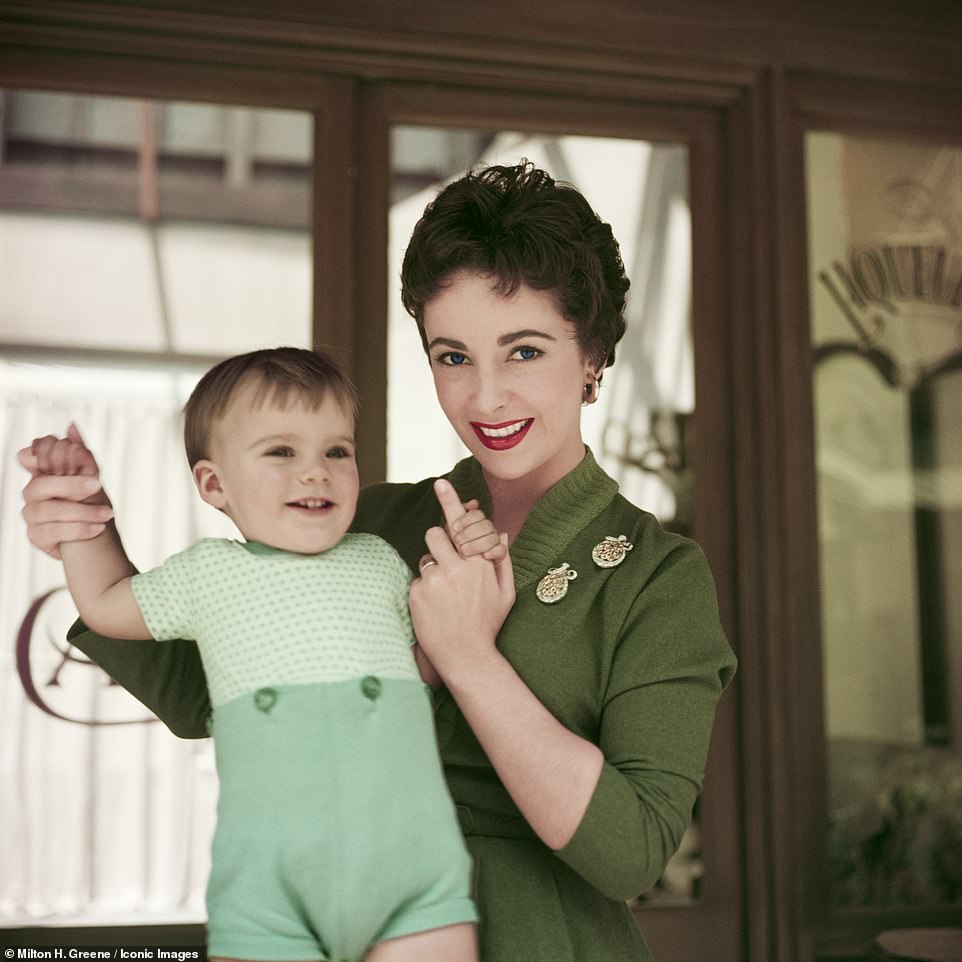 Doting mother: Elizabeth Taylor with her 16-month-old son, Michael Wilding Jr. in May 1954 – she had four children during her lifetime 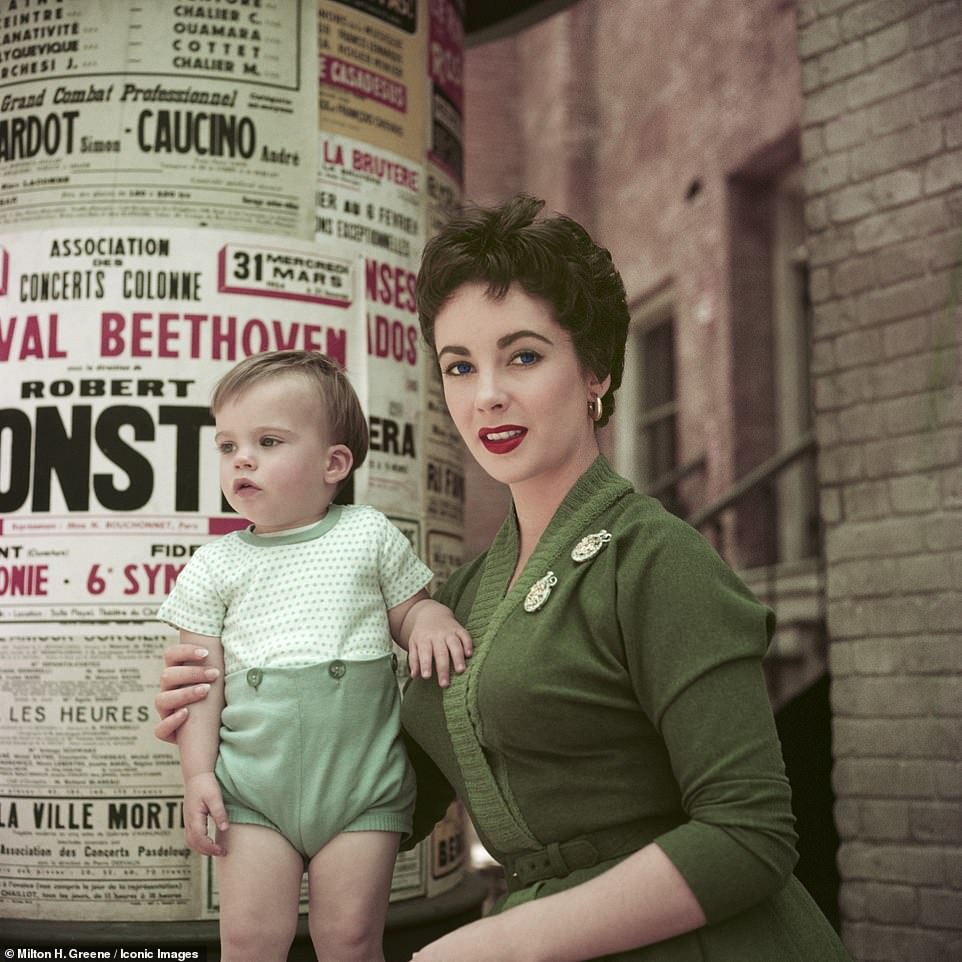 With cropped hair and a racing green cardigan nipped at the waist, Taylor looks every inch a 50s icon in the photos of her with her son, then 16 months old 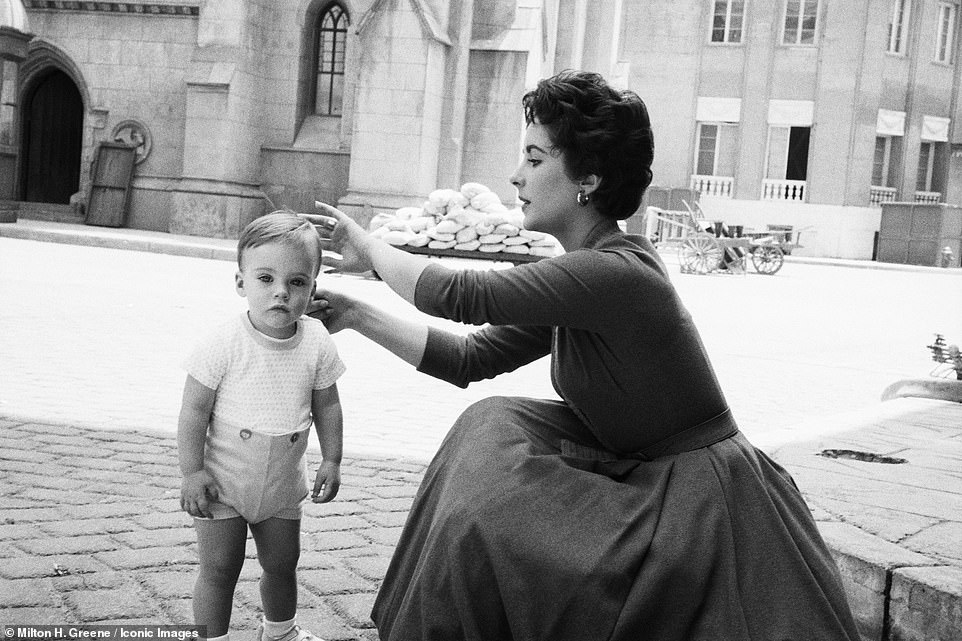 Taylor tends to her toddler son’s locks in the images, which were shot in colour and black and white in France in 1954 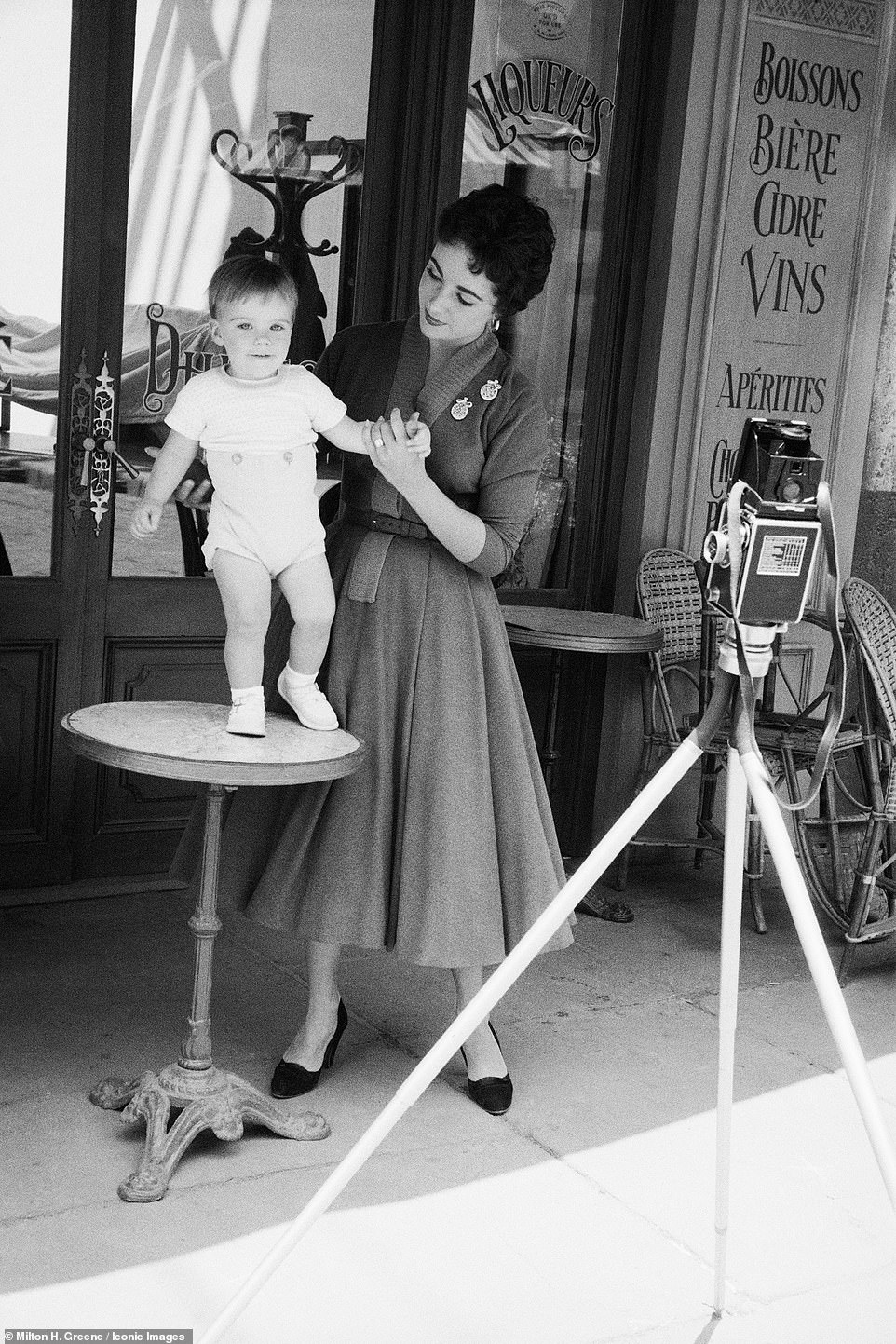 The star wore an a-line dress and black heels for the shoot, which hasn’t been widely shared since it was photographed almost 70 years ago 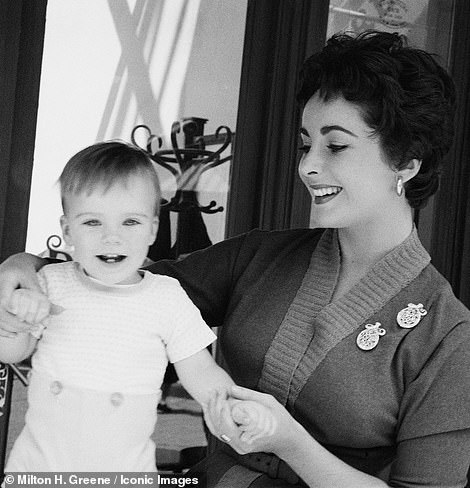 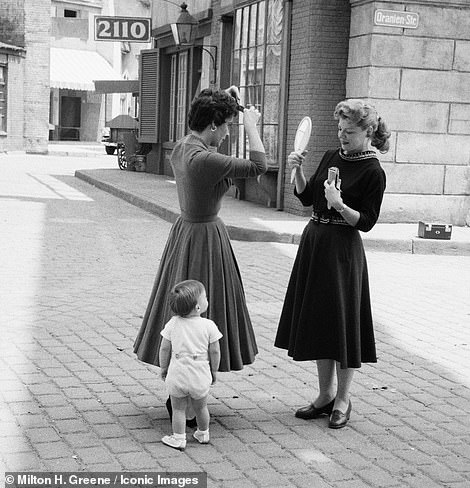 The English-American actress was already a huge star by the 50s, despite her only being in her very early 20s at the time. Right: pictured tending to her hair as a make-up artist assists 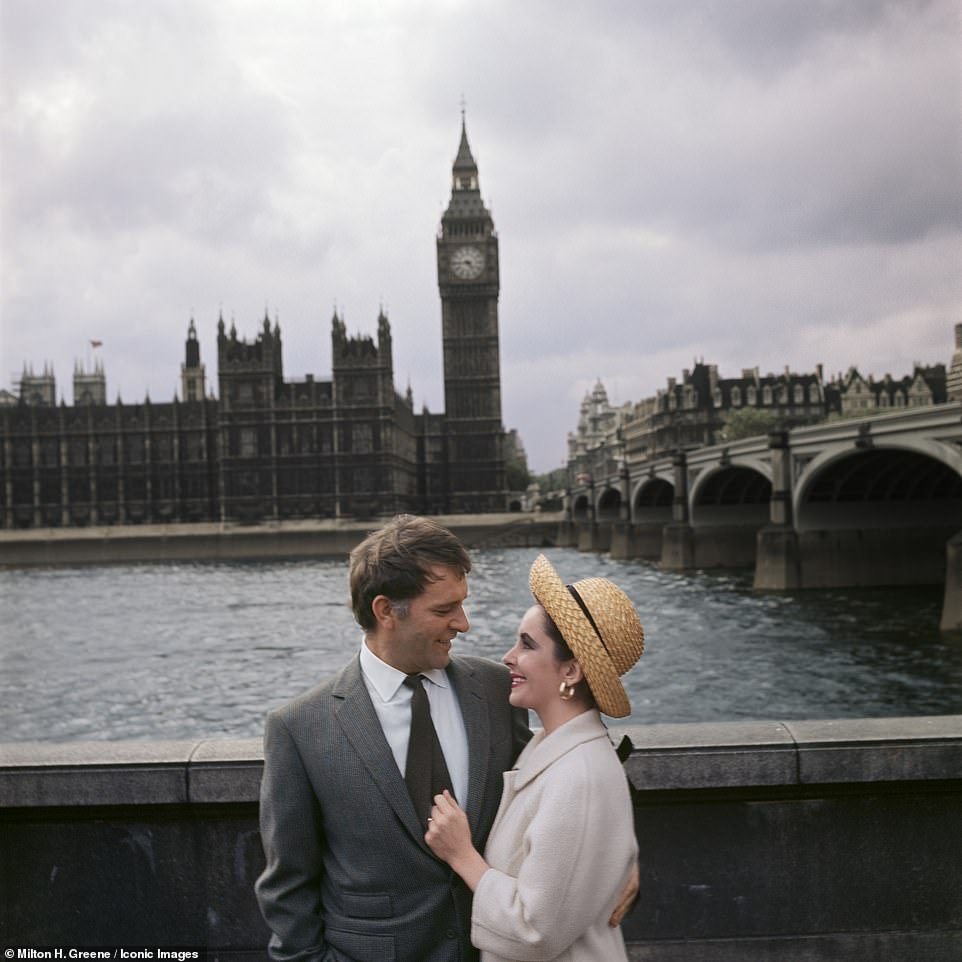 Elizabeth Taylor and Richard Burton in London close to Westminster on the city’s South Bank in 1963. The couple would marry for the first time a year later – and then again in 1975 following their divorce in 1974 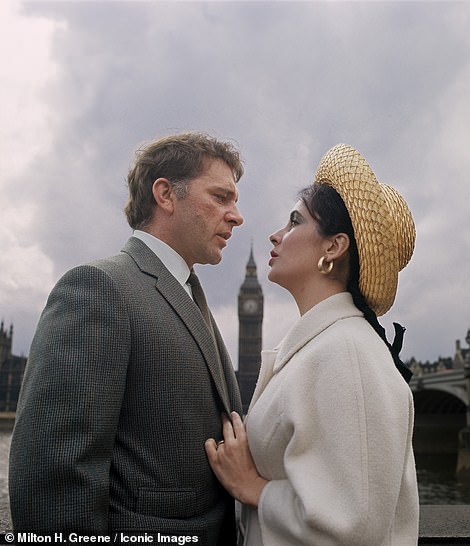 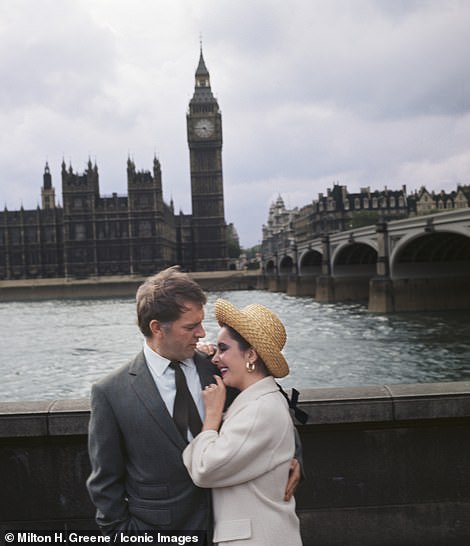 Wearing a cream wool coat and a straw boater hat and hoop earrings, the star pulls in her soon-to-be husband close. Right, the couple pose in front of Big Ben in the photo taken in 1963

Mankowitz’s photos show her playing dominoes while waiting to shoot; the star wore a distinctive white trouser suit with a cloaked hood with a purple satin trim.

The snaps also capture her then husband Richard Burton in a dressing gown and in deep discussion with Joseph Losey, Boom!’s director. Other shots show Taylor, who played wealthy socialite Flora ‘Sissy’ Goforth in the film, wearing an elaborate head dress.

Richard Burton appears in many shots that feature in the photo book, with the couple seen embracing close to Westminster on the city’s South Bank in 1963.

They would marry for the first time a year later – and then again in 1975 following their divorce in 1974. 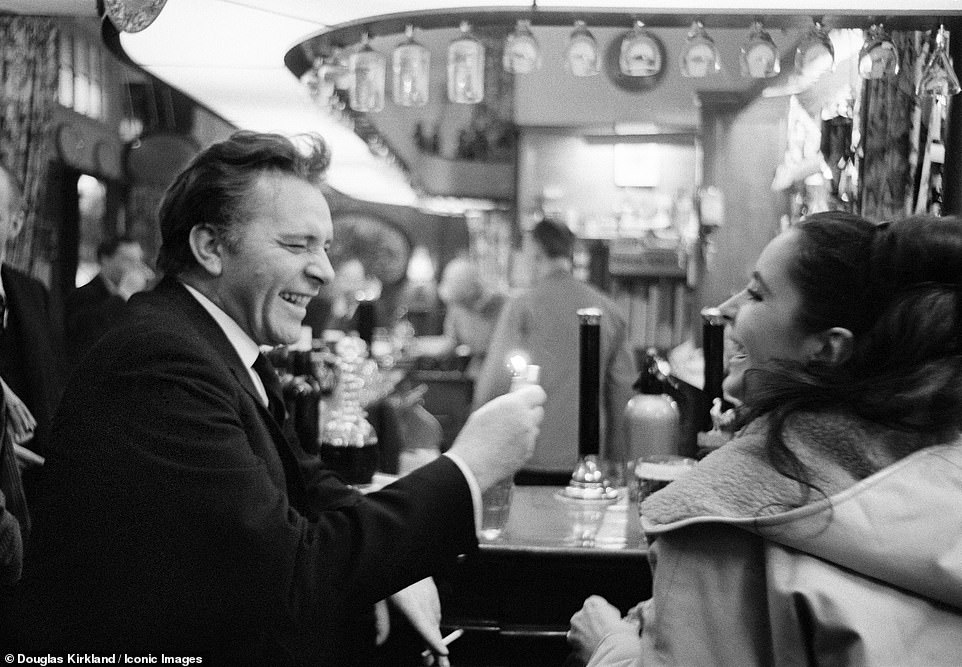 A different side: The couple’s famously intense relationship was also captured in these photographs showing them at the bar of the George V hotel in Paris in 1965 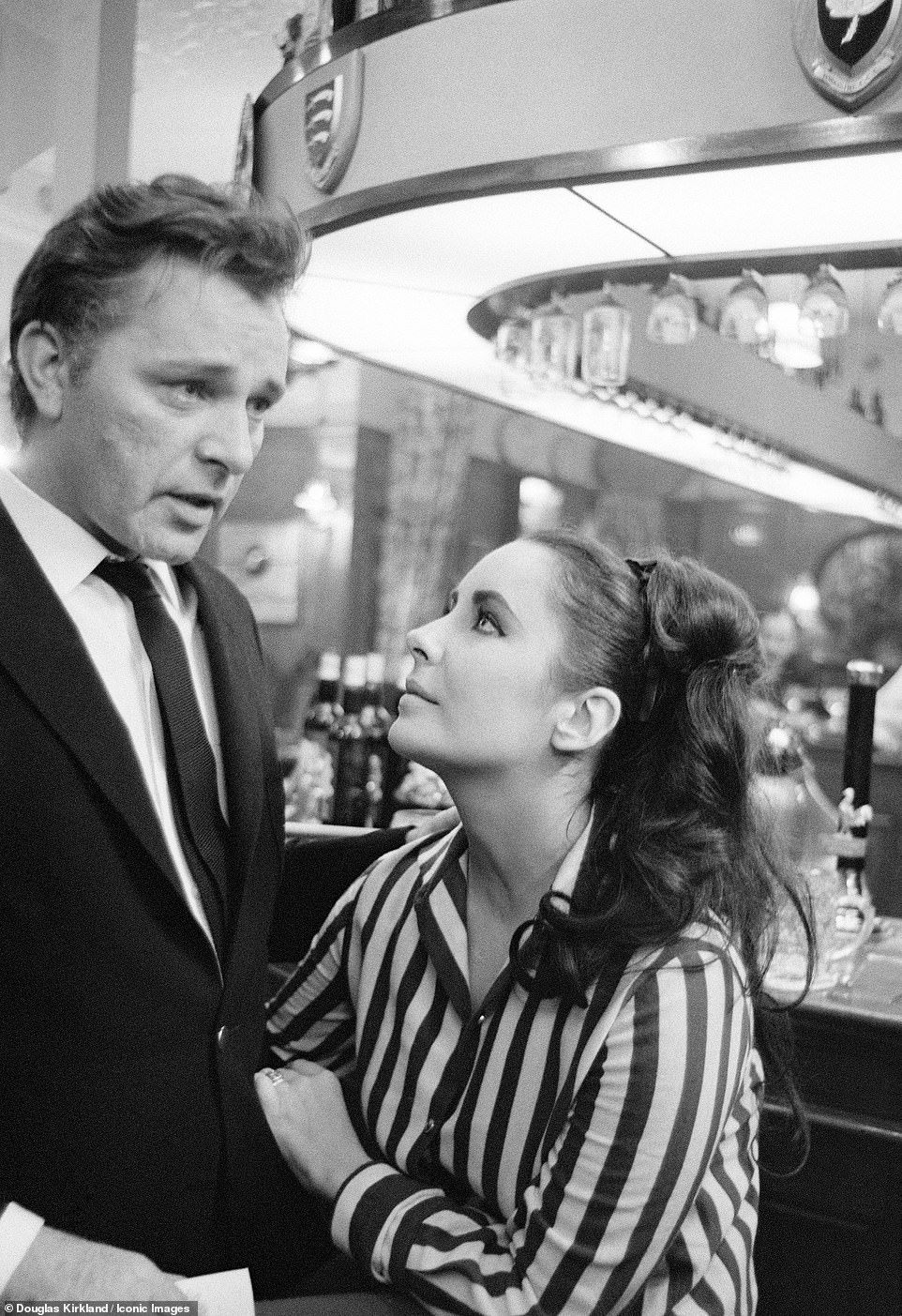 Snapper Douglas Kirkland shot Taylor, who was wearing a striking striped blouse, as she looked up intensely at her husband 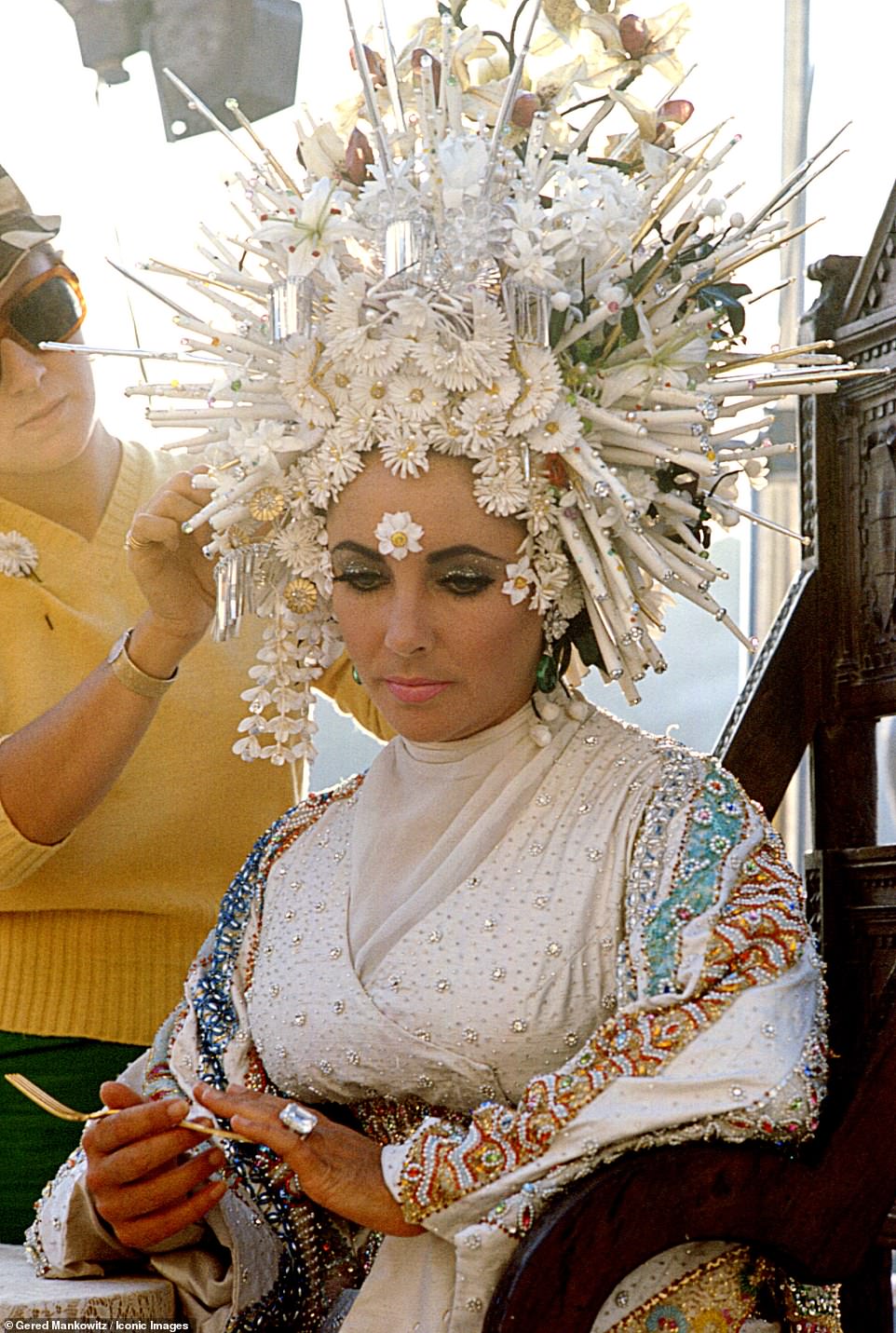 Another Sardinia snap from Mankowitz on the set of Joseph Losey’s romantic drama, Boom! This time Taylor is seen wearing an elaborate head dress Taylor strikes a pose in her extravagant costume; the star played wealthy socialite Flora ‘Sissy’ Goforth who lived in an island paradise with a string of servants

Pictures in Paris show a more intense side, as Taylor, wearing a striking striped blouse, looks up at her husband as they drink at the bar of the glitzy George V hotel.

Other shots show her in France in 1954 cooing over her then toddler son Michael. With cropped hair and a racing green cardigan nipped at the waist, Taylor looks every inch a 50s icon in the photos.

There are also snap of her with Michael’s father in the book. Photographed by Milton H.Greene, the images show Taylor and Wilding in happier times filming an American Airlines commercial in 1955 – they were separated in 1956 amid tales of his cheating on her while she shot the film Giant with James Dean. 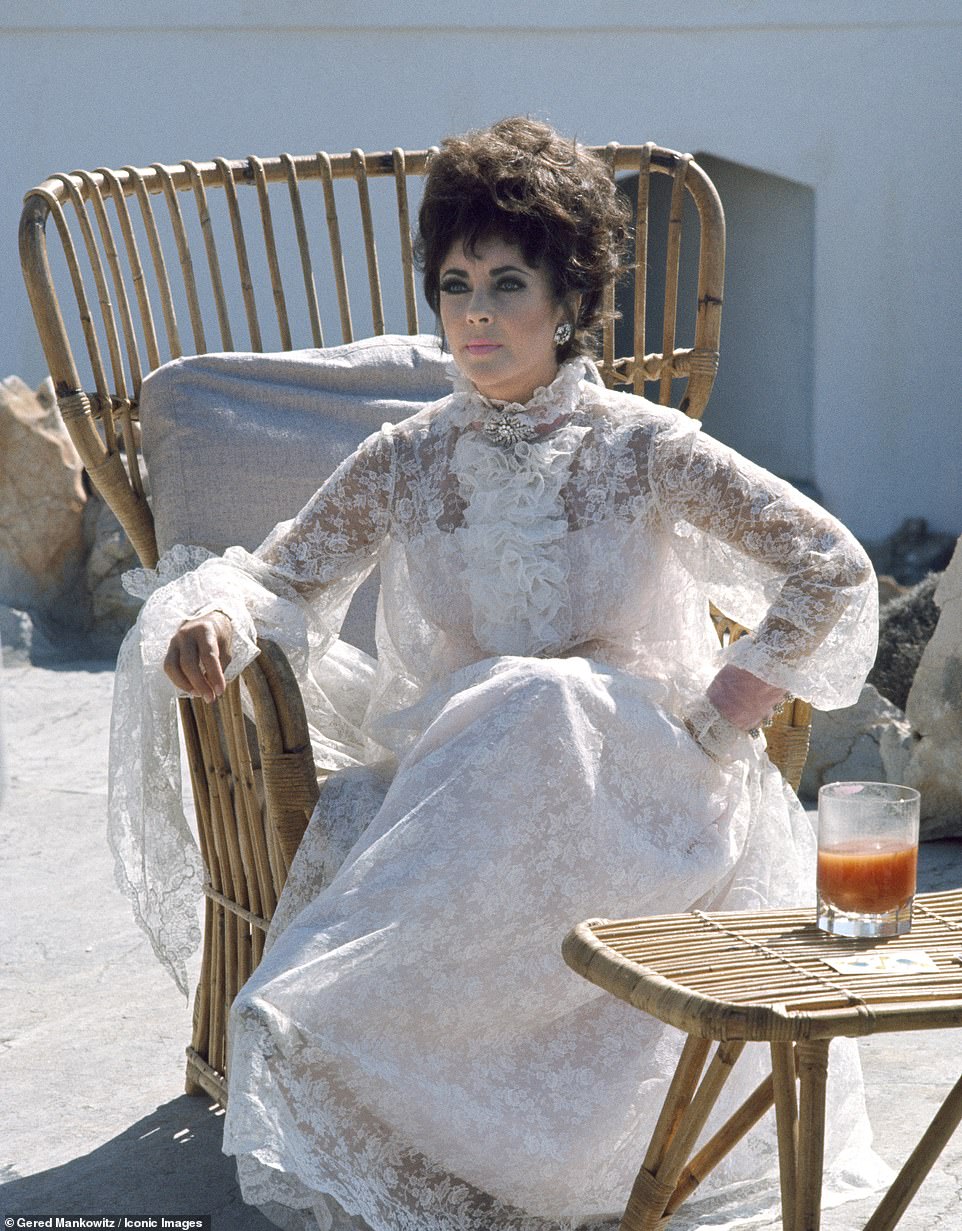 The actress, pictured in a flowing white floral lace dress, was 36 when she took the starring role in the box office hit 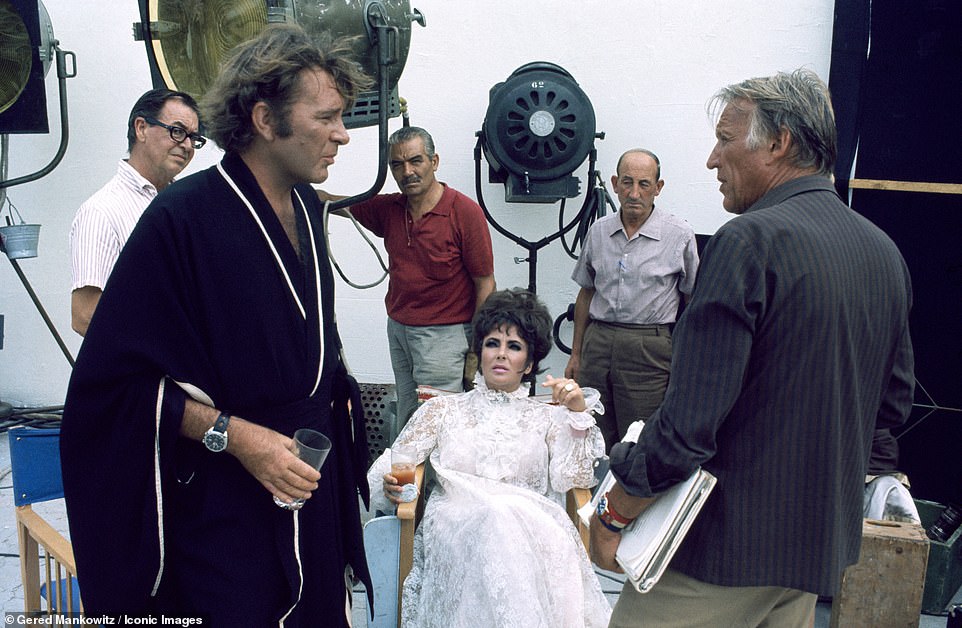 Taylor’s then husband, wearing a dressing gown, is pictured on set talking to director Joseph Losey 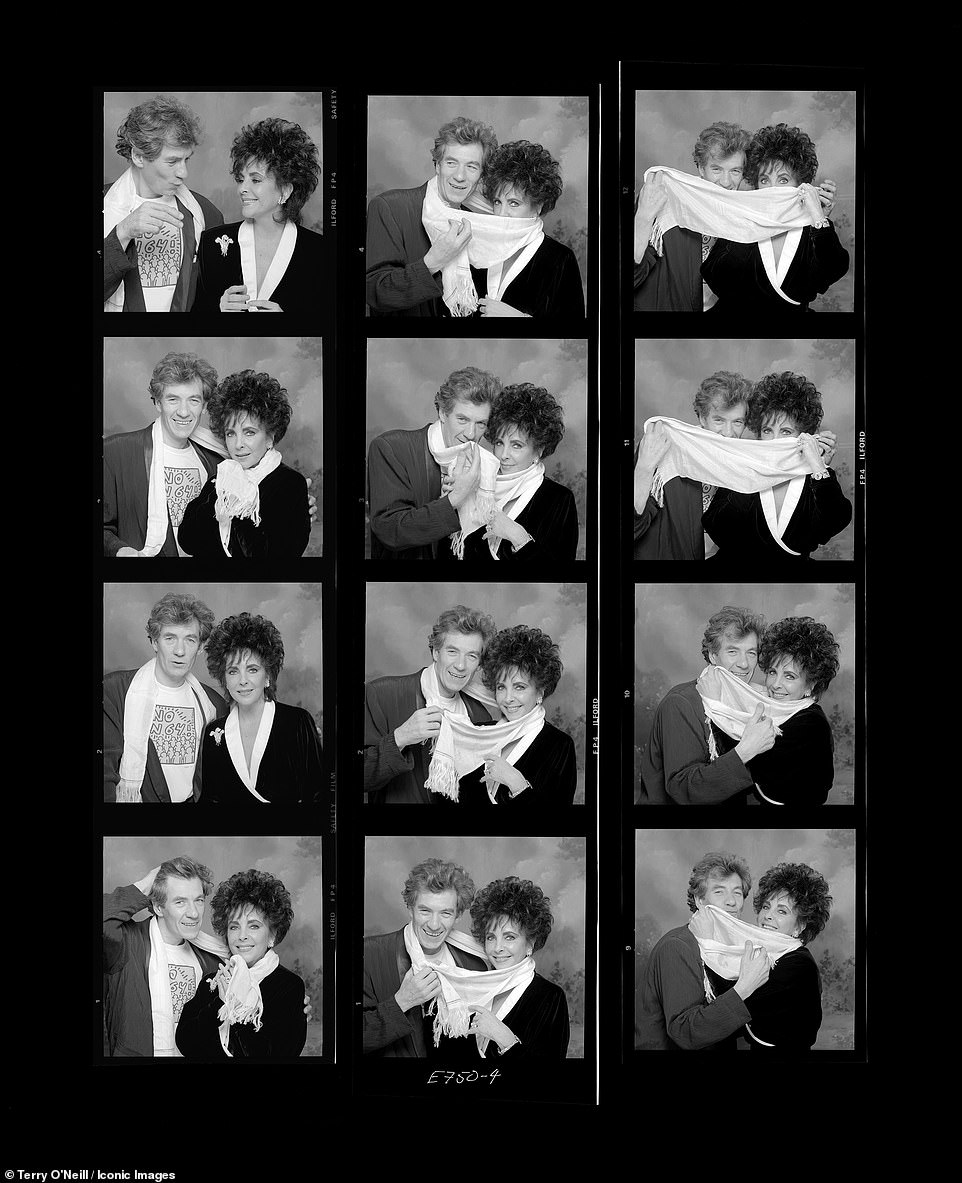 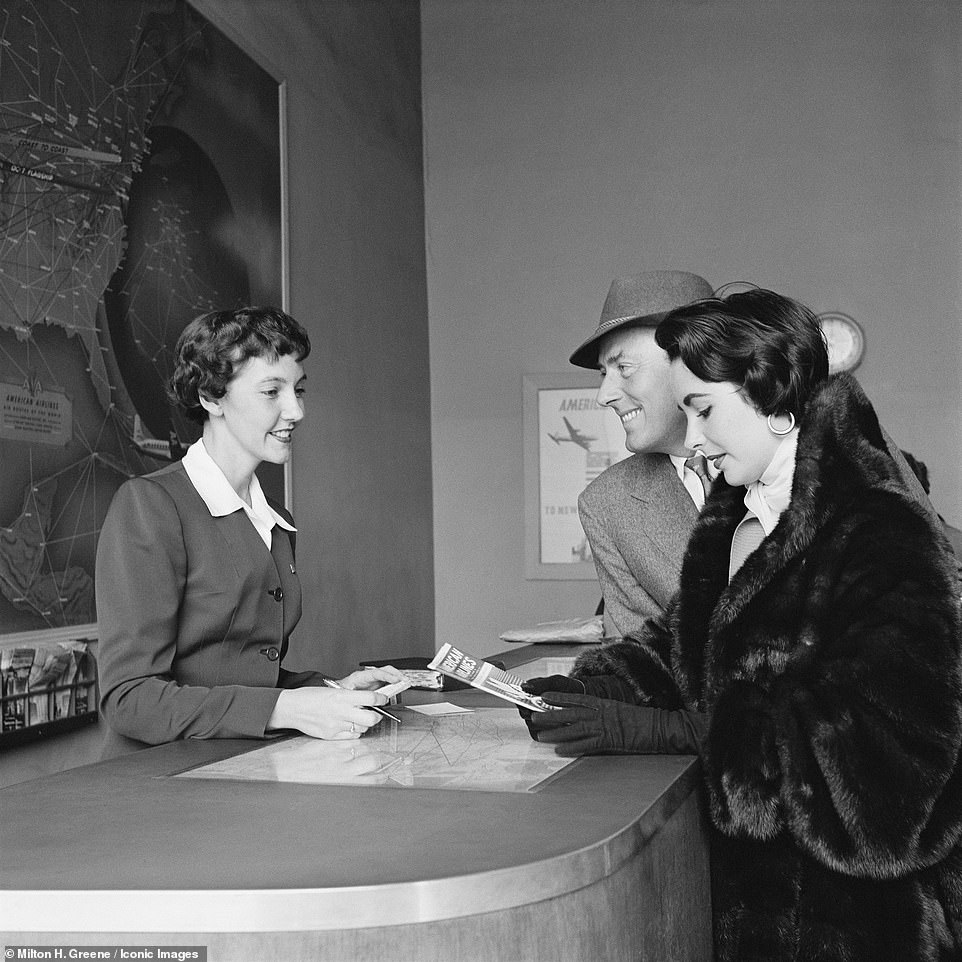 Taylor with her second husband, Michael Wilding, photographed together for an American Airlines campaign in 1955 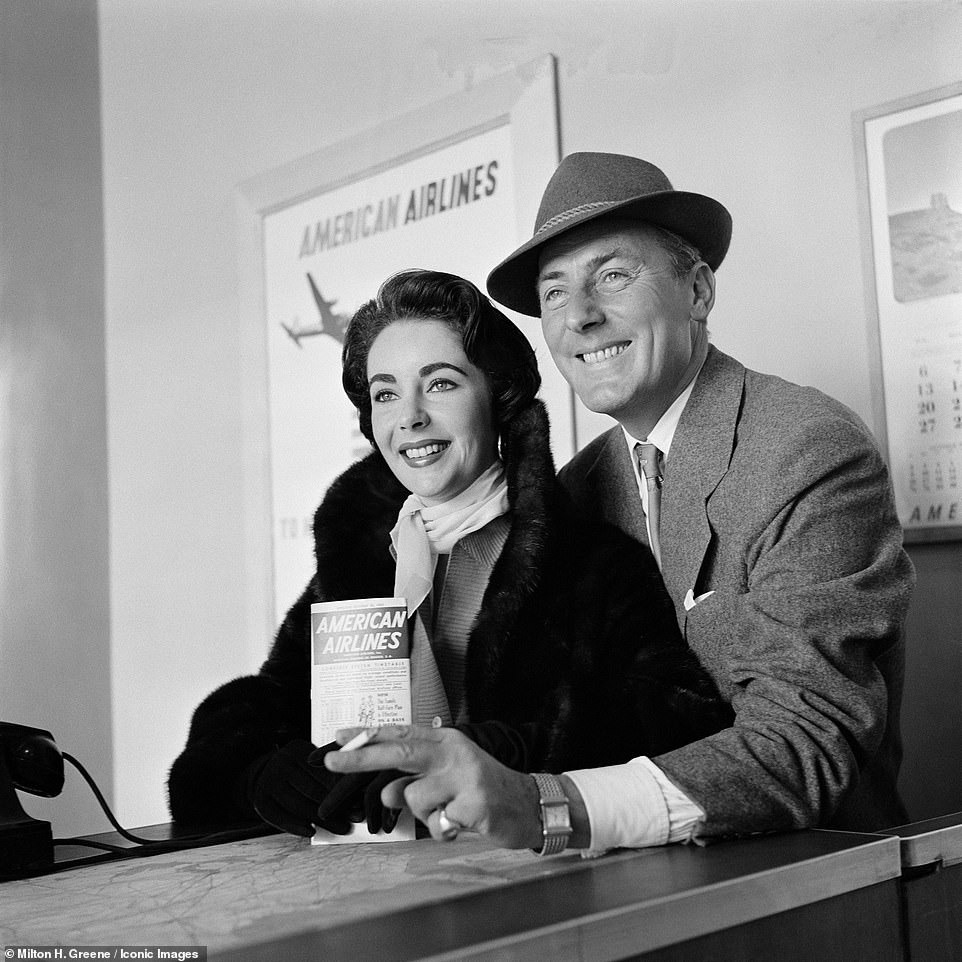 Photographed by Milton H.Greene, the images show Taylor and Wilding in happier times – they were separated in 1956 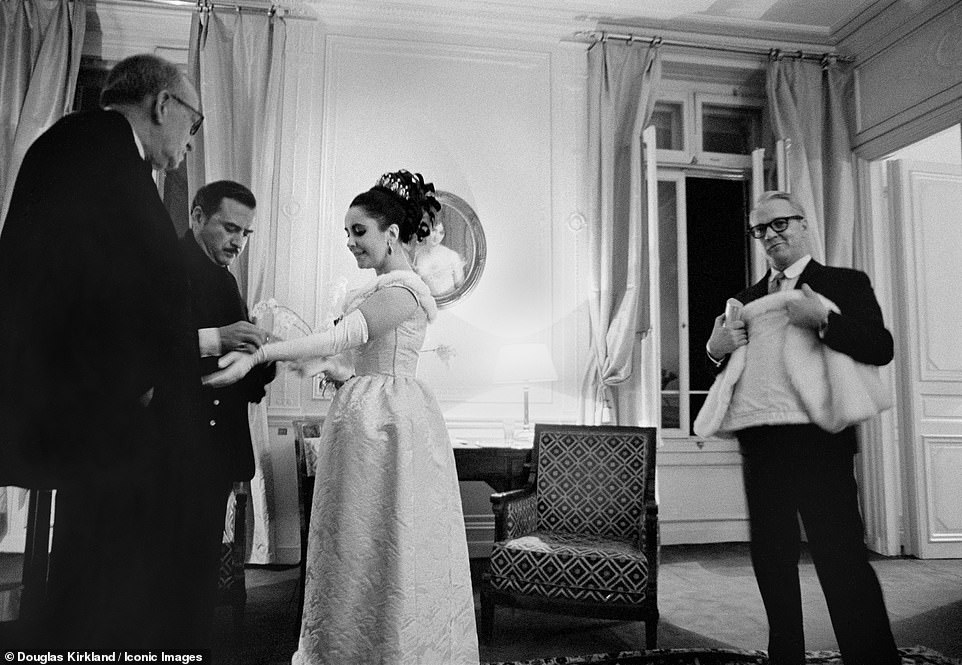 The star getting ready to step out in Paris. One of Taylor’s personal assistants, Dick Henley, is seen in the background,holding her coat in this photograph by Douglas Kirkland in 1963

Following her death, Michael Wilding Jr said his mother, who was made a Dame in later life, was ‘an extraordinary woman who lived life to the fullest, with great passion, humour, and love.’

He added: ‘Her remarkable body of work in film, her ongoing success as a businesswoman, and her brave and relentless advocacy in the fight against HIV/AIDS, all make us all incredibly proud of what she accomplished.’