Is that your daughter?

Isn’t he old enough to be your father?

These are questions my now-husband and I have faced over the years, especially in the early days when we were just starting out together.

But having been happy together for more than 20 years, despite our 22-year age gap, I’ve become indifferent to such facetious comments. Our relationship proves that moralising about consenting adults with large age differences is nothing but hype and tripe.

Chris was the manager of a band that my friends and I would go and see during Manchester’s vibrant music scene in the 1990s. I’d always felt attracted to his zany character, regardless of his distinctly older years and after hitting it off at a gig in 2002, we started dating. I was 24 and just out of university. He was 46.

Although you might assume such an age-difference may be met with drama or derogatory comments, our friends and family were supportive from the start. They recognised that we were happy together and emotionally mature enough to make up our own minds.

They were right. A wedding, two children and two decades later, and we’re still going strong. I defy anyone who upholds the basically unproven assumption that big age gap relationships don’t work and that there must be cynical and unbalanced power dynamics at play.

Our relationship progressed quite quickly. Shortly after we had started dating, we set out to the Bernese Oberland in Switzerland, where we worked for a year in a ski resort.

Living away from home in a strange environment, without much money and in accommodation that wasn’t exactly luxury living, would have been challenging for any new relationship. But for us, living thriftily in a remote part of Switzerland symbolised romance and adventure, and we returned from our travels stronger than ever. 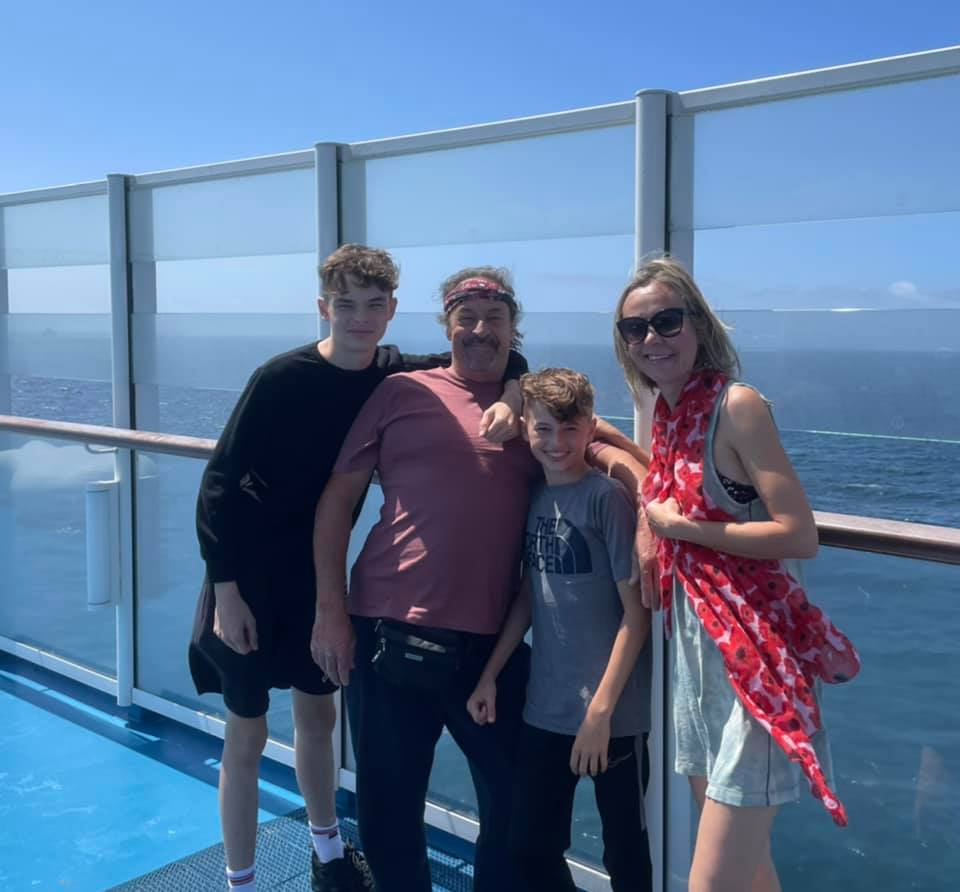 With a shared thirst for travel, our stay in Britain was short-lived and in less than a year, we were back on the road. This time we were in a converted Ford campervan, travelling around France and Spain.

Again, living in cramped conditions with only each other for company was a joy. Travel and experiencing new places and cultures was the recipe for growth and brought us closer than ever.

We eventually settled in a remote part of Andalucía where our time was filled renovating an old farmhouse and selling anything from second-hand books to DVDs at ‘rastro’ markets – the Spanish equivalent of car boot sales!

We have always worked together as a team and energised and inspired each other. Chris was very supportive when I was starting out as a writer, giving me encouragement and motivation.

As well as a mutual love of travel, music has always been a big part of our life, and, despite our age gap, we love the same genres, artists, and gigs.

If I’m honest, the only anxiety that I have ever had about our relationship has concerned mortality, and that being with someone much older than you, generally means you won’t grow old together. I try not to dwell on it too much though.

Couples can spend too much time looking for perfection. I didn’t go out to seek an older partner. Chris and I just found a connection together, and we weren’t going to let our age difference get in the way of that. I think in a way, the age difference made our relationship even stronger as we did genuinely accept each other for who we are.

While family and friends have always seen how happy we are together, any disapproval has only ever been vented by the intrusive prying of strangers. We’d always just shrug off such comments, even laugh at them, deeming them as ignorant, hackneyed and narrow-minded.

Though it must be said, disparaging remarks have been relatively few and far between and, apart from the occasional raised eyebrows and disproving looks, our relationship has been relatively stigma-free.

It makes me question why there is any backlash about age-gap relationships at all and deduce that much of the ‘moral panic’ is touted in the media seeking clickable content.

Take Leonardo DiCaprio, the Hollywood actor who has had a number of girlfriends much younger than him. Following the ending of his relationship with model Camila Morrone this year, DiCaprio’s dating habits were ripped apart. They were even given their own title, ‘Leo’s Law’. Commentators had a field day, equating the actor’s dating history to the ‘devaluing’ of older women in Hollywood and ageing women in general.

DiCaprio’s dating preferences might be geared towards younger women, something that isn’t uncommon among the rich and famous, but I think he’s probably just not found the right person yet or doesn’t feel ready to settle down. People mature emotionally at different ages and being an older partner doesn’t guarantee emotional maturity. Similarly, being younger doesn’t always mean you are less mature.

What I object to is the speculation and sensationalising that goes on about the so-called predatory nature of large age gap relationships.

As a woman in a healthy relationship with a much older man, I resent the prevalent message that age gap relationships are somehow something we must comment on, react to and judge.

Similar hype was hawked during the defamation trial of Johnny Depp and Amber Heard, when reports attempted to link the couple’s troubled relationship to their 22-year age gap, insinuating that power imbalances were at work.

Such media scrutiny is rarely devoted to couples with large age gaps in successful, happy relationships – Hollywood or elsewhere. Take George Clooney and Amal Alamuddin. When they tied the knot in 2014, there was a big hoo-hah about their 17-year age gap. Realising the relationship is robust and without intrigue or drama, their marriage is relatively free from the spotlight.

For me, this negative and assumptious sensationalising sets up a damaging precedent for couples with significant age differences.

In reality, all relationships are complex, and the age of each partner has very little to do with its failure or success. Like our relationship proves, age is just a number.

Age is Just a Number

Welcome to Age is Just a Number, a Metro.co.uk series aiming to show that, when it comes to living your life, achieving your dreams, and being who you want to be, the date on your birth certificate means nothing.

Each week, prepare to meet amazing people doing stereotype-defying things, at all stages of life.

If you have a story to share, email [email protected]