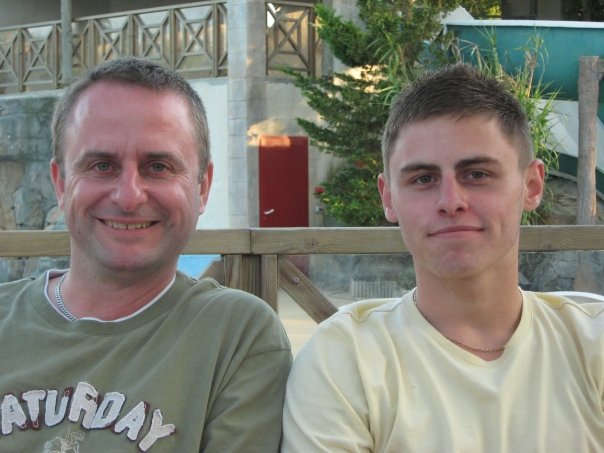 The biggest ‘what if’ for me will always be the phone call that I missed on the day of my dad’s death.

I was 20 years old at the time and he rang while I was at work, so I didn’t answer, thinking I’d get back to him on my lunch break. I had no idea that I’d never be able to speak to him again.

I ended up phoning him back in the evening but I didn’t get through – I didn’t think anything of it.

The next morning, I got another call – but it wasn’t my dad, it was my step-mum to say he’d been missing since last night.

I set off from my home in Biggin Hill with my 18-year-old brother and girlfriend to Staplehurst, Kent, where my dad lived. But just 10 minutes into the journey, my phone rang again.

Our 44-year-old dad had been found dead. It was the worst outcome imaginable.

Being the eldest of four, my immediate thought was for my two youngest brothers who were still at school and had no idea. I went into autopilot.

I don’t think I cried initially. I turned the car around to go back home and decided I would be the one to give my brothers the devastating and unexpected news.

Telling them was the hardest moment of my life – they were 14 and 16 at the time; having to explain that they were never going to see their dad again and there was no real reason as to why.

Suicide was something we were all aware of, but only from afar; we had never expected it to impact us in such an acute way. Still, to this day, when I hear people talking about suicide or I read something, my body tenses up and I have to force myself to get through the pain of that conversation.

Although there was an inquest into his death, we didn’t get many answers. It probably left us with more questions, if anything. We found out that my dad had had pretty severe money issues, which he had kept well hidden. He was divorced from my mum so had six children to provide for.

My memories are a little hazy now, but on the day of his death, I believe a forklift driver had driven into his new car. Most people would find this annoying, but for my dad, already on the edge, it set off a chain reaction. I will never know if he had planned it for a long period of time or whether it was the worst ‘in the moment’ decision anyone could make.

The notes he had left for each of us suggested it was something that went very deep, and in his mind, this was the best possible decision he could make for his family. I think he truly believed we were better off without him.

The notes stated that he thought he was a really bad dad but coupled with the money issues he had, my assumption was that he thought killing himself would get rid of any debts he had. We had no prior knowledge of any depression or mental health issues at all.

In fact, my dad was the life and soul of the party.

He made family gatherings entertaining for everyone and always had a smile on his face. He was a brilliant dad to all of his kids and his two step-children after bringing them up since they were young.

On some days, I take solace that he is at peace and he’ll never have to endure the battles that were happening in his mind. On other days, the anger feels just as raw as it did almost 11 years ago when it first happened.

That’s when I think about the hurt that he has caused his family, including the unborn child that he left behind that my step-mum has brought up alone.

I think most of all, it’s the sadness I feel that he had to go through all of it alone. He put a brave face on for so long, and right up until his death, kept piling more on to his own shoulders so he could keep everyone around him happy.

As a dad myself now, with the responsibility of a family and the daily stresses of work, I can understand how it’s possible for someone to get to a point where they feel like they’re drowning and there’s no way out. But that’s why it is so important to have a network around you that you can talk to.

There is a reason the safety procedure on planes tells you to put your own mask on before you help others. In order to be the best dad, the best friend and the best partner, you have to be in a position mentally to talk to others and share your own worries and pains.

Losing my dad in this way was the hardest lesson of all, but as a mark of respect to him, the least I can do is learn from it and share what I learn with others.

My final words are for the people left behind.

On average, every suicide leaves around six or more ‘suicide survivors’, which are ‘people who’ve lost someone they care about deeply and are left with their grief and struggle to understand why it happened’.

There’s a quote by that I can very much relate to: ‘The person who completes suicide, dies once. Those left behind die a thousand deaths, trying to relive those terrible moments and understand… why?’

For those left behind, it is especially important to seek help and try to process the loss with a professional. It took me almost eight years to talk and it was a huge weight off my shoulders when I finally did.

Although I’ve come to terms with my dad’s death, my biggest regret in life is not picking up that phone call so I could tell my dad how much I love him and that we’d get him through whatever he was battling.

You can donate to Chris Door’s Movember fundraiser here.