A mother whose three children all died from cystic fibrosis penned a heartbreaking letter describing the ’empty space’ that now surrounds her at Christmas – and says losing a child is like ‘having your heart torn out and your stomach emptied’.

She wrote the letter, published in the Irish Times at the weekend, to mark the first anniversary of Fergal’s death, and described the festive period as a ‘black surround, without tinsel’. 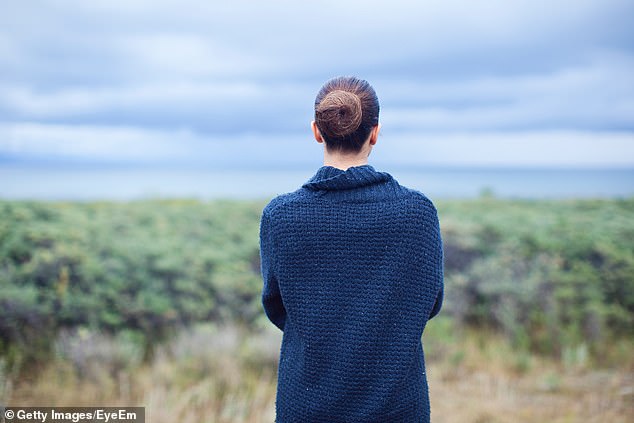 A mother whose three children all died from cystic fibrosis penned a heartbreaking letter describing the ’empty space’ that now surrounds her at Christmas – and says losing a child is like ‘having your heart torn out and your stomach emptied’. Pictured: stock image

The moving letter sparked an outpouring of support, with many readers sharing it online and commending her bravery and ‘awe-inspiring’ strength.

Kathleen told how Gráinne contracted the bacteria burkholderia cenocepacia – potentially lethal for cystic fibrosis sufferers – when she was eight, and it ‘sort of bled into the other two’.

She admitted to feeling angry, claiming she wasn’t given any advice by the Health Service Executive (HSE) to separate her kids to avoid it spreading.

‘This is what eventually killed my three children,’ Ms Keyes told the Irish Times.

‘I am angry. I have a lot of anger there. Can you can imagine how awful that is to live with? I wouldn’t want you to. That on top of losing them, one by one.’

Kathleen described her three children as ‘wholesome and lovely’ as well as ‘mad and witty’, adding that the suffering they had to endure ‘evolved them’. 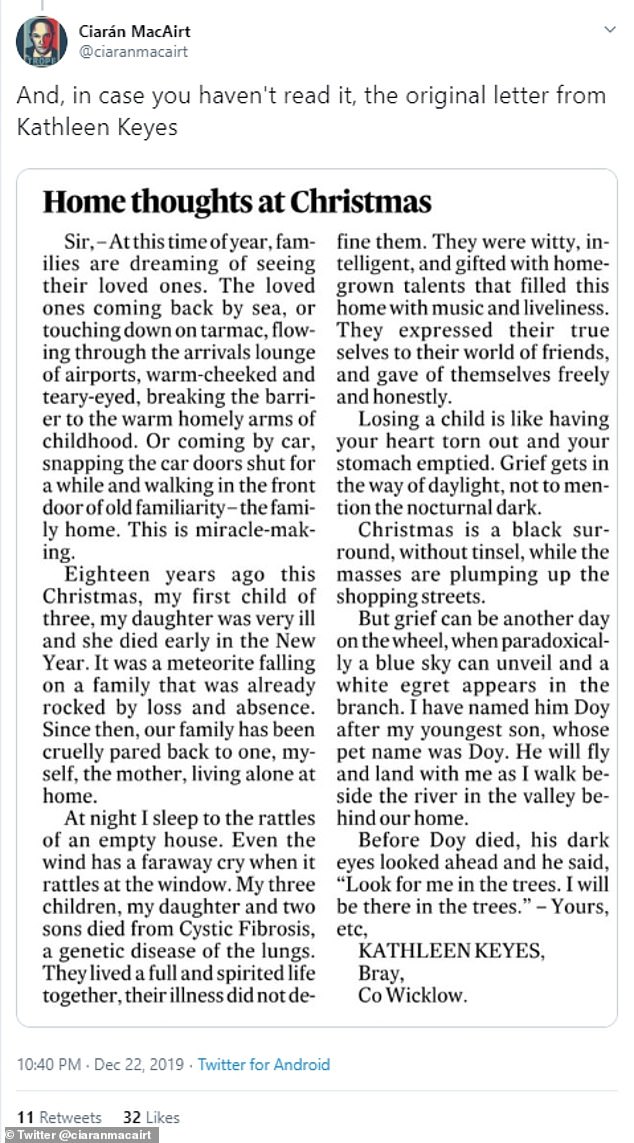 The moving letter sparked an outpouring of support, with many readers sharing it online and commending her bravery and ‘awe-inspiring’ strength

Writing in her letter, she explained how when Gráinne, her first child, fell ill 18 years ago and died early in the New Year, it was like a ‘meteorite falling on a family that was already rocked by loss and absence’.

‘Since then, our family has been cruelly pared back to one, myself, the mother, living alone at home,’ she went on.

‘At night I sleep to the rattles of an empty house. Even the wind has a faraway cry when it rattles at the window.’

Though her daughter and two sons all died from cystic fibrosis, a genetic disease of the lungs, Kathleen said their illness ‘did not define them’.

‘They expressed their true selves to their world of friends, and gave of themselves freely and honestly,’ she wrote. 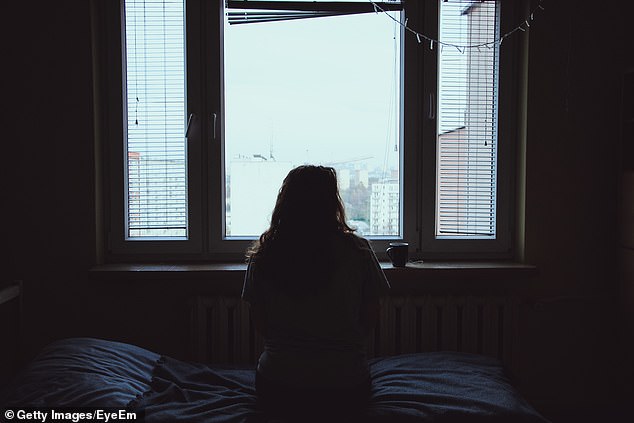 Kathleen wrote the letter, published in the Irish Times at the weekend, to mark the first anniversary of Fergal’s death, and described the festive period as a ‘black surround, without tinsel’. Pictured: stock image

‘Losing a child is like having your heart torn out and your stomach emptied. Grief gets in the way of daylight, not to mention the nocturnal dark.’

Much of Kathleen’s life with her children was looking after them and attending hospital appointments, and now she said she feels there is an ’empty space’ around her.

‘Sometimes I feel like I’m cycling at the edge of the world now. I don’t know where I am. There is too much space around me now,’ she said.

What is cystic fibrosis?

Cystic fibrosis is caused by a faulty gene that a child inherits from both carrier parents.

The gene, known as the cystic fibrosis transmembrane conductance regulator (CFTR), is responsible for controlling the movement of water in and out of cells.

The fault leads to the mucus produced throughout the body becoming thick and building up in the lungs and digestive system.

Classic complications of the condition, which tend to present in infancy, include chronic infections, breathlessness, digestive problems and even infertility.

No cure currently exists and figures suggest half of sufferers will die before they’re 31.

Kathleen has not been well herself; she was hospitalised twice in the past year with Neurosarcoidosis – an inflamation on the brain, which her doctors have said has been worsened by the stress of caring for her children.

Speaking about Christmas last year – three weeks after Fergal died – she recalled sitting in her living room crying as she visualised where her children’s toys would be before going to the cemetery, lighting candles and speaking to them.

Kathleen described watching people busily Christmas shopping and experiencing a longing to tell them to slow down and think about the meaning behind what they’re doing.

She admitted she always thought Fergal would survive. His girlfriend Becky is also ‘heartbroken’ at his passing.

Speaking about why she decided to share her open letter, Kathleen said there was something in her ‘calling me to speak’, and also a ‘need to let people know this story, make people aware of what they have in having their families around them’.

Kathleen, who recently completed a masters degree in poetry, admitted she ‘couldn’t say’ where she gets her strength from to keep going, but takes solace in meditation and ‘survival writing’.

‘I am writing from a place within myself,’ she told the publication. ‘The letter was just a personal letter. There were lots of other things coming out of it – I was aware of that – but I didn’t expect anything like this sweep of a response.’