Melania Trump looked elegant in a navy ensemble as she and President Trump arrived in the UK for the start of their State Visit.

The First Lady, 49, plumped for a classic knee-length pencil skirt and matching blazer as she stepped off Air Force One at Stansted Airport this morning.

In an apparent nod to the upcoming D-Day anniversary, Mrs Trump paired the suit with a £650 ($820) Burberry blouse printed with military medals.

President Trump reached for his wife’s hand as they crossed the runway and made their way to the waiting Marine One helicopter. 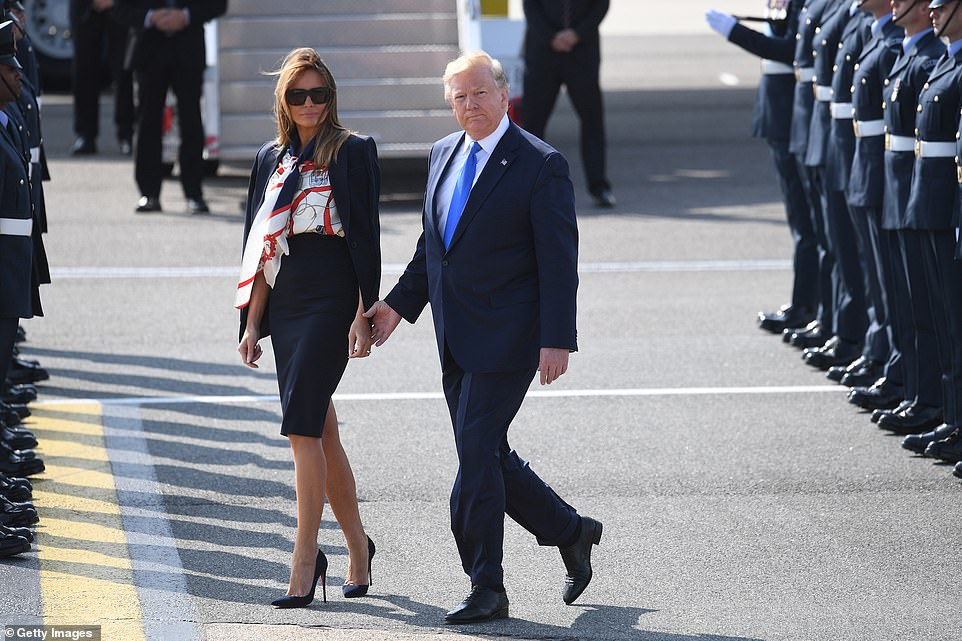 Melania Trump looked elegant in a navy ensemble as she and President Trump arrived in the UK for the start of their State Visit. The couple will meet the royal family and attend a state banquet during their three-day whirlwind tour 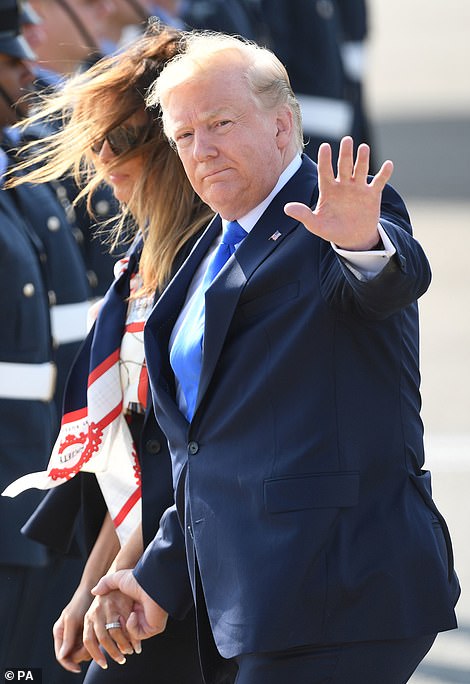 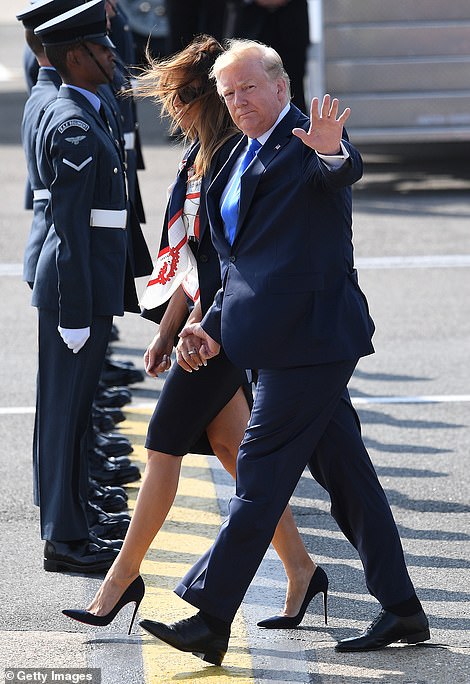 President Trump reached for his wife’s hand, pictured left and right, as they crossed the runway at Stansted this morning 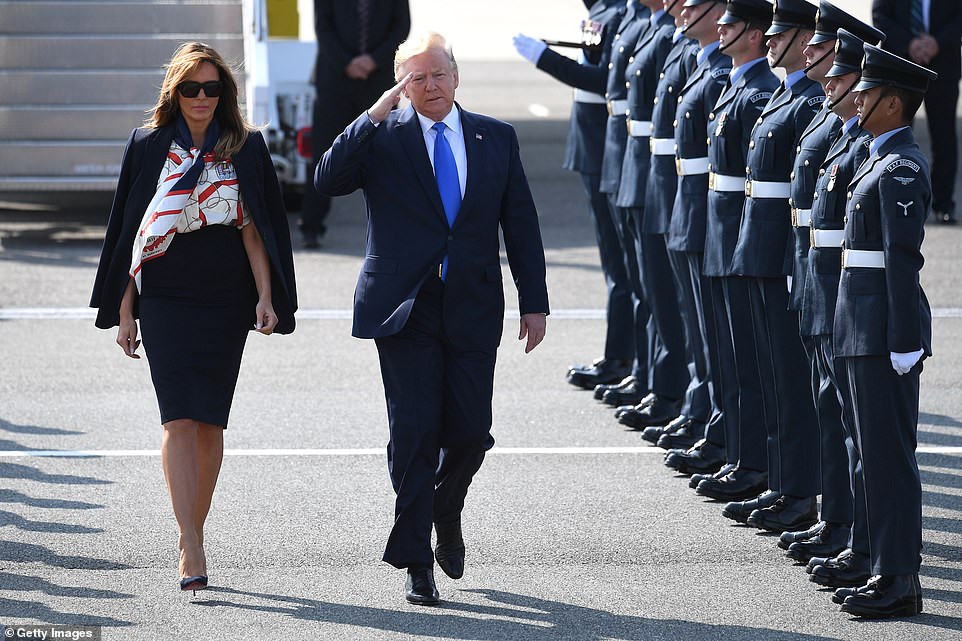 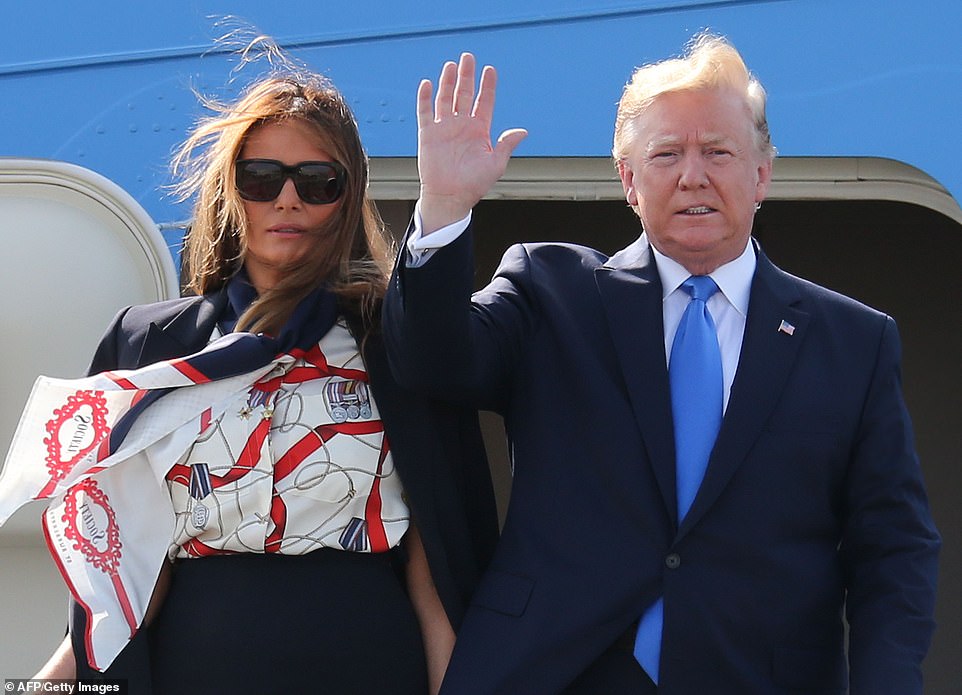 The Burberry blouse, pictured features military medals and is in red, white and blue – the colour of both the UK and US flags

The President and First Lady are in the UK for a whirlwind three-day tour which will see them dine with the royal family and commemorate the 75th anniversary of D-Day.

Today the US President and First Lady Melania will head to Buckingham Palace for lunch with the Queen and the Duke of Sussex. The Duchess of Sussex will not attend as she is on maternity leave.

They will later attend an afternoon tea hosted by Prince Charles and the Duchess of Cornwall at Clarence House.

This evening the couple will be guests of honour a state banquet hosted by the Queen at Buckingham Palace, which will be attended by senior royals including the Duke and Duchess of Cambridge. 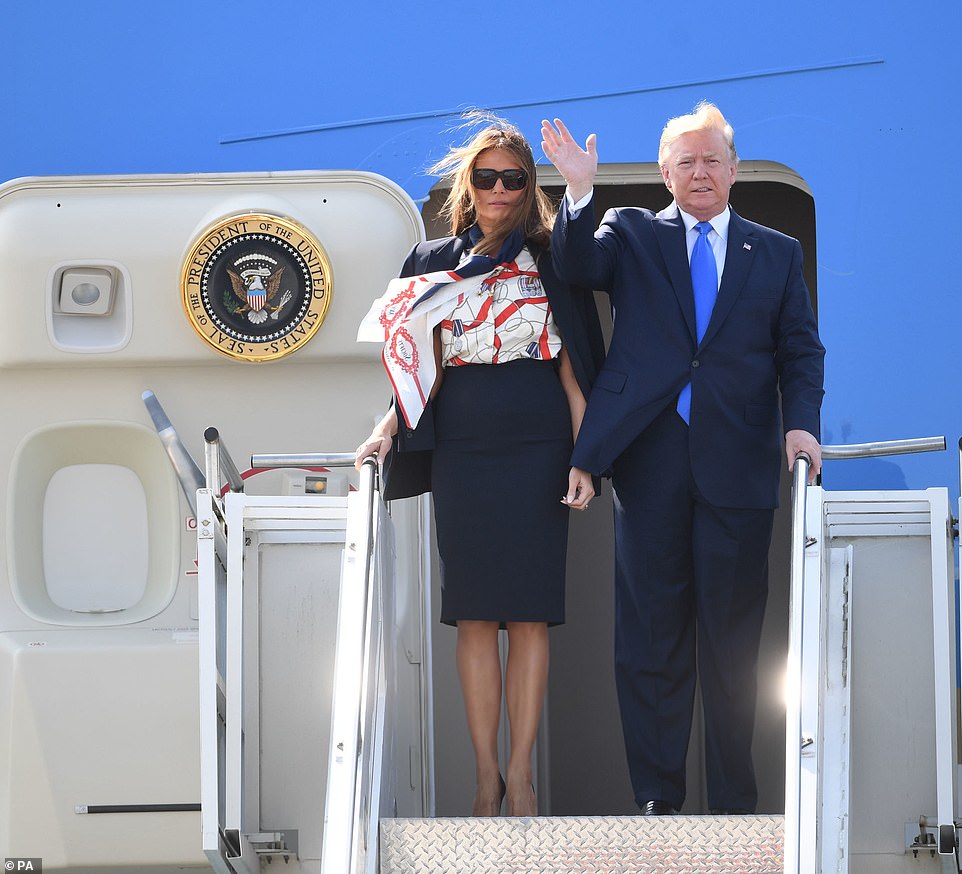 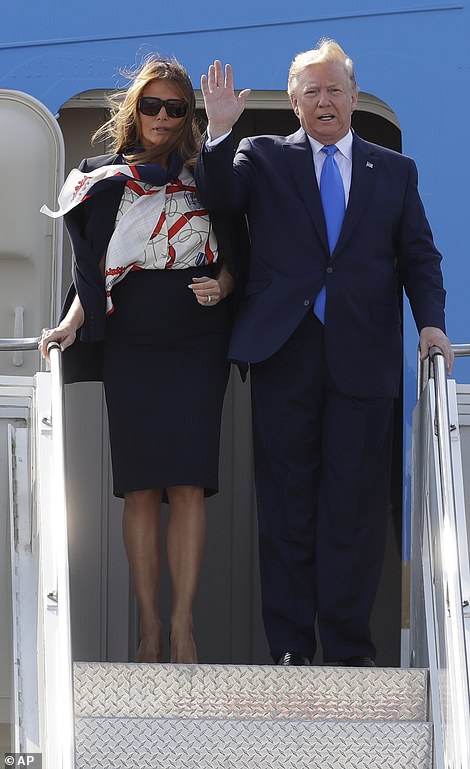 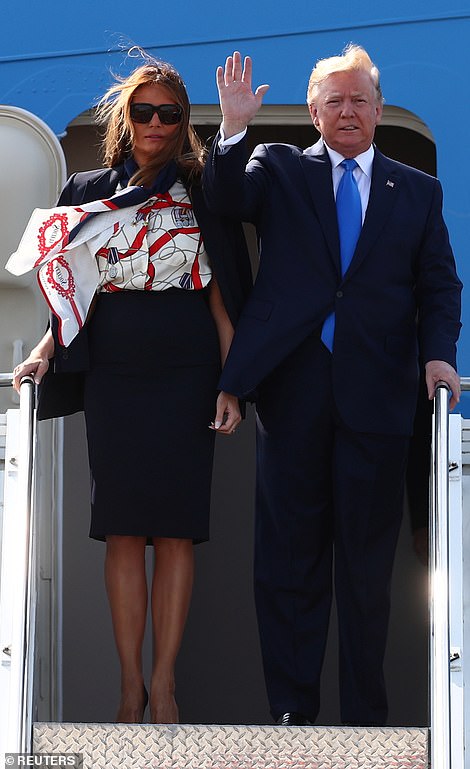 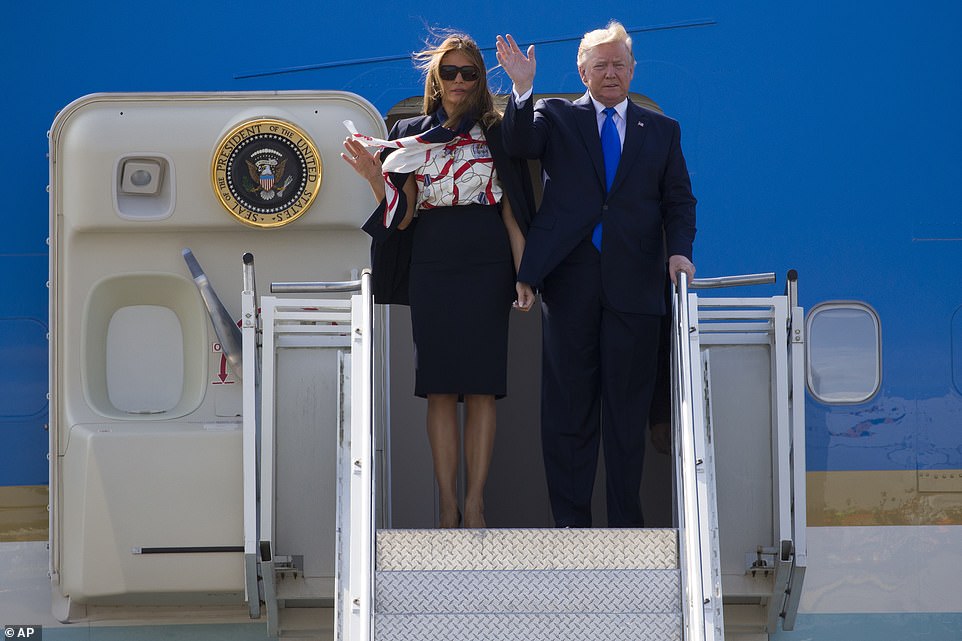 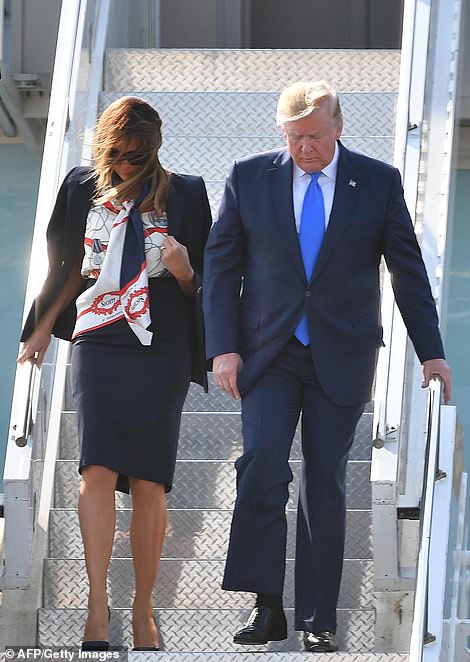 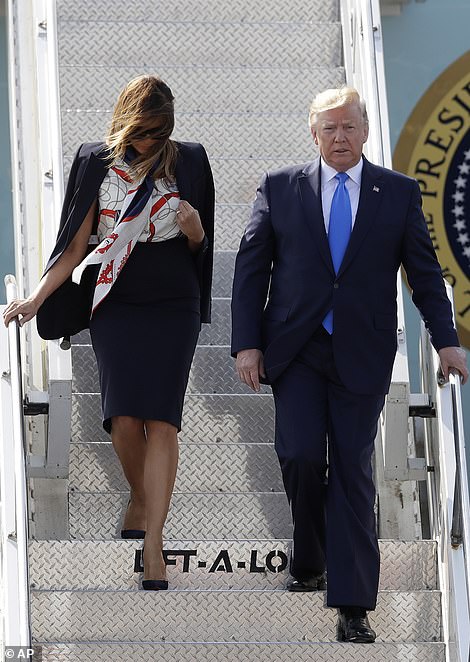 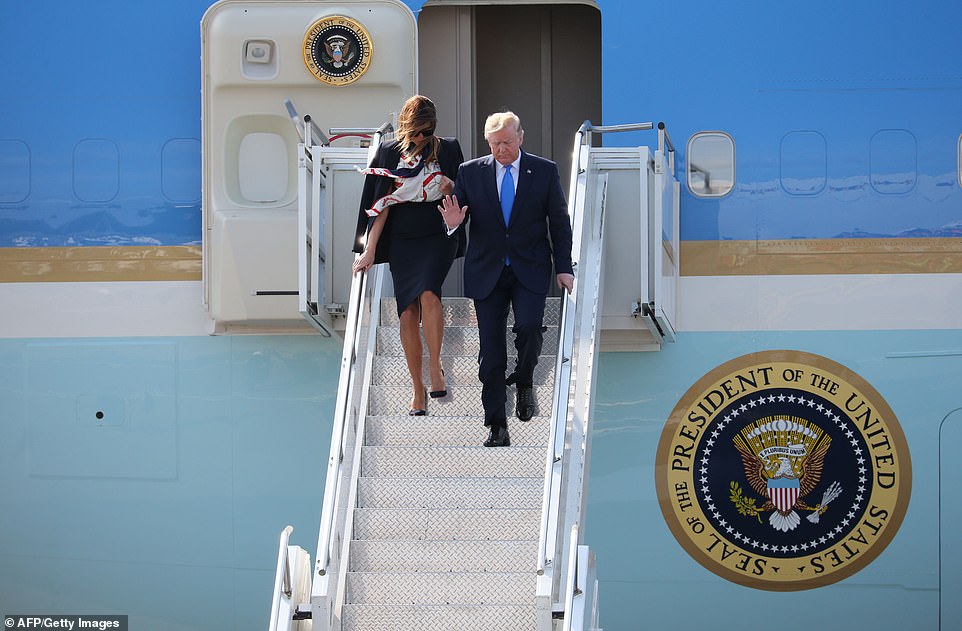 The glittering reception has been boycotted by a handful of high profile figures including Labour leader Jeremy Corbyn and Vince Cable of the Liberal Democrats.

While the President and First lady are expected to be met by protests in central London, there was no sign of disruption on their arrival in Stansted Airport, which is roughly an hour’s drive from the capital.

Foreign Secretary Jeremy Hunt was waiting for the President at Stansted as he landed and briefly held hands with Melania before he boarded the Marine One helicopter and headed for central London. 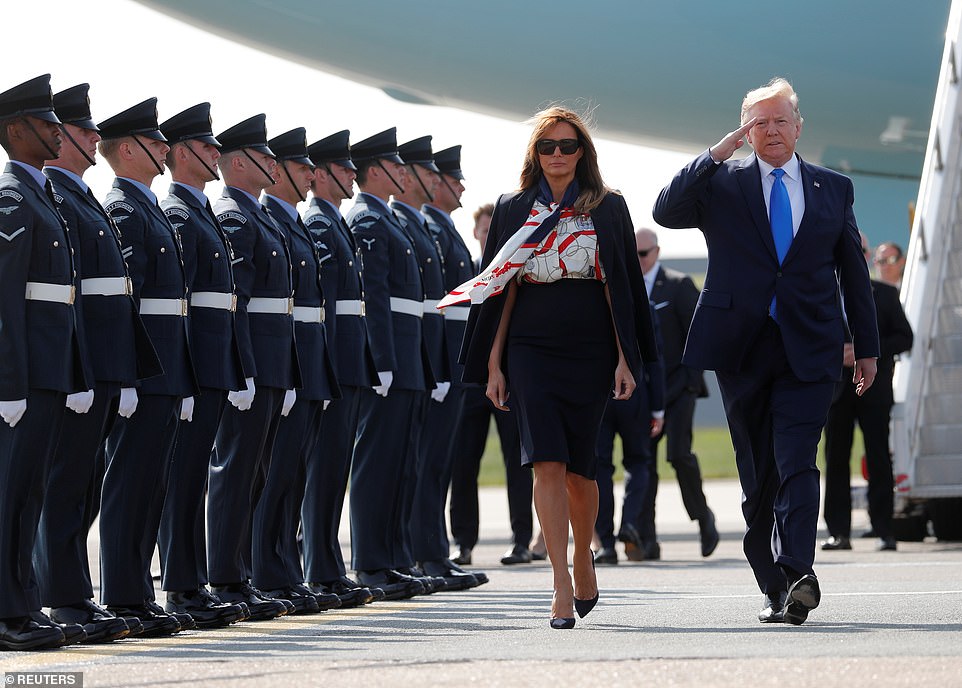