A man who was groomed as a 10-year-old by a ruthless ‘Jekyll and Hyde’ crime lord who forced him to peddle and take drugs, abused him and even ‘raped’ him has told how he still lives in fear of his life 16 years after helping send him to prison.

Father-of-two Joey O’Callaghan, now 35 with a new identity, was recruited by gangster Brian Kenny as a schoolboy in Blanchardstown, west Dublin, where he and his family lived near the infamous heroin gang The Westies.

Believing he’d found himself a job delivering milk to earn himself some pocket money, Joey soon found himself embroiled in a dark criminal underworld.

Kenny demanded he used his round to drop off bags of drugs – and Joey witnessed the horrifying punishments dealt out to customers who didn’t pay their dues.

Father-of-two Joey O’Callaghan, now 35 with a new identity (pictured), was recruited by gangster Brian Kenny as a schoolboy in Blanchardstown, west Dublin, where he and his family lived near the infamous heroin gang The Westies

In 2004, after witnessing Kenny and his accomplice Thomas Hinchon murder 25-year-old Jonathan O’Reilly in cold blood, brave Joey betrayed his gangland cronies and went to the police, with his evidence leading to the conviction of both men.

At 19, Joey became the youngest person to enter Ireland’s Witness Protection Programme – but while he doesn’t regret ‘doing the right thing’ and coming forward, Joey claims a lack of support left him destitute and suicidal.

He details his experience in a new book, The Witness, penned by investigative journalist Nicola Tallant, and insists he too was condemned to a life sentence by speaking out.

‘I could die any day now. There’s probably a good chance I’m going to die with a bullet because of what I’ve done,’ Joey told The Sun. 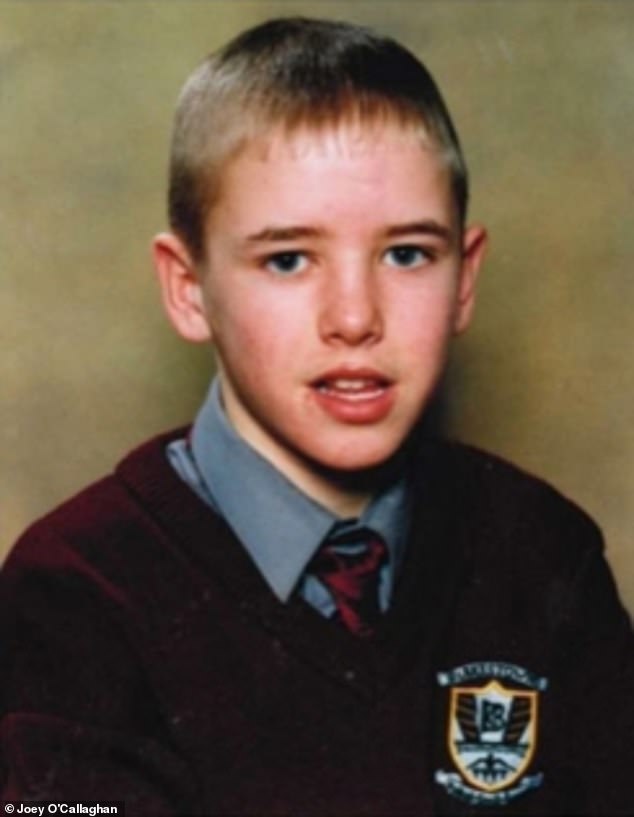 Believing he’d found himself a job delivering milk to earn himself some pocket money, Joey – pictured as a young teenager – soon found himself embroiled in a dark criminal underworld

‘I’ve been in a room by myself for the last 16 years. I can go to the shop, but I have to wear a bulletproof vest, a mask, a hat, a scarf around my face.

‘There’s alarms all over my house, CCTV cameras everywhere. I have a panic alarm with me, all my windows are bulletproof. That’s the way I live my life.

‘I’ve done the sentence with them. The only difference between me and Kenny and Hinchon is I can open my door, they can’t.’ 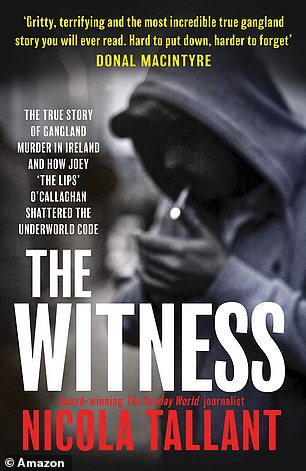 Joey details his experience in a new book, The Witness, penned by investigative journalist Nicola Tallant

With Kenny recently being moved to an open prison and allowed out on day release to see his family, Joey said he is increasingly fearful – especially given he’s heard the bounty on his head could be as much as £75,000 due to him being considered ‘a rat’.

Speaking to the Irish Mirror, Joey said his childhood job on a milk float has resulted in a life sentence.

‘I take 13 tablets a day and I suffer post-traumatic stress, depression, anxiety and severe OCD checking the doors and looking at the windows,’ he explained.

‘I wake up and think [Kenny] is in the room or calling me. The night fears never go away but I have accepted my fate and come to terms with it.’

Speaking about Kenny, he added: ‘He’s been out 14 times since 2012, for his son’s communion, for Easter, for Christmas. I haven’t seen my daughter 14 times since 2004 or been to her Communion and Confirmation, where is the justice in that?’

Joey described his former boss as being ‘like Jekyll and Hyde’ – telling him he loved him like a son one minute and ‘beating the s***’ out of him and ‘abusing’ him the next.

He recalled being ‘absolutely thrilled’ when he thought he’d managed to secure a job to earn pocket money, with Kenny reassuring his mother it would keep him away from the local drugs gang. 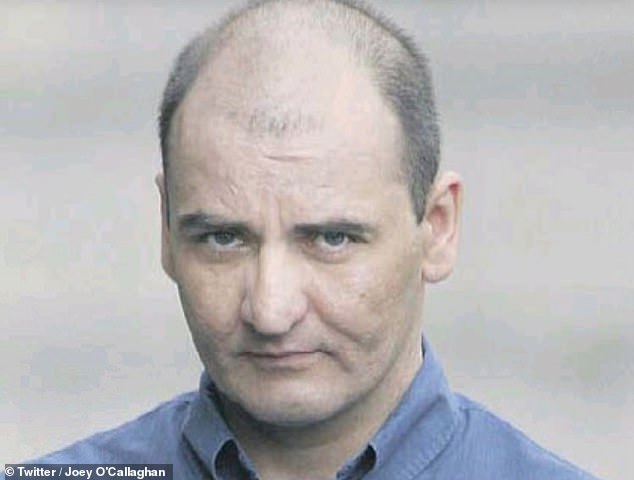 Joey described his former boss Brian Kenny, pictured, as being ‘ like Jekyll and Hyde’ – telling him he loved him like a son one minute and ‘beating the s***’ out of him and ‘abusing’ him the next

But after a few months, Joey witnessed his boss’ violent side first hand when he beat up a young lad whom he believed had stolen from him with a hammer.

He recalled hearing the boy’s screams and bones ‘cracking’ as Kenny ‘smashed him all up’ before using milk to wash his hands and warning Joey he’d meet the same fate if he ever robbed from him.

That same week Joey was forced to deliver his first batch of drugs, instructed to put bags of heroin through the letterbox. Within weeks he was tasked with offloading 300 bags a night, collecting £4,000 in payments and handing it to Kenny along with the milk money.

He recalled how, during one of his drug runs, a young girl collected the envelope full of heroin he’d deposited through the door and delivered it to her mother who lay sprawled on the couch. 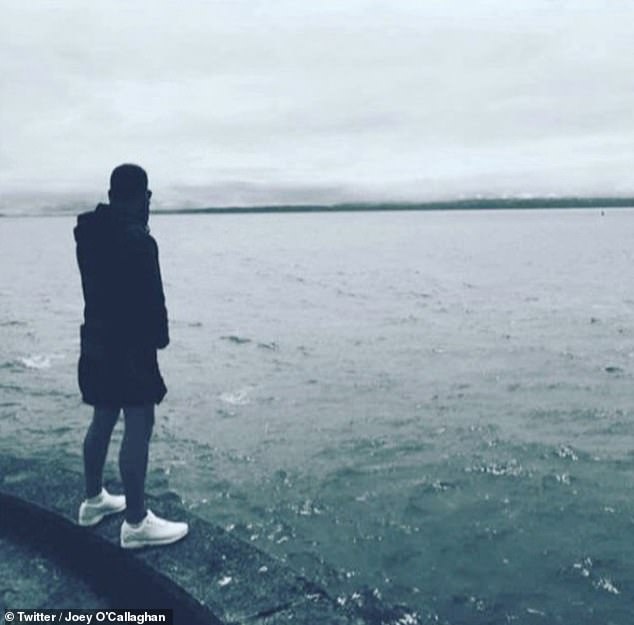 Joey felt trapped, made worse when he was forced to move into the mob’s pad, where he was prevented from escaping by an electric fence. It is there that Joey alleges he was raped and sexually abused by Kenny – who nicknamed him Joey The Lips – in his ‘man cave’.

He claims the gang fed him cocaine to rev him up for deliveries and Valium to counteract his comedowns – while he was threatened with death if he tried to leave.

‘We went from little bags to ounces. We’d have jeeps coming from England and they’d be full of heroin,’ Joey told The Sun.

‘If I wasn’t bagging it, I was delivering it. It was 24 hours, seven days a week. Christmas morning, I’d be out delivering heroin.’

Breaking point came for Joey after he witnessed Kenny and Hinchon assassinate Jonathan O’Reilly as he sat in a car outside Cloverhill Prison.

Afterwards Joey told how the murderous duo returned to the gangland house and ordered him to cut up their clothes and boil them on the stove, and hide the murder weapon in a field. 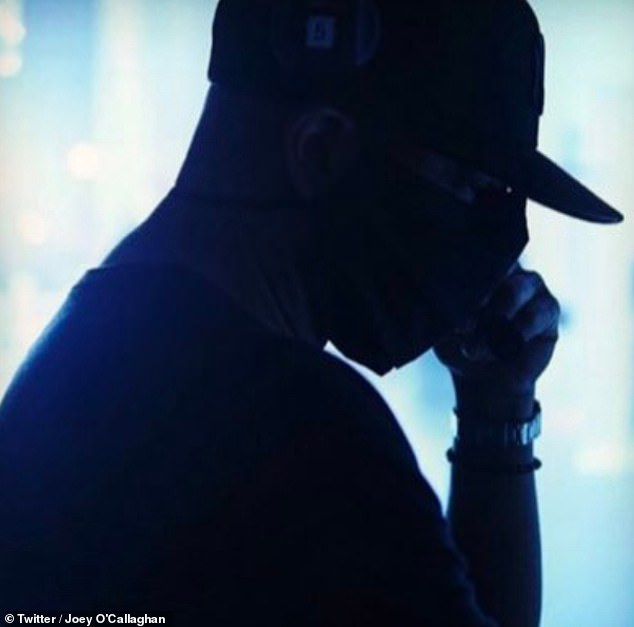 Joey, pictured, entered the Witness Protection Programme, meaning he had to move miles away from his family, and claims he still ‘lives like a ghost’ to this day

From then on, Joey grew increasingly worried for his own safety – made worse when Kenny ordered him to stand in a field and fired a gun above his head and either side of his body before thrusting the barrel in his mouth and threatening to ‘blow his head off’.

He claims the rapes got worse, as did the abuse – recalling how Kenny would ‘hit him with a sewer rod’ rendering him unable to walk.

Unable to stop thinking about Jonathan’s grieving family, he eventually made the brave decision to escape and report his bosses to the police – believing if he was going to die, at least it was for ‘doing the right thing’.

Thanks to Joey’s evidence, Kenny, then 36, and Hinchon, then 25, were jailed for life for murder – as well as receiving a conviction for threatening to kill Joey.

Joey entered the Witness Protection Programme, meaning he had to move miles away from his family, and claims he still ‘lives like a ghost’ to this day. He was eventually signed off the programme and claims he’s now in a good place, with a job and regular medication for his mental health struggles.

Despite rarely being able to see his own family including his two children, the thought of Jonathan’s getting the justice they deserved means he has no regrets.

The Witness by Nicola Tallant (RRP £12.99) is published by Mirror Books on September 3.

Spoilers: Huge conflict for Aaron and newcomer Ben in Emmerdale