Pensioner, 83, who found love at first sight with a man 40 YEARS her junior reveals they still enjoy an active sex life – and insists they’re more in love than ever after a decade of marriage

A devoted couple with a 40-year-age-gap have told how their love has continued to blossom and that they still enjoy a happy sex life – proving their doubters wrong.

The husband and wife of 14 years who spend their evenings cuddling on the sofa ‘like a couple of kids’, are unfazed by public displays of affection despite their age difference.

Revealing that they are madly in love, Edna said: ‘We are still intimate in the bedroom as much as any couple in love. 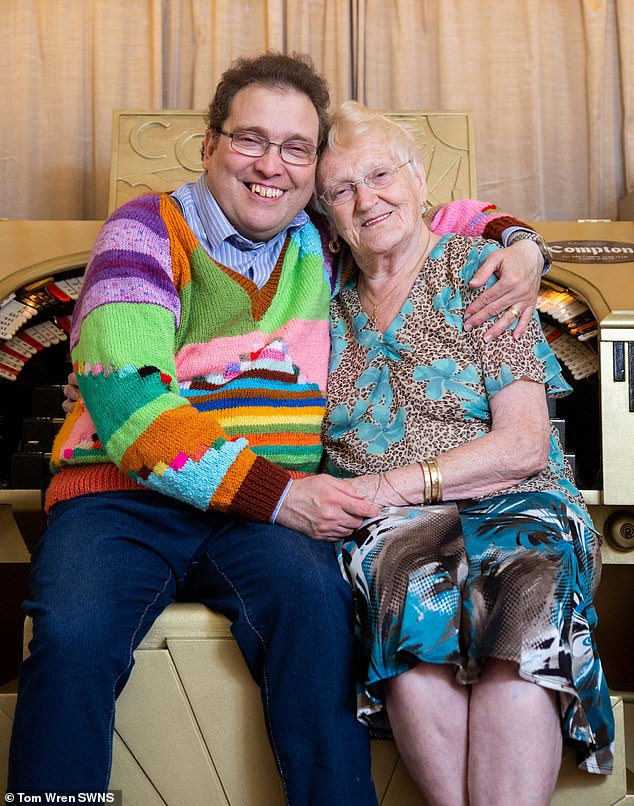 Simon Martin, 44, and Edna Martin, 83, (pictured) from Weston-Super-Mare, Somerset, reveal how their love has grown despite their age difference in tonight’s episode of Age Gap Love: Did It Last? 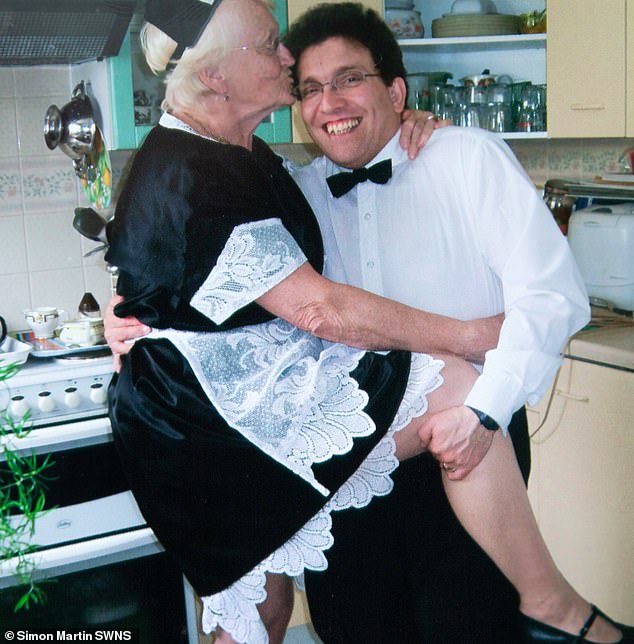 The couple (pictured in 2009) who’ve been married for 14 years, first met at a concert at the Odeon in Weston in 2003 and made headlines when their love became public in 2005 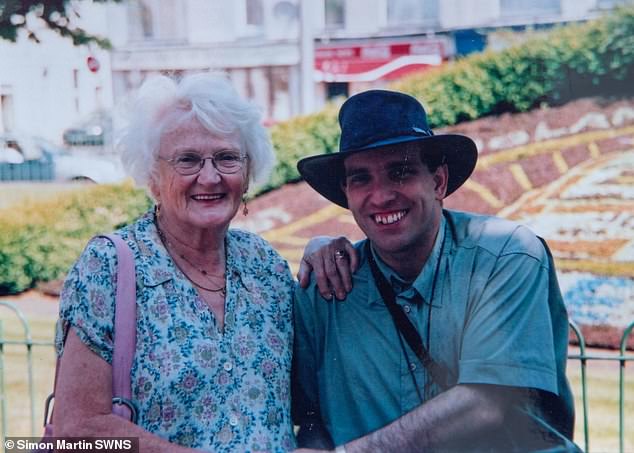 ‘We’ll often stop in the street and have a damn good kiss – I’ve never felt conscious of the age gap in public.

‘I kiss Simon’s neck and pinch his bum in the supermarket – he will twang the back of my bra in the queue. We just do what two people in love do.’

The couple made national headlines in 2005 when their love became public. Cynics accused Edna who is now a great-grandmother-of-one, of looking for a naive toyboy.

However in 2015, the couple chose to renew their wedding vows at their Somerset home and have developed the pet names ‘Piglet’ and ‘Piglette’ in recent years.

Simon who is regarded a musical genius in local circles continues to charm Edna by playing her favourite song ‘Goodnight, sweetheart’ on the organ.

The 44-year-old regularly toured the country, before type two diabetes and a kidney transplant forced him into retirement.

Also suffering with dyslexia, dyspraxia and Asperger’s syndrome, the organist can listen to a tune once before playing it off the top of his head. 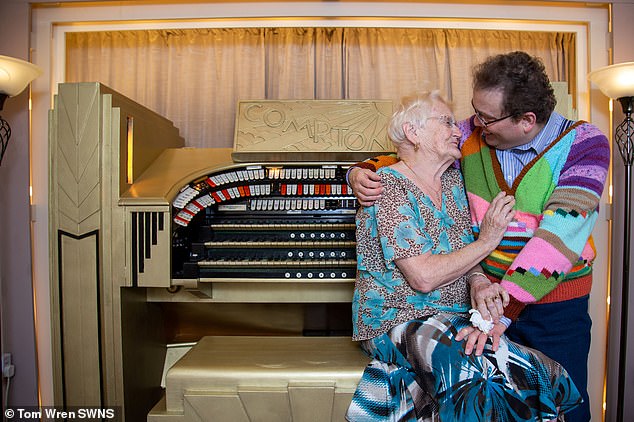 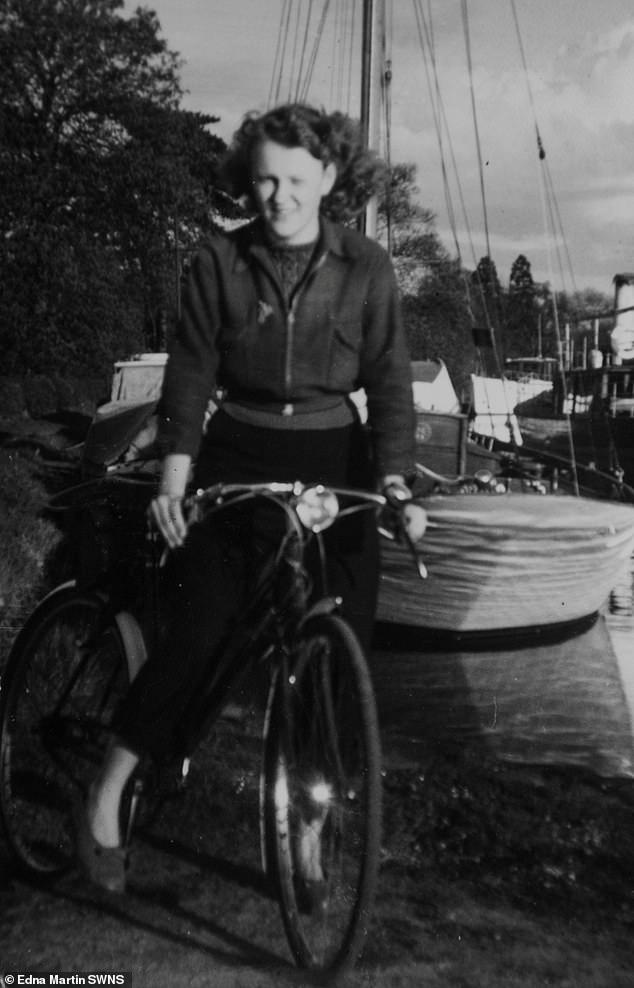 Edna (pictured at age 18) who now has to use an aid for her mobility, revealed she’s conscious of how she feeds Simon who has diabetes in addition to dyslexia, dyspraxia and Asperger’s syndrome 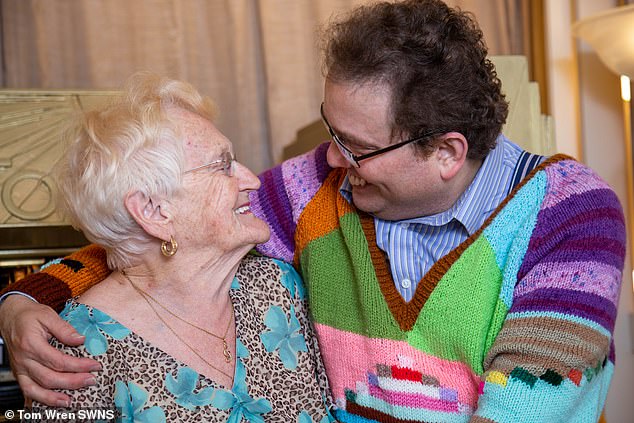 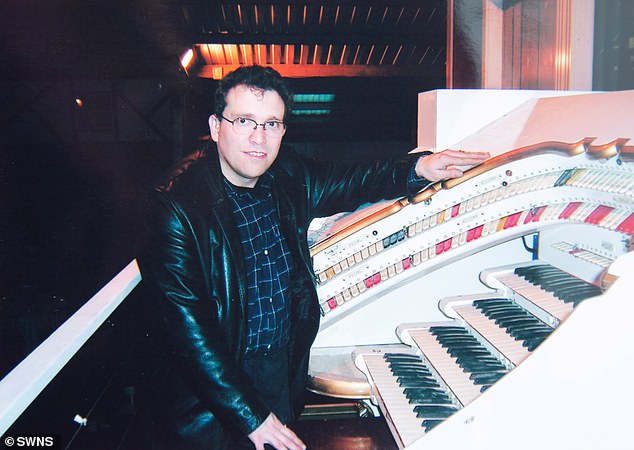 Simon (pictured when he was younger) continues to charm Edna by playing her favourite song  ‘Goodnight, sweetheart’ on the organ

Grandmother-of-four Edna, is a retired engineer who later became secretary for a local theatre organ club.

She continued: ‘We love each other more than before – the love has grown over the years, it’s absolutely wonderful.

‘Simon has had his health problems and I’m getting older now, but do you know anyone who is getting younger?

‘Simon had a kidney transplant four years ago and has been diagnosed with type two diabetes so I have to feed him right.

‘I have a push along walking thing as I struggle with my mobility but as one gets older these things happen.

‘We support and love each other – life couldn’t be better.

‘Our love gets bigger and bigger all the time.’

Simon had never had a girlfriend before he bumped into Edna at a concert, while going through the venue’s back door. 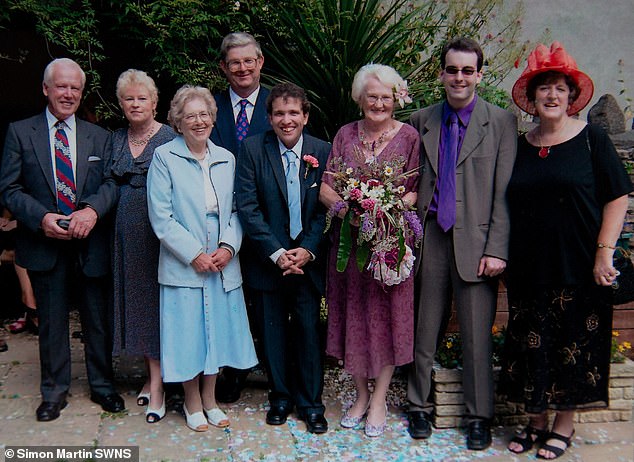 Simon (pictured centre with Edna on their wedding day) recounts being late to a concert at Odeon in Weston, when he met his now wife 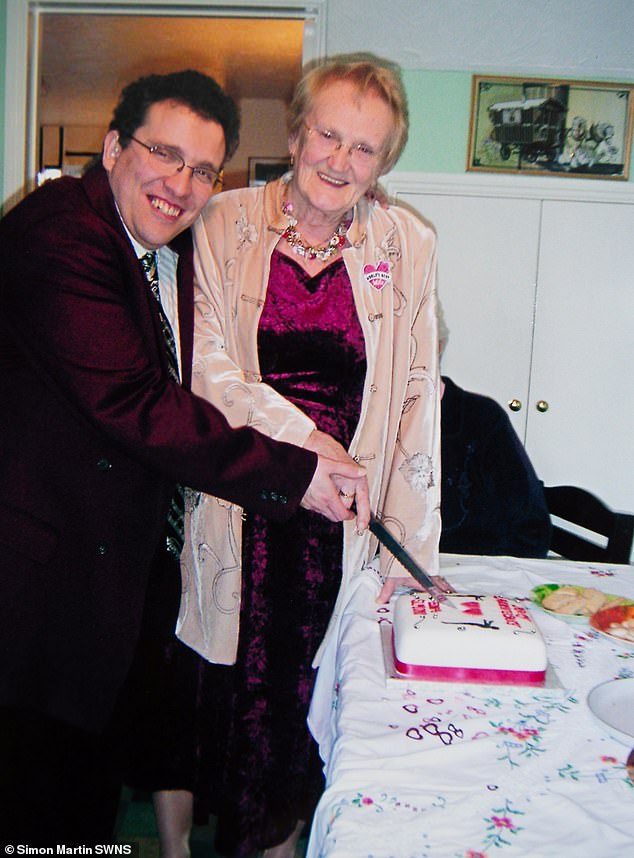 Speaking about his 83-year-old lover, Simon says he experienced love at first sight and remembers thinking to himself ‘She’s a bit of alright’ 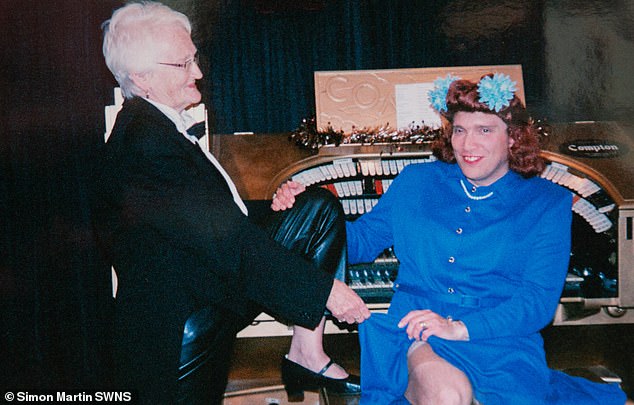 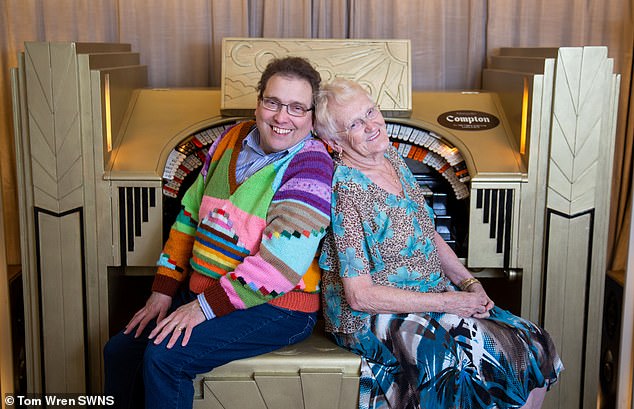 At just over 5ft tall, the 44-year-old is shorter than Edna.

‘It was a concert at the Odeon in Weston which had started by the time I’d arrived so I went around to the emergency exit,’ he said.

‘Ed opened the door and it was love at first sight.

‘She was standing there in a nice, black suit and she opened her arms.

‘We literally fell into each other’s arms.

‘I thought to myself ‘She’s a bit of alright’.’

The pair exchanged letters and phone calls in the following months and would fleetingly see one another at organ concerts around the UK.

They confirmed their romance when they passionately kissed beneath Weston-super-Mare pier after a concert.

Edna, who attended grammar school and worked as a civil engineer until retiring in her 60s, has children from a previous 37-year marriage. 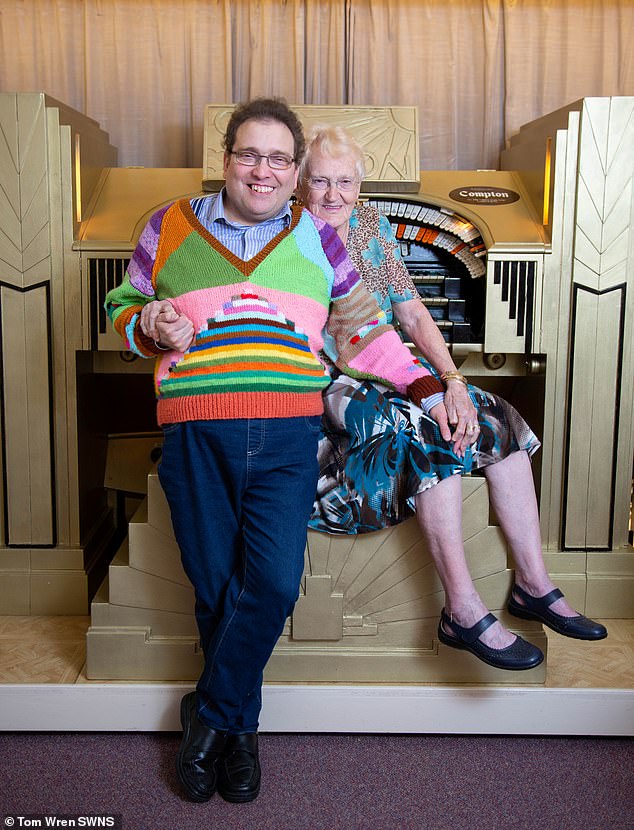 Edna (pictured with Simon) who was previously married for 37 years and has children, says she kept hearing about Simon before they met as they moved around in similar circles 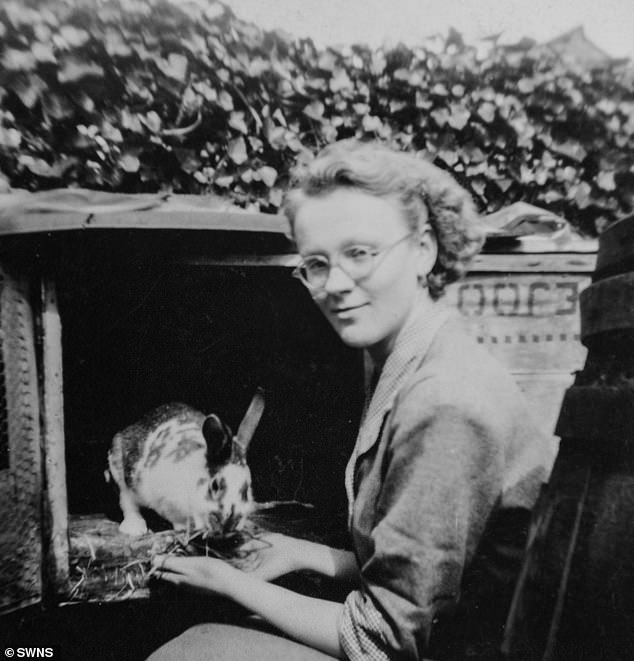 Edna (pictured age 18) recounts kissing Simon on the cheek during their first embrace, after being introduced by a mutual friend 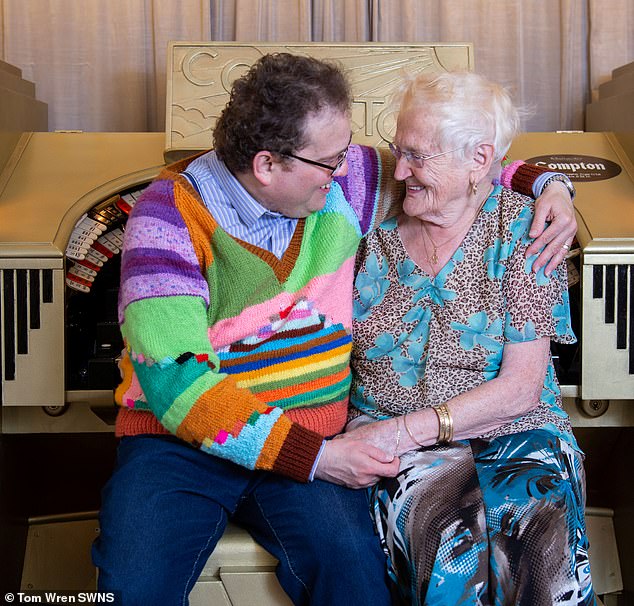 Her children – Lorraine, 59, and Russell, 57 – have always been supportive of her relationship with Simon.

Russell, who shares a love of computers with Simon, even sends him cards on Father’s Day and ‘pulls his leg’ by calling him dad.

Recalling how they met, Edna said: ‘We both share a passion for organ music and moved around in similar circles.

‘I kept hearing about this ‘funny little man’ named Simon Martin and I thought our paths will have to cross at some point.

‘Eventually we were introduced by a friend and after a polite chat I kissed him on the cheek.

‘Then he embraced me and I said to our mutual friend ‘He likes hugs, doesn’t he?’

‘I thought at that moment ‘I don’t want to let him go?’

‘Before we were together he would talk to me for five hours at night over the phone and when he came to stay he would play Goodnight, Sweetheart on the electronic organ every single night. I cried every time.’