The Andrews government has won back some support lost during the pandemic and is in an election-winning position 15 months from polling day.

The findings, in a survey by Resolve Political Monitor conducted exclusively for The Age, show Labor has regained support from voters who previously planned to vote for independent candidates.

Since the last survey taken in May-June, the Andrews government’s primary vote has risen 3 percentage points to 40 per cent. 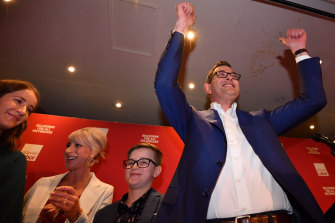 But the repeated lockdowns triggered by the COVID-19 pandemic have taken a toll on the government’s popularity. Labor’s primary vote is still 3 points lower than it was at the 2018 poll.

The opposition has again failed to capitalise on the repeated lockdowns over the past 18 months and remains on the same primary vote of 35 per cent that it recorded at the 2018 election.

Paul Strangio, associate professor of politics at Monash University, said the findings suggested the government would be comfortably returned.

The latest survey found support for the Greens was relatively steady at 10 per cent.

Support for independent candidates dropped from 12 to 9 per cent, with those votes shifting to Labor.

Resolve Strategic director Jim Reed said that while Victorians had swung back behind the Labor state government, they had also shown increasing support for the federal Coalition government, reflecting a general support for incumbency during the pandemic. 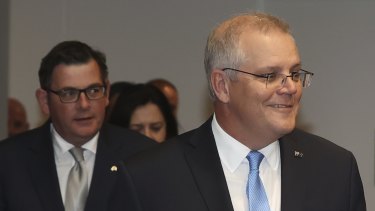 The federal government, led by Scott Morrison, has also gained ground in Victoria as voters returned to incumbents.Credit:Alex Ellinghausen

“Victorians are one of the major swinging groups federally, where they have backed the Morrison government and also moved behind Labor at a state level,” Mr Reed said.

“In times of crisis, people have shown themselves willing to support the incumbent and that has been the story in the pandemic.”

“It’s not that Andrews’ popularity has increased; it is people returning to support the government, not the leader.”

“We saw this in state elections in Tasmania, Queensland and WA, as voters were seemingly resistant to change during the pandemic,” he said.

"The latest results highlight the difficult job the opposition has in trying to sway voters before the next election. The coronavirus restrictions have meant the opposition has not had the usual opportunities to advance their policy agenda. The opposition has also seemingly been unable to resolve its internal divisions following the challenge to Michael O'Brien earlier in the year."

The survey shows that under Mr O’Brien’s leadership, the Coalition remains popular with older men and regional Victorians. Labor is more popular with women, Melburnians and Victorians aged 35 to 54. 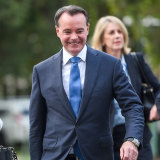 Fifty per cent of voters prefer Mr Andrews as premier, compared with 24 per cent who believe Mr O’Brien would do a better job.

Another 26 per cent are undecided or would like to see someone other than Mr Andrews or Mr O’Brien lead the state.

The survey shows those who support the state government believe it has done its best to keep Victorians safe in the crisis, even when they disagree with some policies.

Voters who intend to support the Coalition next November aren’t necessarily impressed by Mr O’Brien, but say they want to register a vote against Mr Andrews.

The Resolve Political Monitor surveyed 1106 Victorians in July and August. They were asked to rank who they would vote for at a state election if it were held today. The results had a margin of error of 2.5 per cent.

The survey found most Australians want state leaders to stick to the national cabinet agreement to ease restrictions and open up when vaccination targets are met, with 62 per cent backing the plan and 24 per cent saying states and territories should go their own way.

State and territory leaders remain split on whether case numbers need to be significantly suppressed before the country can open up, which under the national cabinet agreement would begin once vaccination rates hit 70 or 80 per cent.

On Saturday, Mr Andrews showed some hesitancy towards the plan, saying: “If you don’t actively suppress this virus then when you do open up, we will have scenes the likes of which none of us have ever experienced in our hospitals.”

In Victoria, 61 per cent of voters want Mr Andrews to stick to the national deal, while 25 per cent believe he should have the freedom to follow his plan.

Mr O’Brien addressed Liberal Party faithful on Wednesday night and revealed he would take a more moderate approach in the next 18 months, insisting the opposition must “play in the middle of the ground”.

"That’s where Victorians are," he said.

He described Victoria as stuck in an “endless loop of lockdowns and restrictions”, in a sign he will campaign against the Andrews government should it waver on the agreement to reopen once vaccination targets are met.

He told Liberal Party members: “Even as Victorians are getting vaccinated in increasing numbers, Mr Andrews is now crab-walking away from agreed national cabinet targets to reopen our state and take back our lives – seeking to snatch away hope from Victorians just as it seems to be within our grasp.”

The next state election is scheduled for November 26 next year.