“This is not my kid. My kid doesn’t act like this,” says Lewis.

The former “Flipping Out” star continued to air the specifics of their ongoing legal proceedings on his SiriusSX Radio Andy show “Jeff Lewis Live” this week, after their most recent trip to court over their custody arrangement ended in a continuance.

According to Lewis, because of the continuance, their current agreement remains in place.

Claiming that he doesn’t know whether his ex is “paying attention at all to Monroe’s behavior” while under Edward’s watch, Lewis went on to say he’s seen recent changes in her behavior while he has custody.

“I have noticed some very noticeable changes in the last 30 days, when we went from two nights a week with Gage to three nights,” he alleged. “She immediately became — and she’s an independent child — very, very clingy to me, needy, constantly asking me where I am, when am I coming back, can I put her down to nap, will I wake her up from nap, I’m not going anywhere, right, can I watch you from the monitor?”

“This is not my kid. My kid doesn’t act like this and she’s been crying a lot,” he continued. “There’s been a lot of tantrums and all of this, this could have something to do with school as well, but I noticed that it was almost immediate once the third day was added. And I’m now considering hiring a child psychologist to come in and maybe talk to her or observe her. Cause I’m concerned.”

TooFab was unable to find a rep for Edward, but in the past has refused to speak publicly about their custody case or any “pending litigation.” 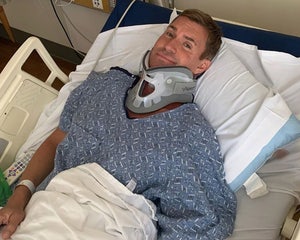 On his radio show, Lewis said he believes their ongoing battle is “ridiculous” and a waste of both time and money.

After they tried to mediate themselves while waiting for a judge, Lewis said offers and counters went back and forth. “They were unreasonable, as usual,” he added.

When it was nearing the end of the day, Lewis said he overheard a bailiff say continuances were taking at least 90 days now, instead of the usual 30 — and, after hearing that, pushed for one so he could keep the current arrangement intact.

Got a story or a tip for us? Email TooFab editors at [email protected].