Home » Lifestyle » JAN MOIR: Women who marry into royals pay a much higher price than men

Each of the wives of Windsor have given up so much and taken on even more… the women who marry into the royals pay a much higher price than the men who do, writes JAN MOIR

You don’t just marry the person you love, you marry into their family, too — whether you like it or not. And in the Royal Family, that bargain is perhaps more pronounced and bittersweet than in most.

This week, we were reminded of the price paid in particular by the wives of Windsor, each of whom has given up so much and taken on even more, just to be with the man they love. Is it worth it?

On Wednesday, Camilla, Kate, Sophie and Meghan formed a line of immaculate, grieving elegance in Westminster Hall, a sad quartet in black stockings and funereal weeds, taking their place in history. After falling in love with their respective princes and dukes, each of them has seen their life change irrevocably, and not always for the better. 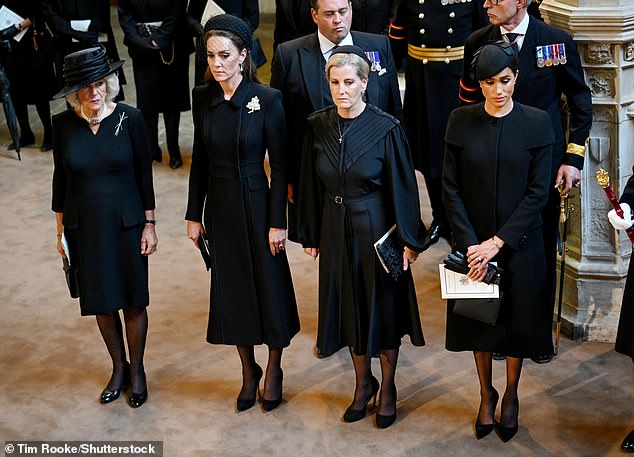 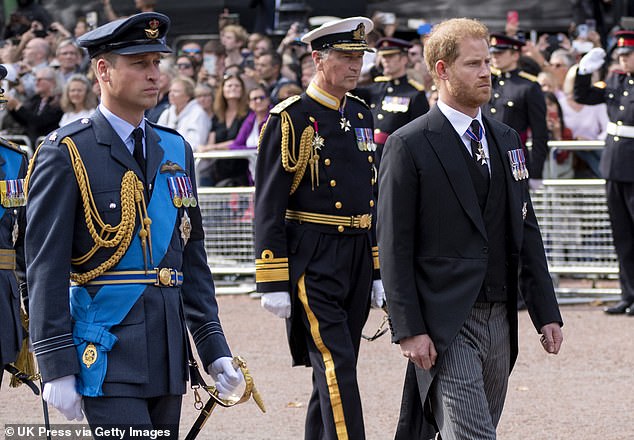 Prince William, Prince of Wales and Prince Harry, Duke of Sussex during the procession for the late monarch on The Mall in London yesterday

Take the Queen Consort. All Camilla ever wanted was Charles. Nothing else. She didn’t hanker for prestige, grand houses, titles and a central ceremonial role in the nation’s affairs, along with the opportunity to share the rank and status of a monarch. In fact, those were the last things she wanted. She just wanted him, even though he was unhappily married to someone else at the time.

To be together they endured years of public vilification and scorn. Now, just as they reach the sunset years of their relationship, they have been catapulted back into the spotlight — and how.

From here on, Camilla is the wife of a king, a woman soon to be crowned herself. Good grief, she must think — this jolly good sport who likes wet dogs, country pursuits, her feet up and crafty ciggies — how did I get here?

You could see her fortitude during the Leaky Pen incident at Hillsborough Castle this week, when her newly elevated husband threw a tantrum over a malfunctioning writing instrument.

She simply took the pen from King Charles, handed it to an aide, got another, then sat down and signed the visitors’ book herself, without even the tiniest of tiny knowing wifely sighs. Testament to her good nature, it also spoke volumes about their relationship.

Then there is Kate, the art history student and sometime accessories buyer who has somehow shaped herself into a future queen with incredible aplomb and discipline; there are often moments when she is more regal than the royals.

The girl from Bucklebury had to leave the carefree ways of her old life behind when she married William, and if she has regrets she keeps them to herself.

Sophie’s transition from PR girl to countess has not been without its glitches. Yet her marriage to Edward is successful, and she became a confidante of the Queen along the way.

Then there is Meghan. For much of her marriage to Harry, the Duchess of Sussex has been either at war with the Windsors or adrift on a river of hurt and a one-way tide of blame. Perhaps now, after taking part in these momentous public occasions, she can grasp just what it takes and what it means to be royal. Also that maybe her in-laws are not so bad after all.

Of course, it is different for the Windsor husbands. Prince Philip was unique, carving a strong and purposeful life for himself from the empty shell of the consort’s role. Princess Anne’s husband fades into the background because, in the nicest possible way, who cares about him? Meanwhile, I note this week that the husbands of Princess Eugenie and Princess Beatrice now wear medals on official royal occasions — surely they were not pinned on to their chests merely for marrying into the York family?

Whatever happens, the men can carry on selling tequila and developing property without pause, because after marrying into The Firm their lives alter little, and even then, only in beneficial ways.

It is different for girls. Their very existence is subsumed into that of their husbands, and they get precious little credit for it.

And if Meghan thinks she has had a rough ride, she should consider the fate of the Duchess of York. It has been 30 years since the toe-sucking incident with her financial adviser. And although some would argue that the Duke of York is guiltier of bigger sins, he is the one who has been forgiven, not her. There is still no place at the Windsor table for Fergie.

Still, following on from the Queen’s sad death, I’m hoping for an enfilade of rapprochements all round. We hear so much about the Windsors being a dysfunctional family: weird, distant, riven with emotional fault lines and fish-knife eccentricities behind the ramparts of their castles. Prince Harry has publicly criticised the way he was raised by Prince Charles — and, by association, how Prince Charles was brought up by the Queen. He has talked of the ‘genetic pain and suffering’ in the Royal Family and stressed that he wants to ‘break the cycle’ for his children.

Yet despite all that, and regardless of the strangeness of the ‘royal zoo’ — Harry, again — this week the Windsors looked like an ordinary, loving family caught in the flytrap of grief.

Strip away the trumpets and pomp and what was left were sons and daughters, brothers and sisters simply doing their best to negotiate the terrible storm of bereavement, just like everyone else. Let’s hope for a happier and united future ahead, for all their sakes.

I know what you’re wondering. What in the name of Feminax has happened to that guy who was appointed menstrual maestro in Scotland? Chaos reigns, of course. In Dundee, Jason Grant has been sacked from his post as Tayside’s PPT (period poverty tsar) following an IB (international backlash).

Many were outraged that a man — any man — was deemed to be in a position to educate women and girls on their menstrual cycles. Dundee & Angus College confirmed the controversial role had been axed following T&A (threats and abuse). But it seems Grant did not go willingly. He is considering suing his former employers on the grounds of sexual discrimination, arguing that his sacking would not have happened to a woman.

My head is spinning — but does he have a case? Grant’s very acceptance of his PPT appointment seemed to suggest that he didn’t think his sex mattered, yet now he has suddenly realised that his sex is desperately important after all.

What a nonsense. You can take diversity too far, you really can.

The road from Brookside to Hollywood, from Liverpool town to Tinseltown, is a long and arduous journey for any actress — but Anna Friel has made it.

There are billboards of her all over Los Angeles this week. For, remarkably, the 46-year-old has lassoed a plum role in Monarch, a new television series from Fox that has just launched in America.

It promises to do for country music what Succession did for newspaper tycoons. Anna stars alongside Susan Sarandon (as her mother) with guest appearances from real country singers Trace Adkins (as her father) and Shania Twain (as herself) in this big-budget, multi-generational drama about ‘America’s first family of music’.

In Monarch, Anna has a flawless Tennessee accent. She sings, too. 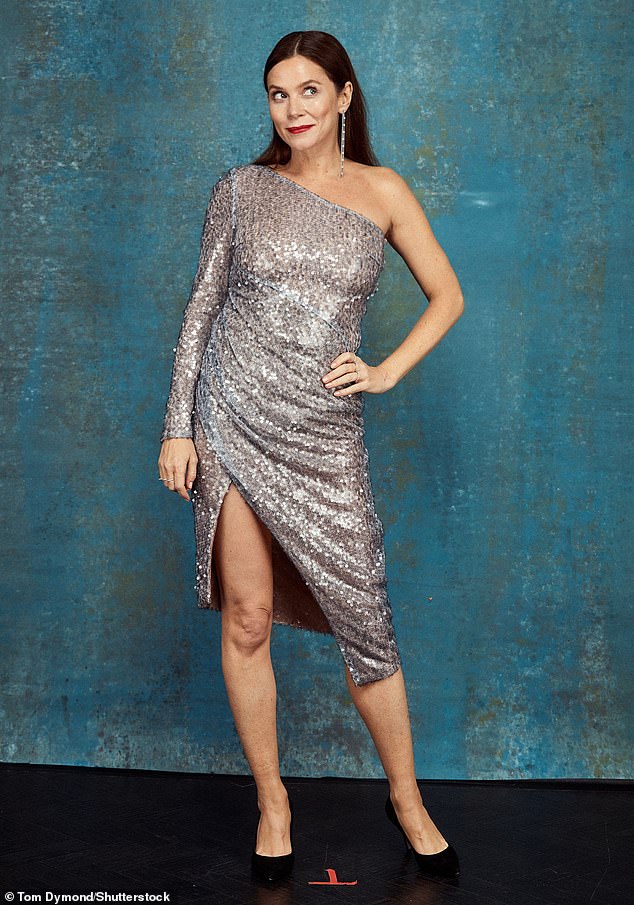 The road from Brookside to Hollywood, from Liverpool town to Tinseltown, is a long and arduous journey for any actress — but Anna Friel has made it

Following protests at the Queen’s coffin procession through Edinburgh this week, a man was arrested and later charged with breach of the peace.

Some have been wringing their hands and arguing that his persecution is in flagrant disregard of freedom of speech laws. That he should have been allowed to protest, even if it was in bad taste. And that a breach of etiquette is not a breach of law. Well, actually, it is in Scotland. Exactly so.

The scope of the charge is wide and can include anything from shouting, abusive or threatening behaviour and causing alarm, to brandishing weapons or violent conduct. ‘Andrew, you are a sick old man,’ the protester shouted as the royal mourners passed by. No, it’s hardly incendiary. Andrew’s probably heard worse. From his own late father, for a start.

But Free the Edinburgh One? I don’t think so. Imagine how you’d feel if some nut started bawling and shouting abuse at family attending your mother’s funeral? People should be able to mourn in peace, without being subjected to the ravings of a monomaniac.

We are either civilised, or we are not. No one, royal or otherwise, should have to put up with behaviour like that.

Bin strikes. Rising fuel costs. The economy in meltdown. Yes, things are awful out there. The suffering cuts deep. The sacrifices are cruel. And I just don’t know how much more I can take. I’m talking about the shortage of Dijon mustard, of course. There isn’t a jar to be had out there, from my local supermarket to eternity. How much more agony can a woman take? I’m not hamming it up. I need my Dijon now. 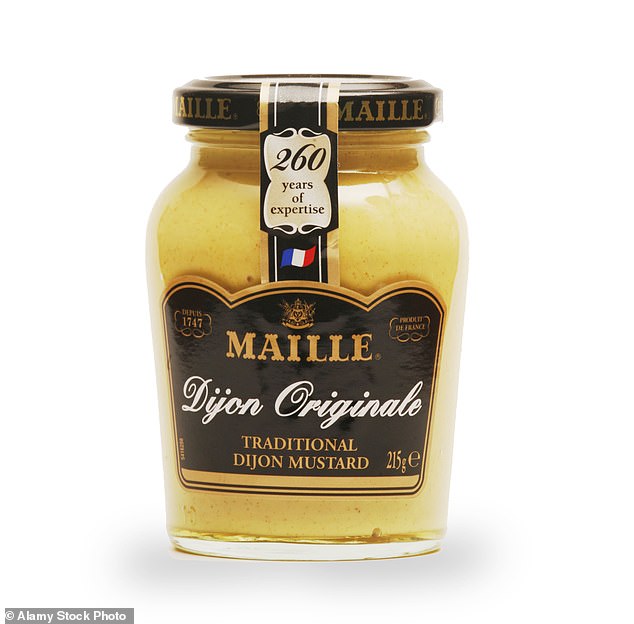 I just don’t know how much more I can take. I’m talking about the shortage of Dijon mustard, of course

Is it really only a week since the Queen died? It seems like a lifetime ago. So much has happened over the past seven days while the merciless accession of King Charles III grinds onwards, as history dictates it must. There’s been so much pomp and ceremony, so much sadness, so much to be proud of. Yet one of the most touching aspects has been the quiet dignity of the ordinary people who queue for hours to say their own farewell to the Queen, as she lies in state at Westminster Hall. Finally, they get their moment. The quiet nod of the head, the small bow, the determination to say goodbye in a private moment of public respect. It is so moving. And it says more about the Queen than a thousand obituaries ever could.