‘But it was so small!’ Glimpses of Prince Harry and Meghan Markle’s tiny Nottingham Cottage love nest with its ‘cosy but accessible décor’ spotted in Netflix series – including £38 toaster, Union Jack placemats, and magnolia walls

The first royal home shared by Harry and Meghan after the couple announced their engagement in 2016 was Nottingham Cottage – a residence described by the Duchess as ‘so small’.

Despite being set within the grounds of Kensington Palace in central London, the modest two-bedroom home has a surprisingly rustic, countryside feel to it.

Now the Duke, 38, and Duchess, 41, of Sussex have shown off more of the house, which was the first marital home of the Prince and Princess of Wales, in their Netflix docuseries.

The final three episodes of the series, which has documented the couple’s life together, showed a glimpse inside their first UK residence, which was home to Harry for several years before he met his wife, and which they shared before moving into the more luxurious Frogmore Cottage after their nuptials. 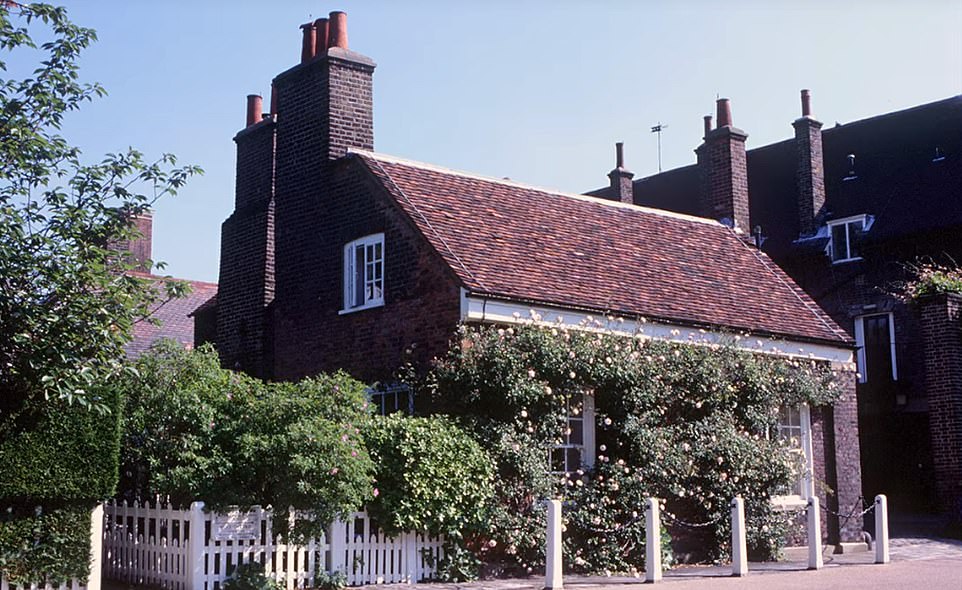 Nottingham Cottage (pictured) in the grounds of Kensington Palace, is a modest two-bedroom cottage. Prince Harry and Meghan lived there together after their engagement. It was also the first marital home of Prince William and Kate

In the Netflix docuseries, Meghan points out that the living space was far from expansive, saying: ‘Kensington Palace sounds very regal, of course it does, it says “palace” in the name. But Nottingham Cottage was so small.’

Describing the home, Meghan said: ‘People thought we lived in a palace and we did. Well, a cottage in a palace.’

Harry said: ‘The whole thing is on a slight lean, [with] really low ceilings. So I don’t know who was there before but they must have been very short.’

The cottage’s decor is informal, with images from the programme showing unexpectedly down-to-earth touches, like the couple’s £38 Breville toaster in the kitchen. Meanwhile, a glimpse into the living room shows Harry relaxing on the sofa with one of the couple’s beloved pooches.

According to interiors expert Benji Lewis, the room would ‘have to be viewed as comfy, cosy but accessible décor’, he noted that it ‘couldn’t be further removed from what we saw of their California place’. 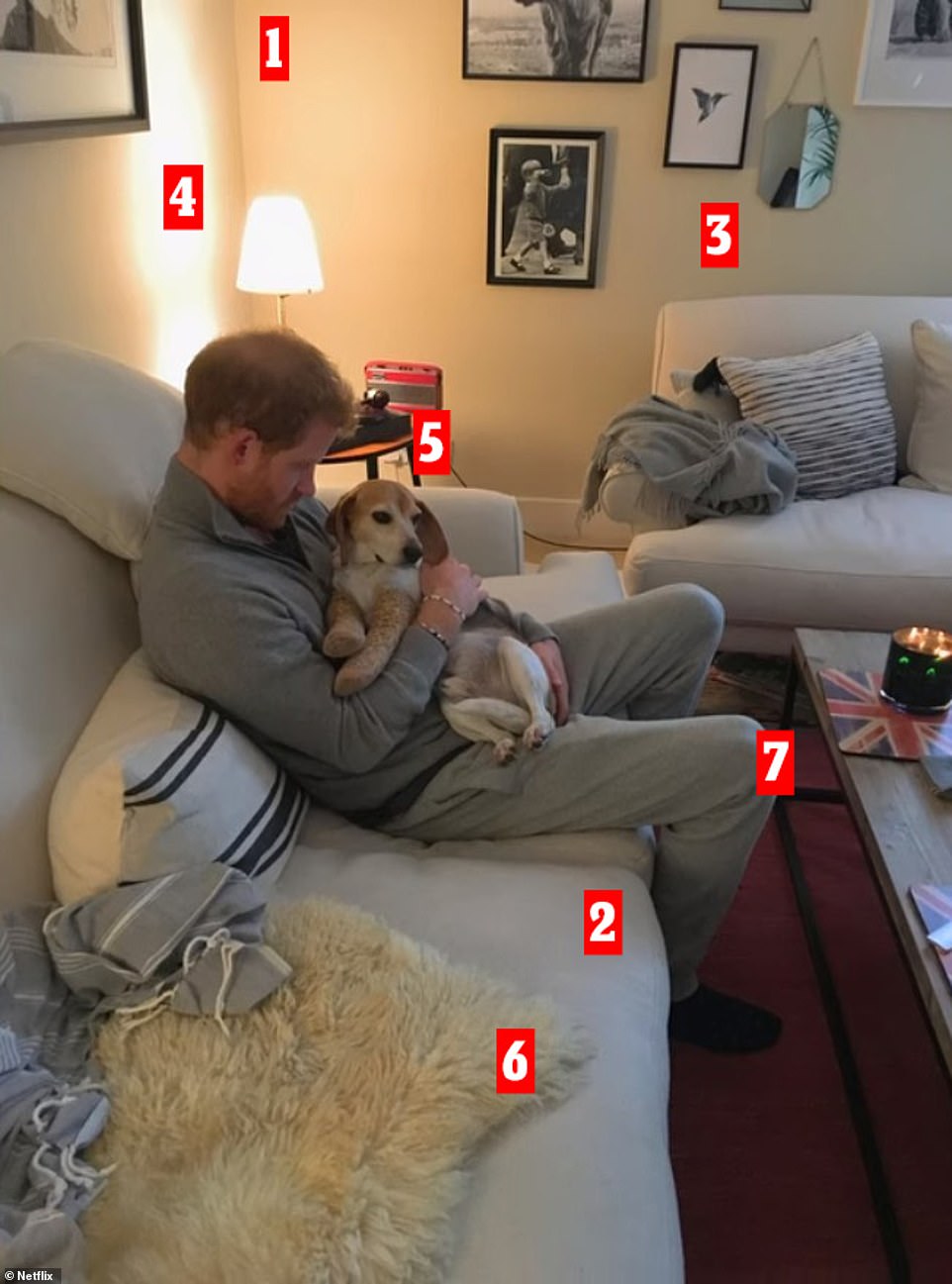 Interiors expert Benji Lewis described the living room in Nottingham Cottage as ‘comfy, cosy but accessible’ (pictured: Prince Harry in the cottage with one of the couple’s dogs)

One of the subtle design choices in the cottage’s living room is the soft cream colour on the walls, which lend the space a neutral look.

Benji told FEMAIL: ‘There’s nothing showy or fancy going on here, the wall colour might even be something as uncomplicated as magnolia.’

Looking at the layout of the room, he observed that the sofa arrangement is good, noting that ‘the corner configuration allows for nice interaction between whoever’s sitting down, while the large coffee table means nobody needs to stretch to put their cup of tea down’.

Regarding the decor, he said pattern has been kept to a minimum, with just a couple of blue and white striped scatter cushions on the neutral sofas adding a splash of colour.

He added: ‘The sofa style is trad and not too bulky, aside form the few scatter cushions, the fixed back nature of the sofas means that whilst they provide comfort they’re not overloaded with multiple cushions to re-plump.

Another design feature of the room is the wall decoration. One of the room’s walls appears to be covered in black and white photos.

Benji also pointed out another decor choice. He said: ‘ I like the way they’ve included a mid century mirror on what looks like a gallery wall of art of what look possibly like black and white family photos.’

In terms of the lighting in room, he noted that  lamplight is ‘always good in a reception room’, but suggested that ‘this particular light whilst providing a nice feel to the space, could barely make less of a statement’.

He said: ‘Nevertheless they’ve worked out that they’d like a lamp in that corner, the power point being well positioned for the task.’

When it came to the lamp’s cable, he noted: ‘Perhaps the trailing cable going behind the sofa suggests that not all things were considered however when it came to planning the room.’

One piece of furniture in the room could hint at the couple opting for a sustainable choice – the side table, which Benji suggested may have been reused.

He said: ‘The side table is undersized for the corner it’s in, good for the scale of the lamp but I wonder if it’s actually an upcycled piece, brought into the room as something with which to make do.’

On top of the sofa, a sheep skin rug can clearly be seen. According to Benji, this could be a nod to the couple’s love of their pooches.

He told FEMAIL: ‘We know that they love dogs so it’s no wonder there’s been an allowance for the pooches on the sofa – I should think that’s the point of the sheepskin rug, somewhere cosy for the doggies to hunker down.

‘We can’t see what the floor finish is, timber boards I should imagine – the rug provides a nice bit of warm colour, and it’s clearly been sized to provide a cosy feel underfoot when you get up off the sofas.’

One of the quirkier touches in the room can be seen on top of the coffee table – a Union Jack placemat.

According to Benji: ‘The patriotic touch with the Union Jack flags is unsurprising, and the lit candle on the coffee table implies an evening for hunkering down in front of the telly.’ 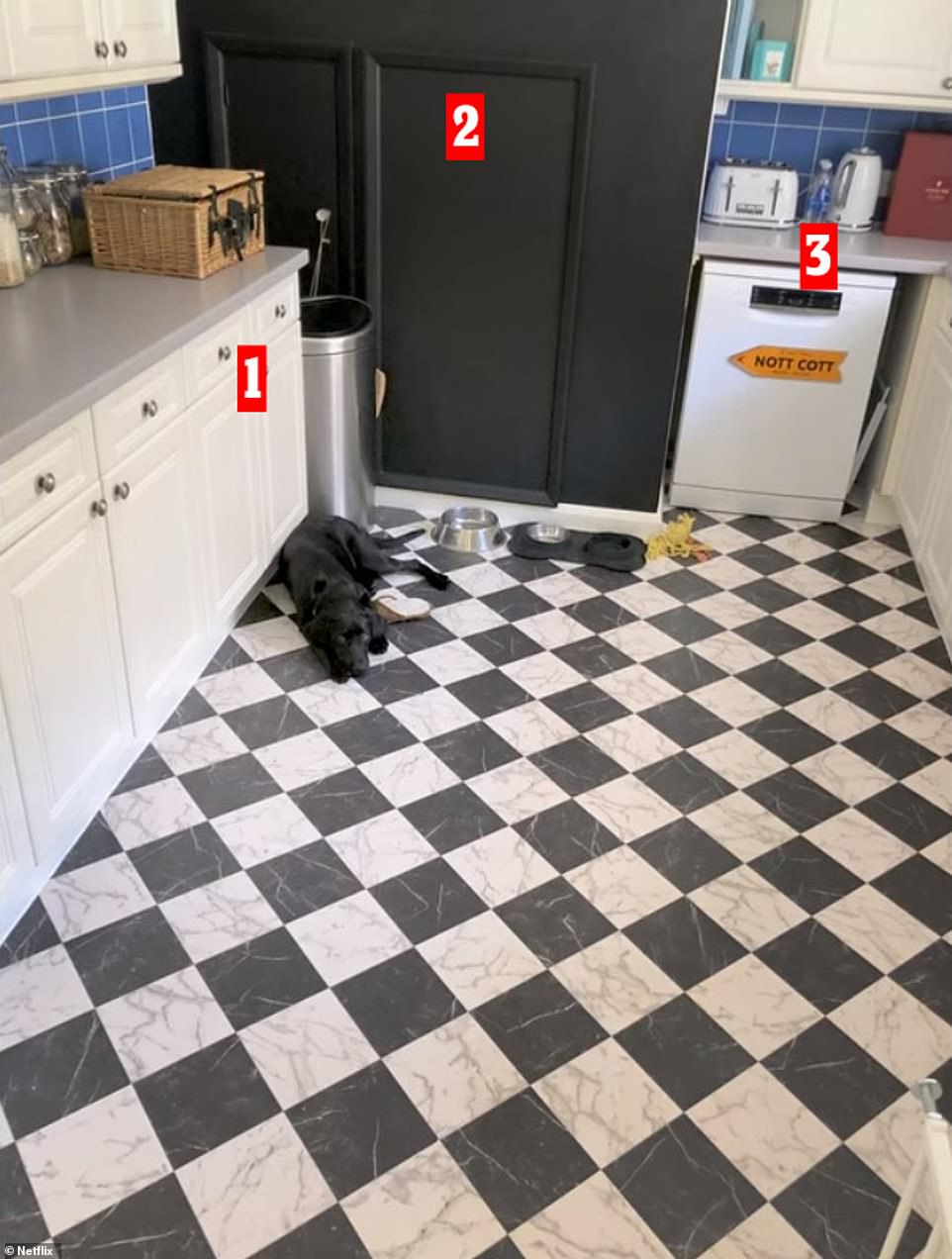 Meanwhile the kitchen in the cottage, which boasts a simple colour scheme of white, charcoal, and royal blue, was described as ‘unpretentious’

Meanwhile, interiors expert Benji described the couple’s kitchen as ‘unpretentious’, suggesting that it may have been inherited from a previous owner.

He noted that the room’s colour scheme is simple, ‘kept as it is to off white, charcoal and Royal blue’.

Benji added: ‘There’s no suggestion of a table and chairs in the kitchen, I wonder if this is more of a pantry – somewhere to feed the dogs rather than cook the Sunday roast.’

He noted the traditional elements of the room, particularly the Shaker style door fronts.

‘[They] are absolutely the trad way of doing things, and finished with chrome or nickel knobs these are very safe choices that have been made,’ he said.

Another classic feature is the flooring, about which he said: ‘Black and white checkered floors are good and I like the way the checkerboard pattern runs on the diagonal.’

However, the room isn’t totally devoid of statements, according to Benji, who highlighted the statement black panelling in the room, which makes the area stand out.

He said: ‘The area of panelling painted black is a good strong statement.’

Among the utensils on the work surfaces are the couple’s surprisingly unflashy white kettle and toaster.

The items, which co-ordinate, appear to be from Breville, with similar models available costing around £71 for the set.

Benji described the room as ‘simple and functional and not much more than that’.

He explained: ‘This is a kitchen that you could absolutely envisage coming into and finding what you want with ease when it comes to a mug of tea and a slice of toast, more than that though it’s impossible to tell.’

According to the interiors expert: ‘Clearly even though they don’t mind having kitchen accoutrements out on the sides, everything looks in its rightful place.’

The final days at Frogmore: Meghan and Harry say packing up Windsor cottage before move to California was ‘bittersweet’ and ‘gave us a chance to look back at our whole love story’