Home » Lifestyle » In the Studio With Peter Uka, the Artist Painting From Memory 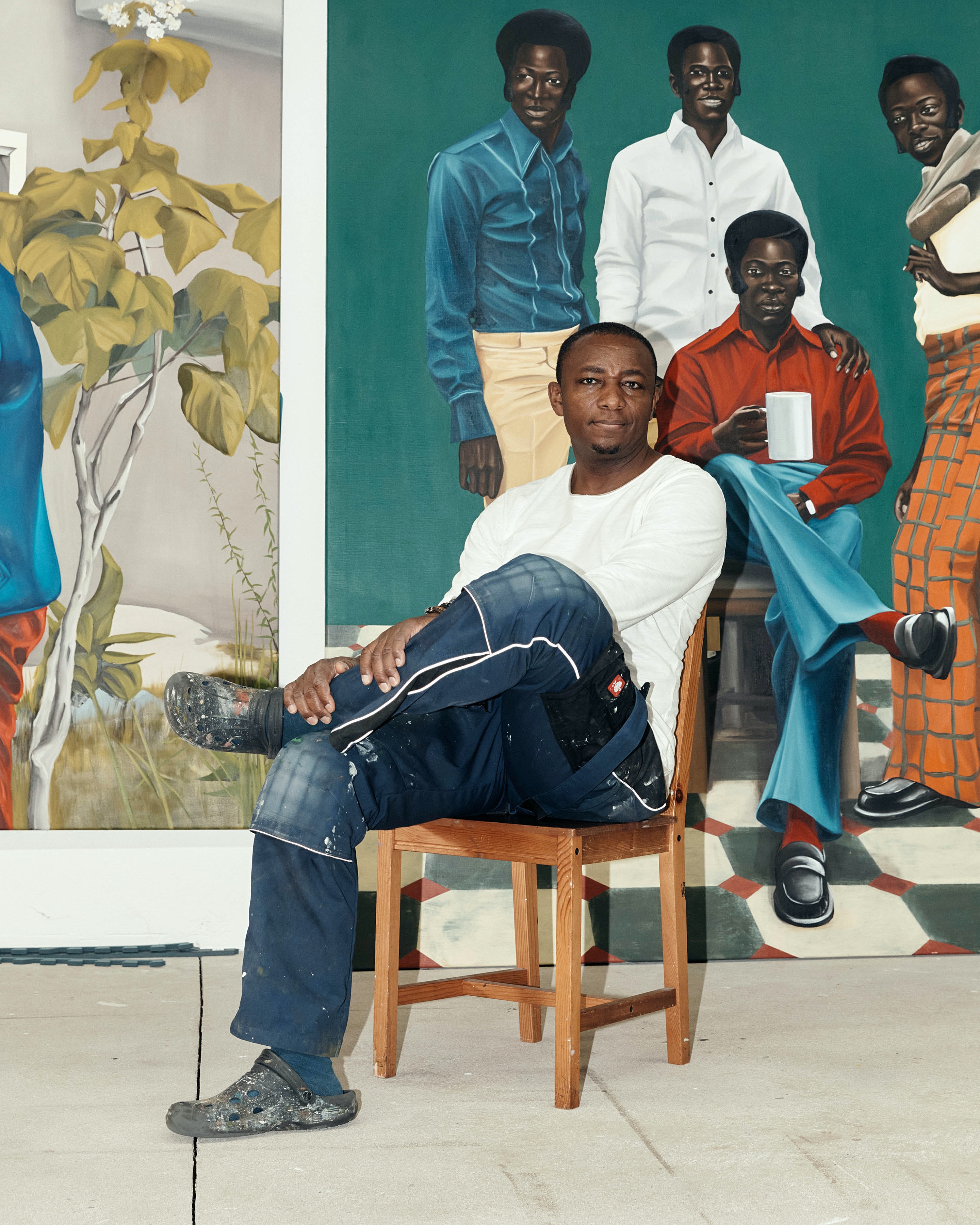 The Nigerian painter Peter Uka remembers his native Benue as a teeming jungle, but now estimates that ninety percent of that original foliage has been laid to waste. “Green used to color Benue, now it is all dusty and brown,” Uka laments. “Green is a very powerful color to use, to be honest, as a surface and as a background. I wanted to reflect on that time and the loss I feel now.” The 46-year-old artist invokes Benue’s former flora with his latest exhibition, “Longing,” currently on view at Mariane Ibrahim Gallery in Chicago.

Transforming childhood snippets into heroic portraits, Uka is part of a starry generation of African painters, like Portia Zvavahera, who currently has a show at David Zwirner in New York, and Amoako Boafo, who is also represented by Mariane Ibrahim, pulling from the cache of consciousness—dreams, impressions, remembrance—to create arresting images. Ibrahim’s program has been essential in introducing practices like Boafo’s and Uka’s to American audiences.

When I speak to Uka, he is in his studio in Cologne, where he’s lived on and off since 2007. Before that, he studied classical techniques at the Yaba College of Technology in Lagos; he won a class competition to showcase his work in Düsseldorf, and during his visit met the Danish artist Tal R, who influenced Uka to stay in Germany for his studies, and to give the strict realistic style he was being taught back home a rest. “Tal always talks about the little things—it could be one dot on the surface that makes sense out of everything,” Uka says. “It is always about the whole sum.”

Peter Uka in his studio in Cologne, Germany. Photograph by Will Jivcoff for W Magazine.

Nowadays, Uka concentrates on the big picture. This means he may not bother drawing hands or feet precisely, but will make a certain fabric or item of clothing utterly life-like. The realism of the images fades in and out, much like memories do. “People are always asking me if I use photographs to make my paintings or if I’d consider painting white people. Neither of those things has anything to do with what is going on in my work at the moment,” Uka says. “I’m pulling from this archive in my head. The little details that stand out to me: that one shoe, that one gesture. I can build an entire story from one fragment if I can see it clearly.”

Uka finds this process of making fragments whole therapeutic. He confides that the only person he’s depicted multiple times is his mother; the other characters are amalgams—very fashion-conscious, well-heeled ones. Uka’s figures often reference Nigeria’s history of trendsetting style on the African continent and beyond. The specificity of the clothing is something that draws the viewer into the painter’s stories—fashion is a vehicle Uka uses to make his recollections real. His favorite period is the 1970s, when he claims clothing took on a kind of timeless appeal. I ask if he can imagine painting the present day some time, and he pauses. “I’m not there yet, but there is an image in the new show that depicts a friend of mine, Marsha.”

Peter Uka in his studio in Cologne, Germany. Photograph by Will Jivcoff for W Magazine.

Marsha is, in fact, the headlining image for his presentation at Mariane Ibrahim Gallery. Depicted in Uka’s idiosyncratic style, the young Nigerian-German woman sits on the floor of a library Uka has envisioned for her. Marsha’s classical posture is what prompted Uka to snap a shot on his iPhone when she was visiting him one afternoon. “Marsha is of mixed descent and she’s at that point in her life where she’s learning more about her Black roots, as well as her German roots. She is not torn in between. All she’s doing is saying, ‘I’d like to know more.’ And I’d like to know more about this too,” Uka says. “I’m in the middle of learning again, through her eyes.”

Uka’s work can be seen as a way of preserving experience. The urgency in the work is the artist rushing to make his way through the archive in his head before it fades. I ask if this means that in the future he might turn to his early days in Cologne, which have yet to appear in his storyline. He nods and shares that he also feels a desire to see the paintings evolve and get “looser.” This is both a formula to continue to grow and a way to protect the existing work from the flattening lens of identity politics. The pictures that he creates certainly speak to Black experience, but they are also universal. They capture romance, the flush of young friendship and those moments of self-reflection we have all experienced. “As I’m getting older, it is harder and harder to recall certain moments,” Uka says. “With the paintings, I get a chance to hold onto them.”