Home » Lifestyle » I hate doing office Secret Santa. How do I get out of it?

Each week, Dr Kirstin Ferguson tackles questions on the workplace, career and leadership in her advice column “Got a Minute?” This week, feeling like the Grinch, dealing with an extra workload, and rolling your eyes at an office suck-up.

Every year my workmates run a Secret Santa and every year and I resent being forced to take part. I find it hard enough to afford to buy presents for family and friends and don’t want to be forced to spend the $40 limit on a colleague. I definitely don’t want the gift I get in return, which always seems to be some plastic crap from the local bargain-basement shop. There is so much peer pressure to smile through it all, and I don’t feel I can say no. What do you suggest?

So, here’s the thing. You are basically spending the money (and whacking a smile on your face while you do it) to remain a valued member of positive workplace culture. If you were to be the only person in your team to say you were not taking part, that is going to cost you a lot more than $40 in the end. The path of least resistance is just to get on with it, knowing full well this only happens once a year, and you can forget about it again until next December. 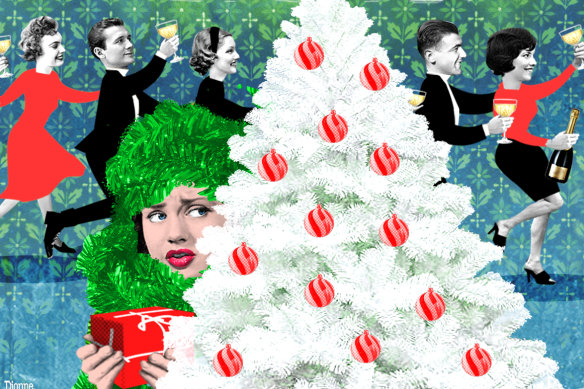 I don’t want to do Secret Santa at my office party.Credit:Dionne Gain

Alternatively, maybe you could come up with an idea that you think could replace it? If Secret Santa isn’t working for you, is there some other way you could celebrate the end of the year with your team which doesn’t involve stumping up cash? Perhaps volunteering at a local charity? You may find others in your team don’t like Secret Santa either and so will be thrilled you had the courage to suggest something new. At a minimum, if the $40 limit is too high, suggest reducing the limit to something more affordable (which I reckon you will find your colleagues will appreciate too).

And if none of that works for you, maybe it is not the Secret Santa that is bothering you as much as how you feel about working with your team?

I’m currently a supervisor with two direct reports. As part of an internal restructure, my supervisor is adding another direct report to my team and passing down half the workload from their role to me. Basically, I am getting an additional report to supervise, and more complex work, with no remuneration change. Do I have grounds to refuse to do the extra work or to supervise the extra role?

Any time there is an internal restructure there are changes that arise where, when it all plays out, do not work as planned. If your supervisor is asking you to significantly adjust your workload, I think it is worth sitting down with them and asking them which parts of your current workload should give way to this extra work. Refusing to do the extra work is not the way to go. Instead, go into the meeting with genuine curiosity and to seek a way to make this work. Also have a clear plan of what you think can work and list the tasks you expect will need to be re-allocated.

Ultimately, if you can show there simply are not enough hours in the day to do all the work you were doing pre-restructure and now the additional work you have been given post-restructure, it is more than reasonable to seek a solution.

One of the members of my team is a real suck-up. Whenever our boss walks in the rest of us just roll their eyes as this person starts winning them over. Our boss doesn’t seem to notice that the suck-up is actually hopeless at their job. Should we tell our boss what is actually going on?

There are some people in life who are very clever at managing up, and it sounds like your colleague is one. They know all the correct things to say to their boss and don’t seem to care about managing relationships with their peers or, often, even those they lead themselves. The thing is, it generally becomes obvious, and your colleague is likely to learn the hard way. The truth always comes out and even if they do manage to wangle an internal promotion, when they get it they will probably find they do not succeed because they haven’t built trusted relationships which will matter most — now. If they are ever asked to do a 360-review, it will also become obvious when the scores of their peers and direct reports are much lower than those of their boss.

Unless your boss is completely blind, you will probably discover they know what is going on. Hopefully, your boss will coach them that to succeed – whether in life, at work, wherever – they need to earn the respect of everyone they work with, not just the person more senior than then in the organisational chart. Play the long game and focus on what you are doing. It will all work itself out in the end.

Send your questions about work, careers and leadership to [email protected] Your name and any identifying information will not be used. Letters may be edited.