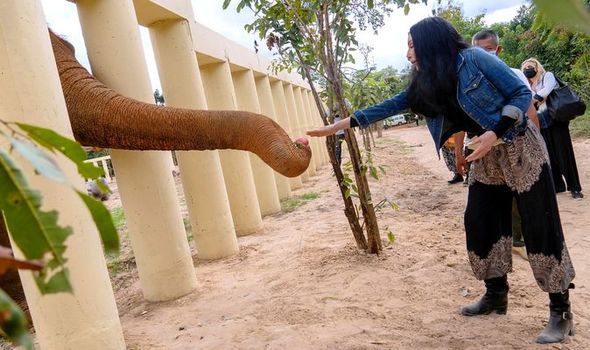 But this is no stage entrance or throw-back gig – it was the moment that music icon, Cher, arrived at a run-down zoo in Pakistan, her eyes focused not on the starstruck crowd but on the reason for her visit: Kaavan, the world’s loneliest elephant. “You have to walk up the long road into the zoo and I could see him from the distance,” said Cher, recalling that momentous time.

“The first thing I noticed was, ‘What he is doing in this hellhole, which is as big as my fingernail, and my god he is so brown and beautiful – rusty. And then – he is so big!’”

After a 24-hour journey from her Los Angeles home, the 74-year-old music legend had arrived in Islamabad to help rehome the Asian bull elephant she had spent five years campaigning to free.

What made it even more remarkable was that her international rescue took place last November during the global pandemic.

The mission would involve Kaavan being transported 2,600 miles over 11 hours to his new home, a wildlife sanctuary in Cambodia.

The poignant project, which viewers can follow in the documentary, Cher and the Loneliest Elephant, on the Smithsonian Channel, necessitated a risky and potentially fatal seven-hour plane journey. But there was no alternative because Kaavan was in a pitiful state.

The 36-year-old elephant had languished in squalid conditions at Marghazar Zoo in the Pakistani capital for 35 years – shockingly, the vast majority of them shackled to a 10-metre chain in a small shed.

Isolated since the death of his mate, Saheli, in 2012, he was neglected, obese and depressed. He was known as the “dancing elephant” to visitors ignorant of his severe mental distress. Sometimes his owners forced him to drink whisky and vodka.

“I wanted to free him, I knew we had to get him out,” said Cher. She was alerted to his plight in 2015 through a “Free Kaavan” online campaign that went viral.

It was started by Dr Samar Khan, then a trainee vet from America who, while visiting relatives, went to the zoo and saw Kaavan’s disturbing conditions.

“He was this solitary elephant in this bear shed and that weaving behaviour where he was just moving by himself back and forth – that really struck me,” she said.

Asian elephants are social, intelligent mammals who live in small family herds in the wild and thrive on the strong bonds they establish.

“They’re just like we are,” said Cher. “We’re very much the same. They’re so family orientated and emotional.”

Suffering as he was, Kaavan unsurprisingly lashed out in distress and killed two of the zoo’s staff. But his life was also in danger. His partner Saheli died after her heavy chains caused gangrene.

Samar knew she had to act. In September 2015, she launched a Free Kaavan Facebook page. It was widely shared and the hashtag #freekaavan was circulated on Twitter.

Cher, a longtime animal rights campaigner, was bombarded with messages from her millions of fans urging her to do something. But despite her global platform, the If I Could Turn Back Time singer felt helpless. “I thought ‘I cannot save an elephant in Pakistan because I have no street cred’,” she said. “How am I going to do this?”

But the “horrible” pictures mobilised her into action. “I was p***** off too, I was really angry,” she said. And as it turned out, she realised she could help Kaavan through a man called Mark Cowne, Bob Geldof’s manager, with whom she had bonded over elephants during a car ride several years earlier.

Cher called Mark and he agreed to help. He flew immediately to Pakistan and persuaded zoo bosses to remove Kaavan’s shackles, give him some toys, fill in his dried-up pool, and put a top on his shed.

But it was just a sticking plaster solution, so Mark and Cher joined forces to launch their charity, Free the Wild, in 2018 to release captive animals, including Kaavan. Cher started a relentless Twitter campaign, appealing directly to Pakistan’s federal minister Fawad Chaudhry: “Dear Minister, I am not too proud 2 beg you on my knees to let Kaavan Go 2 Freedom…”

But nothing changed. “That didn’t seem to help,” she complained in the film.

Nor did the song, Walls, which she recorded to highlight Kaavan’s plight. All hope seemed lost until early in 2020 when Pakistani lawyer Owais Awan won a landmark court case arguing Kaavan’s rights as an animal must be recognised and the elephant moved to a better facility.

Then a high court ruling decreed in May that Kaavan be freed and the entire zoo closed. The caveat was that all the animals had to be moved in 30 days – later delayed to November 29 because of the pandemic.

“We said, ‘Do we really want to go to Islamabad during Covid? That’s kind of not a good idea, we’re going to die,’” admitted Cher. “We just decided that ‘Oh that’s not as important as saving this elephant.’”

The good news was that a new home awaited Kaavan at Cambodia Wildlife Sanctuary. A lush jungle of 30,000 acres, the protected sanctuary is home to free-roaming elephants, big cats and primates.

The bad news? The long journey posed a logistical nightmare and a real risk of death to everyone on the cargo plane with an angry elephant on board.

He had met Kaavan before and remembered his hatred of people. “He had the worst experience for an animal,” he said. “He didn’t see us as humans but as monsters.”

Amir placed the four-tonne elephant on a diet and trained him to stand calmly inside his transport crate, singing Frank Sinatra’s My Way to him.

The first crate built by local engineers was poorly made and Kaavan tore off its open doors. An elephant-proof version was ordered as nothing could be left to chance, with human and animal lives at stake.

Then, just one week before the flight, Kaavan entered musth, a period when male elephants’ testosterone surges to 60 times its normal levels.

It makes them extremely dangerous as Mark learned to his cost when Kaavan suddenly unfurled his trunk and knocked him and Amir to the ground after they got too close. They escaped unharmed but shaken.

It was then that Cher arrived. “Everyone was saying, ‘We didn’t expect you to come. Why are you here?’” she said in the film. “And I said, ‘Because I said I was coming and now I’m here. I’m here to get Kaavan’.”

True to her word, the megastar had not given up on him and fed him watermelon and serenaded him with her own distinctive rendition of My Way.

“It was like I already knew him but I didn’t know what it was going to be like,” she said. “I didn’t realise he was going to have such a cute personality. I thought he would be really angry.”

With the deadline looming, the team had to move fast. Cher flew ahead to Cambodia, Kaavan was sedated and moved into his new crate in preparation for his long trip.

He was given just enough tranquiliser to stay awake but remain calm and drowsy, and to everyone’s relief, he behaved impeccably during the flight.

Cher was there to greet him at Siem Reap Airport. “It was almost real,” she says. “We had a bit to go still but we were there in Cambodia and the people were so excited to see him.”

With her was Canadian-born Darrick Thomson who had secured Kaavan’s forever home with his wife, renowned Thai elephant activist Sangduen “Lek” Chailert. He sat beside Kaaven’s crate on the flatbed truck for the four-hour drive so he could monitor him.

The fleet arrived at nighttime and an exhausted Kavaan’s ankle straps were removed and he was released into a temporary one-acre enclosure, watched by Cher.

Kaavan settled in fast, exploring his surroundings and the company of three nearby curious females the next day. After 35 years of misery, he was finally happy.

Samar, the woman who made it all possible, hopes people will be moved by his story.

“I hope it inspires people to act out on behalf of animal welfare because I feel that Kaavan’s journey really shows the power of people,” she said. “It’s amazing that Cher really adopted Kaavan as her own.”

Today, Kaavan continues to flourish and enjoys mud baths and mealtimes with his ‘girlfriends’. Soon he will be ready to enter his jungle paradise where he can roam freely.

“This is like a fairytale ending where they kiss at the end,” Cher said.

After watching the completed film ahead of its broadcast, Cher told her 3.9 million Twitter followers: “You’ll cry”.

And it is true – it’s impossible not to.