Home » Lifestyle » Here’s where to catch some cutting-edge dance

The eighth year of New Breed underlines its importance as a chance for emerging choreographers to test their ideas on the skilful performers of the Sydney Dance Company.

The four dance creators, who each introduce their work on a video ahead of its showing, have thought deeply about the varied and challenging themes they want to develop in movement. 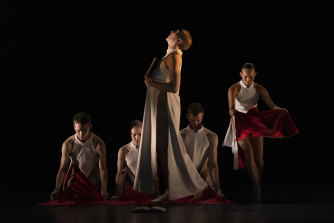 The choreography and storytelling in Given Unto Thee are finely balanced to make an effective and moving work.Credit:Pedro Greig

A couple remain in the embryo stage – more words than action – but may be more accessible to others. Two come up strongly.

These words make a leap from South Africa to Australia. We are introduced to solemn missionaries with their bibles and brilliantly designed liturgical costumes by Aleisa Jelbart. We see the same dancers evolve as Indigenous converts who agonise over their lost land and culture. Choreography and storytelling are finely balanced to make an effective and moving work.

Italian-born SDC member Jacopo Grabar has fun with Stereotipo, as do the dancers. His stereotypes are at first expressed as exaggerated body shapes – an ultra-muscular man, a super-sexy girl – and then as characters through a poetic solo, a competitive duet and a tricky trio of enmeshed arms and legs. The moves are interesting, athletic and often original, enhanced by the amusing contrast of operatic arias to accompany them, no doubt another nudge at stereotypes.

Rhiannon Newton’s The Gift of a Warning is concerned with dance as a force and the possibility of it acting as a warning – if I understand her words correctly. Yet it was hard to see this theory in the movement, which began with strong dramatic interest but faded despite its neat construction and well-prepared performance.

Lilian Steiner has thoughts tumbling out of her spoken introduction and the piece itself, Springtime Again. Performed in total darkness, all we can see are large moving spotlit blobs, carried and propelled by hard-working dancers concealed in black. There was no coherent design that I could work out, just the difference of some blobs looking like giant slices of pear and others chunks of cauliflower – with far too long to contemplate them.