To say the NBA Finals are a big deal amongst my friends is kind of an understatement. All of us squeeze into someone’s living room — or line the barstools at a nearby pub — to drink beer, yell at the screen, and most importantly, eat our feelings. And while I’m always down to tag along, I usually get most excited about the selection of game day munchies… and this year, Chipotle is giving away free burritos during the big game. So if you, too, mostly watch sports for the food, here’s how to win free Chipotle during the NBA Finals. Sofritas, I have my eye on you.

To honor one of the nation’s biggest basketball games, Chipotle is doing what they like to call "freeting." On their website, they define "freeting" as: "To Tweet free Chipotle during the 2019 men’s professional basketball championship series every time an announcer says the word ‘FREE’ on air during a game." So basically, during the series game, Chipotle will tweet a unique keyword that unlocks up to 500 free entrées during the first half of each game, and up to 1,000 free entrees during the second half of each game, every single time the announcer says "free." Easy, right? 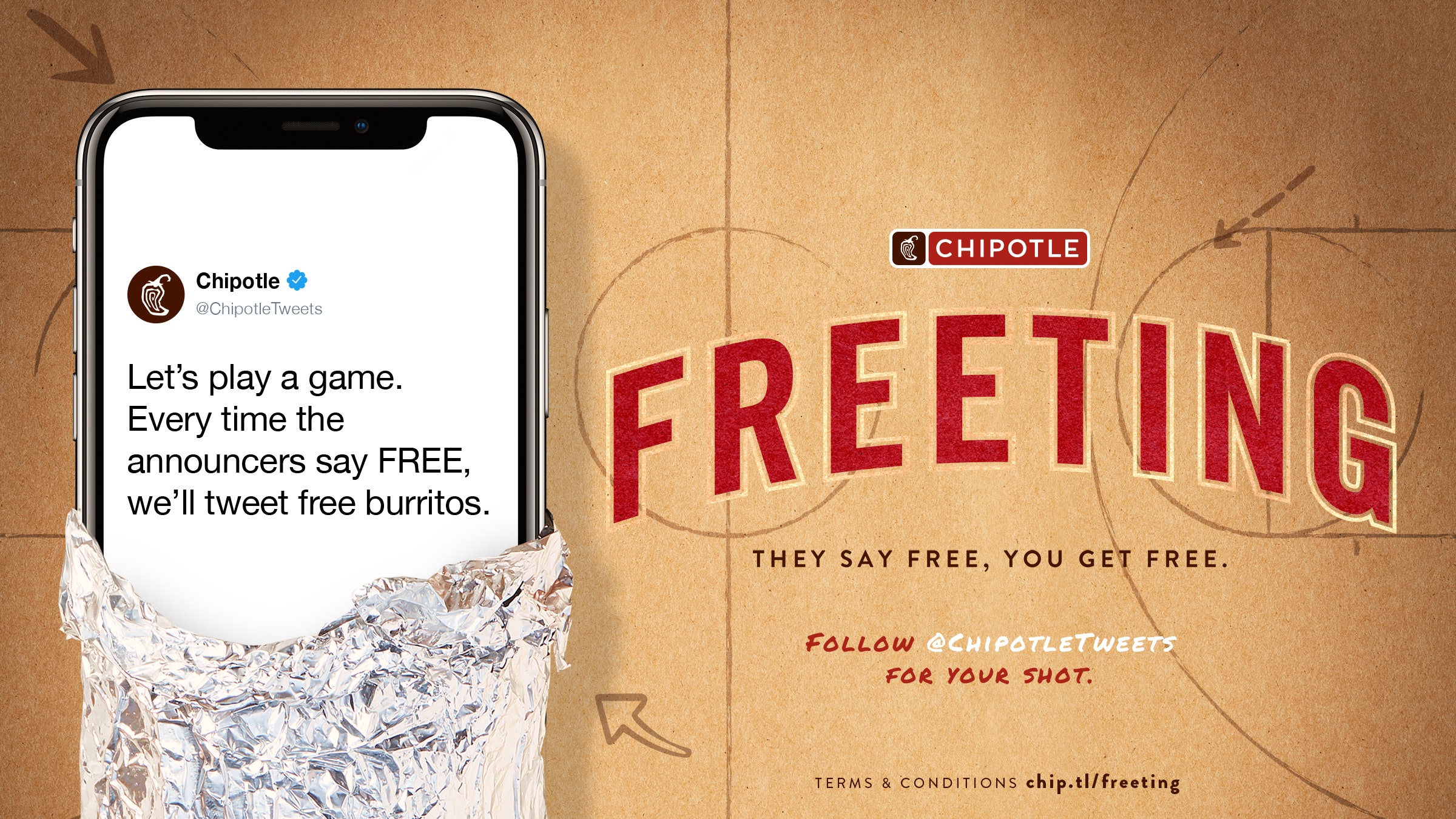 The first 500 people to text the code to 888222 will receive a redemption code for a free entrée, according to the chain’s website. Yes, you heard that correctly, and then, the first 1,000 people to text it when “free” is mentioned in the second half will also receive a redemption code for a free entrée. Said redemption codes can be used at participating Chipotle locations nationwide. There’s no purchase necessary to participate, and the odds of winning depend on the number of games played, the number of times the word "free" is used, and the number of entries received. It’s a total dream come true, and to be honest, I’m not sure how any of us deserved any of this. But I couldn’t be more thrilled about it.

If you’re filling up on nachos and wings during the actual game, though, you’ll be happy to know you don’t have to redeem your win for a free entrée immediately. In fact, you can use it now through July 14, according to the terms and conditions, and here’s a pro tip: If you place an order prior to June 9, you can actually get it delivered for free during any day throughout the series, according to Chipotle. That’s right — between May 29 and June 9, all delivery orders that are placed via Chipotle’s website, through the iOS app, Google Play app, and through DoorDash will be totally free. Just make sure the meal has at least a $10 value and you’re golden.

If you aren’t super invested in basketball and your friends are, though, check out how to make watching basketball a little more enjoyable. Indulge on all of the fantastic food, get some backstories on underdog players or coaches, maybe place some bets, or simply enjoy the time you have with your friends. If you’re with the right people, it can be a really fun experience.

Don’t get me wrong — watching basketball is always fun. But the chance to win free burritos during the NBA Finals definitely ups the ante. Speed texting is honestly my sport of choice, so put me in, coach — that redemption code is all mine.