Standing together. Prince Harry and his wife, Meghan Markle, joined other members of the royal family as Queen Elizabeth II’s legacy was honored at a Westminster Hall service.

Harry, William Walk Next to Each Other at Queen’s Westminster Procession

As the 20-minute service concluded on Wednesday, September 14, King Charles III and Queen Consort Camilla led the group’s departure. Princess Anne and Sir Timothy Laurence quickly followed as they were ushered into their waiting cars. Harry, 37, and Meghan, 41, for their parts, shared a brief display of affection during their turn. 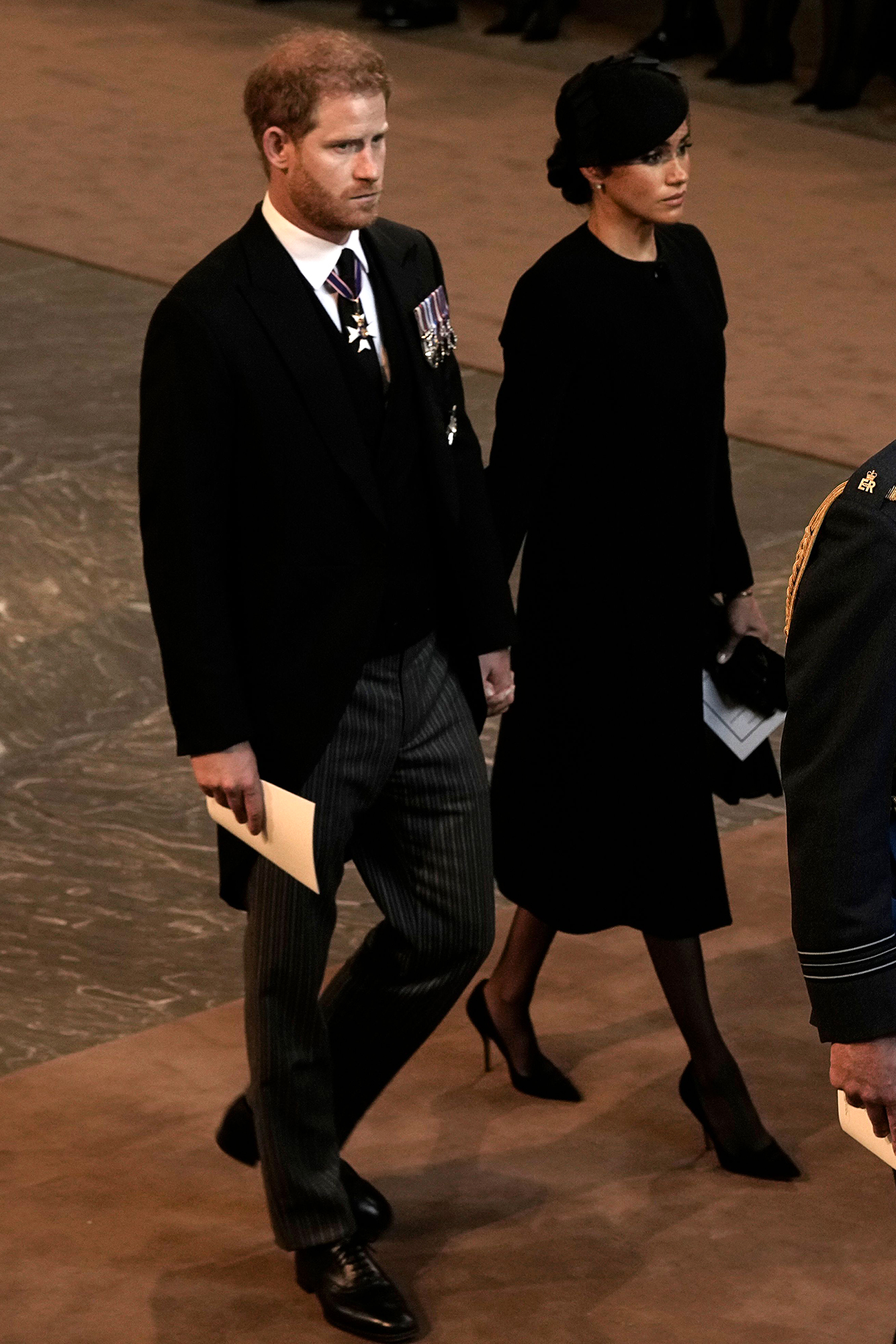 The Duke of Sussex held the Suits alum’s hand as they exited the chapel. Other members of the royal family and their respective spouses, in comparison, were not spotted arm-in-arm as they departed.

Harry had marched alongside brother Prince William during the nearly one-mile walk from Buckingham Palace to Westminster Hall, where the queen is set to lie in state for four days ahead of her Monday, September 19, funeral. Harry and the Prince of Wales, 40, stood side-by-side as they followed members of the British military and Elizabeth’s coffin. The king, 73, and his siblings Anne, 72, Prince Andrew and Prince Edward also joined the processional, as well as Anne’s son, Peter Phillips.

The Daters’ Handbook actress, for her part, arrived via car alongside Sophie, Countess of Wessex, who married Edward, 58, in 1999. Camilla, 75, was photographed riding alongside Princess Kate on Wednesday. 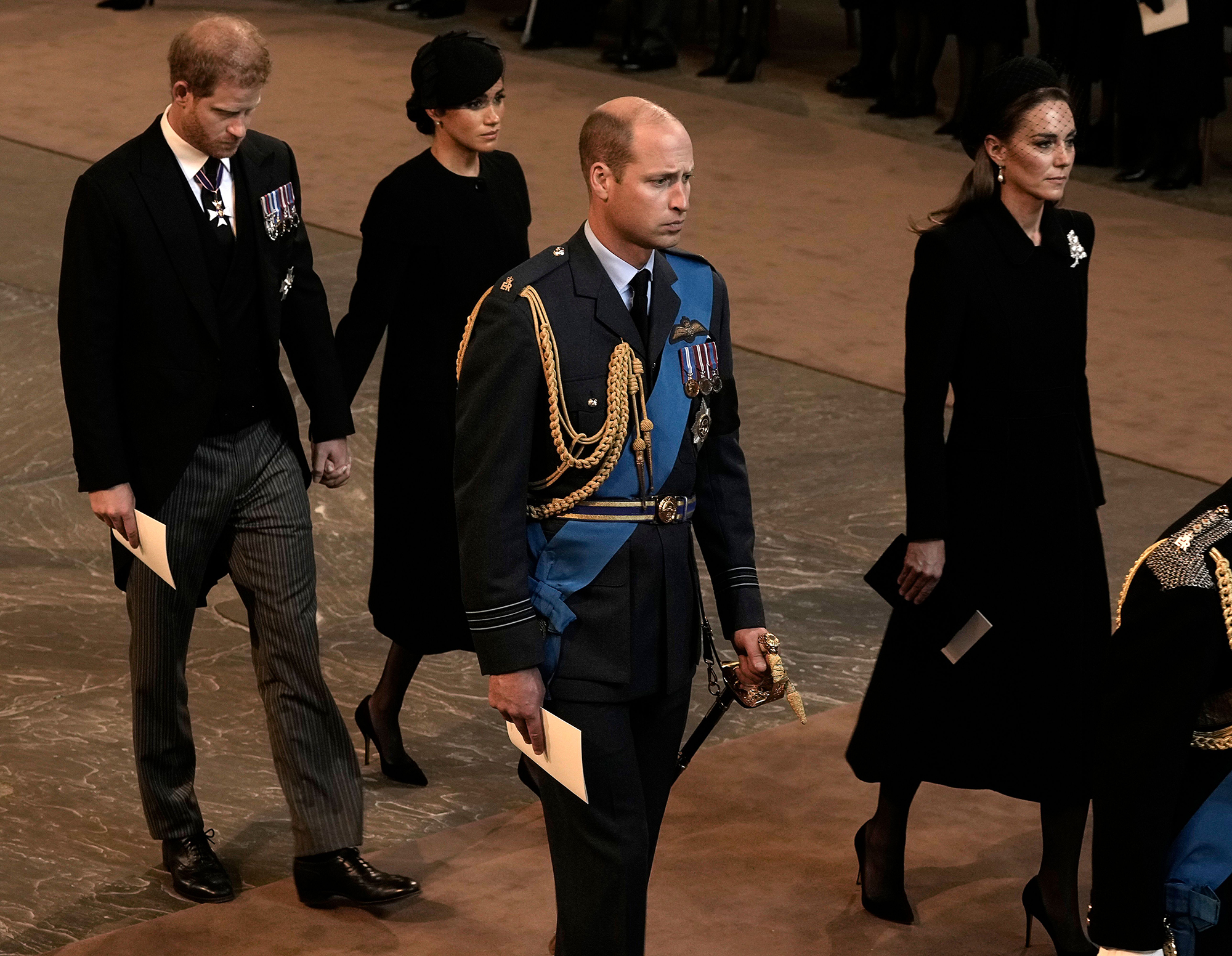 As the service began, Harry and Meghan stood behind the other members of The Firm with Charles and Camilla standing at the front — just behind the queen’s casket.

After 70 years on the throne, Buckingham Palace announced on Thursday, September 8, that the queen had died at the age of 96 at Balmoral Castle. After lying in state in Scotland, Elizabeth’s body was transported back to London on Tuesday, September 13. Following her death, Harry has been outspoken about the loss of Her Majesty.

“In celebrating the life of my grandmother, Her Majesty The Queen — and in mourning her loss — we are all reminded of the guiding compass she was to so many in her commitment to service and duty. She was globally admired and respected,” the BetterUp CIO wrote in a Monday, September 12, statement. “Her unwavering grace and dignity remained true throughout her life and now her everlasting legacy.”

Harry continued: “Granny, while this final parting brings us great sadness, I am forever grateful for all of our first meetings — from my earliest childhood memories with you, to meeting you for the first time as my commander in chief, to the first moment you met my darling wife and hugged your beloved great-grandchildren. I cherish these times shared with you, and the many other special moments in between. You are already sorely missed, not just by us, but by the world over. And as it comes to first meetings, we now honor my father in his new role as King Charles III.”

During the Wednesday outing, Harry wore a morning suit while William, Charles, Anne and Edward donned their military uniforms. As the California resident — and the “Archetypes” podcast host — had stepped down from their roles as senior royals in 2020, Harry was also stripped of his ceremonial military titles. As a result, Buckingham Palace previously confirmed that he would not wear his uniforms for Elizabeth’s funeral events.

“[Prince Harry] will wear a morning suit throughout events honoring his grandmother,” Harry’s spokesperson said in a Tuesday statement. “His decade of military service is not determined by the uniform he wears and we respectfully ask that focus remain on the life and legacy of Her Majesty Queen Elizabeth II.”