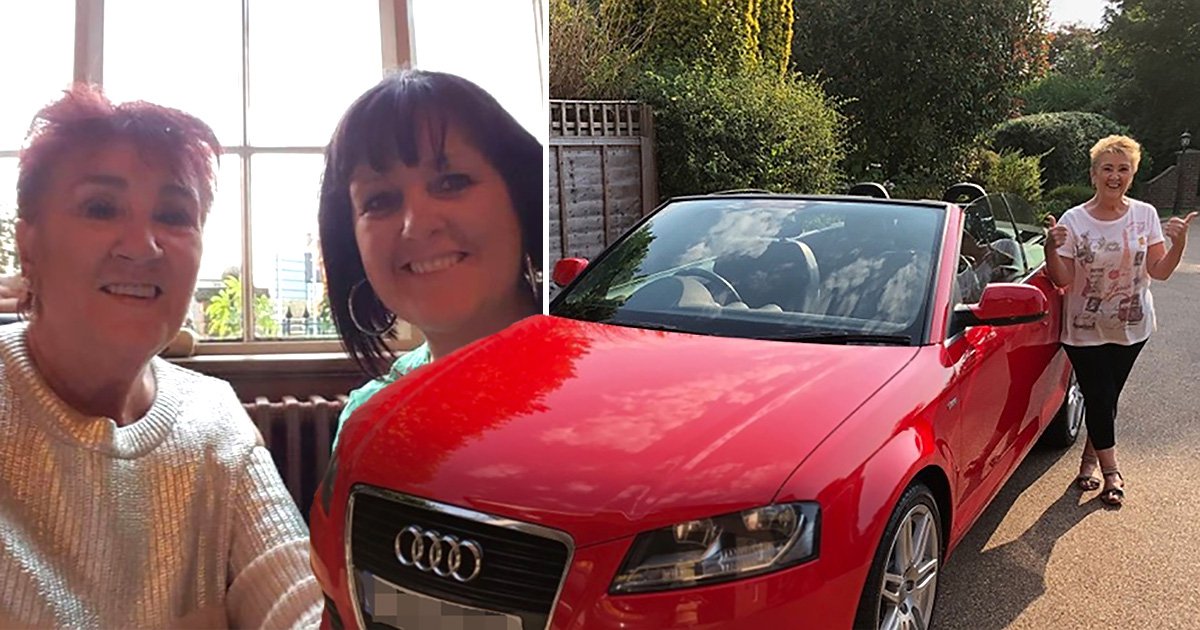 Perhaps a snazzy new car will be enough of an incentive.

It certainly was for great-grandma Pauline O’Connor, 70, who has finally ditched the 20-cigarettes-a-day habit she’d stuck to for more than 50 years.

With the money she has saved from no longer buying cigs, Pauline was able to buy herself a flame-red Audi A3 convertible, and she’s been loving life in the fast lane ever since.

Pauline grew up in a time when smoking ‘made you look big’, and bought her first cigarette for ‘thruppence’ when she was just 11 years old.

Soon, her life revolved around smoking, with Pauline getting through 20 cigerettes a day.

But when the great-grandmother of 13 lost her dad to a smoking-related condition, she knew she needed to make a change.

A single ‘miraculous’ neuroscience-based therapy session helped her kick the habit for good.

And to have something to show for her efforts, Pauline stashed away the money she would have spent on cigarettes and bought a fancy car.

Pauline, who separated from her former husband, Tony, also now 70, several years ago, said: ‘I started putting money away and I was looking for a car.

‘I bought the sports car because I was feeling so much younger in myself. I felt more healthy and more alive.

‘My only regret was that I didn’t do it sooner!

‘My dad always smoked roll-ups and when I was 10, he used to roll me up a Rizla paper to hold, like a pretend cigarette.

‘I wanted to be as big as my dad. He was only a little man, but he was the best man God could have put on this earth.

‘I used to say, “Oh Dad, roll me up a cigarette’” and he would. He always had a roll-up dangling from his lip.

‘Everybody was doing it. It was just the known thing! Smoking was everywhere.

‘You could buy one over the counter for about thruppence. I used to do that and I thought I was big! It was the thing to do.’

As an adult, Pauline married in 1969 to odd job man Tony, who was also a smoker.

They had two daughters, before separating in 1973, with Pauline and the girls moving back in with her parents. Three years on, Pauline began working at the ICI offices.

Pauline never smoked while she was pregnant, but her life increasingly revolved around the habit.

She said: ‘As a working woman, if something had upset me, I could smoke up to 20 a day.

‘Even if there wasn’t much going on, I’d maybe still have five in a day.

‘I couldn’t tell you how much I spent on them. It would have gone into the thousands over the years! I’d always find the money.

‘I would find myself thinking, “Oh god, I must go and have a cigarette”. I loved a cigarette.

‘I’d get up, go outside, stand by the patio door and have a cigarette and then I’d make a cup of tea, before getting ready for work.

‘Then, I’d come out of work and I would have a cigarette – it was like my little reward.’

Pauline tried to quite once or twice, but it didn’t stick until she lost her father to a heart attack.

Another turning point was a move to Eastbourne to be by the sea.

In 2011, Pauline had fallen and injured her knee and, on the recommendation of a friend, had visited Bob Bees, a psychotherapist based in East Sussex, who helped cure her limp – which she believes was psychosomatic – following the injury.

Bob’s technique, known as brain working recursive therapy (BWRT), is based on neuroscience and helps create new neural pathways in the brain – to rewire the triggers that cause someone to experience anxiety, phobias, or to instinctively reach for a cigarette.

Bob Bees offers ‘Stop Smoking’ therapy, for £250 for a double session lasting up to three hours.

He said: ‘To help Pauline stop smoking, I used a technique called BWRT, which doesn’t use hypnosis, medication or any form of nicotine replacement. In many cases, as in Pauline’s, it usually takes just one session.

‘For Pauline, as for anyone who has ever smoked, there are lots of situations or things that can trigger the ‘desire’ for a cigarette. For example, there may be an association between a cup of tea and having a cigarette.

‘You put the kettle on, and this triggers a chain of events in the brain and, without even thinking about it, the individual reaches for their cigarettes.

‘I take the time to find all the triggers and any other underlying past events that cause someone to smoke. This ensures they remain a lifelong non-smoker!’

Pauline visited him for just one session focused on smoking on September 30, 2014. She ripped up her remaining cigarettes then and there, and hasn’t smoked since.

‘I only had a few, but I brought them in and he showed me a jar of tar.

‘Then I broke up the cigarettes in front of him and put them in the bin. I didn’t smoke from then on and I haven’t done since 2014 – seven years ago.

‘That urge, that feeling of dying for a smoke, I’ve not felt that ever since. When I do see someone smoke now it makes me feel horrible.’

It was Bob who recommended Pauline treat herself with the money she saved from quitting smoking.

‘I was spending so much money on cigarettes,’ said the grandma.

‘So, I thought, “Why don’t I put that money aside?” And, every time I would have spent £5-10 on cigarettes, I would put it in an envelope.

‘I felt so much better in myself, so I treated myself to an Audi A3 TDI red convertible sports car.’

‘I think it’s wonderful – why shouldn’t I treat myself?’

Pauline is sharing her story to persuade people to not start smoking in the first place.

‘If only the youngsters of today could realise what they’re doing to themselves,’ she said.

‘All those chemicals! The destruction smokers are doing to their bodies is unreal.

‘If I could have my time again, I wouldn’t have picked up those cigarettes.’

How much money could you save by quitting smoking?

If you want more tips and tricks on saving money, as well as chat about cash and alerts on deals and discounts, join our Facebook Group, Money Pot.

Do you have a story to share? We want to hear from you.

Get in touch: [email protected]