Home » Lifestyle » Give us ‘AviationKeeper’ to survive, air industry pleads

A coalition of aviation unions and businesses including Virgin Australia have issued an plea to the federal government to extend JobKeeper for their sector as they face another year of minimal international travel.

Fourteen unions and companies, including some that have been at odds in the past, signed a joint letter to Prime Minister Scott Morrison asking that the wage subsidy scheme continue past March for the aviation industry. 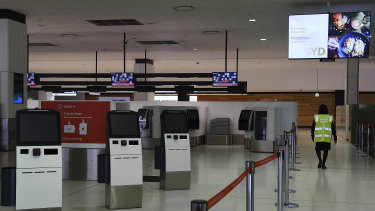 Airlines have been particularly hard hit by the pandemic.Credit:Kate Geraghty

Australians were last week told to expect curbs on international travel for most of this year because it remains unclear how effective planned vaccinations will be in slowing the virus' spread.

The sector is proposing its "AviationKeeper" scheme would run until flights and travel returned to normal.

"Our members have been to hell and back over the last year, and 2021 looks no more promising," said Ms Gaske, an assistant national secretary. "If borders are to remain closed, JobKeeper is to end, and banks are to finish up the mortgage holidays, how does the Prime Minister expect aviation workers to survive?"

At least 11,000 workers lost their jobs in the sector during the coronavirus pandemic and on Monday, Health Department secretary Brendan Murphy cruelled hopes of an imminent recovery in tourism, saying there would not be substantial overseas travel to Australia this year.

"I think we’ll go most of this year with still-substantial border restrictions," Professor Murphy said. "Even if we have a lot of the population vaccinated, we don’t know whether that will prevent transmission of the virus, and it’s likely that quarantine will continue for some time."