The future of St Basil’s Homes for the Aged in Victoria, the site of Australia’s deadliest coronavirus outbreak so far, is in doubt after it lost federal funding and safety regulators warned of “an immediate and severe risk” to the safety and health of residents.

It comes after the Greek Orthodox church, the owner of St Basil’s, slashed the annual rent it receives from the Fawkner home by $650,000 last year. Over the past six years, the church has taken payments from St Basil’s totalling $16.7 million. 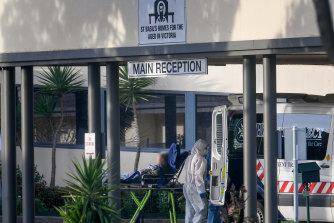 St Basil’s aged care home in Fawkner was the site of one of Victoria’s deadliest coronavirus outbreaks.Credit:Justin McManus

Last July and August, 45 of St Basil’s117 residents died from COVID-19. The home now has only 41 residents.

On December 24, the federal government’s Aged Care Quality and Safety Commission published a notice that St Basil’s was “not eligible to receive Commonwealth subsidies for any new care recipients” for six months.

The home has until July to meet government standards to be eligible for future funding.

The commission reported St Basil’s failed half of the standards homes must meet to be eligible for federal aged care funding. It was previously given the opportunity to address management issues after the COVID-19 outbreak swept through the home. 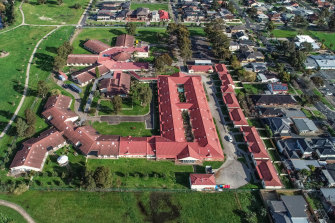 St Basil’s Homes for the Aged in Fawkner, where 45 residents died.Credit:Joe Armao

St Basil’s sits on three hectares of land overlooking the Merri Creek and is owned by the Greek Orthodox church, which also operates the facility.

An investigation by The Age last year found the annual rent of $2.5 million paid by St Basil’s to the church was nearly twice the amount both a council rates valuation and one of the state’s most senior commercial agents said it should pay.

In its most recent report, St Basil’s confirmed the church had cut the rent to $1.85 million in the latest financial year. The accounts were signed off in October and submitted to the charities regulator at the end of January.

Christine Golding, whose 84-year-old mother Efraxia died after contracting coronavirus at the home, said St Basil’s had paid less to the archdiocese because so many residents were either deceased or families had taken them to another home.

Former state government minister Theo Theophanous, a prominent member of the Greek community, has previously described the aged care home’s handling of the pandemic as “a debacle”, and described the rent paid to the archdiocese as “exorbitant”.

Last week Mr Theophanous said he was unsurprised the federal government had cut off payments to St Basil’s for new residents. “Proper accountability and responsibility needs to be taken by St Basil’s if they are going to be allowed to continue operation,” he said.

A St Basil’s spokeswoman said it was continuing to upgrade the facility and that its priority was the health and wellbeing of residents. St Basil’s had been “working well” and adhering to government regulations until residents were removed in July 2020, the spokeswoman said.

“The board is committed to executing the recommendations of the [Aged Care Quality and Safety] Commission and is engaging clinical and professional experts to ensure the safety and highest quality care of residents.“

The spokeswoman also said the archdiocese received rent based on market value for St Basil’s and the cut in rent it received was due to falling income at the home. “Funds contributed to the archdiocese have been reduced to accommodate lost income and to ensure the organisation’s financial future.”

St Basil’s was bought by the Greek Orthodox archdiocese of Australia for $525,000 in 1993. Senior church figures sit on its board. A council valuation puts the value of land and buildings on the site at about $24 million. 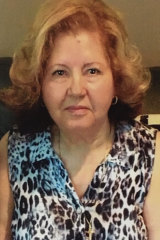 Fotini Atzarakis who died in the Austin Hospital at the end of July, after contracting coronavirus at St Basil’s.

Aged care operators in the Greek community have attracted a steady flow of new residents to their homes, as the wave of migrants that came to Australia from the 1950s onwards enter their 70s and 80s and 90s and need more intensive care.

Kathy Bourinaris’ mother, Fotini Atzarakis, was 77 when she died in the Austin Hospital at the end of July, after contracting coronavirus at St Basil’s.

Ms Atzarakis went into the home for a brief round of respite care on June 29. A month later she was dead, following a 10-day battle with coronavirus in the Austin Hospital.

“She had Parkinson’s and we just needed a bit of a break. We thought if she is going to be safe anywhere, it’s going to be a nursing home,” Ms Bourinaris said

Ms Bourinaris said her father, who was married to her mother for 62 years, felt lost. The couple, who had three children and eight grandchildren, came to Australia in the late 1960s.

“St Basil’s didn’t know what they were doing,” said Ms Bourinaris, who has been interviewed by the coroner about her mother’s death. 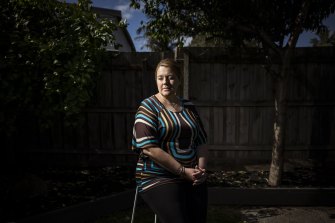 She was not contacted by St Basil’s about her mother’s death – but she did receive a call from the home in November.

Ms Bourinaris thought the home was calling to ask how she was coping after her mother’s death. Instead, they were ringing to see if her mother was interested in coming in for a tour, to see if she wanted to come and live at the home.

“I was shocked. I told them, “My mum passed away there you morons’.”

St Basil’s was contacted for comment but did not respond.

Lawyer Tony Carbone is leading a class action of relatives who died at the home. He said there had been a large number of complaints made to the aged care quality commission about St Basil’s, but until now no meaningful action had been taken against the operator.

“So for the commission to come up with this sort of conclusion appears to show a massive shift – up until now, no one has expressed any joy dealing with the commission.”

Mr Carbone said that, if breaches continued, he would consider taking action against the commission as well as part of the legal case.

“If there were any other breaches, we will pursue them too – they are supposed to be overseeing all of these homes and if they’re not making homes comply, surely they’ve got to be in the gun.”

Aged Care Services Minister Richard Colbeck said the health of older Australians and the workers who care for them was “of the utmost importance”.

St Basil’s Homes for the Aged remained subject to a notice to agree issued by the Aged Care Quality and Safety Commission, he said.

“A notice to agree is a serious enforcement measure which, if ignored, can lead to the approval to provide Australian government subsidies being revoked, and comes at a cost to the provider.”

Get our Coronavirus Update newsletter

Stay across the news you need to know related to the pandemic. Sent Monday and Thursday. Sign up here.