Home » Lifestyle » Forget the Ruby Princess, this plague ship was the real hell

Typhus is a particularly gruesome disease. Spread by fleas and body lice, it thrives with close human contact – in that sense, much like another disease we’ve become very familiar with recently.

A ship was the perfect setting for coronavirus’s dastardly precursor, says actor-turned-author Michael Veitch. His play Hell Ship tells the gruesome, true story of a journey from England to Australia gone wrong; a mid-last century tale that makes the Ruby Princess look like a walk in the park. 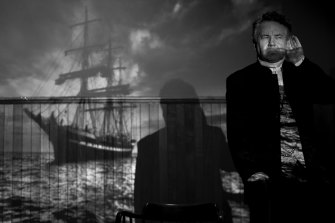 Veitch documents one of the most deadly journeys in Australian history in Hell Ship.Credit:Suzanne Phoenix

The D-Generation actor adapted his book of the same name as a one-hander for the stage: he plays several characters including assistant ship’s doctor James Veitch, his great, great-grandfather.

Modern hygiene put paid to the disease but it had a massive impact on Melbourne at the time. In Veitch’s family, for many years, there was silence around it – perhaps because it was so traumatic.

In 1852, the prospect of travelling 15,000 kilometres from Liverpool to the other side of the world would have been an exciting and daunting prospect for many who boarded the Ticonderoga. Many on board were Scottish emigrants seeking a better life. The ship was state of the art, a double-decker clipper that held 800 people, packed tightly. “That lower deck was hellish – even a good voyage in those days would have been absolutely unbearable for us,” says Veitch.

About a month into the trip, just as they hit the equator, typhus broke out. Soon ship’s doctor Joseph Sanger was infected: leaving 24-year-old naval surgeon James Veitch, on his maiden voyage, in charge. One passenger, 22-year-old Annie Morrison, volunteered to help nurse the sick. The two would later marry.

“These stories are part of knowing where we’ve come from … the story of Ticonderoga is one of the legends we’ve grown up with.”

“They did their best, they inspected people but they had no idea of the pathology; their knowledge was effectively useless,” says Veitch. “All they knew was that to be clean might help, so they washed people. It went through the decks and as this happened, the weather gets colder.”

The trip across the Great Southern Ocean was “basically a storm that never stopped … so rough that they couldn’t even bury people at sea”.

Veitch says passengers were often too terrified to help the crew. “Even apparently hardened sailors were nearly fainting with nausea about what was happening down below … A lot of it was moving corpses around, so many just took to their beds – the worst possible thing they could have done.”

Whole families were wiped out and young children left orphaned. Two grieving mothers threw themselves overboard. An estimated 100 people died on board the Ticonderoga. Arriving at Port Phillip Bay after 90 days at sea, the ship was ordered to stop at what later became Port Nepean Quarantine Station. Hospital ships were sent to help treat the sick, making matters worse as the ill were contained at close quarters on board: another 92 died in quarantine. 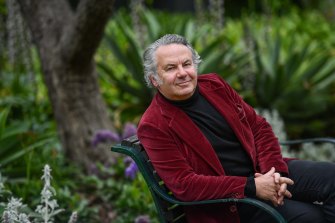 Michael Veitch explores the particular hellish journey that beset a ship on its way to Australia in the 1850s.Credit:Joe Armao

A commission of inquiry months later found overcrowding the culprit. A plaque to commemorate those who died is at the Quarantine Station cemetery and a nearby bay is named after the ship. Fever Beach by Mary Kruithof, published in 2002, documents the ship’s voyage and how the experience forced authorities to establish a quarantine system.

While it toured regionally and was performed at the Port Fairy Folk Festival, the play’s Melbourne debut has been delayed three times by the COVID-19 pandemic. Peter Houghton directs the show while Veitch’s son Thomas plays live cello as soundtrack.

Much to Veitch’s delight, many descendants of those who survived the voyage have made contact.

“They always speak about the ship’s doctor and how great a job he did,” he says.

“These lovely people at just about every show, they likewise had probably heard fragments of the story down the generations.

“These stories are part of knowing where we’ve come from … the story of Ticonderoga is one of the legends we’ve grown up with.”

Hell Ship is at 45 Downstairs from November 23-28. If restrictions lift, extra tickets will be made available.