An avalanche of financial support aimed at the nation’s poorest helped them endure the worst effects of the coronavirus recession while some of the country’s richest households faced hardship for the first time.

Special analysis of household spending patterns by the Australian Bureau of Statistics released on Wednesday reveals despite the worst economic downturn since the early 1930s there was a drop among the poorest 20 per cent in key measures of financial stress. 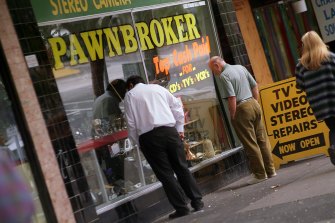 ABS data shows an increase across all income groups in the use of pawnshops during the coronavirus recession.Credit:Michael Rayner

The Morrison government introduced the coronavirus supplement of $550 a fortnight last year for welfare recipients and made payments to retirees to help them through the recession. State governments also delivered financial assistance aimed primarily at low-income earners.

The ABS data shows this extra support, which has now been wound back, did help the poorest Australians.

In the September quarter of 2019, almost 17 per cent of the poorest 20 per cent struggled to pay a utility bill. But a year later this had dropped to less than 10 per cent.

Similarly, 10.2 per cent of the lowest income households faced difficulties with paying a bill twice in the previous 12 months in September last year. Twelve months earlier this had been 13.4 per cent.

Across almost all measures of financial stress, such as raising $2000 at short notice, getting financial help from family or being unable to meet the minimum repayment on a credit card, the proportion of low-income Australians in distress fell during the recession.

But the same data also shows financial stress indicators largely increased for the other 80 per cent of Australians. While their levels of stress were still much lower than the poorest people in the community, many found themselves in financial difficulty.

The proportion of the richest 20 per cent of Australians unable to raise $2000 at short notice more than doubled to 6.5 per cent during the recession. There was an even larger increase in the proportion of high-income Australians who deferred dental treatment which reached 5.1 per cent.

Middle-income Australians also suffered more financial stress. Almost 10 per cent of this group could not pay a utility bill in September last year compared to less than 8 per cent in the same period during 2019.

About 5.5 per cent of middle-income Australians pawned something to make ends meet compared to 3.5 per cent a year earlier.

One way many Australians sought to ease their financial pressures was by accessing their superannuation. More than $36 billion in super was taken out by 3.5 million people.

The bureau found 29 per cent of people used the cash to pay their mortgage or rent while 27 per cent used it for household bills. But 13 per cent put the money into their savings while 6 per cent said they paid off a car loan or bought a vehicle.

The scheme was supposed to be only available for people “adversely financially affected by COVID-19”.

“One in 8 people who accessed the scheme were clearly not eligible. They have paid a huge price for the error,” he said.

“Super funds are returning 8 per cent this year. The same money sitting in a bank account will return less than 1 per cent minus tax.”