Home » Lifestyle » Father, 34, whose cancer was untreatable chose to die at home

Heartbroken widow, 34, reveals how her policeman husband who had incurable cancer refused to spend his final months in a hospice so he could be at home with their children during lockdown

The widow of a 34-year-old policeman who died of cancer has revealed how he chose to be cared for at home in his final months so that he could spend more time with his young children.

Chris Mutter, 34, from Dunfermline, Fife, was initially told he had acid reflux when he sought medical advice last summer for symptoms he suffered when he sat down to eat.

However, he and his wife Maxine, 29, were devastated in October when they discovered he actually had oesophageal cancer.

When he was told the cancer was untreatable, Maxine has revealed how the father-of-two declined spending his final months in a hospice and instead chose to stay at home with their children Ethan, three and Eden, one. 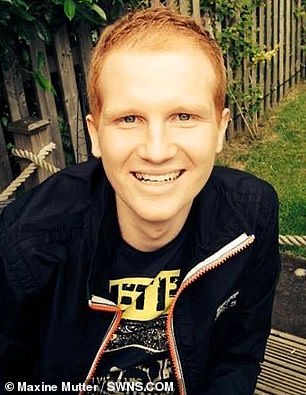 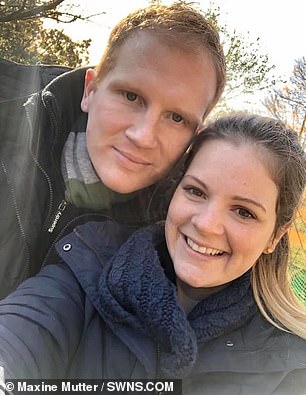 Maxine Mutter, 29, has revealed how her late husband Chris Mutter, who died of cancer aged just 34, chose to be cared for at home in his final months so he could spend more time with his children (pictured left, Chris, and right, The couple, who are from Dunfermline)

Maxine met her husband aged 18, when he was on duty outside a nightclub and she was out with her friends. They were together for 11 years.

She recalled how she had fancied her husband when she was a schoolgirl and used to see him in town, but the first time they met properly was when she was on a night out.

The mother-of-two spotted him in his fluorescent jacket and went to go and speak to him.

She said: ‘It was just before my 19th birthday, I saw him and I said to my friend, “I’m going to chat up Prince Harry”. 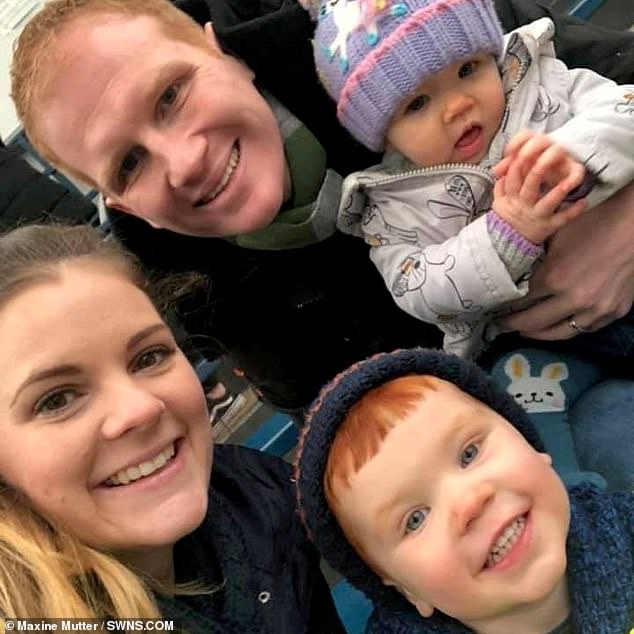 When he discovered the cancer was untreatable, the father-of-two declined to spend his final months in a hospice, Instead, he chose to stay at home with Maxine and their children Eden, aged one, and Ethan, aged three

‘My friend said, “Don’t do that”. Apparently I was stroking his yellow jacket, telling him how lovely it was.

WHAT IS OESOPHAGEAL CANCER?

Oesophageal cancer is a disease caused by tumours growing in the food pipe between the mouth and stomach.

The cancer is most common among people in their 60s and 70s and affects more men than it does women.

Oesophageal cancer can be hard to spot because it doesn’t cause any symptoms in its earlier stages, and only becomes noticed once the tumour has grown.

Symptoms may include difficulty swallowing, persistent indigestion or heartburn, loss of appetite, weight loss, and pain in the torso, chest or back.

Survival rates are not high for oesophageal cancer, with only 12 per cent of people surviving for 10 years after a diagnosis.

Six out of 10 patients die within a year of being diagnosed, according to Cancer Research UK.

The exact cause of the disease isn’t well known but smoking, drinking too much alcohol, being overweight or having an unhealthy diet are believed to increase someone’s risk of getting it.

‘I always saw him in the shopping centre when I was younger and thought he was so cute, but you don’t expect to come out of Sticks in Glenrothes and get married and have two kids.

‘I’m so grateful to have been given that opportunity, he was such a great guy.’

The couple were married for six years and Maxine, who works as a support worker at the Victoria Hospital in Fife, described Chris as her soulmate.

But last summer Chris decided to go to the doctors after finding he was suffering some pain with meal times and eating.

He was diagnosed with acid reflux, which is popularly known as heart burn, is a burning feeling in the chest caused when stomach acid travels up towards the throat.

Despite Chris’s diagnosis, Maxine said he continued to carry on working and was promoted to the rank of Inspector last September.

But the family were later told in October that Chris in fact had Stage 3 cancer, meaning it had spread beyond his oesophagus.

The disease, which is caused by tumours growing in the oesophagus – the food pipe between the mouth and stomach – is most common among people in their 60s and 70s.

Symptoms may include difficulty swallowing, persistent indigestion or heartburn, loss of appetite, weight loss, and pain in the torso, chest or back.

Maxine said: ‘He was fit and healthy so it was just absolute shock when we got that diagnosis.’

However, medics were optimistic he would be helped by chemotherapy.

But on March 11, when surgery was carried out, it was found the cancer was untreatable and the only option was palliative care – either at home or in a hospice.

The young mother took on the mammoth task of caring for him in his final months.

Meanwhile the couple decided to be honest with their children about the situation, after a lot of heartache, and Maxine’s sister, Megan Brown, 27, and her partner, Ali Harvey, 31, moved into the family home for the final month of Chris’ life. 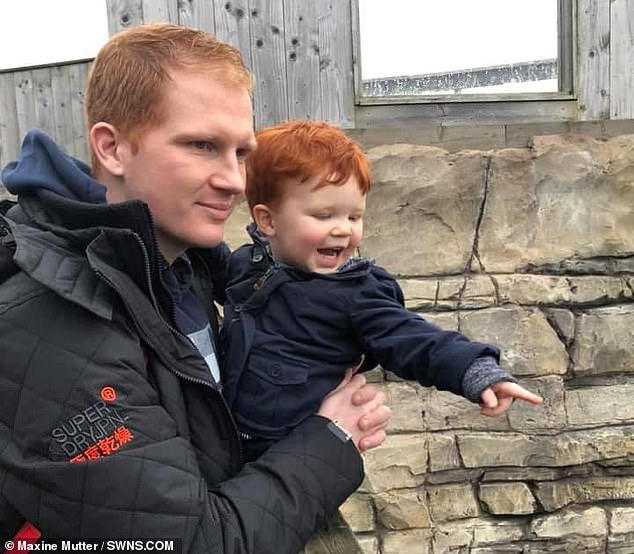 Maxine took on Chris’ care from her home so that he could continue to spend time with their children during the coronavirus lockdown (pictured, with their son Ethan)

Maxine explained: ‘Chris wanted to stay at home, especially because of the complications of COVID, so I helped nurse him and my sister and her boyfriend moved in for the last four weeks.’

‘Even when things got really tough, Chris said, “I would go into a hospice if you want” but I said no, it would have broken my heart to see him in a hospice.

‘At the time of the operation we knew a lockdown could be coming and I was keen to get him home before that happened.’

She explained that the family tried to continue as ‘normally as possible’, saying: ‘We wanted to keep it normal so we always ate in the bedroom, we always spoke, even if Chris was asleep, with the kids running in and out. 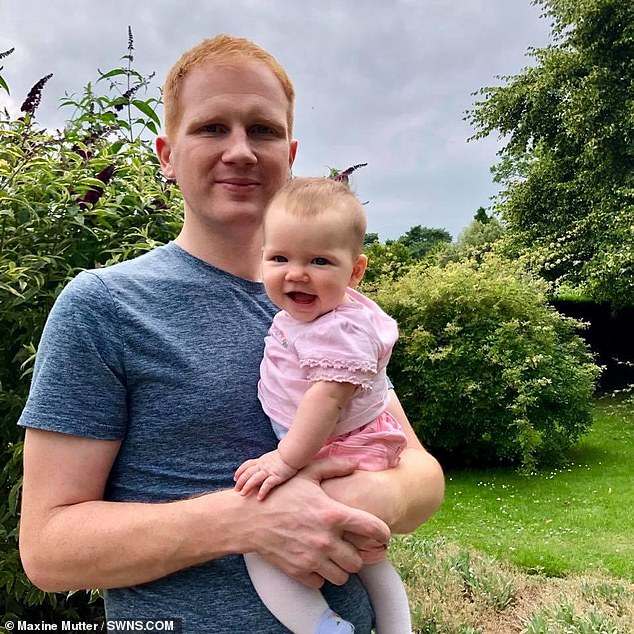 The family were told in October that Chris had had Stage 3 cancer, meaning it had spread beyond his oesophagus, but tried to maintain a normal family atmosphere at home for their children

They kept busy in the lockdown by painting the garden fence and going for walks, until those things became impossible as Chris’ health rapidly deteriorated.

She explained: ‘When McDonald’s opened, Chris said, “I’d like a Happy Meal with chicken nuggets” and we got him that, even though he only ate one chicken nugget.’

Maxine went on: ‘He was very scared, for such a strong man he was very vulnerable.

‘It was horrible, he was always propping up and supporting me, he was such a lovely man.’ 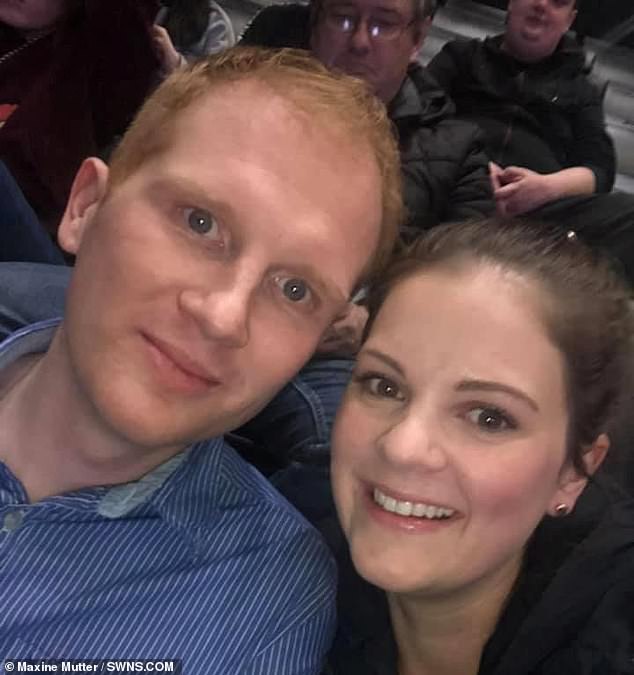 Maxine recalled how she had fancied her husband when she was a schoolgirl and used to see him in town, but the first time they met properly was when she was on a night out

Meanwhile she added: ‘Ethan is only three but is very switched on so we tried our best not to break down in front of the kids.

‘He was such a good officer, husband, dad, and all that has been stolen.

‘He was an absolutely brilliant dad and would drive me mad when he came in from work and got them all excited when I had just got them settled.’

Maxine explained: ‘He was always thoughtful and just adored me to the point when it was quite embarrassing at times.

‘He really was my soulmate and I will make sure Ethan and Eden never forget him.’