Home » Fashion flashback to the 2001 Oscars

It’s almost time for the Oscars! The 2021 Academy Awards takes place on April 25 this year, and ahead of the festivities Wonderwall.com is taking a look back — way back! — at the Oscars red carpet 20 years ago. Let’s take a look at the fashion from that night in 2001 night, starting with Renee Zellweger’s vintage Jean Dessès gown… The actress, who was on hand as a presenter, stunned in a not-so-mellow-yellow chiffon number from 1959 — a strapless dress that provided a cheery pop of color on the red carpet.

Decades before pantsuits were a major red carpet trend, Angelina Jolie arrived at the 2001 Oscars in this white Dolce&Gabbana suit. The movie star opted to rock her coordinates without a shirt underneath, adding white boots to complete her edgy look as a presenter.

This one was a polarizing pick! Kate Hudson wore Stella McCartney to the 2001 Oscars, but not everyone loved the weird vintage-inspired design with a high collar and a lot of fringe. In fact, the best supporting actress nominee landed on nearly every worst dressed list that year.

Julia Roberts won big 20 years ago! The actress brought then-boyfriend Benjamin Bratt to the 2001 ceremony where she took home a best actress Oscar for her work in “Erin Brockovich. She also landed herself on best dressed lists with this vintage Valentino gown. The black halter-style dress featured white stripes down the front and on the tulle skirt and train.

2001 was the year of Bjork’s famous swan dress! Yep, the Icelandic singer wore the iconic look at the 2001 Academy Awards and had everyone talking about her animal-inspired couture. She was nominated for best original song that year for “I’ve Seen it All” from “Dancer in the Dark.”

Halle Berry wowed in pale purple in 2001. Her halter-style dress included a plunging neckline and a pretty, delicate print in white down the bodice and skirt — perfect for presenting that night.

Yep, that’s Russell Crowe rocking a three-piece suit back in the day. He added a ribbon-style bow tie instead of a more traditional one and attached a Member of the Order of the British Empire medal to his suit — it had been given to the actor’s grandfather by Queen Elizabeth for his work as a World War II cinematographer. It certainly was a good luck charm, as Russell won a best actor Oscar for his performance in “Gladiator” that night.

“The Contender” star and best actress nominee Joan Allen’s high-necked coral gown by Michael Kors was one of the best looks of the night.

We couldn’t take our eyes off of Catherine Zeta-Jones’s bling! The actress, who was on hand as a presenter at the 2001 show, wore a stunning 50-carat aquamarine H. Stern necklace with a strapless black Versace gown.

We’re still used to seeing Frances McDormand take risks on the red carpet. In 2001, she showed up in this long-sleeved white shirt-style dress, which was covered in wrinkles. She was nominated for best supporting actress that year for her work in “Almost Famous.”

In 2001, Goldie Hawn arrived wearing this shimmery strapless Vera Wang gown that she accessorized with tiny sunglasses and minimal jewelry.

Tom Hanks and Rita Wilson were on hand at the 2001 Oscars as Tom was up for best actor for his performance in “Cast Away” (he lost out to Russell Crowe). Tom kept things classic in a black tux and bow tie while Rita complemented his color scheme in a white gown covered in black geometric shapes.

Julia Stiles looked lovely in Vera Wang — a slinky sequined number with spaghetti straps and a train that followed behind her on the red carpet.

Best supporting actress winner Marcia Gay Harden took home a statue for her work in “Pollock” while looking lovely in a burgundy strapless design by Randolph Duke that included a matching wrap. She added a diamond necklace and drop earrings for a little bit of sparkle on her big night.

Presenter Ashley Judd — who was accompanied by then-beau Dario Franchitti — sported a lilac gown with plenty of ruffles and a high-low hemline. She completed the look with layered necklaces and strappy silver sandals.

The funky red frock Sigourney Weaver wore to the 2001 Academy Awards had one shoulder embellished with flowers, an asymmetrical neckline and a thigh-high slit that showed off her fishnet-style tights.

Hilary Swank donned a slinky Versace gown back in 2001 to present an award. The golden frock featured a halter-style neckline, sparkly embellishments down the bodice and a pleated skirt.

Best actress nominee Juliette Binoche tapped designer Jean Paul Gaultier for her Oscars look that year. The “Chocolat” star arrived in this flapper-inspired getup, complete with layered necklaces, a knee-length cut and funky boots to finish off her look. 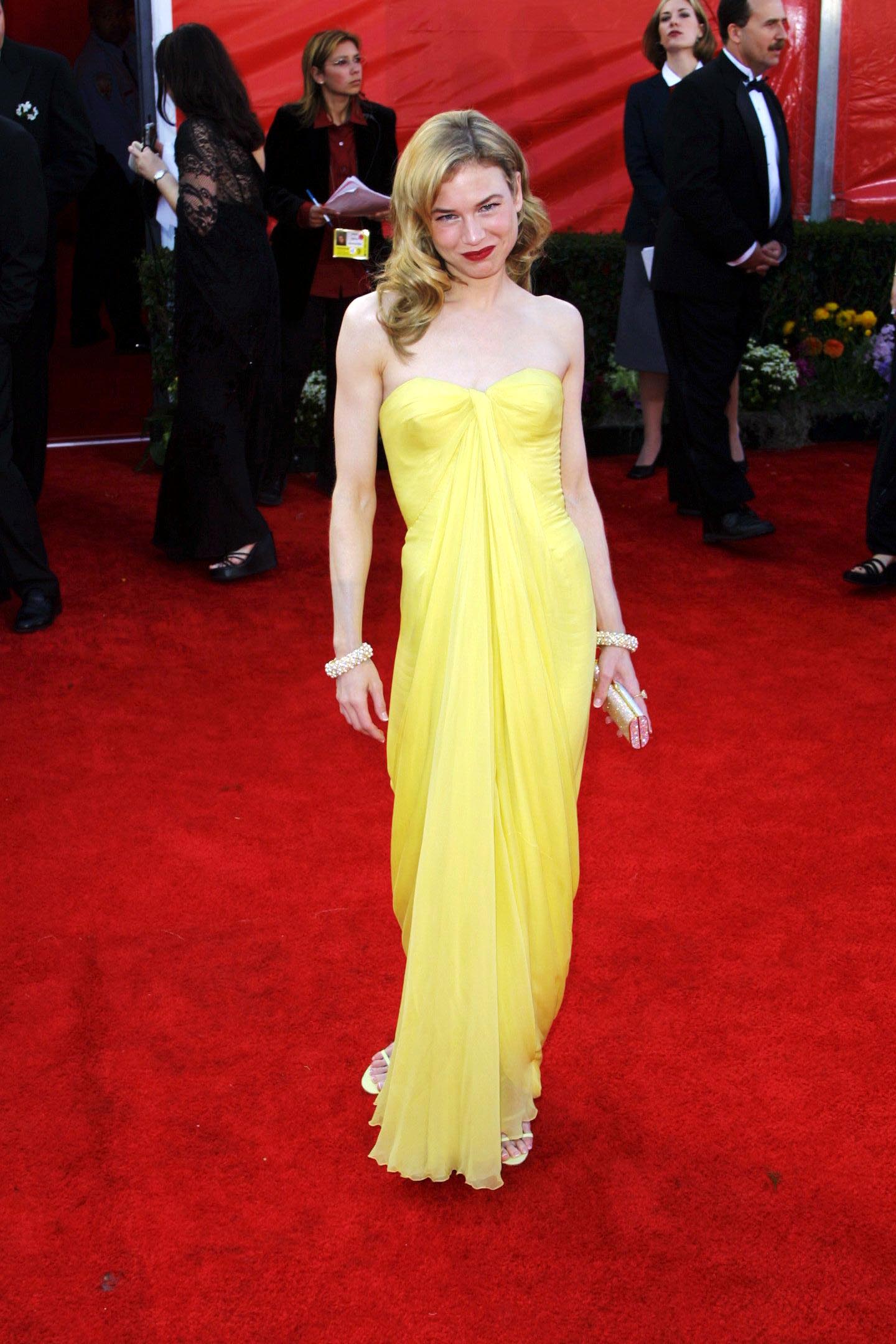 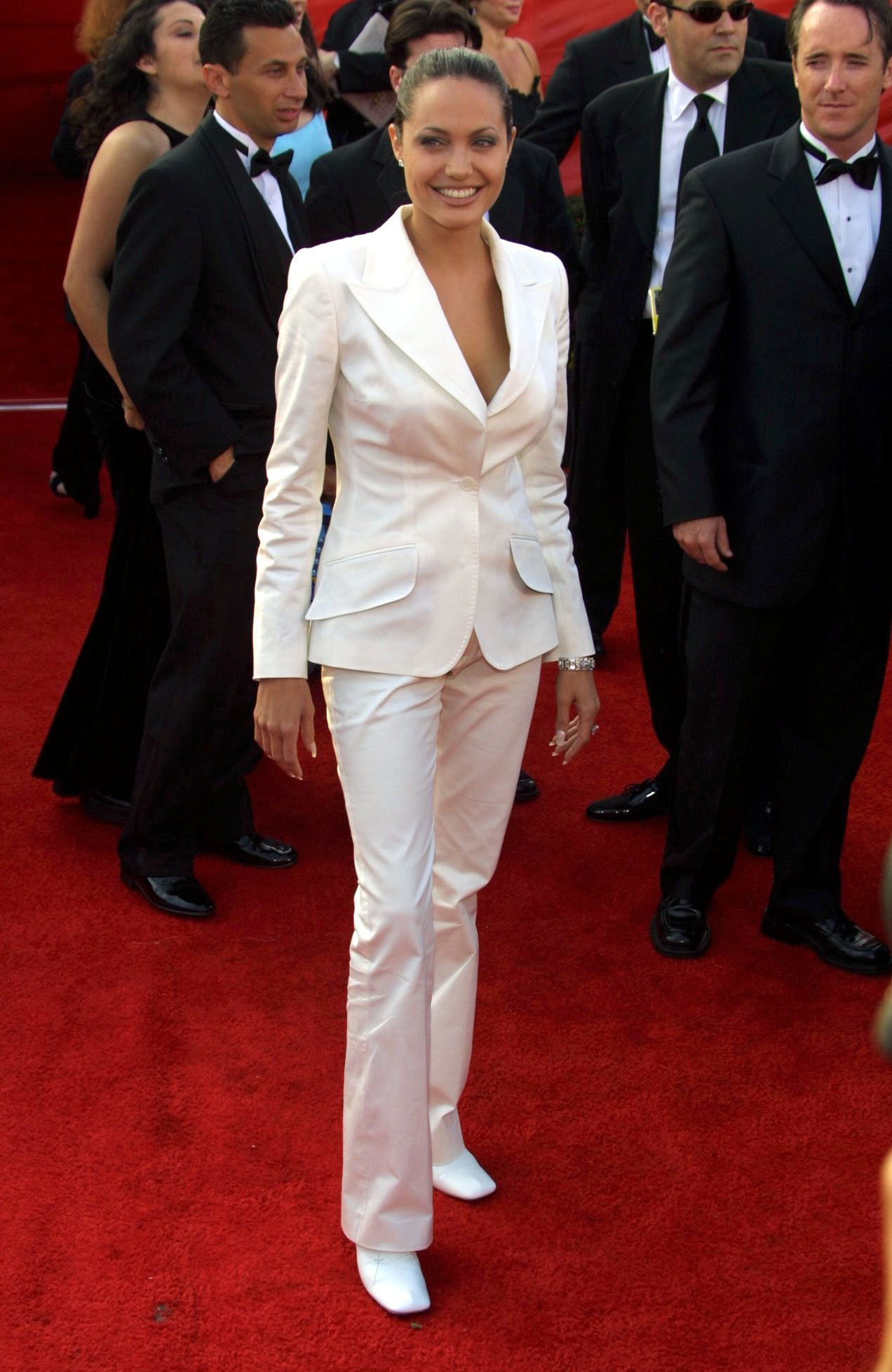 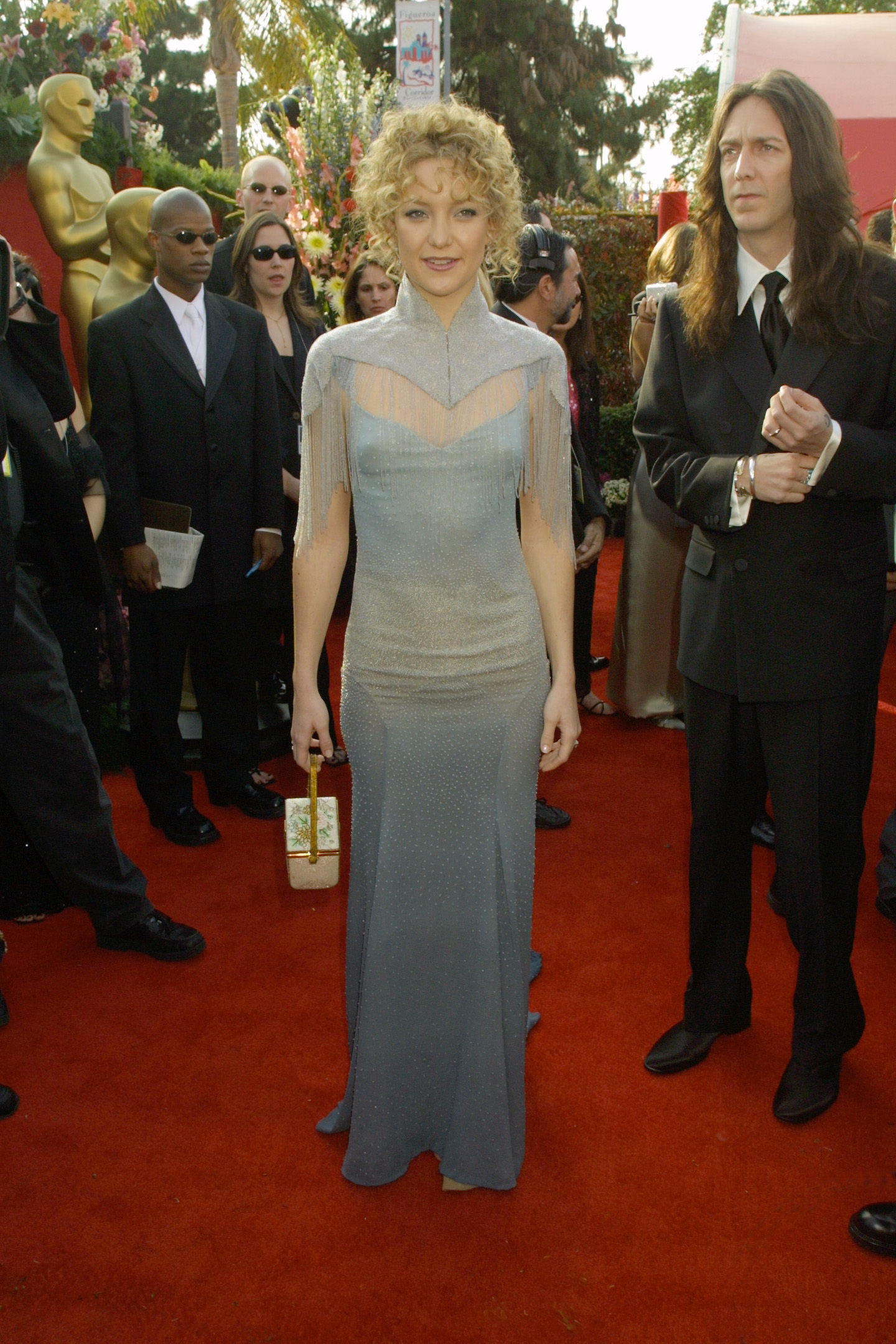 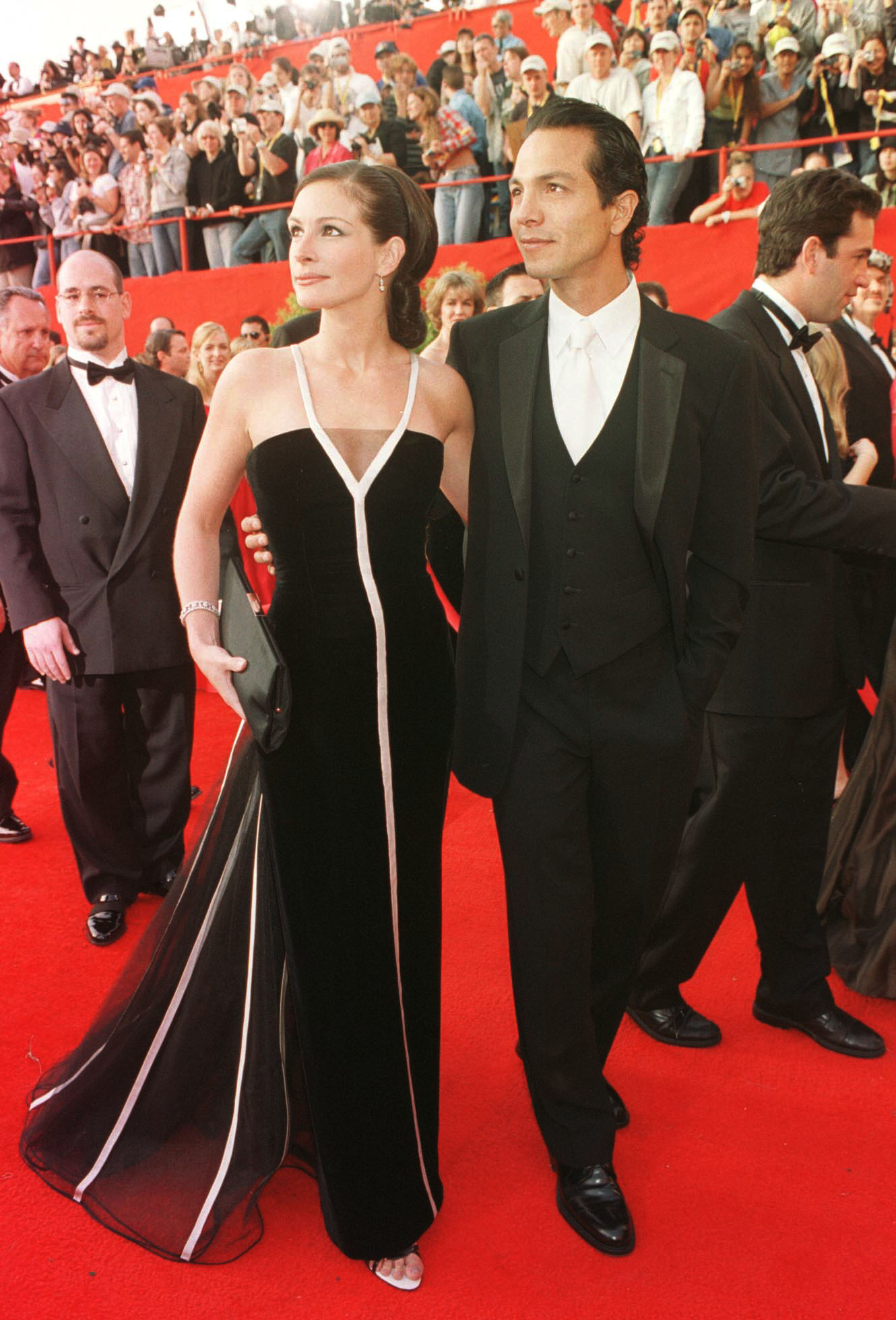 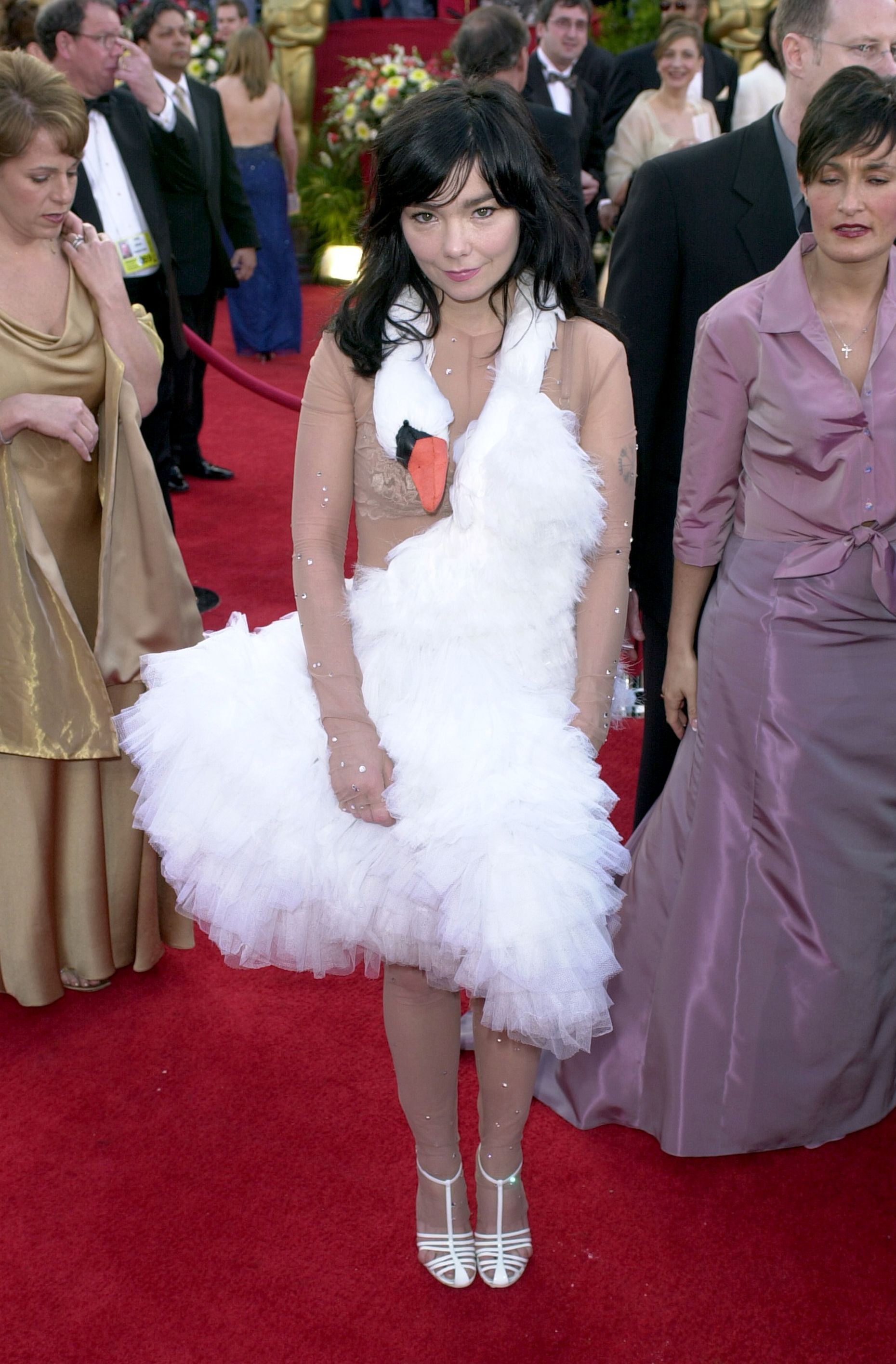 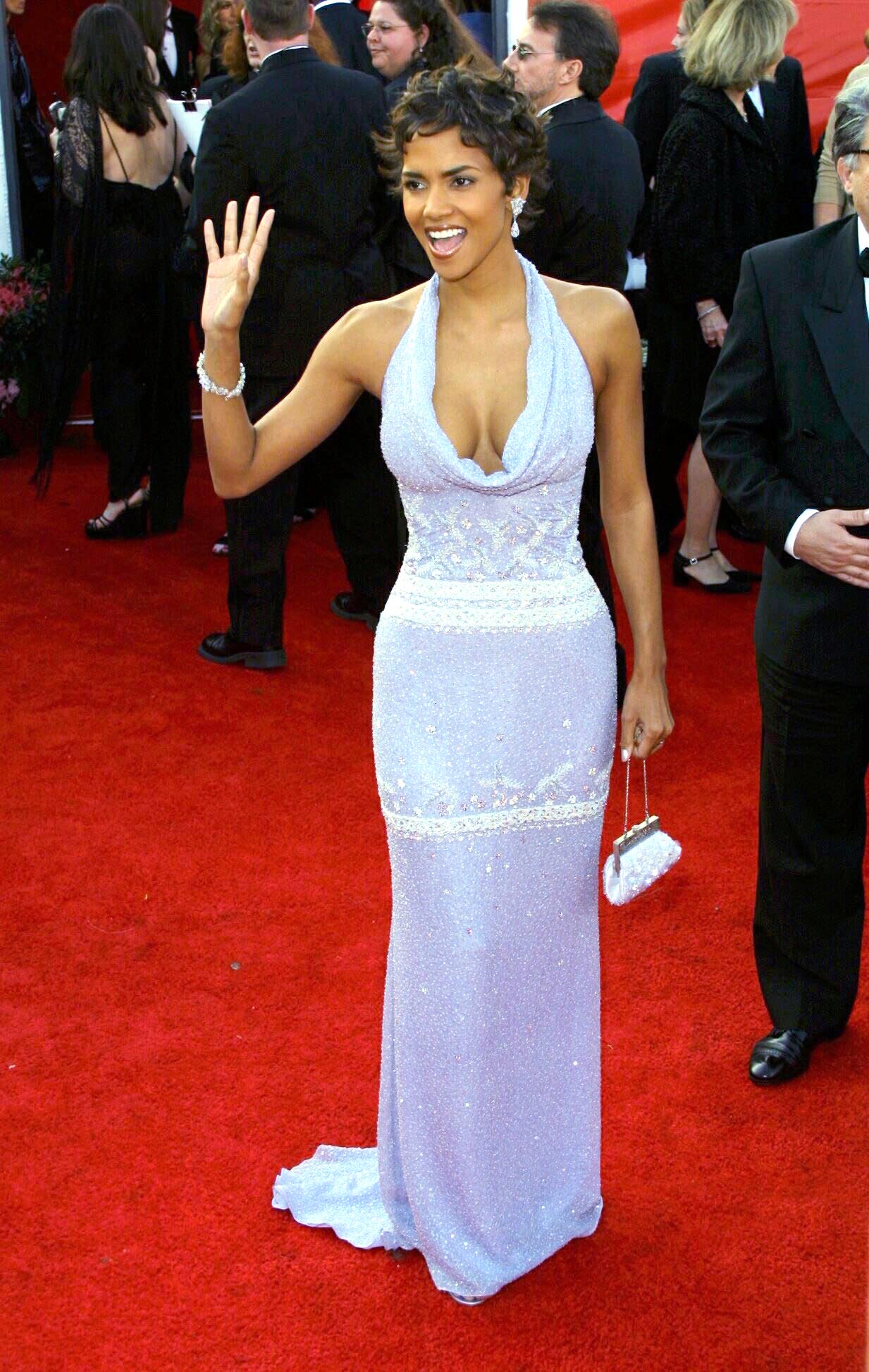 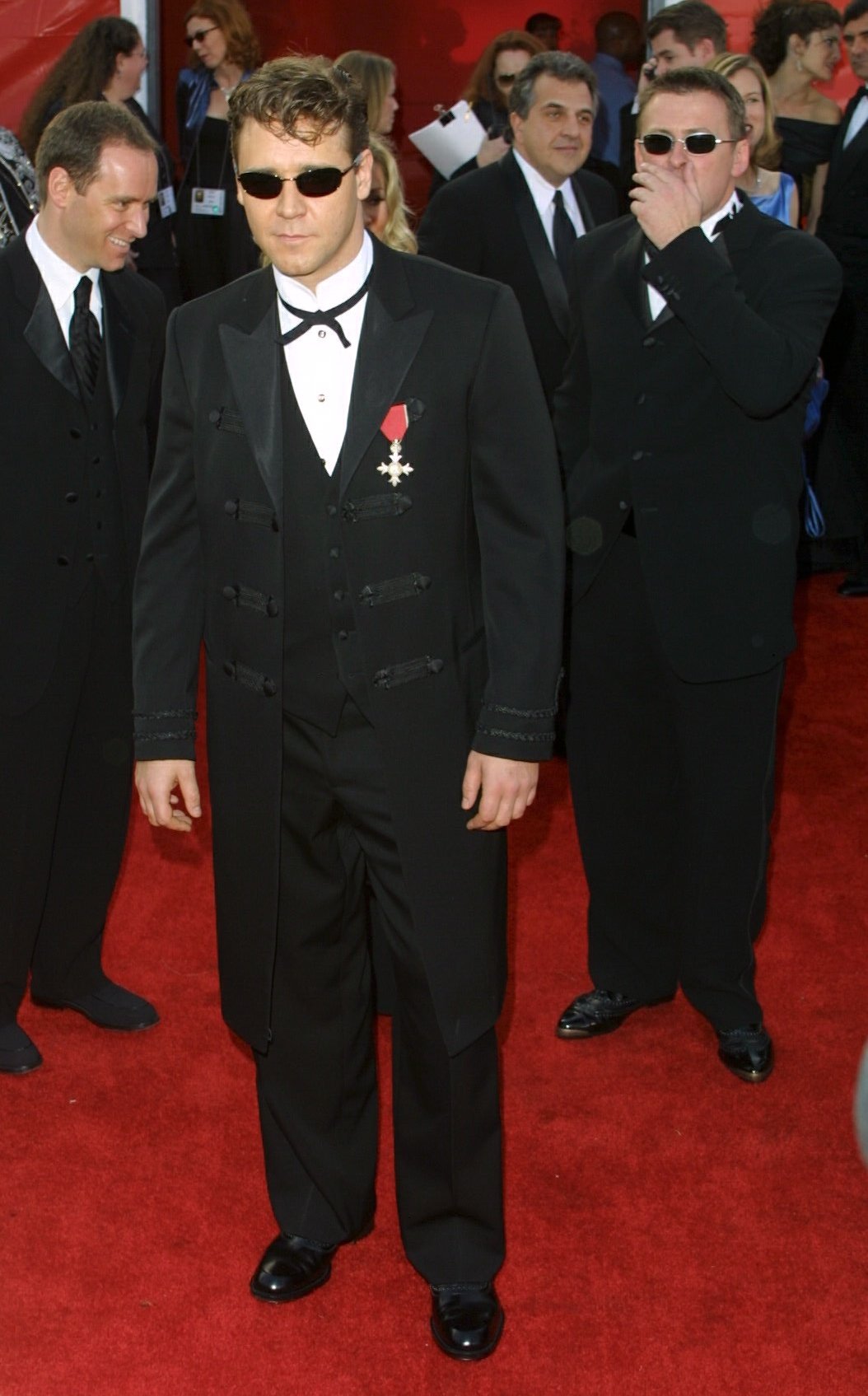 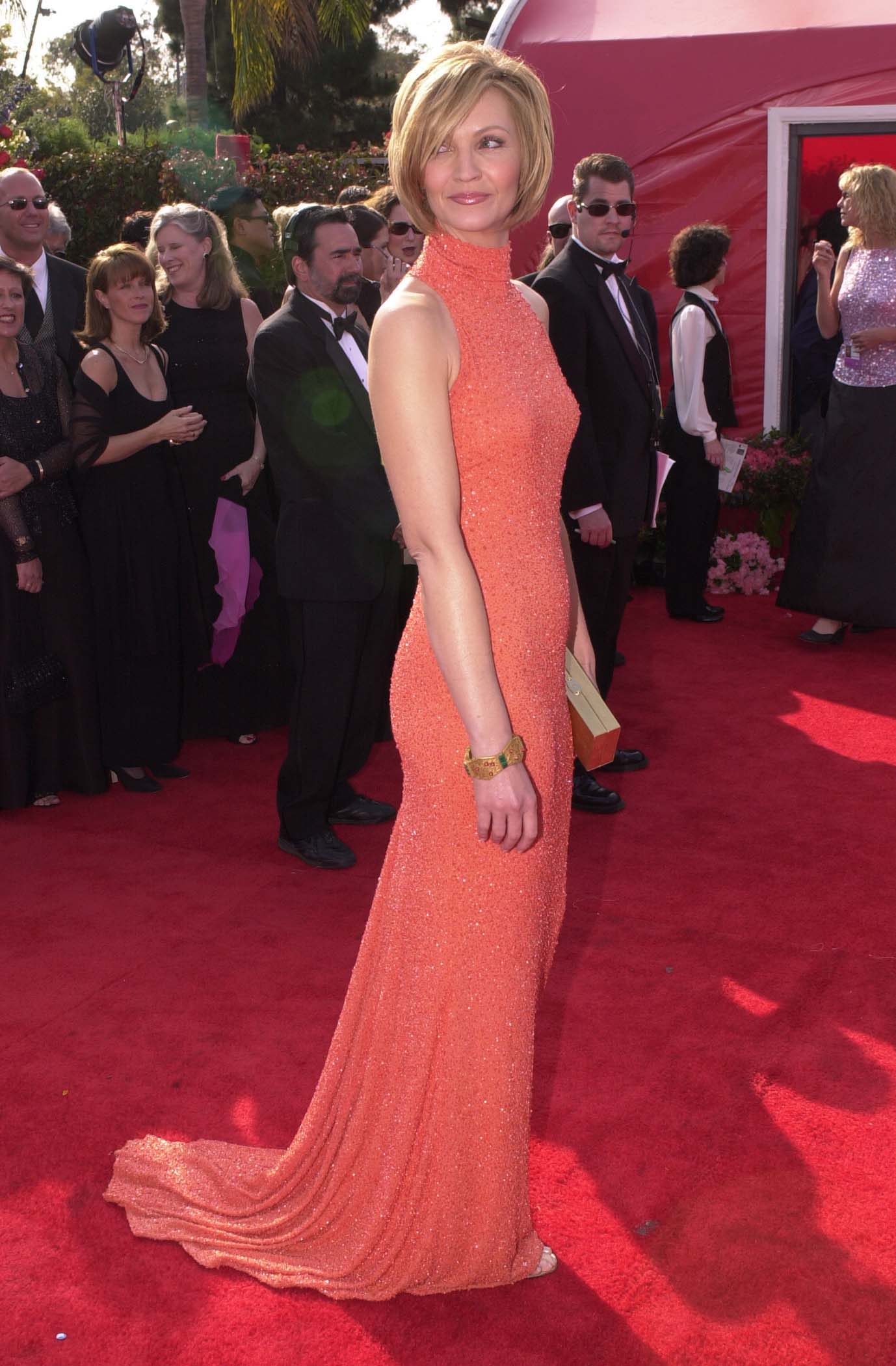 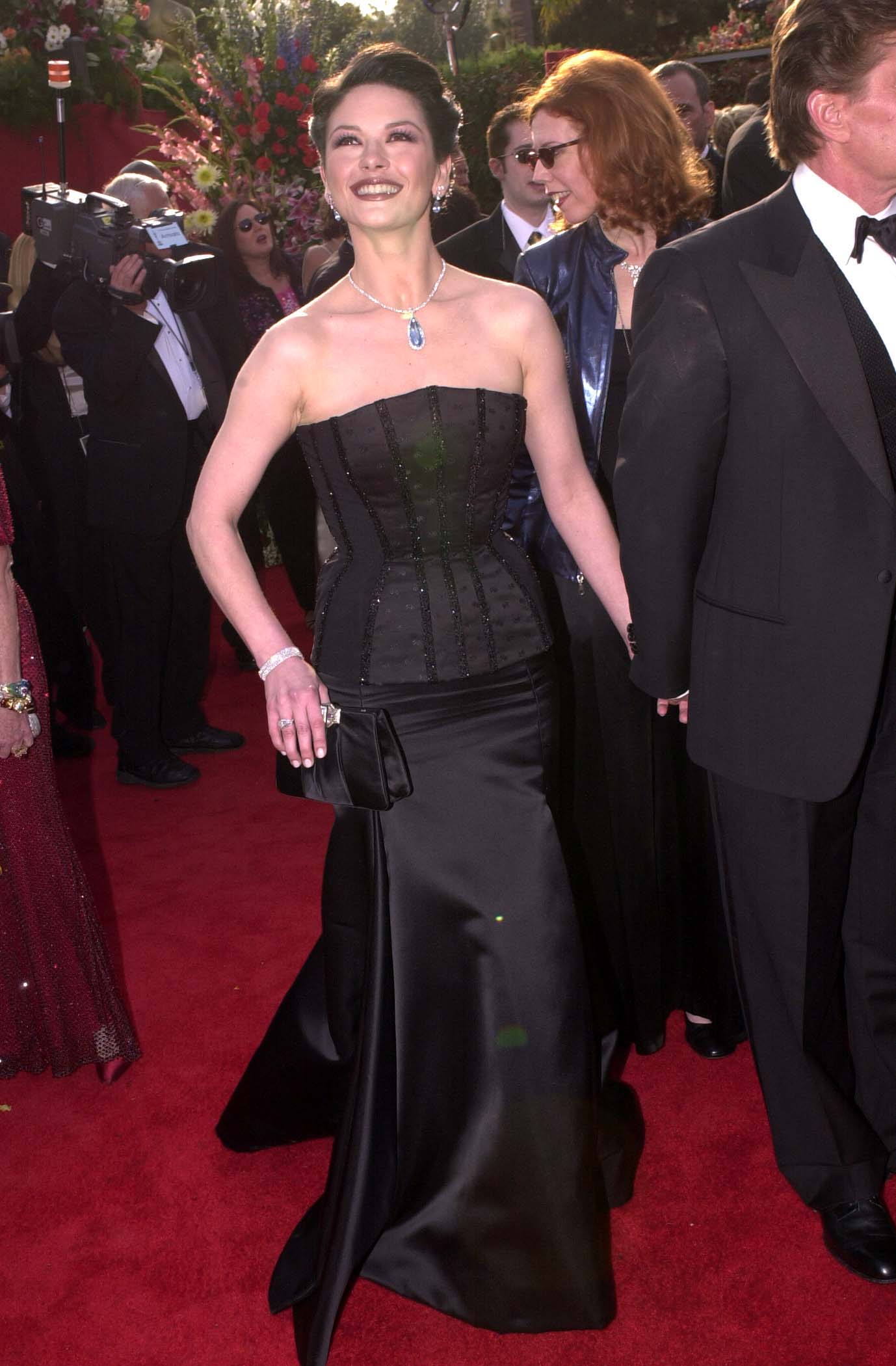 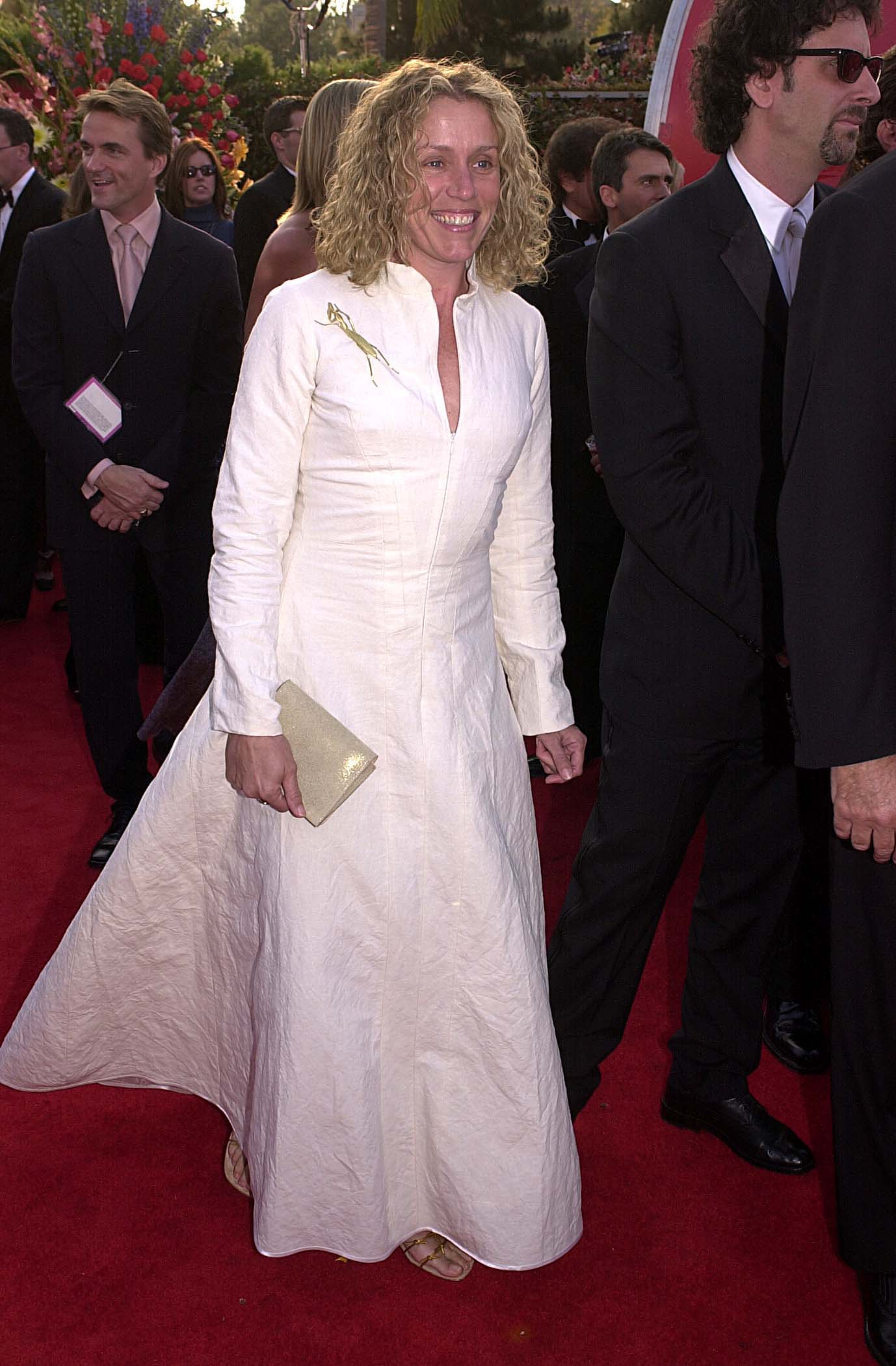 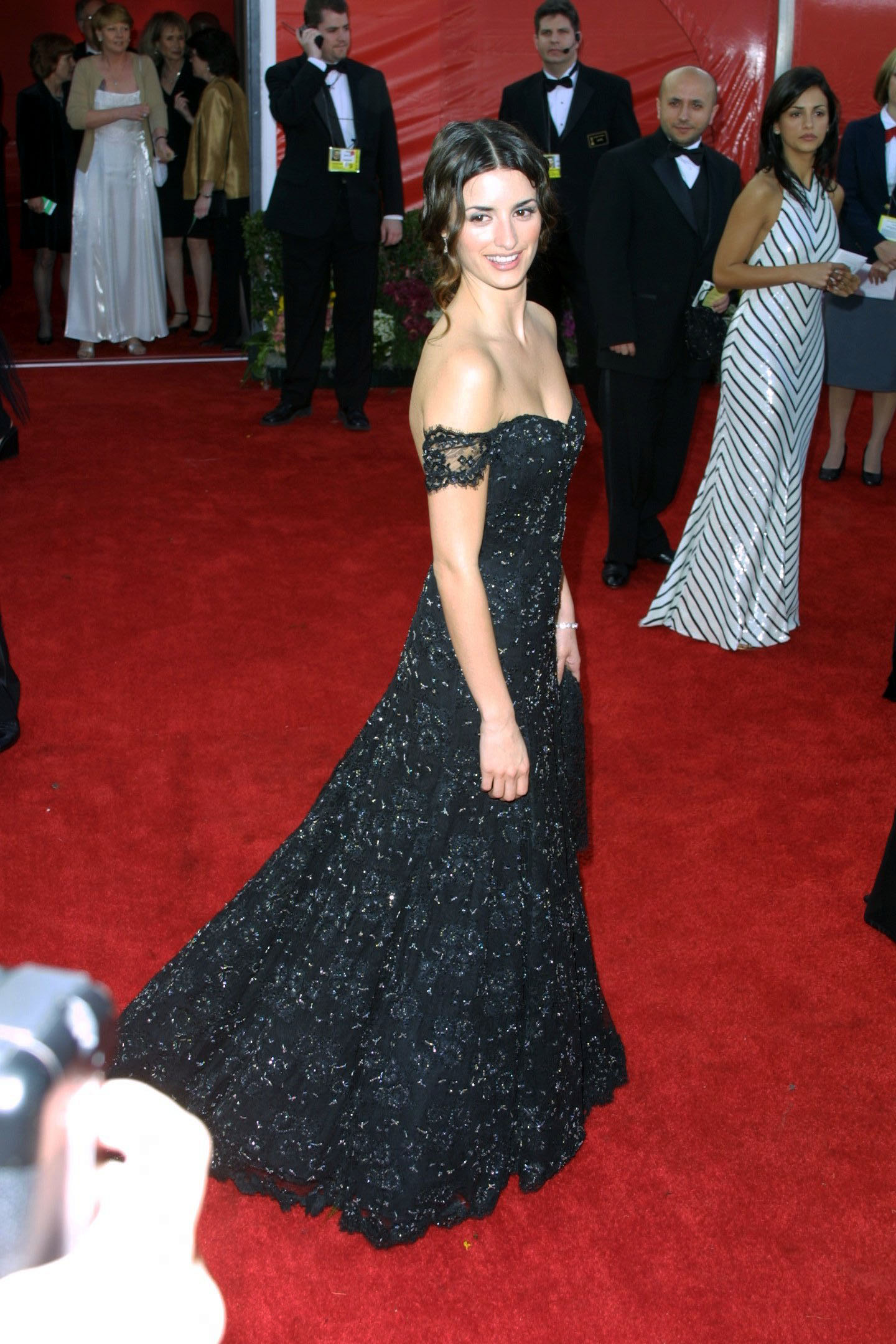 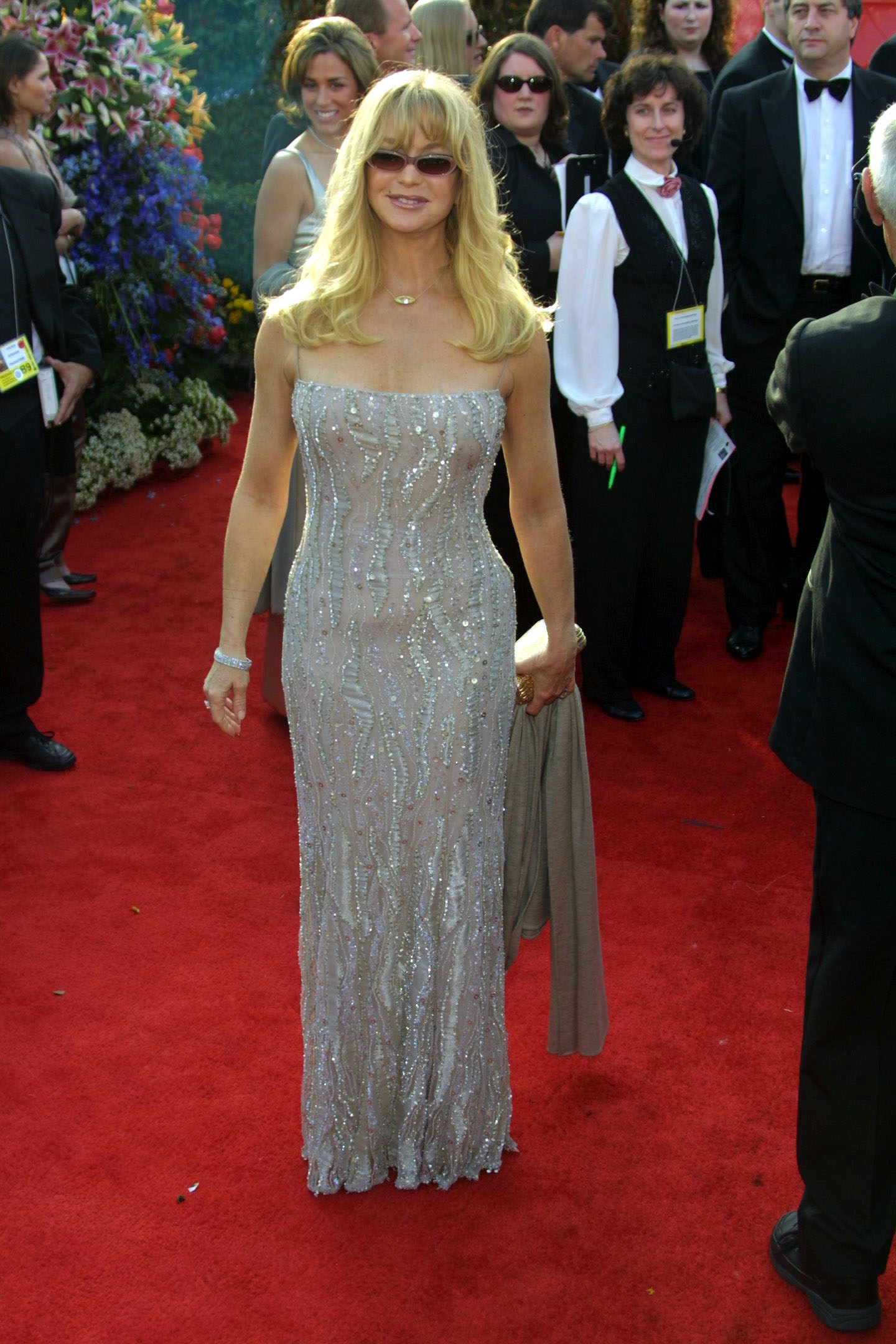 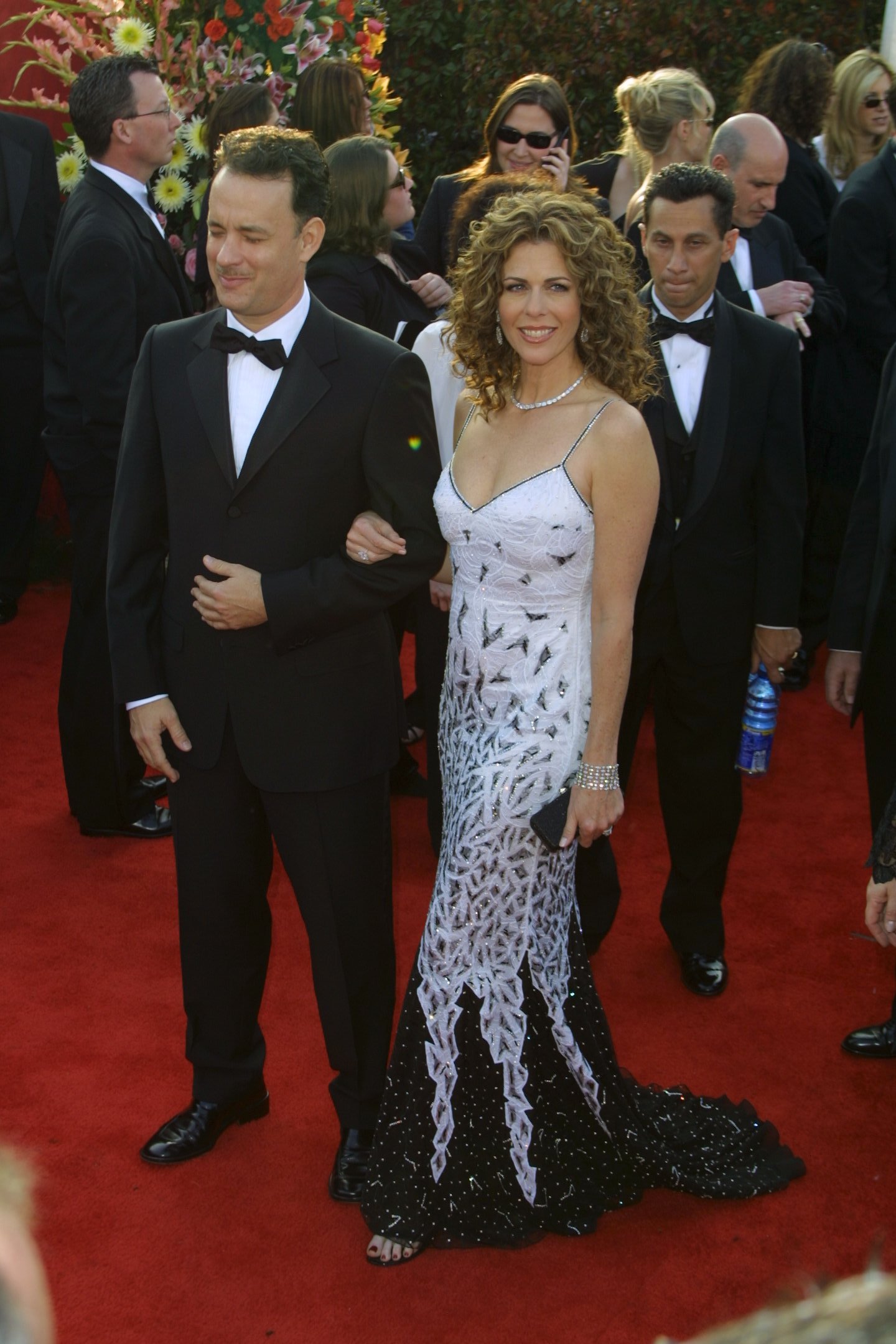 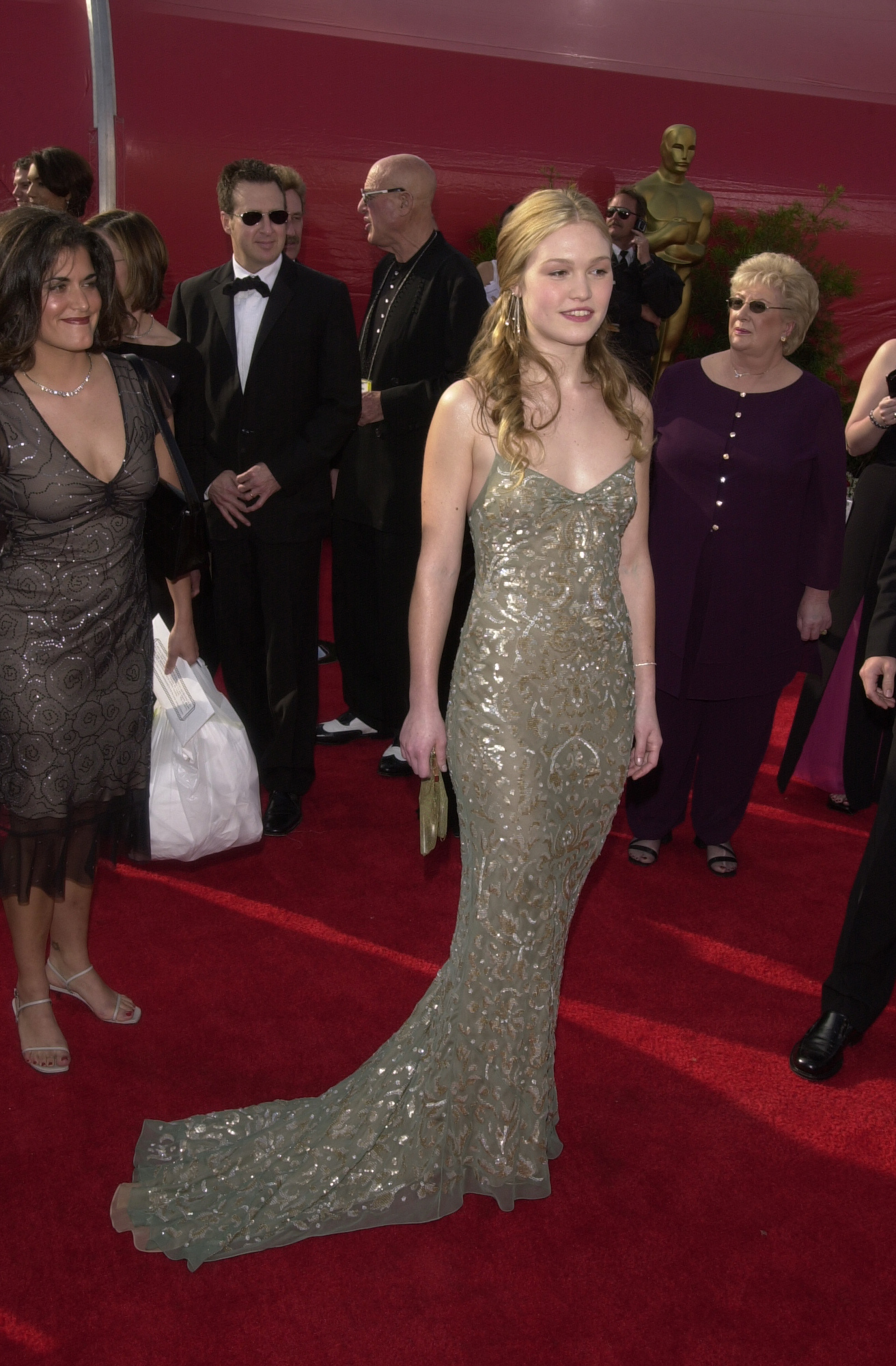 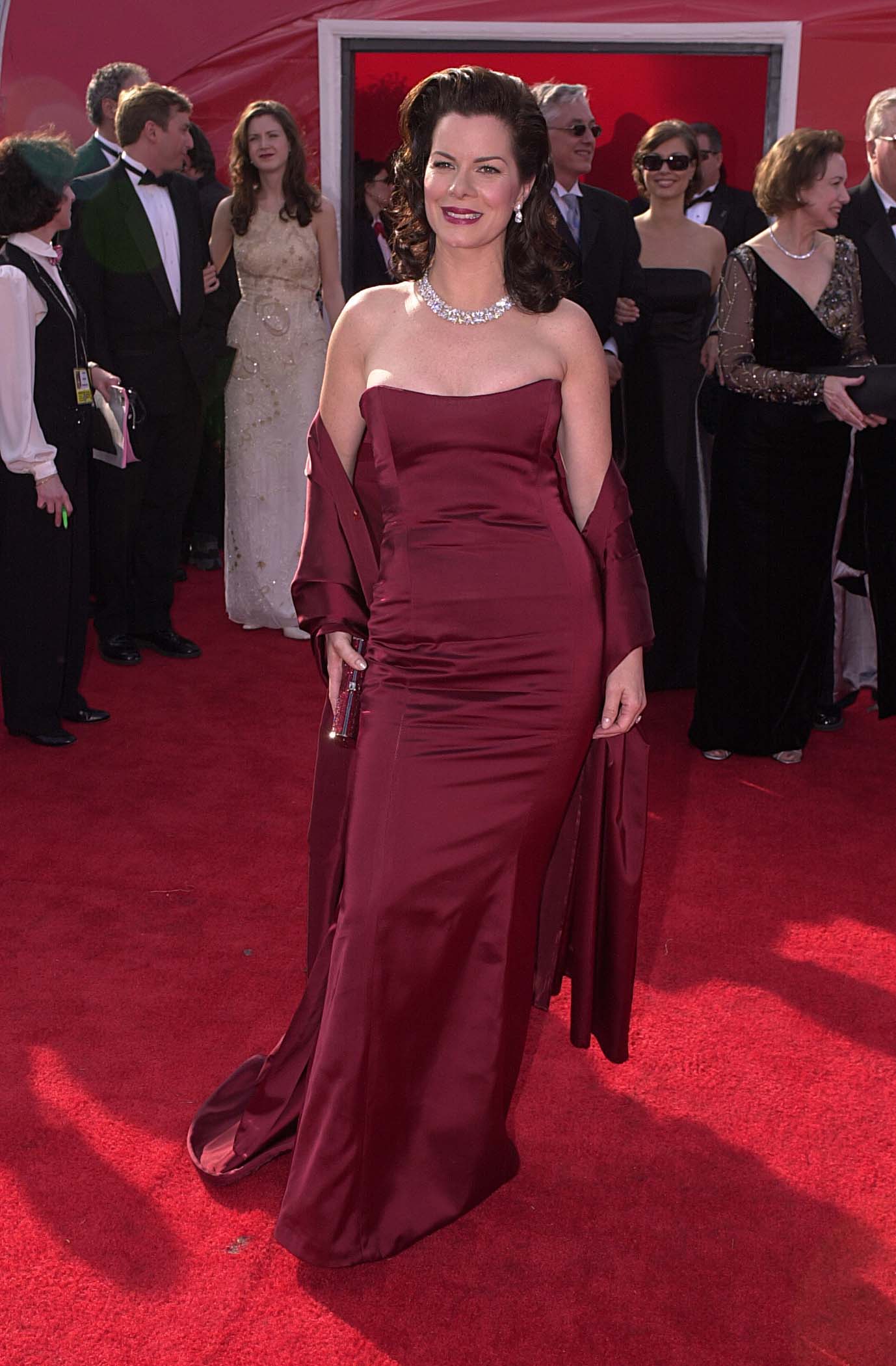 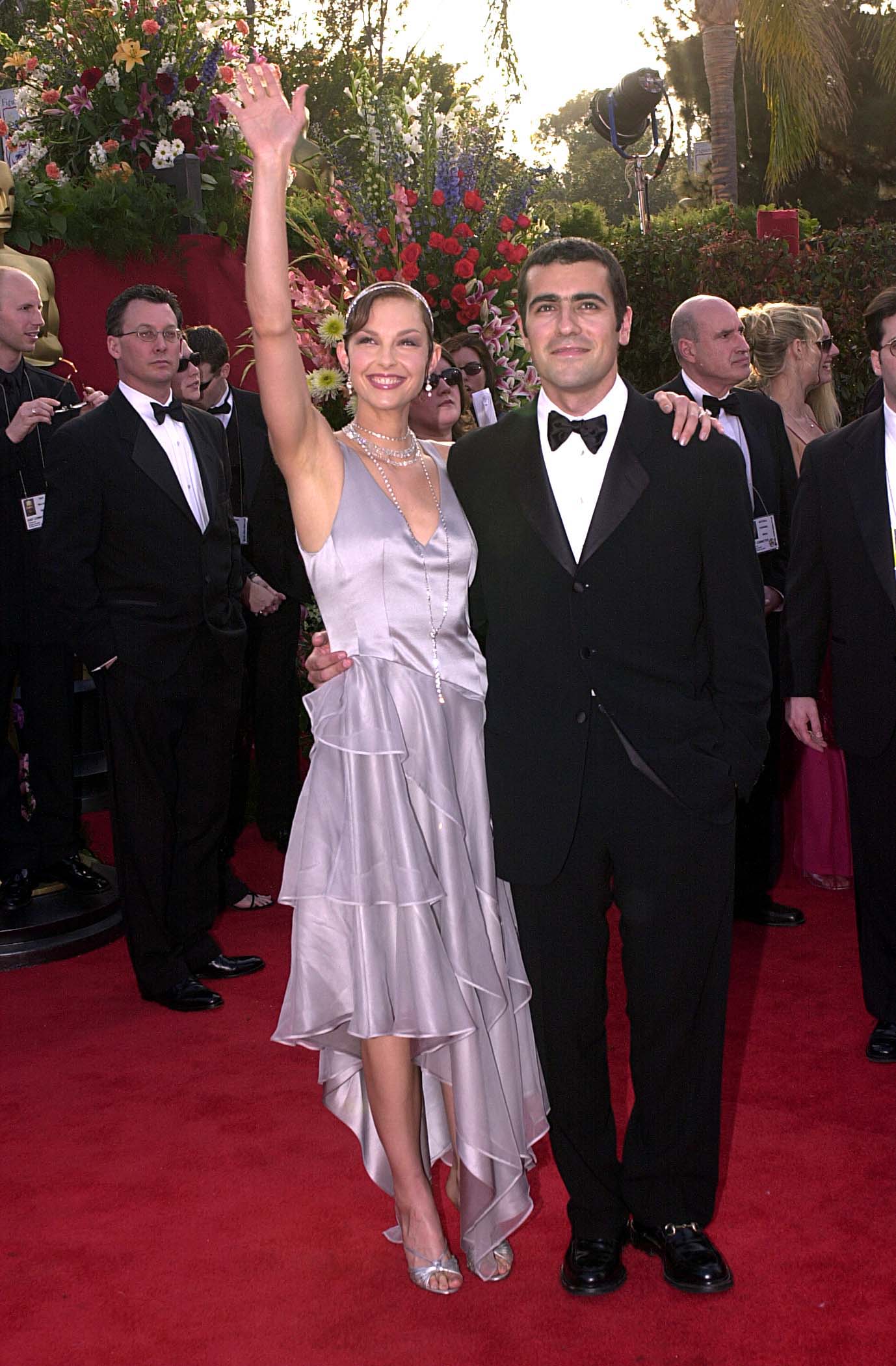 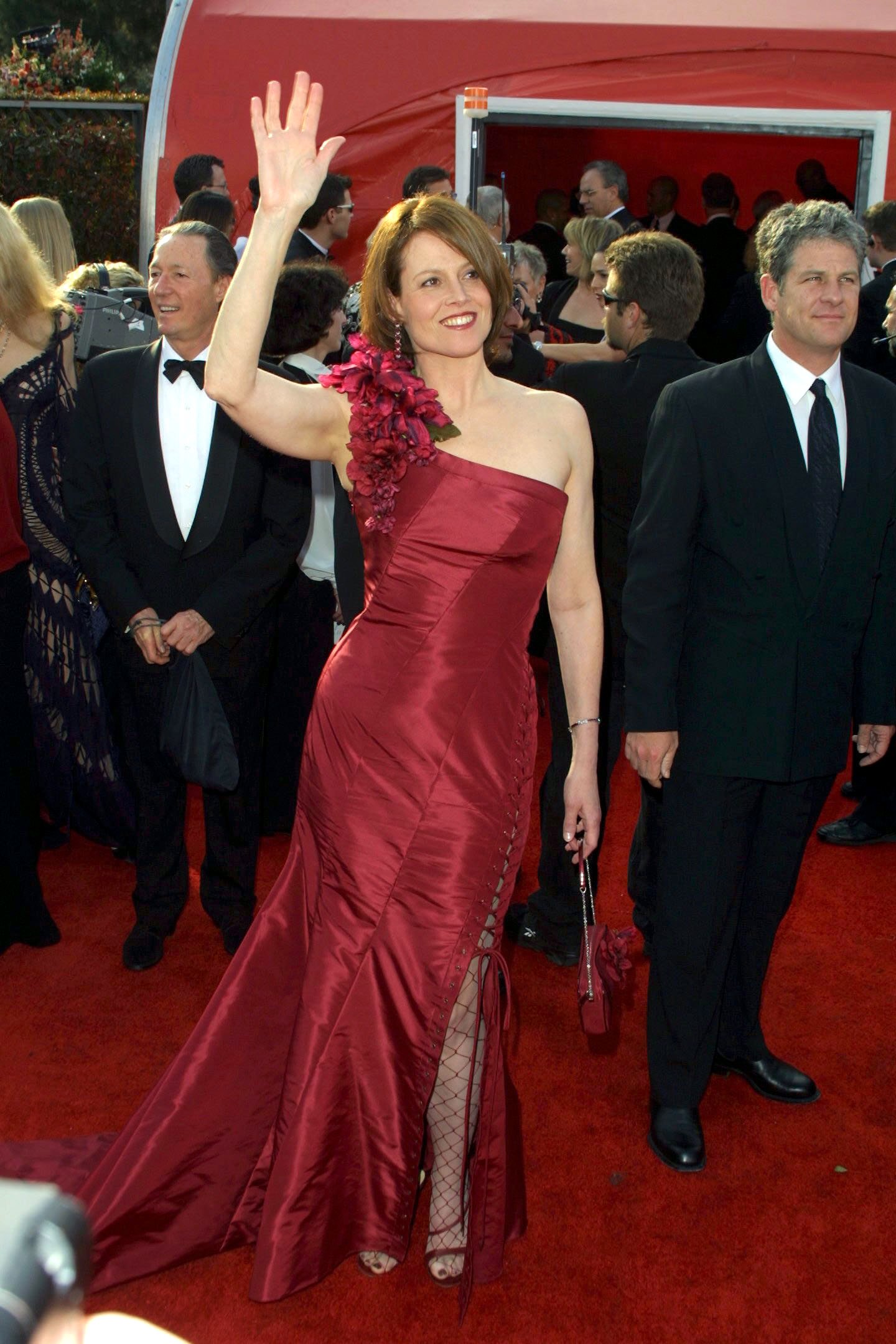 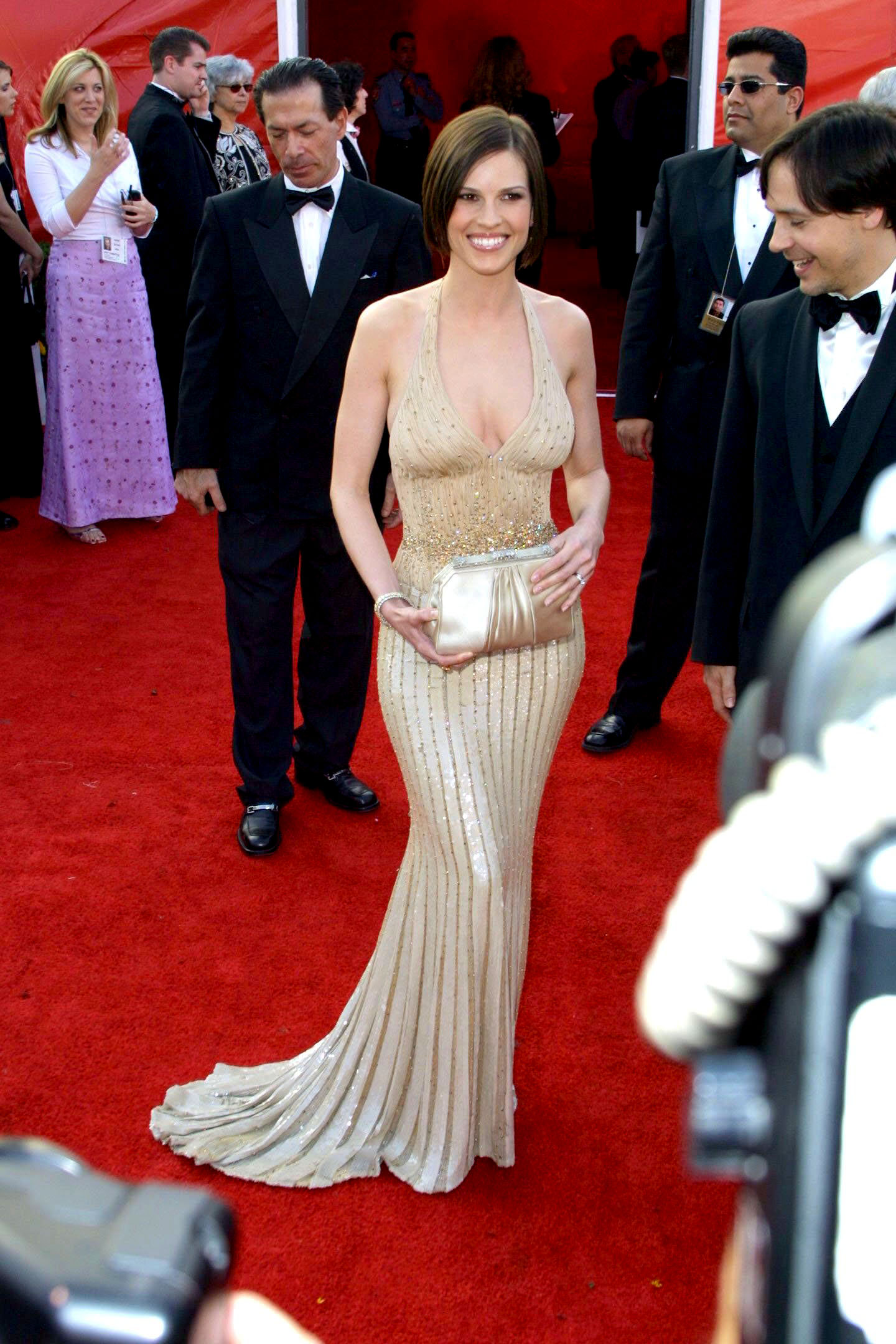 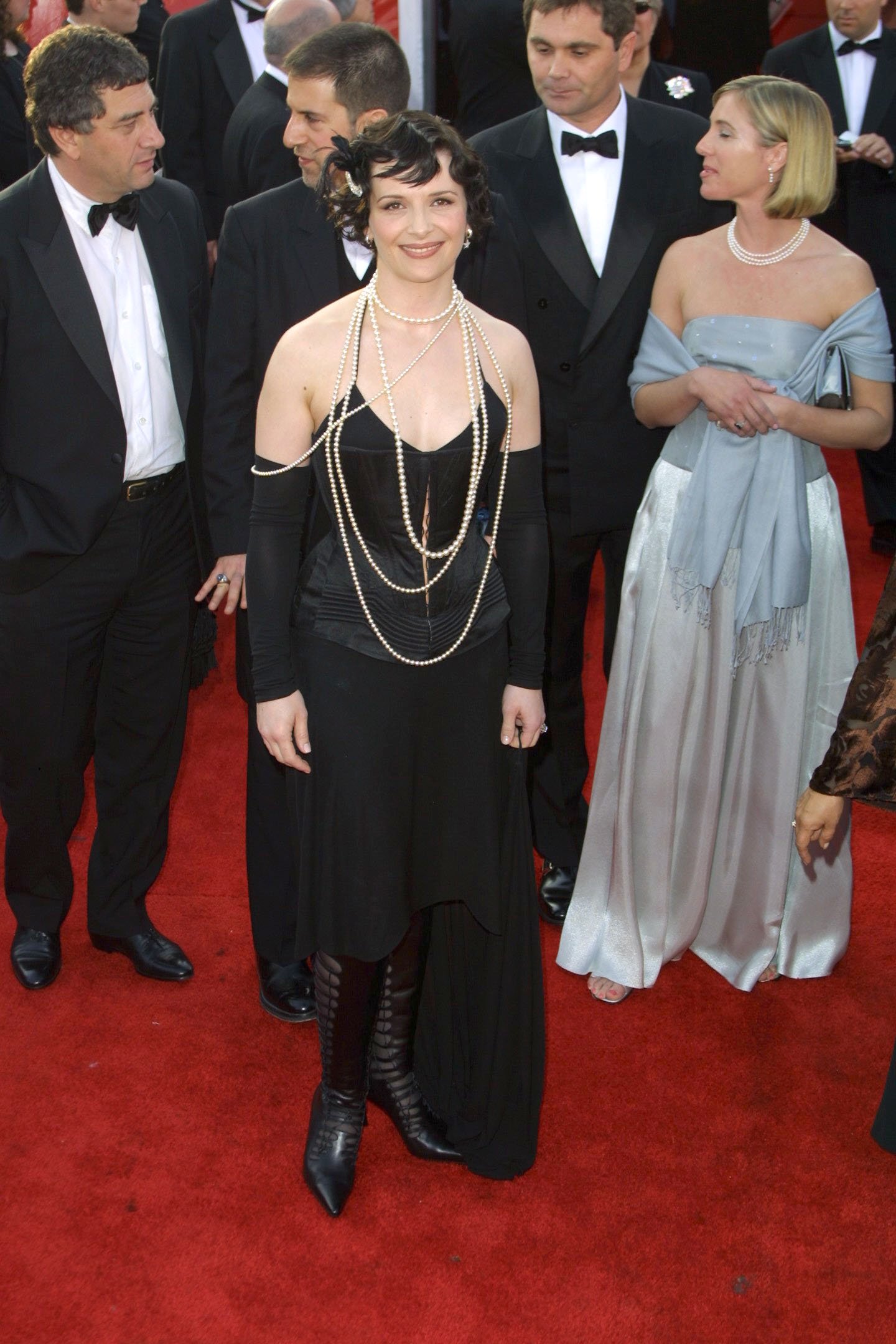 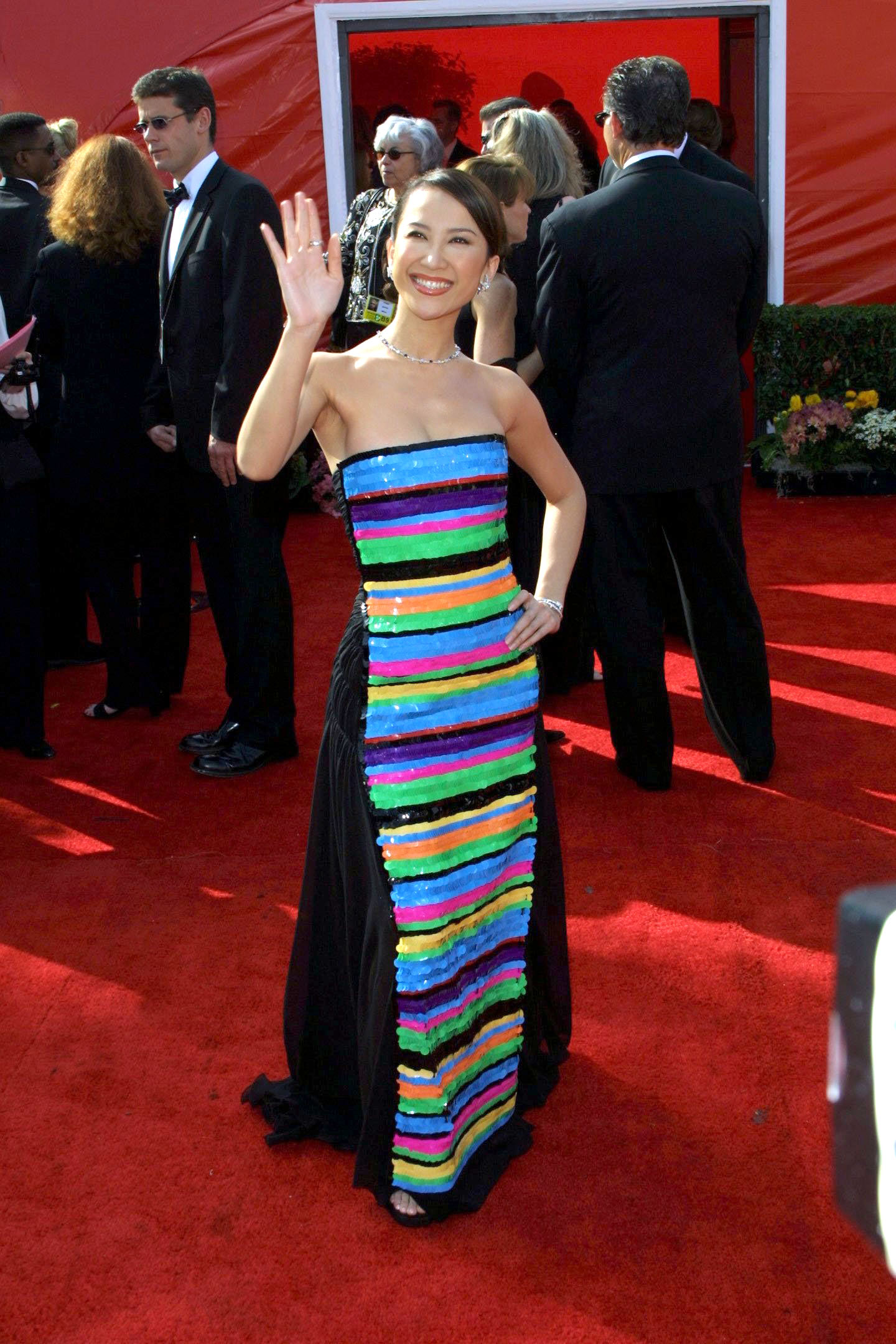 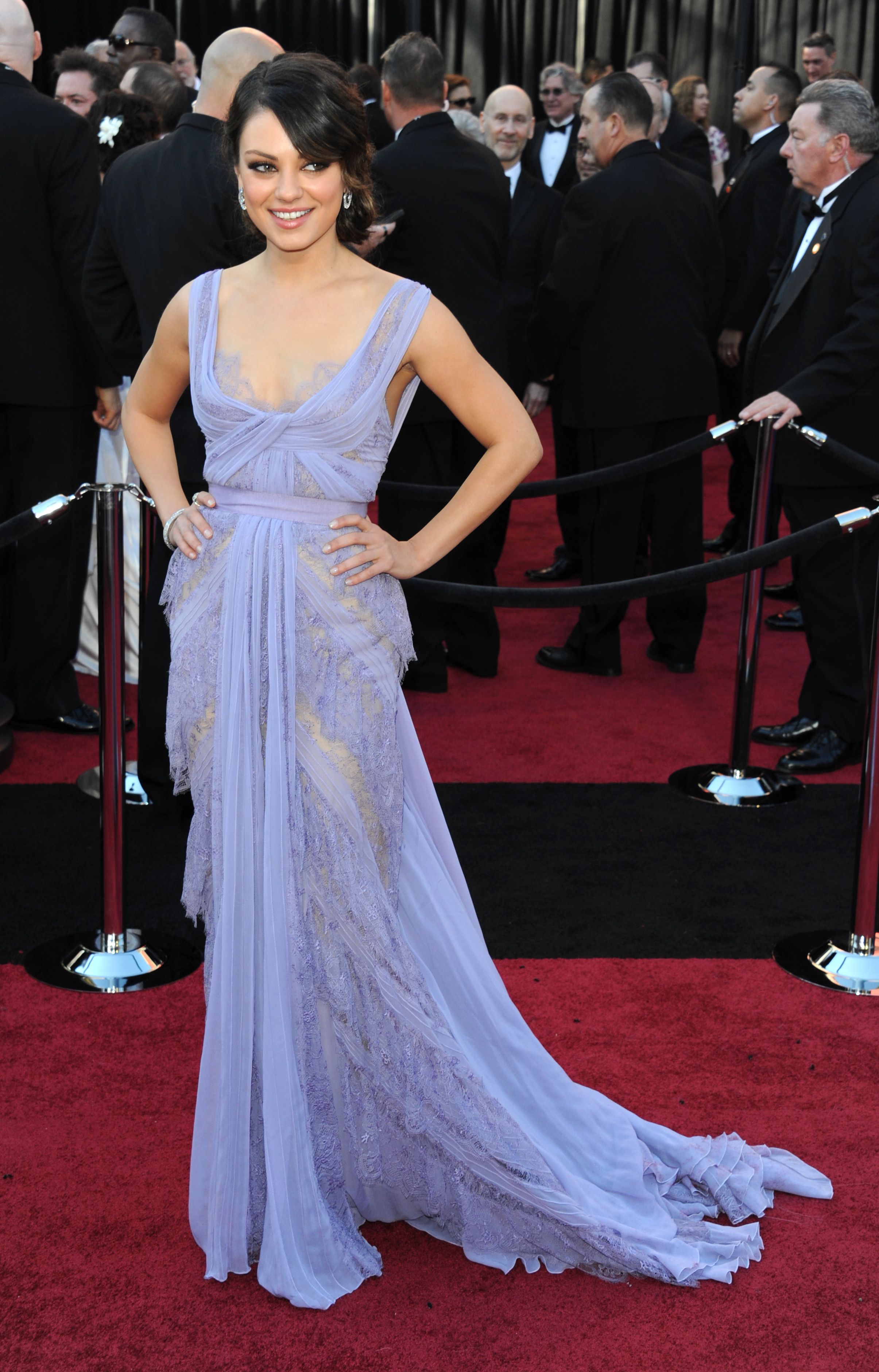