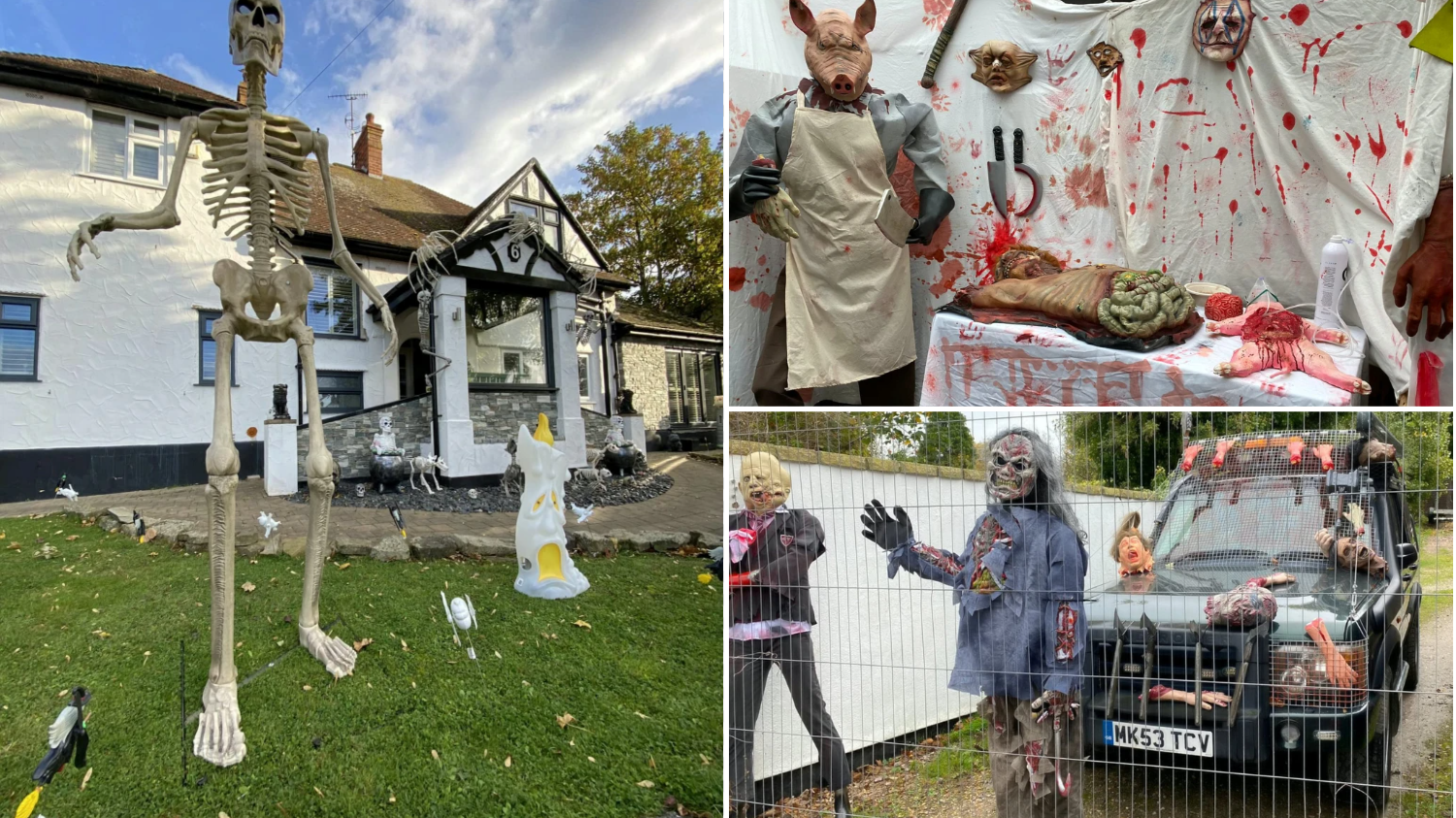 A family has thrown open their garden in North Wales this weekend for guests to come and see scary exhibitions for a charitable £1 donation.

Some of the sights include gruesome human dissection scenes, frightening clown displays and zombies attempting to break into vehicles.

The family first came up with the idea for this exhibit when 46-year-old Deb suffered a brain haemorrhage, resulting in her husband Graham giving up work to look after her.

As he was at home a lot more, this meant Graham had more time to build the scary displays.

Deb was keen on the idea of a Halloween exhibit, as she didn’t want her kids to go out trick or treating on their own.

She said: ‘We didn’t like the idea of it and didn’t want to let the children do trick or treating, so we brought Halloween to us, to our house.

‘There are not really many children around here, but we told people about it on Facebook, and more began coming.

‘Some of the props are from eight years ago, but we’ve spent an absolute fortune – it’s up in the thousands and thousands.’

Now the family host their annual ‘MooreScares’ event – but Deb wishes every piece of her display could be up all year round. Although, her neighbours aren’t so keen.

She says: ‘The neighbours across the road have gone on a cruise for a week so they’re away for it. They just don’t want the hassle.’

In terms of what guests should expect, they will arrive at the witches covern, then will head to a farm with scarecrows and man-eating plants.

She adds: ‘Then into the movie theatre, with Pennywise, Freddie Kruger, Chucky, Michael Myers, and the exorcist, which looks brilliant. She turns her head and says movie quotes.

‘We’ve also got Billy from “Saw” there, and he is electrocuting people and a Hannibal Lector model, based on a silicone mould of Anthony Hopkins’s face.’

Following this, visitors move onto the courtyard area, where they can enter a castle and even see a zombie apocalypse taking place.

On their journey, visitors will come face-to-face with animatronic werewolves and depraved scientists, as well as lifelike characters from films such as Saw, The Silence of the Lambs and Chucky.

Deb added: ‘We’ve actually built our own castle in the garden out of blocks, so it’s a permanent structure. It’s got an organ that plays itself.

‘Then you enter into the circus where all the clowns want you to work for them, with a 7ft jack in the box and a rocking clown called giggles.

‘There’s also the zombie containment area, where my husband put a metal fence post up with his Land Rover behind.

‘He’s put fake blood on it, body parts and we’ve got some zombies trying to get the driver, and we’ve got an air canon that goes “bang” which is the final scare.’

Deb first opened the exhibition to the public in 2019, with 2,000 people visiting over a three-day period.

She’s expecting a similar number to show up this year.