Home » Lifestyle » Developer fees adding up to $85,000 a block, driving up housing prices

Developers are paying up to $85,000 for every housing block they put on the market, with research showing the fees are driving up property prices and in some cases aren’t being used to develop local infrastructure for new homeowners as intended.

As housing affordability tumbles due to soaring prices across the nation’s major cities and regional areas, analysis from the National Housing Finance and Investment Corp suggests councils in NSW and Victoria are being so financially squeezed they are using developer contributions to protect their budgets. 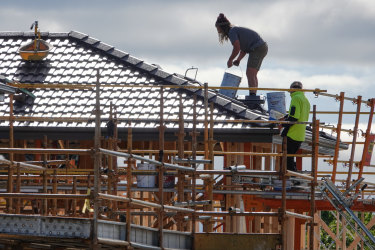 Developer fees are adding up to $85,000 to new house prices, with doubts they are going into essential local infrastructure.Credit:Paul Rovere

Most states and territories require contributions to “social infrastructure” around new housing developments, with roads, playgrounds, water, sewerage and drainage all partly paid for by developers.

It said developer fees could be “highly variable and unpredictable”, pushed up costs for developers and in some cases reduced new housing supply.

In many cases, the fees were being used to fund infrastructure such as schools and hospitals, which traditionally have been funded by state governments.

The increase in social infrastructure supposed to be funded by developer fees is now delivering fewer immediate benefits to new buyers, with the NHFIC finding the contributions were acting as a tax on housing.

“Developer contributions make up an increasingly substantial proportion of new housing costs, pay for a much broader array of social infrastructure that has typically been the domain of state budgets and can contribute to impeding new housing supply, damaging housing affordability for new home buyers,” he said.

The corporation found key reasons for councils’ growing dependence on developer fees were an aversion to debt and caps on rate increases. This had put pressure on councils to raise more fees from developers, even if it was undermining potential developments.

Developers did not support current contribution systems, wanting more transparency so they could make better informed and timely investment decisions while councils said they found it difficult to provide necessary infrastructure given demand and the pressure to balance their budgets.

The report followed the Housing Industry Association’s latest analysis of housing affordability, showing a 3.3 per cent drop in Sydney and a 3.8 per cent fall in Melbourne over the past year. In every other capital city, affordability fell by between 5.5 per cent and 18.7 per cent while in regional areas it dropped by 12.5 per cent.

The deterioration in affordability has occurred during a period of record low interest rates but also record low growth in incomes.

The Federal Parliament’s tax and revenue committee is currently examining the contribution of tax and regulation to housing affordability and supply issues.