The multi-hyphenate mother of two is sharing her joy with the masses via her new KIN series, “Really, Truly, Maybe.” In it, the 39-year-old welcomes cameras into her family life, which includes a peek into her relationship with boyfriend of three years, French pop star Matt Pokora.

“It’s like apples and oranges,” Milian tells Page Six of the difference between Matt and her exes, which include Lil Wayne, Nick Cannon and ex-husband The-Dream, father of Milian’s 10-year-old daughter, Violet.

“There’s too many!” the R&B star joked of her famous former flames before detailing her connection with Pokora, with whom she shares 8-month-old son, Isaiah.

“It’s a completely different relationship,” Milian told us. “It’s built on a respect for our families, for each other, and on mutual support. Nothing between us is uneasy, and that’s what I think is so special. He can truly be himself and so can I.”

She went on to reiterate how much of a “support system” her partner is within their relationship, sharing that he’s often willing to catch unnecessary flights at ungodly hours in order to be a shoulder to lean on during long shoots. 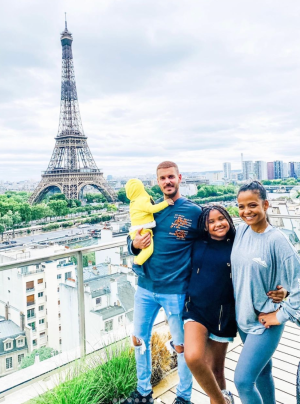 “It’s really nice to have that: someone who’s confident in himself and also dependable and can be selfless.”

When it comes to marriage, Milian is open to the idea of a second walk down the aisle. She isn’t, however, in a rush to make that happen.

“It’s not a big deal to me, I got to be honest with you,” Milian confessed. “Once you go through a divorce, you don’t look at marriage the same way. It loses some of its luster — if that makes sense — but it could happen! I wouldn’t mind it happening! It just isn’t something I’m pushing for, but I’m absolutely open to it.”

Viewers of the weekly YouTube series will not only get to see Milian with her adorable family, but will learn a thing or two from the budding lifestyle guru as cameras chronicle her attempts at everything from downsizing and decor to kitchen concoctions.

“The world has plenty of experts who can teach you how to make a perfect soufflé,” she asserts. “That ain’t Tina!”

Check out the debut episode of “Really, Truly, Maybe” above.