There were feathers, sequins and a near-wardrobe malfunction during a live cross to Sweden, but in the end it was Italy’s Måneskin, singing Zitti e Buoni, who flew the country’s tricolore flag past the finishing line to secure victory at the 2021 Eurovision Song Contest.

In a dramatic four-way finish between Italy, France, Switzerland and Malta, the television audience vote pushed Italy into an unassailable lead of 524 points, followed by France (499) and Switzerland (432), Iceland (378) in fourth place, Malta out of the race, and Ukraine (364) coming fifth. 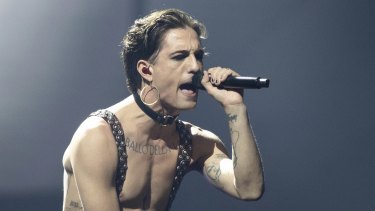 And it would not be Eurovision without one scandalous footnote: during the telecast a camera shot of the Italian delegation area seemed to capture Måneskin frontman Damiano David lifting his face from the table surface, prompting a rush on social media to suggest he was using a drug, and that he should be disqualified.

Asked about the incident after the telecast, David told the media what the camera captured was the aftermath of his bandmate Thomas Raggi breaking a glass. “I don’t use drugs, please guys,” David said. “Don’t say that, really. No cocaine, please, don’t say that.” The EBU has not made any official comment on the issue.

For the first time in six years Australia was not in the Eurovision grand final; singer-songwriter Montaigne, performing Technicolour, was excised in a tightly contested first semi-final last week, let down in part by the fact that she was unable to travel to the Netherlands and instead competed using a live-to-tape performance filmed in Sydney.

Due to COVID-19 restrictions, there was some uncertainty about how this year’s Eurovision would proceed; ultimately it was held on-site in Rotterdam, the Netherlands, with social distancing protocols. Only Australia and Iceland were physically absent; Iceland competed using rehearsal footage after a member of the group Daði og Gagnamagnið tested positive to COVID-19. 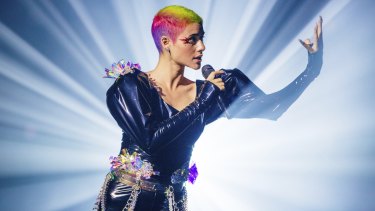 Despite that, the 2021 competition delivered the rich colour, texture and comical pageantry that makes Eurovision such a passion to those who follow it. That there is no rhyme or reason to Eurovision is not a criticism, nor exposure of a flaw in its process. Rather, it is the heart of the competition’s enduring appeal.

This is, after all, the stage that gave us ABBA’s Waterloo, Domenico Modugno’s Nel Blu Dipinto Di Blu – better known as Volare – and Gina G’s Ooh Aah Just a Little Bit. It also gave us Finland’s Hard Rock Hallelujah (which won) and Sweden’s Diggi-Loo Diggi-Ley, and the Dutch masterpiece Ding-a-Dong (which did not).

And in a nod to Eurovision’s history of camp, there was Norway’s winged pimp-a-like Tix singing Fallen Angel and Spain’s Mills & Boon cover-boy Blas Cantó (Voy a Quedarme), and a show-stopping performance from Cyprus’s Elena Tsagrinou (El Diablo), whose look and sound, if nothing else, would surely have made Lady Gaga’s lawyers turn their heads. 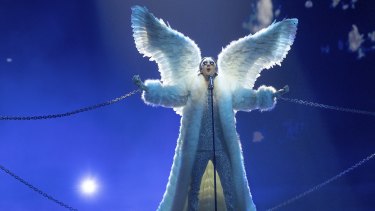 This year was Australia’s sixth year in the iconic competition. Despite the eye-rolling and hand-wringing of Eurovision traditionalists, participation in the contest is not predicated on European geography but rather membership in its organising body, the European Broadcasting Union (EBU). Australia qualifies on the basis of SBS’s associate membership of the EBU.

Australia also has a long-standing cultural connection to Eurovision: Australian-born Johnny Logan won twice representing Ireland in 1980 and 1987, and wrote the winning song in 1992, singers Olivia Newton-John and Gina G represented the UK in 1974 and 1996 respectively, and in 2017 singer Anja Nissen represented Denmark.

For four of our six years in the competition, Australia has placed in the top 10 on a form of more than 40 countries. Isaiah Firebrace (2017) and Kate Miller-Heidke (2019) finished ninth, Guy Sebastian (2015) finished fifth and Dami Im (2016) delivered our strongest performance, finishing in second place.

Like most “global” television events, Eurovision’s total audience is the subject of some conjecture, calculated off audience estimates and some guesswork. The officially quoted figure is approximately 180 million viewers. 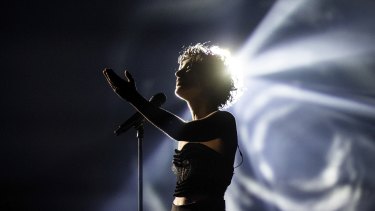 In the competition, the 20 countries which survive two semi-final rounds progress to the grand final where they meet the host country, this year the Netherlands, and the so-called “big five” who automatically get final slots: France, Germany, Italy, Spain and the UK. Each country’s final score is calculated by merging scores from a five-member professional jury and audience “televoting” during the live broadcast.

Each country can award other countries one through eight, ten and twelve points – “douze points” in the competition’s lingua franca, French – and the country with the most points wins. Gift with purchase: they also get to foot the bill for the following year’s competition as its host country.

Eurovision’s slow scoring process, a sort of musical version of the Brownlow Medal count in which the hosts cross to each country individually, has historically been the subject of much derision. But after a year in which most of the world was forced to communicate via Zoom, perhaps we have a new perspective on it. 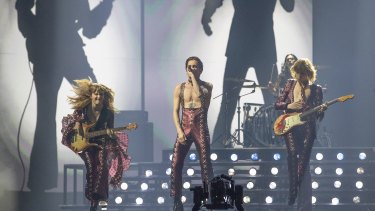 Due to Italy’s win, the 2022 competition will be likely held in Rome, though there is usually a delay before a host country formally confirms the city which will host the event.

Australia’s participation is almost certain; although associate members of the EBU generally require an invitation to participate in Eurovision, Australia was given a five-year invitation in 2019, ensuring its eligibility until at least 2023.

The Eurovision Grand Final airs Sunday, May 23, at 7.30pm AEST on SBS.