‘She may be doing it on purpose to annoy me!’ Bride-to-be says her future mother-in-law plans to wear a cream-colored outfit and BRIDAL accessories to her wedding after they ‘fell out’

A bride-to-be has claimed her future mother-in-law plans to wear a cream-colored outfit and bridal accessories to her wedding — and she suspects the older woman may even be doing it on purpose to hurt her.

The bride, who goes by the username PinkSlide1 on the forum Mumset, asked fellow Mumset users how she should handle the situation.

She explained that she and her mother-in-law-to-be recently had an argument, and now the other woman has purchased a white top, jacket, shoes, and bag to wear to her son’s upcoming nuptials. 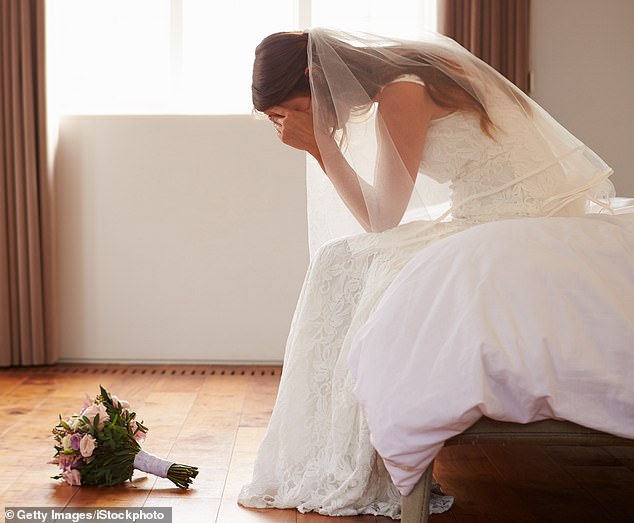 Mad: A bride-to-be has claimed her future mother-in-law plans to wear a cream-colored dress and bridal accessories to her wedding out of spite, leaving the woman extremely upset (stock)

‘[My fiance and I] are getting married soon. And just as the title suggests my soon to be MIL is wearing a cream top and jacket and a pale grey skirt!

‘Went round yesterday and she shows me these white bridal shoes and white satin bag,’ she added. ‘[Am I being unreasonable] for being slightly miffed at this? We had a very recent fall out so she may have done it on purpose to annoy me!’

The bride-to-be later added more information about her relationship with her future mother-in-law, especially as of late.

Most commenters thought the bride-to-be should not be bothered by the cream-colored ensemble or let her mother-in-law know she is upset about the decision.

‘If she is trying to make a fool of you all that’s going to happen is she’s going to make a massive fool of herself,’ one person wrote. ‘Let her go ahead. Just smile — and on no account let her know she’s got to you!’

A majority of people also thought it was not a big deal considering most guests at the wedding would be able to figure out who the bride was out of everyone in attendance.

‘I really wouldn’t worry,’ another commenter advised. ‘Surely everyone knows who the bride is! Who cares if she’s wearing cream?’

The comments section appeared to be mostly in agreement that the color of the dress and other accessories should not be a huge deal to the bride.

People thought the best way to stick it to the future mother-in-law, if she was attempting to rile up the bride, was to simply act like she didn’t care.

But one commenter, a former bride, confessed she dealt with a similar situation at her own wedding from her mother-in-law.

The former bride wrote: ‘My MIL wore a longish cream dress and hat. I’m certain she did it on purpose as we didn’t get on very well. I had the last laugh because everyone was talking about her behind her back and saying how disrespectful her outfit was.’

After receiving lots of advice about how to handle the situation, the bride-to-be thanked everyone for their helpful comments.

‘Thanks all for all your advice to ignore it, it is the right thing to do,’ she wrote. ‘Had a conversation about it with two of my bridesmaids and they went mad saying I should say something. Obviously it isn’t worth it. But they know how patient I am ignoring her about a lot of the things shes done throughout or relationship.’

Commenters thought she made the right decision to not allow the future mother-in-law upset the bride over something as simple as an outfit.