Home » Lifestyle » Booting Djokovic will now be messy, but it needs to happen

Booting Novak Djokovic out of the country is the only decision a serious government can make.

The Morrison government deserves plenty of criticism for what has been a needlessly messy and drawn out process, with MPs now growing increasingly frustrated at the time it is taking for Immigration Minister Alex Hawke to make a decision. 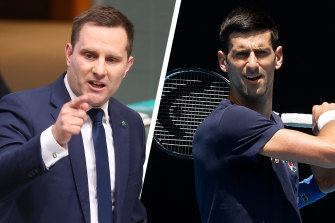 But the minister is right to take his time. If he does deport Djokovic, the one major avenue for appeal will be if the tennis star’s lawyers can prove he didn’t properly consider the information before him.

The government has now maintained for more than a week that an unvaccinated person with prior infection of COVID-19 in the past six months does not qualify as an exemption to enter Australia quarantine-free.

Czech tennis player Renata Voráčová was last weekend deported from the country on this basis.

Therefore, it would be utterly absurd to let Djokovic stay.

A decision not to cancel his visa will be more of a political decision than the judgment to do so. It would be a government looking to cut its losses and move on, rather than one enforcing its own rules.

Commentators arguing that there are no practical public health grounds for deporting Djokovic when Australia is no longer suppressing the virus in the wake of the Omicron variant miss the point. The rules at the international border either apply to the world’s best tennis player, or they don’t. And if they don’t, they would be a joke.

An argument about whether the rules are the right ones at this stage of the pandemic is a separate debate.

While Australian public opinion may have shifted immediately after Monday’s court case, it appeared to turn back against Djokovic on Wednesday as his errors and inconsistencies became glaringly obvious. His admissions that he took part in a media interview and photo shoot while knowingly COVID-19 positive, and that his agent incorrectly filled out his travel forms, were the last straw for many.

There was also, at least initially, some misunderstanding about what the court case meant. There was no “judgment” or “decision” by the court; there were court orders agreed to by both parties once the Commonwealth realised that a Border Force official had messed up by not affording Djokovic enough time to get a lawyer at the airport.

Politically, Prime Minister Scott Morrison can still get a win out of this if the government does cancel Djokovic’s visa. Some of the Prime Minister’s base may be against vaccine mandates, but he needs to win back those in the middle ground who he has lost since the early stages of the pandemic.

Mr Morrison could draw a link between this decision and the actions he took in early 2020 to shut off the nation’s borders, which probably saved thousands of lives.

Undoubtedly, Morrison and the Australian Border Force should be criticised for allowing the Serbian tennis star to ever get on a plane.

While there is no basis for slamming them over Djokovic’s visa approval – visa approvals have nothing to do with establishing vaccine status at the border – alarm bells should have rung weeks ago that Djokovic was looking to come. They also should have never let in another player and official who were also unvaccinated, which probably gave Tennis Australia a false sense of security that the world no. 1 would be given the green light.

Tennis Australia will likely come off with its reputation severely tarnished and its draw thrown into chaos, after being warned by the federal government on multiple occasions in November that people in Djokovic’s position would not be allowed in.

And let’s not forget the Victorian government helped set up this whole process with Tennis Australia by creating the medical panels that cleared Djokovic to come. The Andrews government deftly fed Djokovic to the wolves once he arrived in the country, allowing the Commonwealth to take the heat once it made a mess of the situation.

But ultimately, the most criticism should be reserved for Djokovic – an anti-vaxxer who brazenly breached isolation requirements in his own country less than a day after receiving a positive test result.

He should have never been allowed in, but that doesn’t mean he has to stay.