Donald Trump may have expressed support for Boris Johnson in the Conservative leadership contest, but it seems Jeremy Hunt is the candidate who had his attention today.

The Foreign Secretary was among the first to meet with the President as he landed on the tarmac at Stansted Airport this morning ahead of a three day state visit.

She pointed to the President’s ‘relaxed smile’ and ‘relatively intimate’ handshake which she suggests indicate a certain level of friendship and respect between the two politicians. 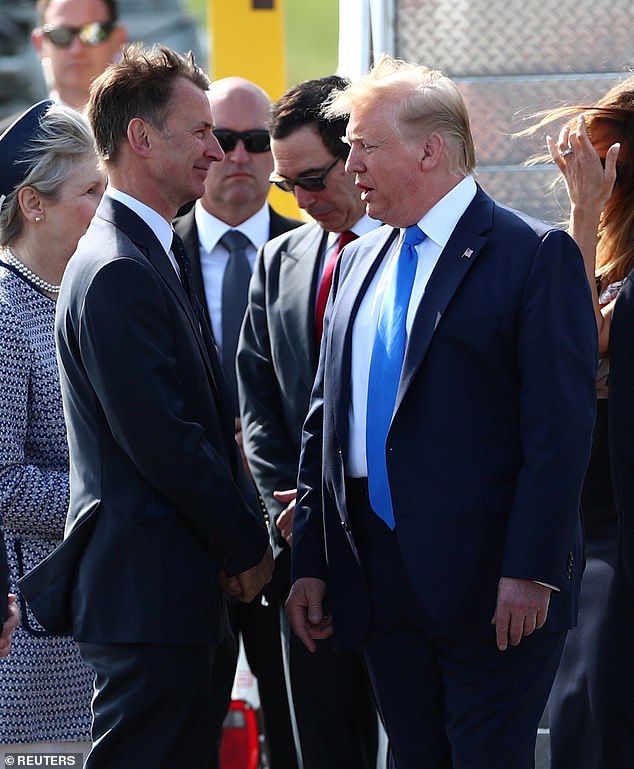 Donald Trump and Jeremy Hunt looked ‘friendly’ according to body language expert Judi James, who suggested that the President had singled Hunt out as ‘worthy’ of attention and respect 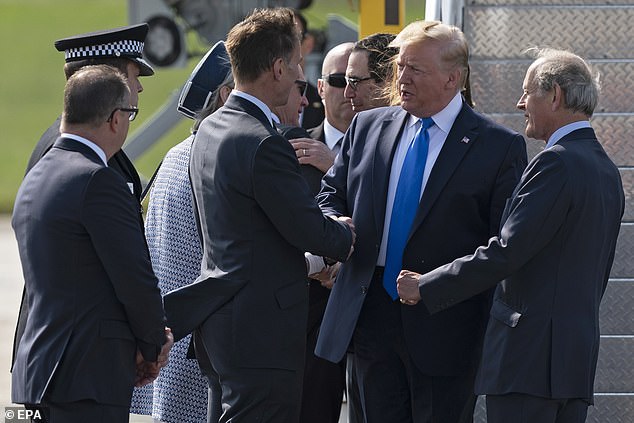 Jeremy Hunt was waiting for the President at Stansted and revealed Mr Trump talked to him about Sadiq Khan as he got off the plane.

The Foreign Secretary said: ‘Let’s just say he [Mr Khan] won’t be getting an invite to the White House any time soon’.

The US President is in the UK for three days where the Queen will throw a state banquet at Buckingham Palace in his honour tonight after he meets Her Majesty for lunch and Prince Charles and his wife Camilla for tea.

When asked about Hunt in an interview with The Sun last week, Trump replied: ‘Yup. Like him.’ 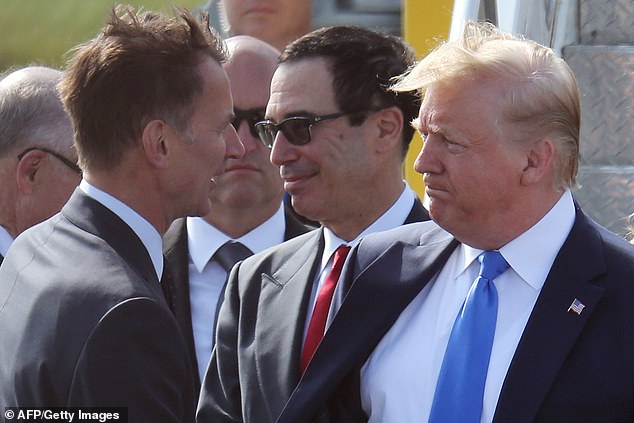 And today the conversation appeared ‘friendly’ between the two men according to body language expert Judi James.

She explained:’Trump’s frown and rather stern-looking facial expression did convert to a slightly more relaxed smile as he engaged in a chat with Jeremy Hunt.’

She went on: ‘Trump might have endorsed Boris for the next PM but Hunt used some subtle-looking choreography to send out some visual messages’ that he might have the President’s attention on this trip.

Judi pointed to the pair’s handshake as an indicator of this, suggesting the position of their hands reflected an ‘intimacy’ between the pair. 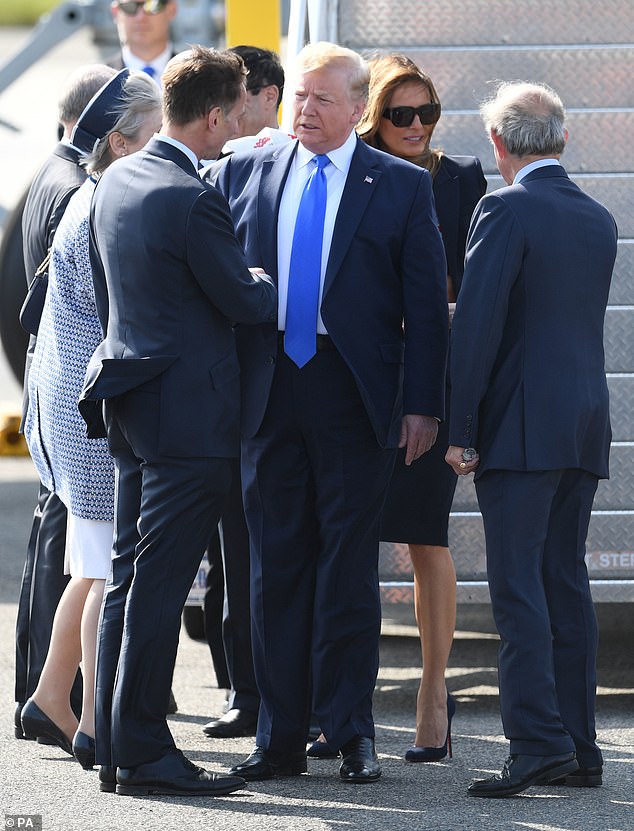 She explained: ‘As the pair performed their greeting ritual with hands held at upper waist high the proximity looked relatively intimate.’

She went on: ‘Trump’s four power-pats of Hunt’s bicep did look friendly but also faintly lowering in terms of status. But then Hunt instigated a second shake that was as physically close and therefore flattering in terms of presidential attention as the first.’

The body language expert suggested that the interaction was a clear suggestion that Trump has ‘recognised and picked Hunt out’ on arrival, and that the President believes he is ‘worthy of some in-depth attention and conversation’.

Mr Trump arrived on Air Force One at Stansted Airport, waving as he walked down the steps from the front of the jet, accompanied by the First Lady who wore a blue pencil skirt and blazer, dark sunglasses and heels. 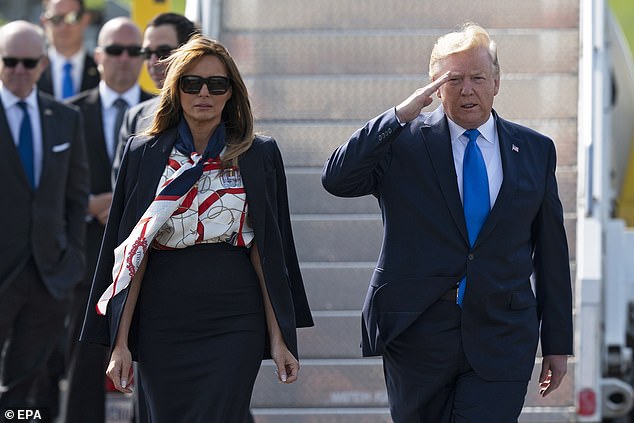 An array of US military helicopters arrived around an hour ahead of the President’s white and blue plane, which bears the US flag on the tail fin and the words United States of America.

There was a visible armed police presence around the airport and police vehicles parked alongside the runway.

Today the US President and First Lady Melania will first head to Buckingham Palace for lunch with the Queen – and will return this evening for the state banquet, which is being boycotted by Labour leader Jeremy Corbyn. In between they will visit Westminster Abbey and also go for tea with Prince Charles at Clarence House.

Prince Harry will also attend the private lunch at the palace – although his wife Meghan Markle, who is on maternity leave, will be at home with their four-week-old son, Archie. 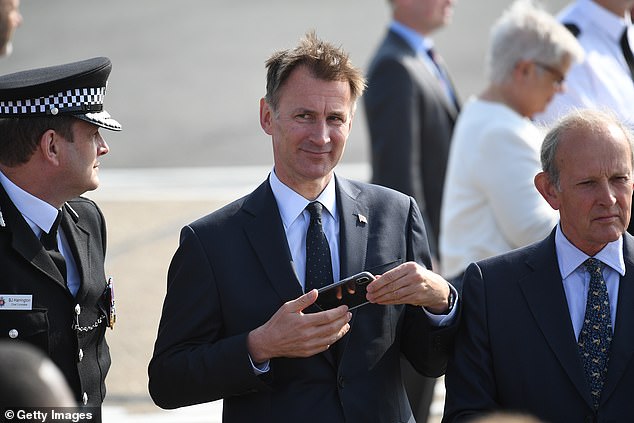 Jeremy Hunt was one of the first to greet the president ahead of his three day visits, which is expected to draw protests in London 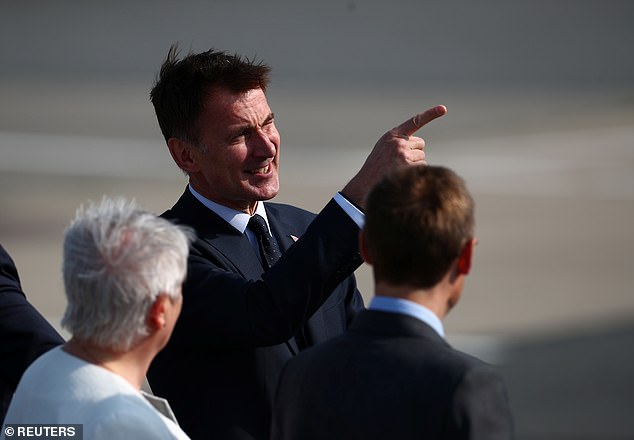 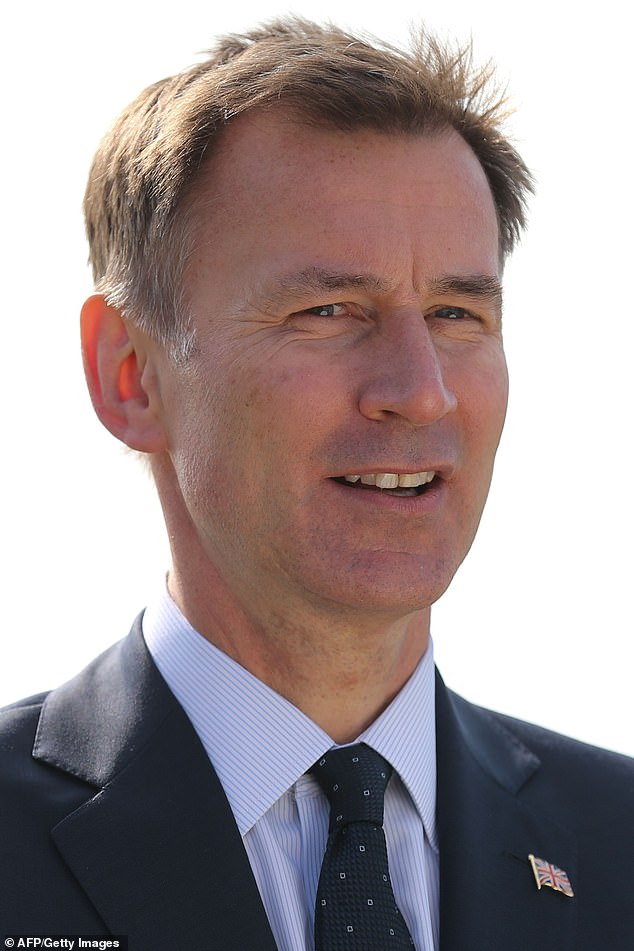 His visit will be met by large protests with hundreds of thousands of people set to hit the streets and Mayor Khan agreeing to let agitators fly two blimps lampooning Mr Trump: One showing his as a 20ft baby and the other as a robot in a gold toilet.

The President had already wasted no time in spelling out his views on the special relationship, backing a No Deal Brexit while praising Boris Johnson and Nigel Farage and calling for the Brexit Party leader to be sent to Brussels to re-negotiate the deal that cost Theresa May her job.

Jacob Rees-Mogg was the first to react to Trump calling Khan a ‘stone cold loser’ and said: ‘I think it’s perfectly reasonable of the President of the United States. I think that Mr Khan demeans the office and demeans the nation. I am backing Mr Trump in this row’.