It looks like we won’t have Alec Baldwin as Donald Trump to kick around anymore.

The actor, who has been grumbling about the role for a while now, announced in an interview with USA Today Thursday that he is “so done” playing the president he reviles on “Saturday Night Live.”

“I can’t imagine I would do it again. I just can’t,” he said. “I feel like I’m done with that now. I’m so done with that. They should find somebody who wants to do it.” 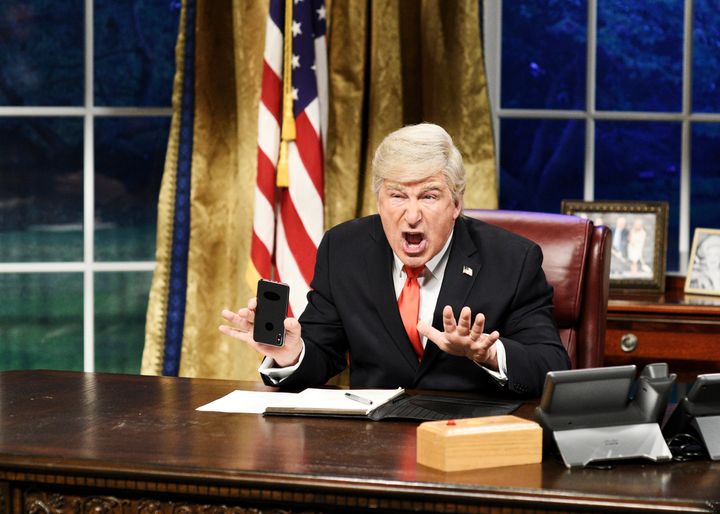 Baldwin, who won an Emmy for the role in 2017, said he has loved working with the “SNL” cast and was excited about being Trump’s doppelganger in 2016 and the following year. But he believes the schtick has “lost some of its freshness.”

The host of “Match Game” and father of five (four of them under the age of 6) said he wants to spend as much time as possible with his famlly.

“‘SNL’ just crushes my weekends,” he said. “And now weekends are going to become much more precious to me because that’s time with my kids.”

“Saturday Night Live” fans may be salivating over the thought of uber-chameleon and program alum Kate McKinnon in the role. But Baldwin recommended Anthony Atamanuik, who played a parody of Trump on Comedy Central’s “The President Show.”

Baldwin also pitched Darrell Hammond, formerly of “SNL,” who used to play Trump on the show during “The Apprentice” years. (Trump was so infuriated by Baldwin’s mocking portrayal of him that he pleaded on Twitter last year for Hammond to take over the role.)

Beginning Friday, Baldwin can be seen in “Framing John DeLorean,” a documentary about the carmaker’s arrest on drug-trafficking charges. Baldwin is playing DeLorean in re-enacted scenes.