Labor leader Anthony Albanese will promise to take the country towards full employment if he wins the next election in a pitch to workers that accuses the federal government of failing to invest in the next generation.

Mr Albanese will commit to launching a white paper on full employment as a priority under a Labor government, setting up a contrast with Prime Minister Scott Morrison over the outlook for jobs in the recovery from the coronavirus pandemic. 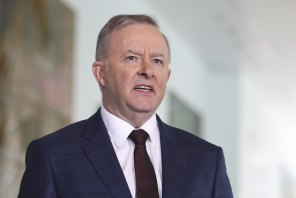 Anthony Albanese’s plan aims to tap into frustration among people who cannot find work or get enough hours to boost their salaries.Credit:Alex Ellinghausen

“Let’s be clear – we need to get through this. And we need to look ahead. It’s not good enough to snap back to 2019,” he says in the draft of a speech to be delivered on Friday.

“They knew national leadership in times of crisis was about more than mere preservation, it was a question of vision, of courage,” Mr Albanese says in the draft of the speech to the National Press Club.

“The courage to imagine greater opportunity for all in peace, the leadership to begin that work even in the midst of war.”

He will say this helped transform the post-war environment, setting up a boom that spanned two decades during which Australia’s previously double-digit unemployment rate sat at about 2 per cent.

“The white paper was progressive. It welcomed technological changes that would boost productivity, rejected the idea of make-work jobs, and talked about the importance of work for dignity. It is an energy that I am proud to say drives me.”

While Treasurer Josh Frydenberg sees the economic recovery as a strong suit for the government going into the next election, the Labor plan aims to tap into frustration among people who cannot find work or get enough hours to boost their salaries.

“Today the headline figures mask the tough reality that 1.7 million Australians are looking for work or more hours to support themselves and their families and 4 million are in insecure work,” Mr Albanese says.

“There is no consensus on what full employment is. The point I’m making is that we need to think of the labour market more broadly than just the monthly figures.”

The Labor leader does not set out the terms of reference for his inquiry, saying instead the details would come after the election in the event he wins.

“It will take in the changing nature of the workforce, not least the rapid expansion of the care economy, including aged care, child care and disability care,” he says.

“It needs to consider how employment opportunities can be taken up by those currently on the disability support pension.

“And it will seize on the growing importance of jobs being driven by renewable energy.”

Mr Albanese will say full employment is about secure work, which will assist those currently in work through driving up wages.

“It will cut the gender pay gap and narrow the chasms that divide Indigenous and non-Indigenous Australia. We cannot afford to aim low.”