Home » Lifestyle » Adam Gilchrist on the T20 World Cup: I still love going to the cricket

Adam Gilchrist is one of Australia’s greatest-ever cricketers. A three-time World Cup winner himself, he is currently commentating for Fox Sports on the Twenty20 World Cup. 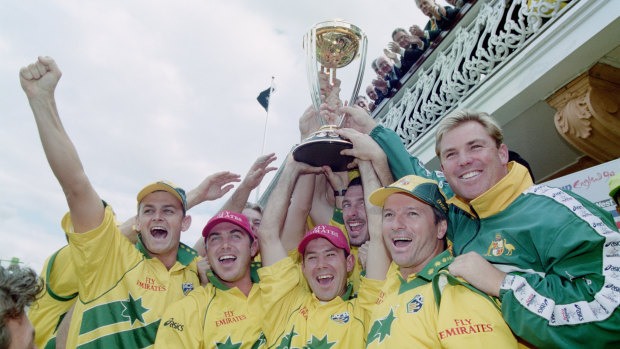 You’ve seen a lot of World Cups – quite a few from the inside. How does the current one stack up, in terms of entertainment value?

Oh, look, obviously there’s been some frustrations with the weather, but putting that aside, there’s been some extraordinary results, and I think that the big indicator out of this particular tournament is showing just what positive effect the T20 format has had on the cricketing landscape in bringing the lesser-known nations closer to being competitive and indeed beating on some occasions the more established cricketing nations. Right from game one, Namibia beating Sri Lanka, and obviously the West Indies getting knocked over, Ireland beating England. It’s proven to be unpredictable and creates a great deal of interest, I think.

The doubters, or the purists who like to discount Twenty20 cricket, have probably said in the past that it’s a very disposable form, that it won’t create the memorable moments that longer forms do. Do you think that perception is changing now?

I think so. It’s tough to imagine some people ever warming to it, but my only advice is don’t try to compare the formats. Because they’re totally different, but still [proper cricket] at their foundations – that’s what’s made T20 a likeable, well-received, popular format, that it’s legitimate cricket. It’s not compromised by numbers, players on the field, or having wildcards where if you get out you get a second chance, or anything gimmicky like that. I’m sure the traditionalists will say there’s a lot of gimmicks in there, but really it’s just an absolute condensed version of proper cricket as we’ve always known it. And by virtue of that, it’s just compacting the action and making it more exciting and unpredictable. So, as I say, don’t compare them: this is really about entertainment, but tell the players that it’s not serious and meaningful and I think you’ll be scowled at because you see how much it means to be representing their country and trying to win a World Cup.

In terms of extraordinary results, have you ever seen a game like the Zimbabwe-Bangladesh one, where the players are off the field, have shaken hands, then find out the game isn’t actually over yet? (In that game the third umpire determined the wicketkeeper had taken the last ball in front of the stumps, meaning it was a no-ball and there was still one ball left, giving Zimbabwe one last chance at victory – which they failed to take.)

I don’t think I have. That was amazing. I was actually at a function where it was on the big screen but you couldn’t hear any commentary. You could see what was going on. After what we thought was the last ball, we all thought OK, Bangladesh win, and you turn to start your conversation with the people at the function. Then after about five or six minutes someone goes, hang on, what’s going on here? You swing round and they’re all walking back out. Then to see almost an instant replay of the ball before. Quite extraordinary. I wonder what would’ve happened if he did hit the winning runs – it would’ve been crazy.

As a wicketkeeper, were you ever caught with your gloves in front of the stumps?

No, I remember being made aware of that as a youngster, that rule. I was always quite conscious of it. But you know, when pressure’s on, and anxious moments arrive, it’s easy to snatch at the ball and reach out in an over-zealous manner. It’s like, “Hurry up and get to me”. But I don’t remember ever being called for a no-ball for it.

No, you were too good a technician. That’s not the only unbelievable finish this tournament’s produced though – it’s had more than its share.

I don’t think I’ve seen a finish like the one in the India-Pakistan game. Anyone with half an interest in cricket knows the build-up to those games, and sometimes they don’t reach any great heights, but that couldn’t have gotten any higher.

Do you ever watch games and miss being out there?

I haven’t at all really. Probably the closest I’ve felt since I retired – and I’ve been out from full-time cricket, from the Australian team for 14 years now – sometimes when you’re covering day five of a Test match, when a team is out there in the field hunting down that victory: those were the best days. If it’s gone to day five and a result is on the cards, you know it’s probably been a pretty decent Test match. They were the most fulfilling days – you’re in the dirt with your mates and doing everything to try to achieve a victory. Then if you happen to get it, late on day five, they were the most memorable ones. But honestly, no, I haven’t missed it. I had my go, we had our turn, and it’s great fun to observe the current group go about it. I still love going to the cricket.

So on the other side, you’re not sick of the game either.

No, still love it. Love cricket at all levels. I’ll watch any cricket, and love going there and being part of the commentary team. The moment I’m not enjoying that I probably won’t do it.

Find out the next TV, streaming series and movies to add to your must-sees. Get The Watchlist delivered every Thursday.