Home » Lifestyle » A madness that spawned monsters, why Goya’s art still disturbs us

Goya had a black sense of humour but no one ever looked at his work for a laugh. We confront a world of cruelty and stupidity that no artist had tackled before and his work has disturbed every generation since.

To enter the exhibition Goya: Drawings from the Prado Museum at the NGV is not only to face the inhumanity of a repressive epoch in Spain, the callous exploitation of young women, and the pitiless punishment of sorcerers; it is to enter one artist’s mind where there is also a madness that, in his own words, spawns monsters.

There’s always a temptation to construct Goya as an early social justice warrior. He obviously sides with the poor and powerless, who end up as victims and live in misery and terror. He hates the institutions, especially the Church, that supported the humiliation and slaughter of defenceless ignorant folk accused of practicing witchcraft. 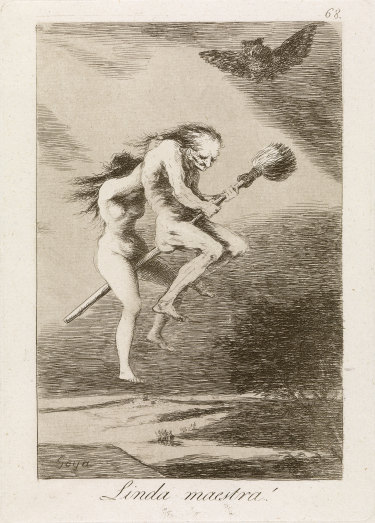 In a late work from the Disasters of War from 1810–15, Goya represents a cleric, identified with Pope Pius VII, balancing on a tight-rope. It bears the title: May the Cord Break. Goya evidently loathed the collaboration between the Church and the reactionary monarch Ferdinand VII, to the point of wanting the pontiff to die. Already in the Caprichos of 1797–98, he associated the Church with greed when he showed voracious clerics gormandizing without restraint in They Are Hot.

There are brilliant prints that can be construed as social protests including Who Will Untie Us? from the Caprichos. It shows a couple tethered at the waist, back-to-back by a tree, in great distress, apparently struggling against a giant owl that has descended on them. It could be an allegory of the inflexible institution of marriage but I read it as a wayward fantasy, where a beautiful couple is sacrificed to a flying behemoth. It must be something in their heads.

Horrible social realities informed Goya’s output but the enduring value of his images is more about how the mind produces figments that infectiously pass from person to person like a virus that infiltrates your head. How else to explain prints where the psychological torment is presented as a reality, like the sexual broomstick-flight of Pretty Teacher or You Will Not Escape and Don’t Scream, Stupid, where young women cower beneath flying demons? The works fathom a hysterical reality that Goya has sympathy for. 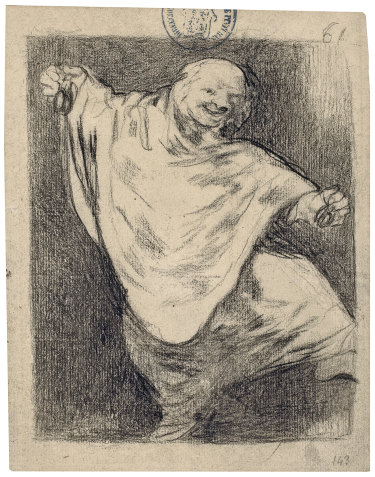 In a famous print from the Caprichos, Goya intimates that similar phantoms inhabit his own head. A man, apparently the artist, has slumped over a desk that reads, “The sleep of reason engenders monsters”. All around him owl-like bats swoop in menacing proximity, along with a glaring feline presence.

Goya’s later work extends these interests especially in the Disparates (or The Follies) where his habitually loose and moody technique acquires an even greater spontaneity. In scenes of almost random invention, Goya took macabre delight in the irrational, at times rightly deploring injustice but at other times enjoying the free-fall of order into the absurd.

What else explains his burlesque Phantom Dancing with Castanets, where a deformed scallywag spreads his body to the corners of the frame in a boisterous dance? Or people camping out on a branch while listening to a shady orator in Ridiculous Folly, or the scary carnivalesque Simpleton, or the feral fury of the dance in Merry Folly? 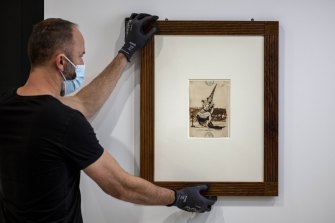 A Goya drawing being hung at the NGV.Credit:Wayne Taylor

A strength of the exhibition is that you can often compare the famous prints with their preparatory drawings, courtesy of the Prado in Madrid. They show an intuitive method that captures an otherwise fleeting idea, almost like a visual counterpart to the notes that you might keep by your bedside while holding onto the memory of a nightmare.

In the end, Goya is not a great artist because his times were so bad, because politics were corrupt or depravity riddled the streets of Spain. He gets into your head because he finds lurid content in his own; and as you’re drawn into his work by its mixtures of lust and confessional obsession and a dazzling technique, you see some of those ugly impulses in your own imagination that make you wince twice over.

Goya: Drawings from the Prado Museum is at the NGV International until October 3.