Home » Lifestyle » A looming crisis: Why Black men are most at risk of suicide

The suicide rates for men recently reached an all time high in England and Wales, with young men of Black African or Black Caribbean origin more at risk of taking their lives than white men.

Martin Leonard is 62. He struggled with severe mental illness for large parts of his life and was in a psychiatric hospital for 15 years.

Martin knows first-hand the additional weight that comes with navigating mental illness as a Black man. He was hospitalised after voices in his head convinced him to physically attack a friend.

‘Before my diagnosis, friends were trying to speak to me about my condition as I got worse, but I was adamant I wasn’t ill,’ Martin tells Metro.co.uk.

‘When I received the diagnosis, I felt alone and like there was a black cloud hanging over me. I kept asking myself, “why is this happening to me?”‘

Following the breakdown of a marriage, a failing business and recurring memories of suffering abuse while growing up in care, Martin began experiencing severe anxiety and was ultimately diagnosed with paranoid schizophrenia.

He credits his network of friends, social workers, mental health experts and his own determination were key to his recovery.

‘I was becoming even more paranoid in my everyday life. Emotionally, I cried quite a lot as I felt very vulnerable,’ says Martin.

‘The tipping point came when I heard a voice in my head to attack my friend. I had heard voices before and acted upon them as I felt they were controlling me and I had to do what they told me to do.

‘This time, I actually carried out the attack. I was arrested and that’s when I was put into a psychiatric hospital.’

Martin was first hospitalised at the age of 38 for six months in 1998 and then re-hospitalised again from 2002 – 2015. Now, he is sharing his story of recovery in the hope of helping others.

As well as the 2019 figures which revealed the worryingly high male suicide rates, the Nuffield Foundation also recently reported that thoughts of death were, on average, a third higher in ‘BME groups’ than in people of other ethnicities during lockdown.

Experiences of psychological or physical abuse, or bullying, have been around 80% higher. Fears of unemployment, financial stress and catching Covid-19 have only exacerbated preexisting issues.

The stats are incredibly worrying, as is the trajectory. The disproportionate impact of the pandemic that falls on Black shoulders – from the higher rates of mortality, to the higher likelihood of financial instability – means the next few years could see a lethal combination of increased stress, grief, trauma and discrimination within this demographic.

‘Young Black men are caught at the intersection between the current crisis and longstanding inequalities,’ says Kadra Abdinasir, head of children and young people at the Centre for Mental Health. ‘They are bearing the brunt, and the worst may be yet to come.

She adds that men from this demographic have been ‘overlooked’ in the pandemic response.

‘Even before the pandemic, they faced significant mental health inequalities and were less likely to have their needs appropriately met by mainstream mental health services,’ she says. ‘It is now essential that concerted action is taken to prevent the current crisis from blighting young Black men’s lives long-term.’

Martin says that when he was first unwell in the 1980s and 1990s, there weren’t any role models for Black people with mental health issues. It just wasn’t something that was ever spoken about.

As a young Black man, you tend to be left at the bottom of the list when it comes to accessing help

‘When you go into psychiatric hospitals, there is a large of percentage Black patients and even within the hospital setting, you find that Black patients tend to be man-handled more aggressively than white people.

‘As a result of experiencing this, it was difficult to overcome my paranoia and mental health concerns.’

Looking at routes in to mental health treatment, Black people are 40% more likely to access treatment through a police or criminal justice route, according to data from Mind.

Martin has seen how the picture of mental health is improving in the UK, which he believes is really encouraging.

‘We are tackling the stigma, there is a lot more mental health awareness now,’ he explains. ‘More Black people are now happy to admit mental health issues and are willing to come forward and receive the care that they need. This does make a major difference in how patients are able to overcome the psychological trauma that they felt was unmanageable previously.’

However, he says, there is still so much more to be done.

‘As a young Black man, you tend to be left at the bottom of the list when it comes to accessing help,’ says Martin. ‘This is not necessarily across the board in society, but is largely the case.

For Martin, talking therapy at the hospital was key to helping him understand himself and his mental health, helping to overcome his addictions and dealing with the voices he was hearing.

‘If it wasn’t for the psychiatrists, I wouldn’t be where I am today,’ says Martin. ‘If young Black men could access this sort of help from an early age, it could help completely steer the trajectory of their future and for those around them.

‘There needs to be some sort of online forum that is established so young Black people can talk among themselves, along with Black therapists to guide them.’

Martin is speaking at the ‘It’s Time to Talk’ workshops; an initiative launched by Find A Balance – a mental health support charity for Black and Minority Ethnic people.

Commissioned by Hackney City and Waltham Forest Mind Charity, the series of workshops aims to help young Black men address their mental health in a positive, supported and proactive way.

Resources like this are vital in normalising the conversation about mental illness among Black men. A susrprising number of young men are still struggling to find the language to open up about these issues, which is something that author Alex Holmes addresses head-on in his powerful book Time To Talk.

‘There is a crisis looming, and it is one that will be affecting all men because we are all struggling under the systemic pressures of what it means to be a man,’ Alex tells Metro.co.uk. 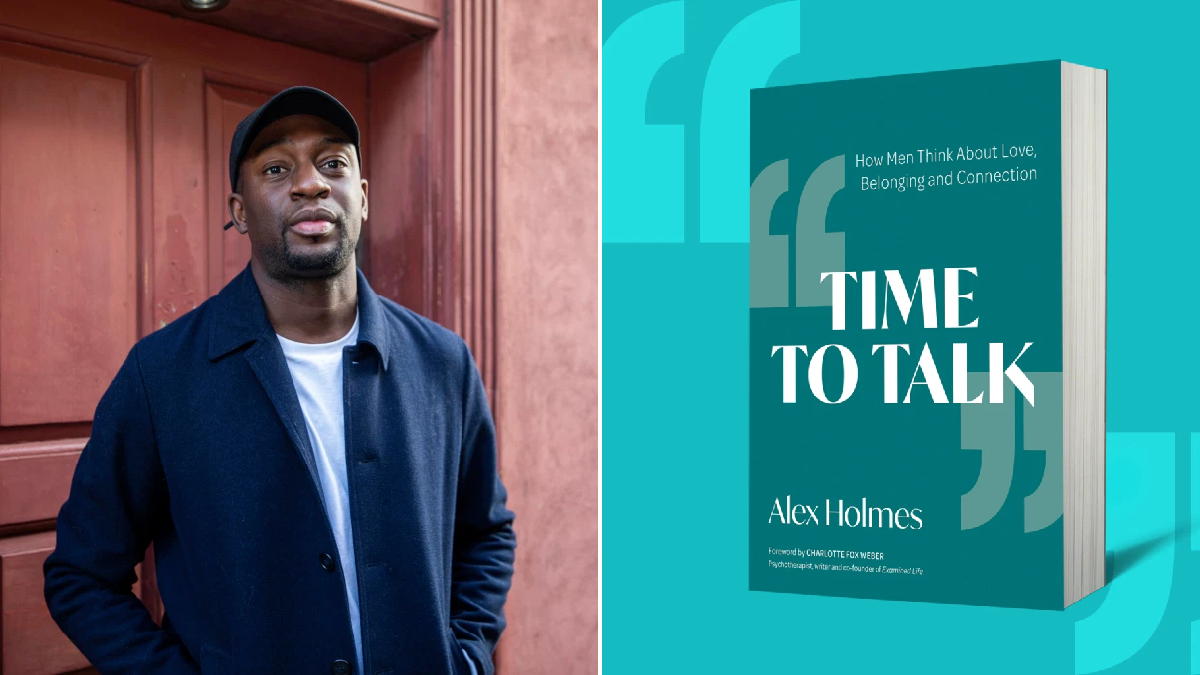 ‘The specific intersection of what it means to be a Black man, a Black trans and, or, queer man, or a Black differently-abled man, at this time is definitely impacting our mental health.

‘The systems are not in place to support us, and there are still many cultural stigmas (both intra-culturally and inter-culturally) that impact how we show up to the world.

‘So, yes, there is a crisis but it’s not brand new. It’s growing deeper, and we need to put a stop to it.’

Alex believes social media is a key factor in this. In the wake of the murder of George Floyd last summer, Alex says we can’t underestimate the damaging impact of witnessing so many Black lives lost in real time, or the long-term effects of living with racism.

‘These factors can cause quite a knock to their mental health, and with a lack of emotional awareness and emotional intelligence, it is challenging for these conversations to be had with the people that matter the most,’ says Alex. ‘Not to mention the inherent distrust of the system in any way shape or form for Black communities.’

Experiences of racism and discrimination also shape the ways in which Black men move through the world, says Alex. The repeated and relentless impact of being treated differently, worse, because of your race chips away at your mental resilience.

‘Black men have the privilege of navigating the world as men, but there is always the reminder that their life can be altered, disrupted, and possibly ended on a whim if they do not conform to what society’s role and place have for them as Black men,’ Alex explains.

‘While writing the book, I realised that we need to redefine two things. One of them being vulnerability, and the other being what we understand masculinity to be. It’s so much more than what we think it is.’

Looking ahead, Alex doesn’t have a simple or singular resolution to this growing problem. It is complex and multi-faceted. But he believes language and openness is the best place to start.

‘The onus isn’t on one thing, person or community,’ says Alex. ‘We need to have better conversations so that we can recognise what it means to be men who show up in society and create a safer world for women and children to exist and live a full life.

‘The buck stops with men taking accountability for actions, holding each other up when we falter and growing together so that we can recover from the traumas that we carry. And believe me, we are carrying a lot.’