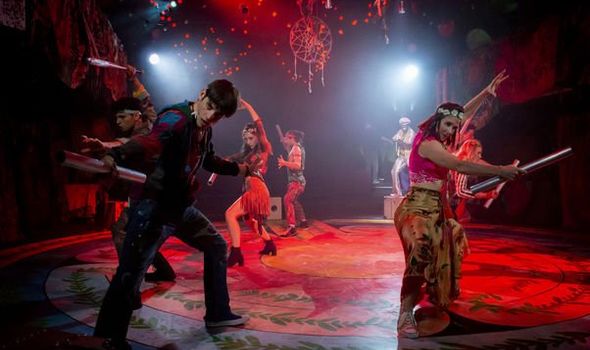 Inspired by events around him, Schwartz took the story of Pippin (Ryan Anderson), son of 9th century Emperor Charlemagne, and remodelled it for the new counterculture. Pippin’s problem, like many royal children since, is finding purpose in life.

With fewer therapists around in his day, the young man tries several different hats — warrior, playboy, political agitator — but just can’t get no satisfaction.

Steven Dexter’s production is rooted in 1960s nostalgia. Fringed jackets, flowing skirts, baubles, bangles and beads bedeck the eight-strong cast and the move to a bigger space from its origins in Vauxhall’s Garden Theatre gives it room to breathe.

The actors are supervised by Leading Player Ian Carlyle, who fills in ‘historical’ details and interrupts when the performers get bolshie – “You don’t have a song here!” “I do now.”

The costumes are tie-dye for and the performances sparky and enthusiastic.

Offbeat it may be but the balance of humour and drama is impressive as Pippin shows an unexpected ruthless streak and Schwartz ratchets up the tension when Pippin is urged to go out in a literal blaze of glory.

Harder and more serious than Hair (also 1967), this punches well above its weight.