Home » Fashion » Those Silly Chairs You Keep Seeing in the Park? They’re Lamzacs

Its manufacturer, Fatboy USA, calls it an “inflatable lounge,” but it’s not exactly seat-shaped. It’s more amorphous, a thicc blob of color that you can fill with air wherever you happen to be: at the beach, the park, your airport gate. The original version retails for $39.99. It looks ridiculous. Also, comfortable.

“It certainly has been a wonderful, beautiful, very successful collection for us,” Ms. Masters said.

The Lamzac — which means “sluggard” or “lazybones” in Dutch — was invented by Marijn Oomen, who in 2010 appeared on the TV show “Het Beste Idee van Nederland” (basically a Netherlandish “Shark Tank”) with the idea of scooping air into a bag. Two years later he began to sell inflatable chairs at music festivals, and in early 2016, the invention was acquired by Fatboy, a Dutch company, which holds a design and utility patent on it. It’s made with ripstop nylon, famously used for parachutes. 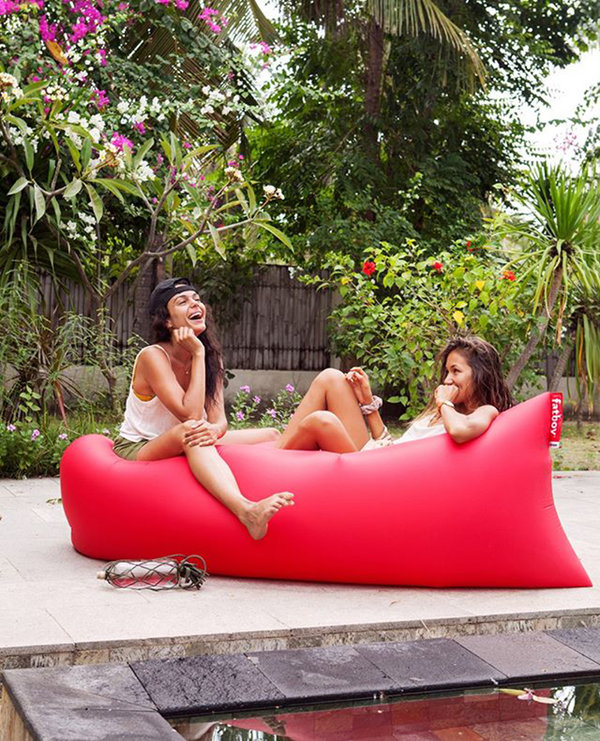 From the start, the demand was enormous. The company had to airlift new shipments of lounges to the United States from China every week.

“Everyone wanted it,” Ms. Masters said. “We had to use a lot of our resources to manage that business.”

No surprise that imitators, including WindPouch, Aerobon, the Cozy Bag, Dumbo Lounge and Chillbo (which sells something called a Chillbo Shwaggins), have been quick to introduce their own versions.

Inflatables are often thought of as a ’90s and early 2000s design fad, but they have come back into fashion. Levi Bedall, one of three members of Pneuhaus, a design collective that specializes in inflatable architecture and art installations, said that in the last decade, inflatables have shed their reputation for flimsiness. Mr. Bedall said he was taken with how affordable inflatable objects are, and how easily they can be packed up.

“This is one method of architecture that I can make right away,” said Mr. Bedall, who has an architecture degree from the Ohio State University. “I can’t build buildings out of concrete right away but can start making inflatables.”

In the years since its introduction, the Lamzac has thoroughly infiltrated public space, helped along by Fatboy’s collaborations with music festivals like Coachella and Bonnaroo and surfwear labels like Quiksilver.

The product has also spread organically on Instagram, where being on vacation seems to be a job for many people. The academics Brooke Erin Duffy and Emily Hund, who between 2017 and 2018 conducted a research project on #doitforthegram culture, said that the Lamzac was ideal for the photo-sharing app.

“The portability of it enables individuals to inject this consumer product into the usual backdrops for Instagrammable content: beachscapes, cityscapes, campgrounds,” Ms. Duffy said.

Ms. Duffy and Ms. Hund said that the Lamzac encourages a kind of social contagion, in which people see what others are doing on the platform and imitate them, taking the same sorts of pictures with the same sorts of objects in the same sorts of places. And because these colorful, inflatable lounge chairs clearly stand out in natural environments, their photos can easily creep into sticky social media territory: Is it #spon, or just a post?

“We all have the ability to turn ourselves into ads now. Some people enjoy participating in that and some people don’t,” Ms. Hund said. “And you know, then there’s the question of should we be compensated for this? Is this work?” If so, must be nice.

Jonah Bromwich is based in New York. He writes for the Style section. @jonesieman