AS anyone with any kind of dating app experience will already know, Tinder can be a bit of a minefield of creepy one-liners and unsolicited pictures.

But now one singleton has made it her mission to fight back against dating app love-rats by forwarding their, erm, compromising messages on to their girlfriends and wives. 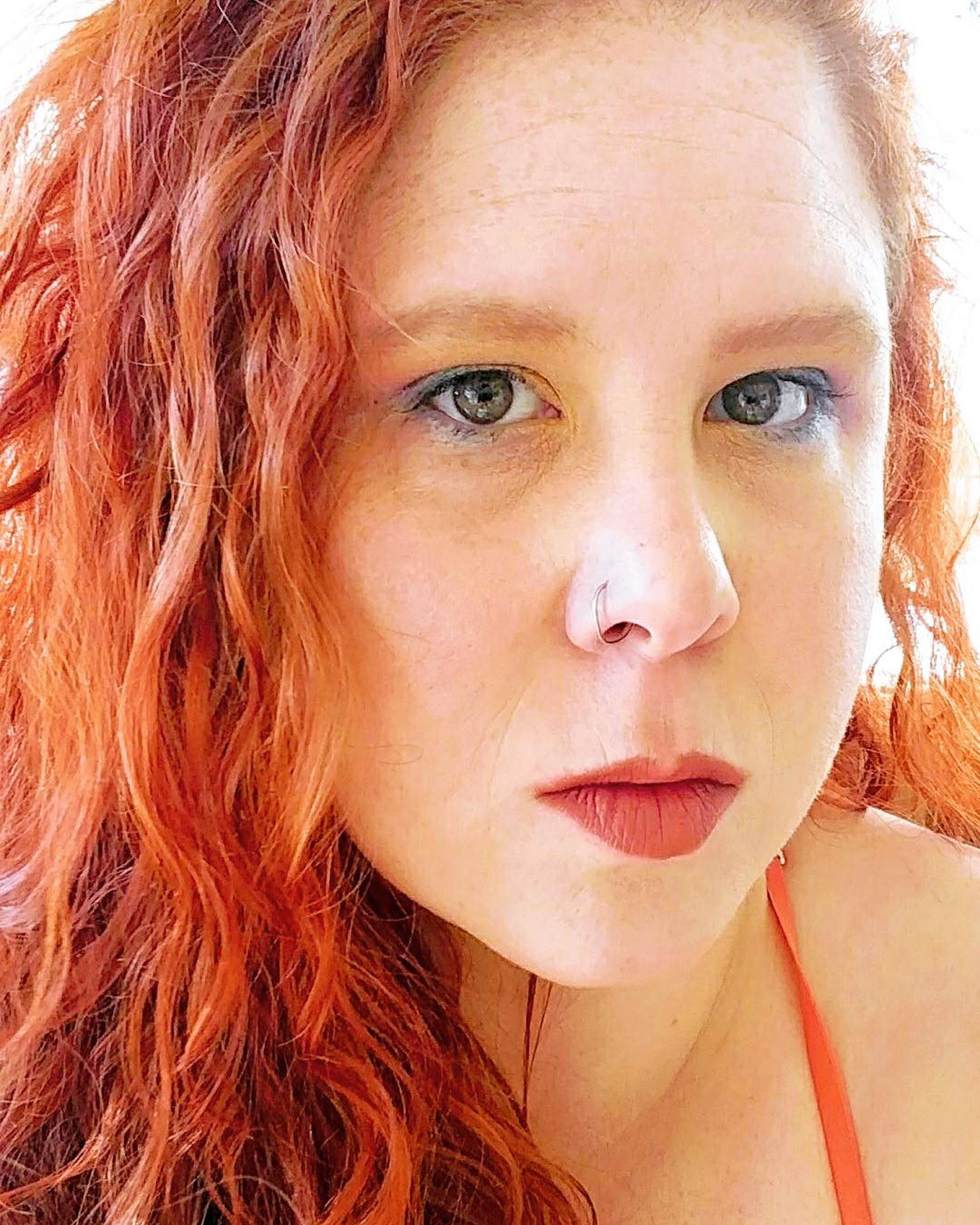 Single mum Erin Colleen, 34, from Washington DC, has been cheated on in several different relationships and is determined to stop other women from experiencing what she went through.

After downloading Tinder to get herself back into dating, Erin – who has a background in data mining – was horrified by the number of married men saying they were "looking for something discreet" in their bios.

Using her investigative skills, Erin then tracks down their partners on social media and informs them of what their other halves have been up to behind their back.

In fact, Erin is so keen to out cheating love rats that she purposefully swipes right on Tinder when she suspects her match might be in a relationship – and claims she can track down her Tinder match's other social media profiles in under an hour when she only has their first name. 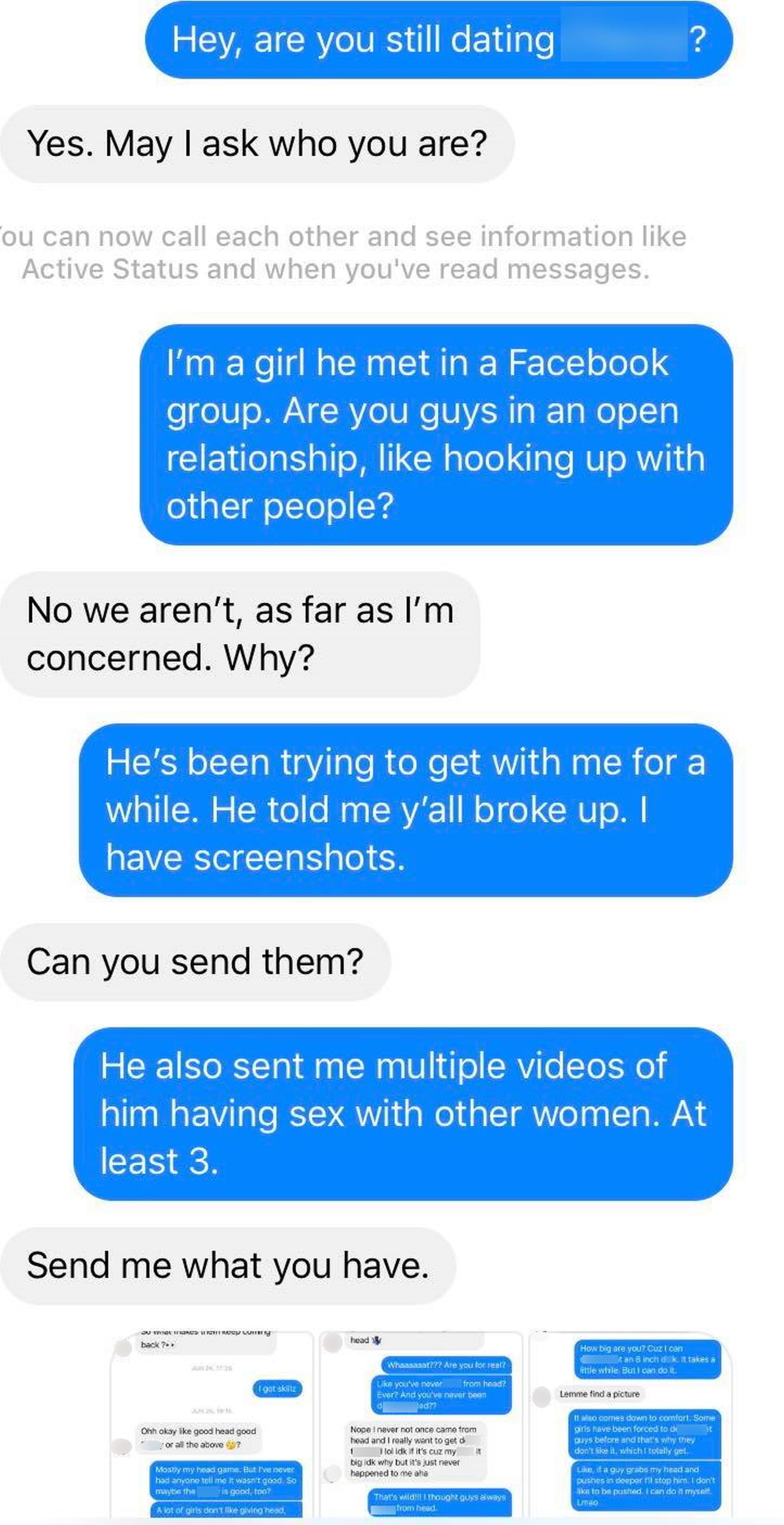 So far, the American mum has exposed five love rats – and although she claims each of women have been devastated by the news at first, Erin says are grateful to have been told.

She said: "I can't stand cheaters, I've been cheated on in the past.

"It was devastating to learn he'd been doing it right under my nose for years and nobody ever said anything to me about it.

"Whenever I see a profile that says 'married or 'looking for something discreet', I immediately swipe right to see if I can out the guy."

Insisting that she's doing it to "protect other women", Erin added: "I don't want any other women to go through what I went through. 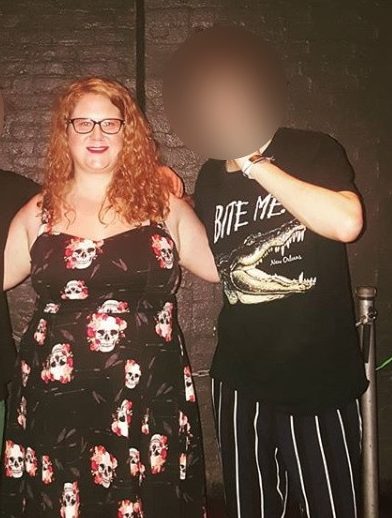 "Women are starting to really look out for other women, even ones we don't know, so if you want to cheat you had better expect it to get back to your partner.

After Erin exposed one Tinder love rat's cheating ways to his wife, the woman reached out to Erin and said: "I really wish there were more people like you in the world.

"I'm a nurse who worked 80 hours last week so we could go to Disneyland. Kind of ironic wanting to go to the most magical place on earth when something like this was going on back home."

Just last weekend, Erin outed to more cheating men she was chatting to on Facebook and Snapchat. 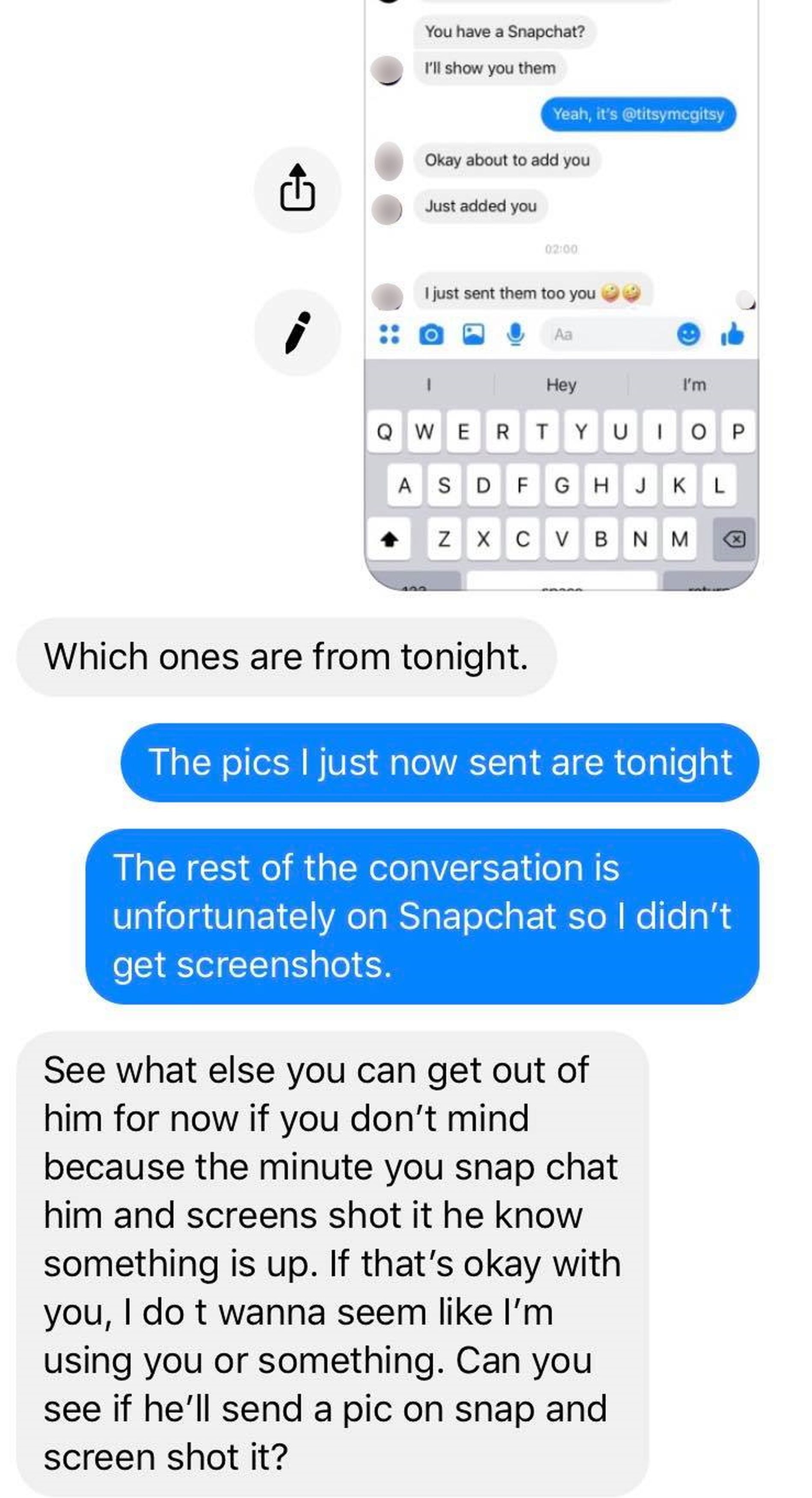 During one chat, Erin received x-rated pictures and videos which led her to believe he had been secretly filming his partner.

She said: "This guy messaged me a year ago and had been flirting with me on and off since. I noticed on his Facebook that he had a girlfriend.

"When I asked him about it, he lied and said they broke up but he hadn't changed his Facebook yet because he got  30-day ban.

"I knew that was a lie because he was messaging me through Facebook and you can't message when you've been banned. I messaged the girlfriend and showed her everything." 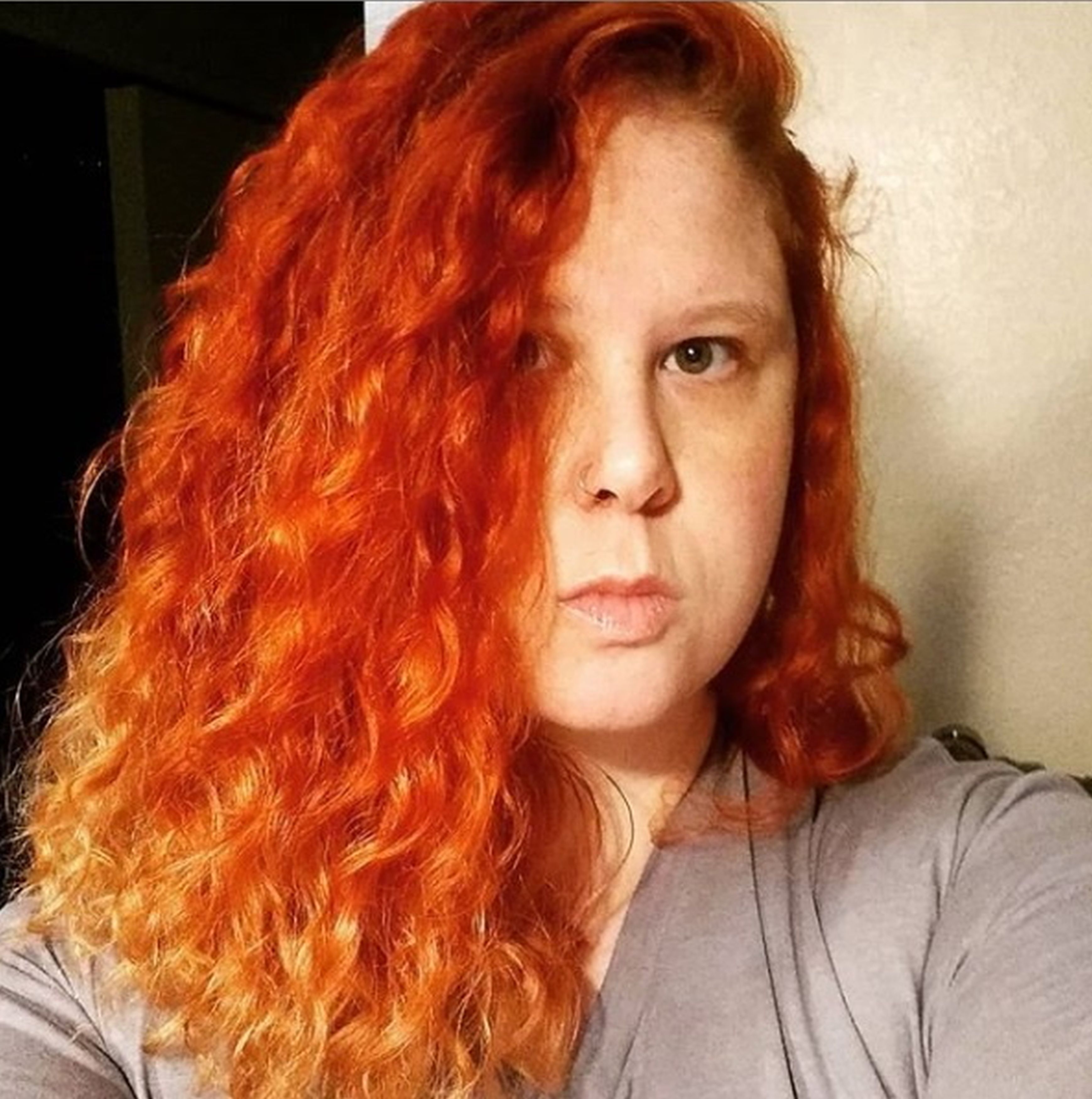 After the girlfriend confronted him with the messages, the love rat (unsurprisingly) denied everything and accused Erin of "trying to ruin his life".

She added: "I see right through men's excuses. An ex used to say that he was unfaithful because he was lonely. I used to feel bad for him.

"It turns out he was unfaithful long before our relationship had issues. These men are manipulators.

"They expect free emotional labour from women, especially their partners, but they still want to be able to fool around with whomever they want."

Thanks to her career in data mining, Erin claims she can hunt down a love rat's family in just one hour by searching their photos online.

Recently, she was chatting to one Tinder love rat for about a month but said in his profile that he was "married but lonely".

Divulging details of his relationship, the man's profile read: "We both work nights opposite to each other. 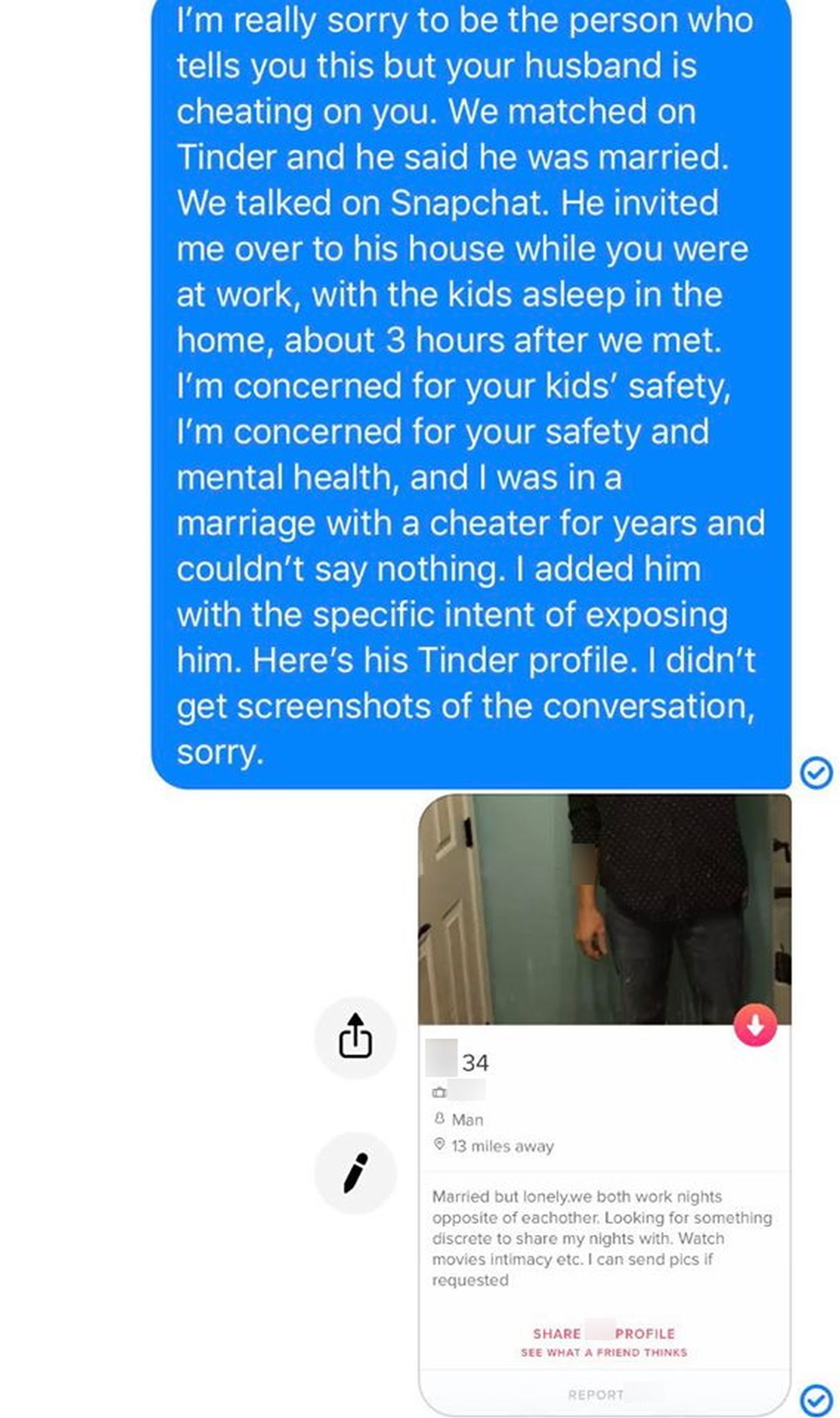 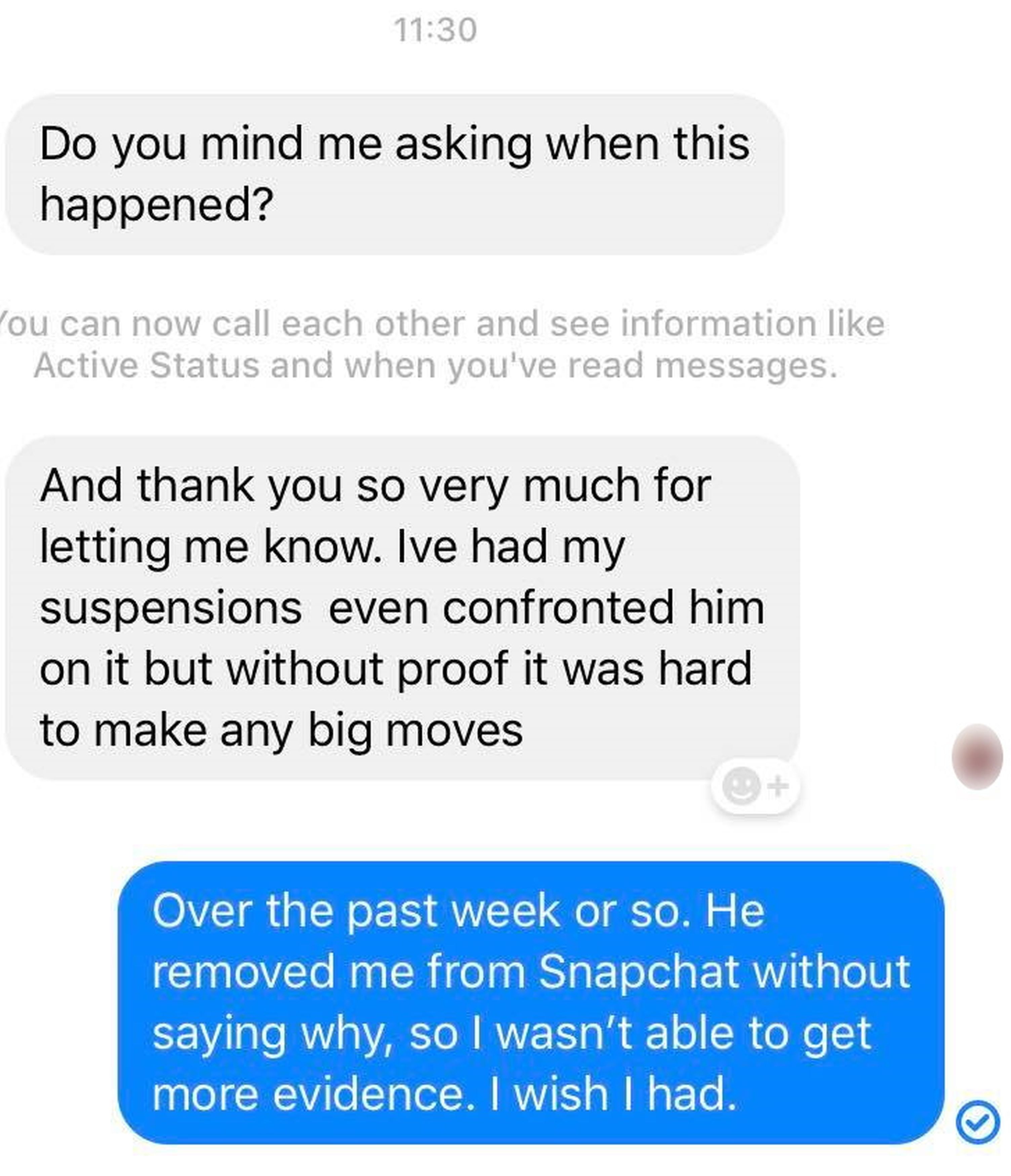 "Looking for something discrete to share my nights with. Watch movies, intimacy, etc. I can send pics if requested."

After the love rat asked Erin to come over to his house while his children were sleeping, she decided to do a little digging.

Within 60 minutes, she had tracked down the man's mum and wife who "couldn't thank her enough."

Erin said: "I told him I would feel kind of weird with his kids there, and he told me not to worry because they’re deep sleepers.

"Like, this man was willing to have a stranger come to his home while his children were there to have sex.

"As soon as my suspicions were confirmed I simply grabbed his name off his Snapchat – he didn’t even think about hiding it – and messaged his wife and mother."

The wife then told Erin that she had "suspected him for a while and had tried to confront him but didn't have any solid proof."

"She was very kind and thankful. I was expecting her to respond with anger or denial, but she didn’t."

For more relationship horror stories, a woman was left horrified after a Tinder match suggested they should contact her dead boyfriend via a Ouija board to get permission to have sex.

And this "unhinged" mum sneaks mushrooms into every meal she cooks for her daughter-in-law despite her deadly allergy.

Plus this single woman has found the "worst Tinder bio" ever as a lad creepily jokes "let me be your Ted Bundy".

3 things to do today

1 TRY: Burpees or jump squats at home Heading into yet another week of telecommuting? That is no excuse for

‘Out of character’: Burnt car clue to elderly pair missing in Alps

John Prine in Critical Condition After Being Hospitalized Due to Coronavirus

John Prine is in critical care. The 73-year-old country singer-songwriter’s official account provided an update on Sunday (March 29). “After

Calgary police are looking for four suspects after a violent assault in the Killarney neighbourhood last month. On Feb. 27

Trump says Harry and Meghan must pay for security