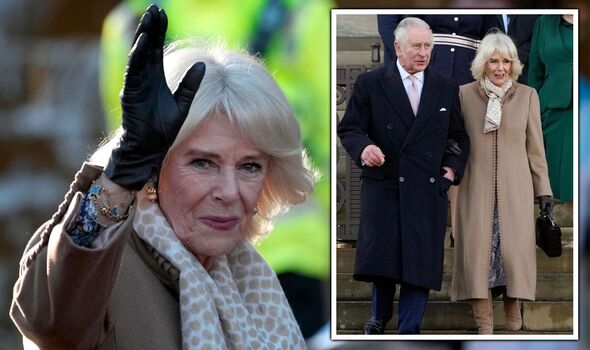 Queen Camilla was spotted arriving at Bolton Town Hall with King Charles where the couple met with representatives from the community. For the engagement in the north of England, Camilla was seen all wrapped up in a long beige coat and a white scarf.

For her Manchester visit, Camilla chose a very stylish long coat that she combined with matching beige boots.

Due to the cold weather across England today, the Queen Consort opted for a white scarf with a beige pattern and brown gloves.

She accessorised her winter look with a cute black handbag which was very similar to the ones the late Queen Elizabeth used to wear.

Queen Elizabeth was a fan of Launer handbags and it is believed she owned more than 200, her favourite styles being the Royale and the black patent Traviata.

It is reported that the late Queen used her handbags to communicate messages to her staff and Queen Camilla may now follow the same practice.

Royal historian Hugo Vickers explained that when Queen Elizabeth moved her handbag from one hand to the other it meant that she wanted to end a conversation.

“It would be very worrying if you were talking to the Queen and saw the handbag move from one hand to the other.

“It would be done very nicely. Someone would come along and say, ‘Sir, the Archbishop of Canterbury would very much like to meet you’,” he told People.

Spare: by Prince Harry, The Duke of Sussex

Prince Harry’s highly anticipated and revealing memoir, Spare, launches on January 10, 2023. Available to pre-order now on Amazon, shop to read the gripping story of his life growing up in the royal household.