Familiar Australian labels such as Zimmermann and Aje roll off the tongue and clothing racks when it comes to selecting spring dresses, but a new generation of brands is moving into the lucrative territory of romantic linens, puffy sleeves and floral prints.

Three designers with different aesthetics but a similarly inventive approach to vowels, Kivari, Ngali, and Alemais, are ready to take over the spring racing, wedding and brunch circuit waiting on the other side of winter. 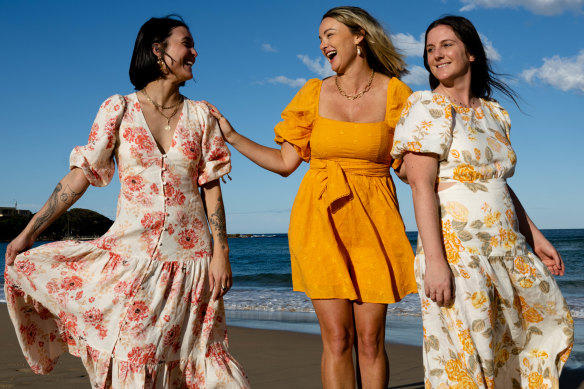 For Kivari, founded by radiographer turned designer Kristin-Lee Keysers, spring success has been a slow burn since starting with accessories at the Bondi markets nearly 10 years ago. Now the focus is dresses, with four Australian boutiques and their first shipment about to land at US department store Saks in October.

“It’s been a journey, and I have had two kids along the way, but people discovered us online during the COVID-19 lockdowns,” Keysers says. “During that time, when we were all stuck at home, people connected with the pieces inspired by travel. Since then, it’s been steady growth.”

“Customers respond to the hand-drawn prints and the effortless silhouettes, and it’s also an accessible price point.” Kivari dresses range from $179 to $349. “When it comes to spring people just want to feel beautiful.”

The label currently ships to 50 countries, with 20 per cent of customers in the US, which is a focus in the coming months.

“It’s an Australian brand because it captures the relaxed way that we dress, elements of the landscape and that relaxed coastal vibe. It’s the city meets the sea.” 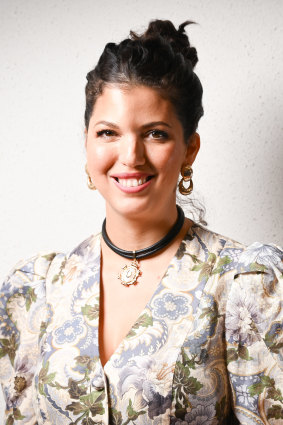 “I feel connected to the customers and their sense of purpose when it comes to fashion,” says Alemais designer and co-founder Lesleigh Jermanus. Credit:Eddie Jim

While Kivari’s spring bloom took 10 years of growth, Alemais has burst onto the market in two years, with co-founder Lesleigh Jermanus winning the National Designer Award presented by David Jones and the Melbourne Fashion Festival in July.

Along with a significant footprint in David Jones stores, the brand is already stocked by e-tailers Shopbop, Net-a-Porter and Moda Operandi as well as Harvey Nichols and Matches in London, with chief executive and co-founder Chris Buchanan, formerly of Tigerlily, Ellery and Bettina Liano, helping propel the rapid growth.

Jermanus’s background at Tigerlily and Zimmerman can be seen in the intricate prints with a strong Indian influence, which are utilised alongside dead stock for extravagantly tiered dresses, cabana striped minis and generously proportioned tunics.

“We want to avoid producing collections for the sake of it,” Jermanus says. “We think of individual styles. Whose wardrobe will this end up in? Are they having fun in this? Where are they wearing it to?”

Collaboration with artists such as Newcastle’s Annie Everingham and calligrapher Sam Pauletto keep collections fresh, without drifting too far from Alemais’s bohemian-with-a-budget aesthetics, with dresses varying from $375 to $895.

“I have been behind the scenes in this industry collaborating for 20 years,” Jermanus says. “I learnt all aspects of the business because I wanted Alemais to be robust. Now I get to be the one initiating collaborations with other artists. That’s exciting.” 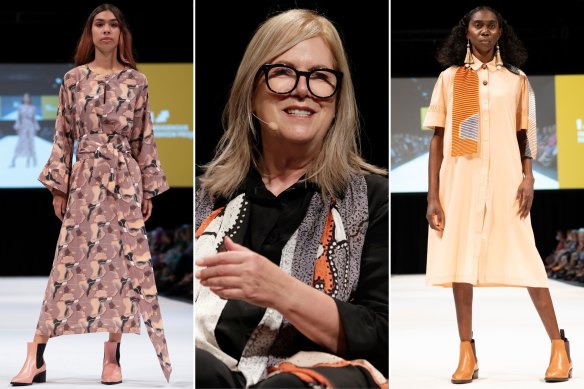 Another freshly awarded label is Ngali, which took out the 2022 National Fashion Design Award at the National Indigenous Fashion Awards in Darwin last week. Imagine if Prada designer Miuccia Prada visited the Northern Territory and you come close to designer Denni Francisco’s aesthetic, utilising the work of First Nations artists.

“Everything that we do as First Nations, we always do it collectively,” Francisco, a Wiradjuri woman and former owner of the popular children’s brand Billecart Clothing, said in her award acceptance speech. “When we can do everything that we can do to forge pathways for the people that follow us, that is what we are about.”

Dresses range from $295 to $395 and are sold through Ngali’s website but with Francisco now working with clothing chain Country Road for another 12 months with the award mentorship prize, expansion is expected.