How did this capsule collection for Closed come about?

There were two pairs of Closed jeans that I’d been essentially living in for the past year and a half: a medium-wash high-rise flare leg and a straight leg that hits, like, two inches above the ankle. I reached out to the brand on Instagram to express how much that I really liked the jeans, and then they got in touch and asked if I would be interested in pursuing a collaboration.

Closed provided a framework, which was incredibly helpful: We want two pairs of pants, a shirt, a sweater, a jacket, and one wild card. I thought about what I myself wanted, which at the time, it was really a uniform, a capsule of Closed clothes that I would be able to wear the whole winter. I wanted to embody a little bit of the festivity of holiday and also the pragmatism required of casual clothes, so we looked at different Fair Isles and sequins. And ultimately ended up with what I think is a pretty succinct capsule. Essentially, we made a version of my own pandemic wardrobe.

How has your style changed during this time?

You know, I don’t actually think that my style has changed that much, but I think I’ve become a lot more direct and focused on what I actually want to wear. Jeans were a central part of that. The other pieces were a denim button-down shirt, a collarless jacket, and a plain cotton turtleneck. I had a couple of cardigans, both of which were Fair Isle. And I was really jonesing for a pair of nice trousers. I found a pair from Closed that inspired and provoked the pair that we ended up creating together.

Tell us about the pair from your capsule: What makes khakis chic?

I wanted to create a pair of trousers that you would wear in the same context that you would a pair of jeans, but that read slightly more sophisticated. They’re high rise and have a slight flare with a big turned-up cuff and are cut from this really stiff cotton khaki fabric that feels a little bit like 1950s collegiate to me and tucks in really nicely with a sweater. 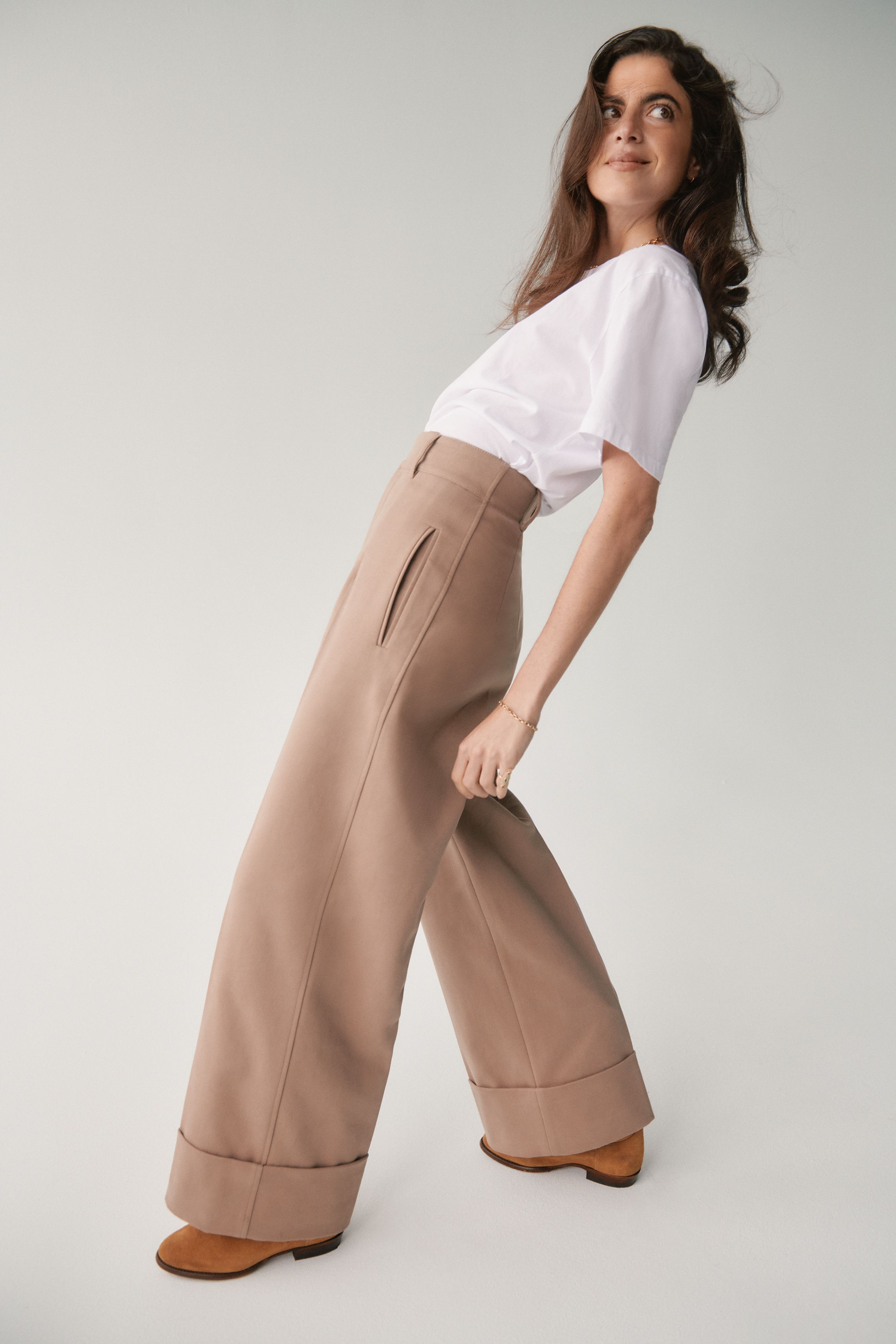 How do you improve on classics like a denim shirt?

I asked myself how I could make my favorite denim shirt a little bit better. I put it on and I thought to myself, I wish it was a little bit darker, a little bit heavier, and that it had some sort of a quirky feature—that’s what inspired the pearl buttons. I also wished that the sleeve was slightly cropped so that if I were wearing a bracelet, you’d be able to see it, even if I didn’t roll up the sleeve. I find there’s a really lovely contrast between a traditionally menswear silhouette and a traditionally feminine feature.

What makes a good winter cardigan?

Same thing: vaguely cropped sleeves. It should be long enough to wear with a pair of mid-rise jeans, but still cropped enough that if you want to blouse it over or potentially, like, half-tuck in the front, it’s not too bulky.

The balaclava bib is certainly the quirkiest piece in the collection—where did that come from?

Wearing a balaclava over my head over the course of this past winter was one way for me to inject pretty unique personality into whatever else I was wearing, which was often a gigantic black coat and blue sweatpants, if and when I went outside. I thought it might be really fun to create a balaclava that was also a bib. We made it in the same color as the cardigan, so that you could wear both together as a sort of matchy-match piece.

You cut the jacket a bit boxy. Is that to work with all the layering you have going on here?

Yeah. It’s long enough to keep you warm if you’re wearing it in the middle of January. But it’s not full length, which I actually think makes for a better option if you’re wearing jeans tucked into a pair of boots, for example. It’s got this cocoon shape on the sleeves with velvet accent and silver buttons.

How did you decide to support Win NYC?

When I was running Man Repeller, we were pretty involved with Win NYC, which is a sheltering program. I really believe in the work that they’re doing. One of my personal pledges over the course of the past year was that I was going to take to an old Jewish tradition that asserts that 10 percent of one’s earnings should be donated to charity. As part of this collaboration, I invited Closed to join me. So I’ll be donating my portion, and they will be donating a portion as well as clothing. I’m just really happy to continue supporting the work of the shelter. It’s a really important cause that helps women who are homeless and with children get back on their feet.