Heidi Klum showed off her amazing tight body while doing a sexy dance in a bikini. The mom of four busted out her incredible moves in a video for fans.

Heidi Klum wanted to make sure she helped her fans kick off their Monday in a good mood by doing a bikini dance for them. The 47-year-old model still has a killer body of someone 20 years younger, and donned a horizontal striped two piece Frankie‘s number for her Mar. 29 Instagram video dance session. Heidi showed off how her tummy is so tight and toned, and waistline so trim even after having four kids. The former model’s legs are still long and lean, and her figure looked nearly identical as to when she was a Victoria’s Secret Angel in the aughts.

Heidi didn’t need a pool or beach occasion to put on a bikini, as she could be seen inside of a sun-drenched bedroom in the light and dark blue striped number. It featured a triangle top and low slung bottoms with high a high cut hipline. The nearly-thong back showed off Heidi’s perky behind as she did some sultry twirls to the beat of sexy dance music with a heavy baseline.

The America’s Got Talent judge ran her hands through her long blonde locks as she swayed her hips to the tune. She made sure to show off the bikini from every angle via her super sizzling dance moves. Heidi posted the video to get her followers jazzed to get up to start their work weeks, writing in the caption, “Yiippppiii it’s Monday. lots to do, but first let’s DANCE.”

Heidi has been flaunting her incredible body quite a bit lately. She enjoyed the warm spring L.A. weather in a Mar. 27 IG photo next to her pool were the Germany’s Next Top Model host could be seen wearing only black thong bikini bottoms. She covered up the rest of her body in a giant, oversized straw sun-hat, so that only her long legs and pert behind were visible. Heidi told fans “Sun’s out, Bum’s out” in the caption. 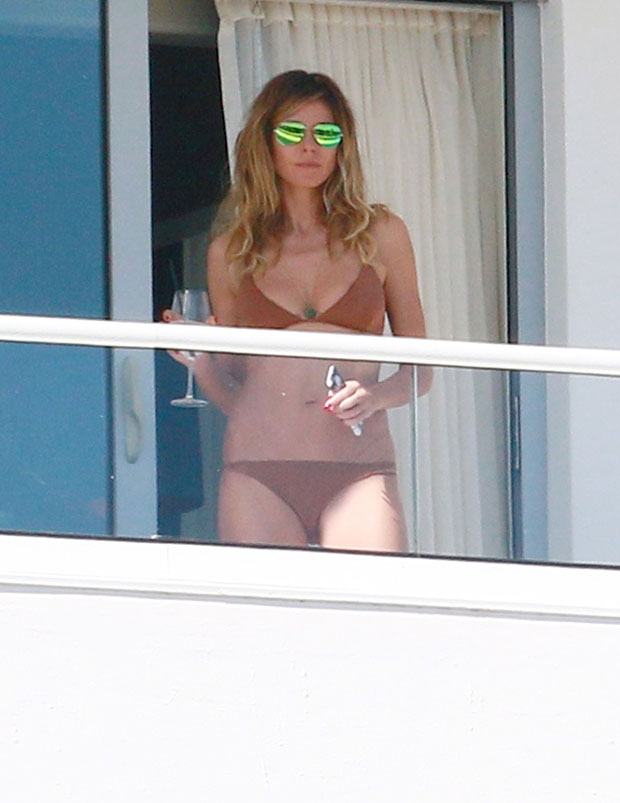 The former Project Runway host has also been showing off her top curves, as she gave herself bangs in black lingerie to please husband Tom Kaulitz, 31, in a Mar. 26 IG video. While first wearing a heavy white monogrammed bathrobe, Heidi brushed her long locks and said, “I just asked my husband what his favorite hairstyle is and he said long hair with bangs….after I just grew mine out for the last four months,” she said wistfully while in her bathroom.

Heidi stripped down her robe to her waist, showing off a tiny black bra as she gushed in a sexy whisper, “the husband should get what the husband wants.” After some delicate trimming of her bangs, she danced around in the lingerie and put some dark eyeliner on her makeup free face. Heidi then flirted at the camera by saying “This one’s for you baby” to Tom of her hair makeover.